Halmari, one main producer of Assam teas, sent an oolong version along with two orthodox versions of Assam black tea, one of which I've already reviewed.  And an Earl Grey; that should be interesting.  Indian oolong isn't a brand new concept but I've not tried many examples, and no specific versions come to mind (not a great sign).  As I only vaguely recall the versions I tried seemed a lot like a black tea, just backed off in oxidation level a little, not all that different than how that works out for Darjeeling first flush teas.  That wouldn't necessarily be a bad thing given how nice those can be.

Their description of this tea doesn't add that much to that but I'll cite it, since Assam oolong does seem atypical:

Halmari’s handcrafted tea follows the five basic steps of tea-making, however, it is carefully hand-rolled and oxidized repeatedly over the course of days. This unique method enables us to create beautiful complex layers of aromas and flavours from this tea.


Per World of Tea's processing chart the only minimum-requirement difference in types between oolong and black tea is that oolong is fixed at one step (heated to stop oxidation at one level).  Of course a lot of oolong is actually roasted too, and processing steps can vary, but I'm not going to develop all of that in this post.


The dry tea smells a little like a Darjeeling,  with orange citrus or maybe even bergamot scent. But it's slightly earthier, an interesting combination.

I brewed the tea Gongfu style (odd mentioning what that is, but just in case:  using a high proportion of tea to water, and multiple infusions versus only two or three).  These instructions recommend Western style brewing, and I did also try that method later, which I'll describe at the end.  The first infusion was more a rinse, but not discarded, a normal approach for me.

The taste is sweet with a good bit of fruit and complexity, but prepared light enough that I'll start the detailed review on the second infusion.  It's already clear that this really will be a type of tea that's new to me, not just black tea eased off a little on oxidation level, a bit different in character.

The tea is interesting.  The tie to Assam black tea related to the aspects is clear enough but that only seems to represent half of what is going on, and it's not based on a dominant malt aspect as Assam black tea tends to be.  It also shares a lot in common with Darjeeling, more so than any Assam I've ever tried.  I'd say second flush style since the astringency level isn't as light as in first flush, and since citrus / bergamot is so pronounced in this.  It's not exactly that, with a lot of the flavor in this tea expressed in a different citrus range.  It's still related to a type of orange, I'm just not going to venture which orange (blood orange, juice orange?; definitely not navel orange). 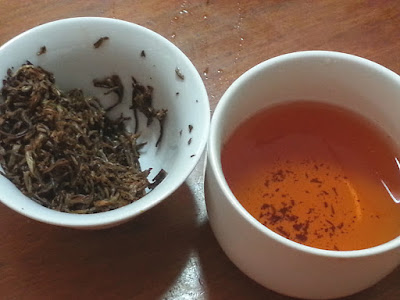 There is malt too, it just shares the space, only one part of what is going on.  From there the citrus range is next, then a black - tea related effect of oxidation, a specific kind of earthiness.  It's something I've been referring to as a resinous feel, which seems to relate to taste range that's a little towards pine.  There's a good but of mineral complexity under all that.

It's definitely novel, and doesn't remind me much of any other oolongs.  I'm guessing that this wasn't roasted at all, although not all oolongs are, and I'm not sure it would improve it anyway.  The oxidation level must be backed off that of their black teas but it's hard to notice that as a single cause input.  Oriental Beauty style oolongs are typically prepared at a relatively high oxidation level, up near the border of what would be considered black tea, and I guess this does share some commonality with that type, it's just not exactly the same.  It contains more bud material than oolongs typically tend to, or at least it seems to, so it ends up looking a little like some Oriental Beauty teas.  The fruitiness isn't far off some OB versions range (pronounced citrus is typical for those), and like those this tea has great sweetness, it just has a black tea-type earthiness underlying that which isn't common to those, maybe except in more oxidized versions nearer to the boundary for black tea.

My description so far hasn't done it justice but there is a sweetness and lightness to the tea, offset by the complexity and bolder flavor range.  It's true that I'm expressing a contradiction, but there is a complexity to the experience beyond individual aspect input that is hard to pin down.  It's definitely not as light as lighter / "greener" oolongs always are, or even as roasted oolongs go, but it's not as heavy, earthy, or astringent as black teas.

For the last infusion I went over 30 seconds and it was just a little intense;  I'll back off that.  Prepared on the light side this tea really shines, bright with lots of fruit, lots going on.  The feel isn't even thin, and brewed strong--what would be normal strength for other teas, at least related to brewing time--that feel might be too much, along with the flavor not being as positive.  Using the same parameters as this for the Dian Hong (Yunnan / Chinese black teas I tasted yesterday, at least related to when I made these notes) those black teas wouldn't taste like much, especially the two leaf-type versions (versus the one bud / gold tips version).

Part of the taste range is back at cedar / redwood, matching the orthodox black version I tried earlier, but it's layered along with the rest in this.  There isn't that much common ground with light rolled oolongs to talk about,  or with Wuyi Yancha or Dan Cong styles.  It's closest to Oriental Beauty, as I'd mentioned, but it seems just as close to Darjeeling second flush tea as well, sort of in between the two.

The malt aspect is different than in Assam black teas.  It's still in a malt range but beyond being only one flavor contribution among others instead of dominant the effect is lighter, and the aspect itself different.  I tend to describe malt as spanning a range of earthier and heavier flavor,  like aged rusty iron pipe, to being much softer, lighter, and sweeter, more like ovaltine, closer to cocoa, or more like the original sense of a fermented grain.  This might be closer to the middle now, still a bit towards the heavier side, but less so than as expressed in Assam black teas.

The fruit effect transitions some along later infusions, but still in a similar range.  It's becoming lighter in character and perhaps more complex rather than less.  It's at a place where interpretation of individual elements could vary quite a bit, but then to some extent that would have been true of the fruit and earthier aspects in earlier infusions too.  It's slightly wood-like, but it's also picking up a touch of root spice complexity.

On the next infusion I went a good bit longer, over a minute.  The tea is brewing out, fading after a good number of infusions, but the aspects range is staying consistent, and it's still possible to brew with that more intense,  heavy-earth, thick feel.  It comes across as slightly dry made that way.  I'll stretch the tea to brew another infusion or two, or it would work to try and get the last out of it by trying cold-brewing (putting it in the refrigerator with slightly warm--but not hot--water, overnight or for at least 8 hours).


Whenever I'm brewing teas Gongfu style (using that tea proportion and timing) for types that would either typically be prepared Western style, or I think might do better that way, I try to check results making them using both processes.  And I did that for this tea.

The results did seem similar.  Again this tea reminded me a lot of a second flush Darjeeling, not that far off a black tea style related to oxidation level, but a good bit fruitier than most tea types tend to be.  The muscatel was swapped out for other orange citrus range to some extent, and the oxidation level and subsequent malt / earthiness / astringency was subdued, but it was definitely still along the same line.  It did well related to using that approach; it was easy to make, and provided plenty of flavor, even though I really did use a light infusion proportion compared to how I generally make teas.

This tea is soft enough that it would work well across a range of infusion strengths.  There is no notable astringency to brew around, and just enough earthiness and structure to give it a bit of feel, perhaps a bit softer than it might seem it would be given the flavor range balance.  Related to overall balance and the "clean" nature of this tea, there is a subtle way that teas come across that shows them to fit somewhere on a range.  Let's express that as ranging from flawed, to decent tea, to instead really good, and at the highest end of that spectrum something exceptional.  This tea is pretty far towards the more positive end of that scale.  Some teas can come across as very subtle and sophisticated, and also intense at the same time, as better Dan Cong can, and this tea is a bit more along the lines of a conventional tea tied to that scope of effect, similar to how better than average Oriental Beauty oolongs tend to come across.  The flavors aspects set is nice and unique though; all in all a very nice tea.

Typically it's not a blogger's place to mention cost and value related to tea but per my take it would still make sense to buy this tea at twice the listed price, with some teas of comparable quality and overlapping aspects range selling for more than that.
Posted by John B at 11:40 PM