I've been meaning to get back to making a masala chai and a Christmas tea blend, so to clear through both I combined the themes.  This also contains a touch of bitter orange marmalade to fill in the spice range with a little fruit but the title seemed wordy adding it.

I've done Christmas tea blends before, and talked through what that's all about quite a bit.  Two years ago I did a fruit and spice blend, and last year's version went a bit further from the basics (black tea, orange citrus, and cinnamon) to include vanilla, cacao nibs, and black cherry jam, so based on chocolate covered cherries.  It was nice, just a bit removed from a typical dry tea and spice blend.

This year I didn't put the advance thought in and prep was mostly limited to what I had around.  That actually came up as both a positive and negative factor in the outcome. 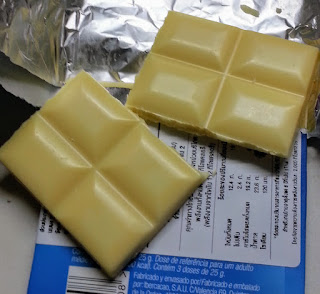 
I did have to buy the black tea for this; funny there was no CTC tea in the house.  I think my wife picked up a couple of free tea bags in a hotel stay once but I went ahead and bought some loose black tea anyway. 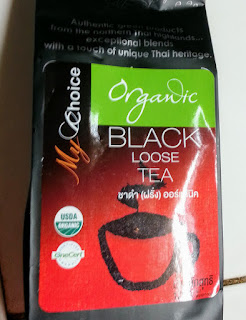 I used all dry spices; spice-rack versions.  If the spices are relatively fresh that's fine (not on the old side, I mean, anything in jars isn't fresh in the other sense), since spices have a pretty good life-span.  Flavor dropping off is one thing but after a couple of years they really can pick up a mustiness.  Ginger is typically easy to use fresh, since we cook with the root here, and it's even easy to find back in the US, but we seemed to be out.  I think the powdered ginger was the oldest of the spices and did contribute a slight mustiness.  Luckily the proportion of ginger was quite low in this version, something I'll get to more in the next section.

I would expect that black cherry would be nice for the fruit balance, or orange peel for citrus, but bitter orange marmalade was the closest thing on hand.  I considered squeezing in a bit of fresh pomelo juice (Asian grapefruit), since that was on hand around, but didn't expect it to work as well.

White chocolate was sort of a gamble.  I wasn't sure the texture would work, but then using real vanilla bean (in the past) does contribute a really thick, creamy texture to spice and tea blends, which is still ok.  Adding a touch of salt gives blends balance.  I'm not sure it changed much but I went with a dash of black pepper for this version, which isn't atypical for masala chai, I just don't like peppery chai.  Palm sugar isn't that different than a natural brown sugar; it was really just what was around.


The blend was mostly black tea.  Clove was heaviest after that, with this version light on ginger.  There was a good bit of chocolate, nearly as much as in a Hershey bar, but not enough to make the drink into a tea flavored hot chocolate instead of a chocolate flavored tea.  I didn't measure those, which leads into an aside I've been meaning to mention, and probably have already covered, about not sticking to well-determined proportions or parameters.

It comes from an approach to cooking.  I taught myself to cook in my 20s, based on my mother's cooking (which is quite good, mainly traditional foods back in Pennyslvania), and on a partial study in making dorm food in college.  Part of my approach was to never, ever use recipes, except maybe for something like chocolate chip cookies--those are touchy.  It was about the process as much as the outcome.  Funny that just came up in talking about making tea; you can probably imagine why.  People get into the ceremonial aspects of that, or see it as some sort of Zen practice, with the Japanese tea ceremony based on that sort of thinking.  I could be more careful about using ideal parameters (I am an engineer too; I get it), but then it becomes about optimization, not the experience.  For me winging it is part of an organic process, and experience limited natural variation is too. 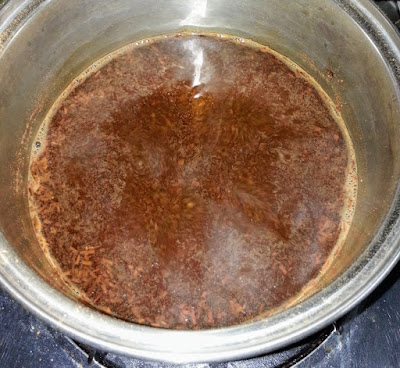 So back to that blend.  I mixed the ingredients and simmered for around 15 minutes.  For more whole spices I'd probably go with at least 20 minutes, but that's fine for finer processed versions.  Whenever you taste such a mix without milk it seems like you've completely ruined it, but adding the milk swings it all into a reasonable balance.  It's probably more typical to simmer along with the milk, and it's my impression that the milk does actually cook a little, changing the flavor, but this time I didn't.


It worked!  Often the first go at something novel really points towards how to get it right the next time instead, but this balanced well, and was nice.  The chocolate fell into a nice relation to the spicing, and the levels of all of the flavors worked out well.  Clove was strongest of the spice elements, but they all mixed so much that no one element was really pronounced over the others.  The marmalade folded in so well that it was hard to notice it even had any citrus aspect, but I think it probably supported the other flavors more than was evident.  The texture was fine, a little thick, but then ordinary masala chai tends to seem a little thick too. 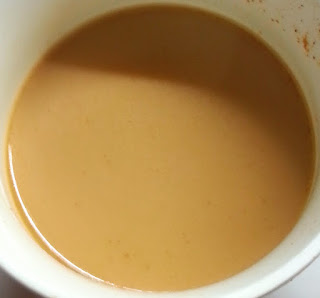 It was a bit close to hot chocolate, of course, really in between a masala chai version and that.  It worked well for me, but I wouldn't want to drink either of those things too often.  It's a lot easier to review; it tastes like those ingredients.  It would match well with cold weather but it's in the mid 20s here (C; probably up to around 80 F now, cool for us in Bangkok but not cold weather).  I made enough to have two very large cups with breakfast, and judging from the amount of soaked tea and spices I was probably good and dosed with caffeine from that.


Part of the point was trying something new, and part was also about encouraging others that making tea blends is possible.  You don't just need to rely on Teavana or David's to hand something over, and really don't need to go find whole spice versions to make a costly tea blend either.


I'd think lots of things might work well for this holiday blend theme, lots of which I've seen in review posts about them:  pine needles (more on using those here and here), peppermint candy, etc.  It might be cool to try and figure out how to integrate nuts, or other things that wouldn't typically go in a tea blend, cognac, or egg nog, whatever comes to mind.  At worst a batch would be awful, so the time and ingredients would be wasted.

Messing around with the tea input would be a natural variation.  I often use both CTC black tea and a mid-range quality orthodox black version (if I have both around), but an aged shou mei might fold into spice flavors just as well, or maybe better if you could balance the richness and subtlety well.  Smoked tea (Lapsang Souchong) has blending potential, but you know how it goes with those, finding a good one and getting the balance right would be tricky.

It starts to go a bit far but a Hunan brick tea might have interesting potential, keeping the spice a little lighter in that case so the unusual nature of that tea would have a chance to shine through.  One of those with a little cinnamon and nutmeg, dried orange peel, apple, and some dried fruit (raisin or date) might be great.  Crazy spicing like rosemary and sage might work for a different version, in the right mix.

Or just mixing black tea, cinnamon, and dried orange peel would be great, I'd think.