Pre-travel blogging: off to Russia soon

It seems odd writing about travel before traveling.  I've done it before, related to an online search for sources of tea (planning to visit both Korea and Japan), as much about ways one might approach that as to the references.  Since that's been 2 1/2 years I forgot how similar this current draft is to that post; it's a bit redundant, really.


The background:  we'll visit Moscow, St. Petersburg, and Murmansk, starting next week.  Of course I don't plan to even consider tea shopping up at the edge of the Arctic circle.

As an online friend mentioned it would be helpful to have shops you want to visit "starred" in Maps before the trip, but how to go about finding those places?  Google search "tea," obviously, but beyond that there are interesting and indirect ways to look for leads.  Ill go through some options in this post.

First I'll point out the obvious:  I'm not going to Russia mostly to check out tea.  It was my wife's idea to go there to see the aurora borealis (northern lights) and she thinks that Russian culture would be interesting.  I think so too; both should be amazing.  Ever since that unfortunate Cold War it has seemed like an interesting place.  I won't do much with a tea theme there but that didn't stop me from looking into the subject over the last few weeks.


Since the idea was to talk to people, and beating the bushes was part of the intent, the early round of looking into tea shops leads didn't include this.  Of course it works, and standard Google-search alternatives like the Moychay shops get mentioned that way too.  It's just not as easy to click around and tell what individual shops and products are like as it is to hear that from someone.  At best a link-listing of "best tea shops" might turn up and then you could almost stop there (just add those to Maps as stars, since things can get a bit hectic "on the ground" during vacations).

Language can be a problem, in some countries, and English search won't work very well, or Maps labeling based in English.  I'm not sure how that plays out in Russia; they don't speak a lot of English, per my understanding, but one would expect them to expect English-speaking tourists.


I asked around in a FB group I'm an admin for, International Tea Talk.  This wouldn't be a natural second level to try for everyone, but since I'm into tea groups it was.  Really just asking in a couple isn't enough; using search functions makes sense to catch if someone asked the same thing in the past.  That could run a little long, to do in very many places, but then someone could also spend a day paging around leads from Google search if they really wanted to.  A chance contact turned up the Tea Magic Shop vendor, and Sergey (the owner) seems nice.  If someone on your FB friends list is a Russian who is into tea that could shorten the process, and one of two Russian tea vendors I know was really helpful.

Related to getting help online, I go back and forth over how much to credit or mention people who pass on input in these blog posts.  Since checking on their preference is problematic I usually only reference online (public) statements, or ask permission when an idea or discussion quote is very useful.

Trip Advisor is great for looking up hotels or lists of attractions, but there's a travel themed forum that can also be very helpful.  Forum participants might blame you for not using a search function if the same question tends to come up often, or for not looking at the FAQ section, but you can still just type it out anyway.  In online groups and that site I just tune out questions like "what should I see in Bangkok?," unless I feel like adding something.  The short version about Bangkok:  temples are cool here, and Thai food can be nice.

Asking in the Trip Advisor forum worked; people with varying interests in tea made good suggestions.  I tried in an Expat forum and it didn't work, really.  If wasting time at it is of interest someone could look up and ask in a dozen different FB groups and various expat forums, and eventually the right person might see a post.  Of course checking again and again on all that would be tedious, and who knows which of those would or wouldn't use alerts to help support that.

One thing became clear in that discussion, even based on only limited input:  Russians don't drink all that much Russian tea.  Most of the people I talked to weren't clear that it even exists.  I like to check out shops and preferences in local places we visit but I've been a bit spoiled for going to main producer countries (China, Japan, Taiwan, Vietnam, Indonesia).  Not only is tea widely available in those places--not so much in Indonesia, better versions, but in the rest--it's also possible to try as local products.  If I find good Wuyi Yancha or pu'er in Russian shops that will be interesting, but I already know where to get those teas.  Still, some of the input was interesting, as this comment was, following mentioning the standard chain shops there:


...in St.Petersburg tea (and coffee) chains:


They all have stores in the "tourist downtown" area so you'll probably stumble across one or another. But like you've guessed and most posts here said you'll find either commercial teas or from China/Japan/etc. In Soviet times we used to have at least two famous brands of Russian tea: Три слона (Three elefants) and Бодрость (cheerfulness) but they are gone long time.


One likely problem for this scope is that a tea blogger in Russia would write in Russian.  Automatic translation works but the results can be choppy and unclear.  My favorite US tea blog, Steep Stories, focuses on looking into teas from out of the way places, and he's reviewed a number of them from Russia.  The next problem:  that's going to work well for ordering a tea produced in Russia (and I found a great online lead using that approach), but not so well for shops where someone might go.

I turned up nothing for tea blogs based out of Russia anyway, although this US based version post did discuss what a Samovar is: 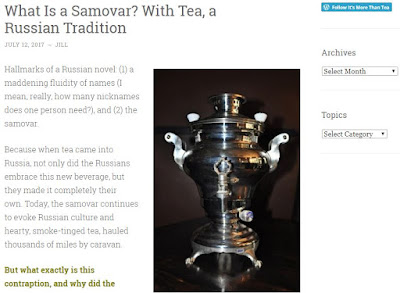 Using Google Translate to convert "tea blog" into Russian and searching based on that probably would have been more productive, but then I would definitely need to read any of those identified through automatic translation.


Finding pictures of tea shops is actually a really promising approach.  People look for public exposure there, and use different tags, but this kind of approach also really takes some doing.  At some point it has to be about how pleasant the messing around is instead of how productive.


I didn't get far with all that.  There are a half-dozen tea shops starred in Maps in Moscow and that one citation covered what turned up related to St. Petersburg.  Time spent digging through groups didn't get far; I might have added a few shops to a starred list beyond Google search results.

It's funny how there's usually one shop you really should check out, based on a close match with your own interests, and it's a bit unproductive to find out about it after you finish the trip.  I found some great shop options in NYC on a visit through online search, but later group discussion turned up one that was probably better, not so far from our hotel, that I didn't know of to visit.

Since this trip is more about seeing the Kremlin and aurora borealis than tea I won't mind so much if I barely get started on the subject there.  It just wouldn't make for much of a follow-up blog post talking about "not finding any tea in Russia."
Posted by John B at 1:35 AM