Presenting an introduction to tea at a CultCheers event 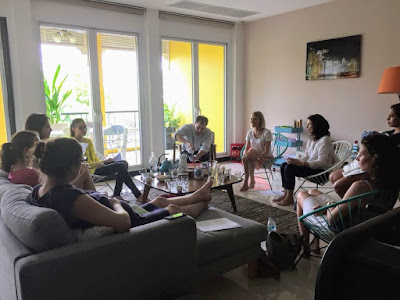 I presented an introduction to tea at a recent CultCheers event, a pilot version of their function format.  It was really more of a small informal discussion, a very nice context, during which we tried some teas.

There isn't much more to add about the event premise.  It struck me as a cross between a meet - up function and a TED talk in the early discussion, and it worked out like that.  The idea was to have a subject expert discuss a topic, supported by a host arranging an informal meeting place (with a video explaining that here).  It's odd assuming the role of a tea expert but I have given the subject some thought.  In later forms of the events there would be some degree of expense sharing but in this pilot version it was free to participants.  I presented at a Random Thainess event last year (described here) that wasn't completely different, just with a main running theme focus (Thailand), and based on multiple short presentations, with events always in the same location.

We tried a Yunnan black tea (a Farmerleaf sun dried Dian Hong), a 2008 shou mei cake, and a 2014 Tae Tea / Dayi 7542 sheng pu'er.  It seemed odd not including oolong but the idea was to try really novel teas, and rolled oolong is what they make in Thailand, already available in lots of places, and Wuyi Yancha or Dan Cong would be a little touchier about brewing parameters.  Those teas we did try could be prepared Western style, without close tracking of timing, except for the sheng, and that worked for demonstrating Gongfu style brewing instead at the end.

The questions and discussion were great.  The participants had varying backgrounds with tea but many raised some great points, which helped move the format off being more like a lecture, allowing for an organic form of jumping around within sub-topics.  For example,  someone asked if a short initial infusion really can decaffeinate tea.  The short version: no; the caffeine infuses at about the same rate that flavor does, with the specifics in a table in this post about caffeine in tea.

It makes it easier explaining tea background and specifics in person, related to questions and other people's prior experience. That could have went another hour.  Related to that I'll add some additional comments for points I might have expanded on a little more, after showing some event pictures here first.


Extending some of the discussion ideas

I won't try to explain what we discussed, but I will add a bit to some of the ideas here, about the next thing we didn't get to across a lot of the scope.


Tea storage:  we talked about how tea storage is important, how some teas are more sensitive to losing flavor (especially green tea), and why zip lock bags really aren't a good alternative.  Related to buying tea stored in large jars in a shop, I mentioned in this post about shopping for tea in NYC's Chinatown how I would gamble on whether some more durable types could hold up to that, especially rolled oolong, or even loose white tea.  Pu'er, other hei cha, and compressed white teas improve with age, so the time could help, and some air exposure should be fine.  Some black teas would fare better than others,  especially sun - dried blacks.  I don't really drink much jasmine green tea but the compressed ball shape could help those do better than loose green tea (dragon pearls, or whatever they call them).

Other references:   there's a lot about tea out there, but as we discussed trying teas is the thing, not reading about them (it just helps knowing they're out there to find them). A section in a beginners guide post covers other references, and a post about direct sourcing covers some vendor contacts.


Oolong:  it's odd we didn't get to those, since to me oolongs are among the best options for people getting into better loose tea, and personal favorites.  Rolled oolongs, which are produced in Thailand, are easy to brew (or hard to screw up), generally inexpensive, and ok across a range of quality levels.  Oriental Beauty is a Taiwanese type that tastes like citrus, bergamot, or cinnamon spice, more oxidized so closer to a black tea than lighter oolongs, which also turn out well brewed in different ways.  Wuyi Yancha and Dan Cong are a little trickier to get the best out of, and I'd use Gongfu style brewing for those, but both have a really interesting flavor range (and feel and aftertaste; later on one tends to not only focus on taste). I wrote a Quora answer once about what different oolongs taste like, which is impossible to fully answer, but a couple of paragraphs does make a start on that.

Cold brewing: I'd mentioned this, but maybe didn't clarify exactly how this could work for using the last of a tea in the rush.  All those teas we tried on that tasting day really weren't finished, and all of them could be put in lukewarm water, then in the refrigerator, for 8 hours to a day to make another infusion to drink later or the next day.  I would try to never leave teas even refrigerated for 2 days instead but you can.  There's not really a limit to how many times a tea can be brewed;  until the flavor is gone or is no longer pleasant.  I think only the sheng pu'er isn't well suited for cold brewing, but that's just a matter of preference.


Brewing temperature:  those teas we did try were selected to brew well at boiling point temperatures.  This subject gets complicated, because there is only universal agreement that green teas should be brewed at cooler than boiling point temperatures, and which ones at which temperature is contested for those too.  I just wrote a post summarizing a group discussion over whether oolong should be brewed at boiling point or not.  The short version:  brewing tables say no, to use 85-90 C water, but half of the discussion participants said yes, to use boiling point water.  It's probably as well to not go into why there is a difference of opinion; it's in that post.  It could work to experiment, and see which parameters you like, which might vary over time, or could even vary related to using different versions of the same teas.


Online tea group culture:  we definitely didn't into get to this subject.  I only mention it here as a warning that it's not that uncommon to have bad experiences in researching and discussing tea online.  An online friend just mentioned one version of that:  she started a new-to-tea theme blog a few years ago, and people in one of the main tea forums said that her opinion and experience sharing meant nothing because she was new to the subject.  I very much disagree.  After experiencing a learning curve background knowledge increases, and preferences tend to change, but the experiences of people new to tea are just as valid as those with depth of knowledge and experience.

I helped co-found a Facebook tea group (this one, with an international theme) and we don't even need to show people the door for expressing that type of disdain for others because the group culture just isn't like that.  It works to remember that in general those people are only trying to share their own hard-won knowledge, to try and read comments as suggestions, but at some point leaving toxic discussion environments is the only real alternative.


The event was a great experience!  I've done a bit with sharing tea experiences and ideas in real life in the past but I'll have to stay open to different forms of it in the future.
Posted by John B at 2:24 AM