I've relatively recently written a couple of articles on pu'er storage for Moychay, a Russian tea vendor, as part of helping them develop English language based content.  In general tea writing is just a hobby for me, not tied to any compensation, but this has been a limited exception, with the proceeds quickly converted into some extra sheng cakes.

Pu'er storage isn't the same kind of concern for me as for most others based on where I live, since the main concern in temperate climates is maintaining a window of relatively higher humidity in colder times of the year when it's drier indoors.  Bangkok stays quite warm and humid.  It's essentially similar to Malaysia's climate, which is regarded as very suitable for sheng aging.  Malaysian storage, and especially a consistently high level of humidity, can lead to teas picking up a slightly earthier flavor, in addition to transitioning relatively quickly, but with Bangkok experiencing some slightly drier seasons that particular characteristic flavor change may differ.

To keep this post short I'll only summarize the four prior posts I've written about pu'er storage.  The first two in my own blog were entirely research based, as part of initial investigation of the topic.  The third is a summary, posted to the Moychay site, an overview of what is conventionally expressed about storage conditions in online references and discussion.  The fourth cites blog sources covering that research input as citations.  It mentions two unique references, one on creating a home-made version of humidity control salt-packs, and a second about a series of controlled storage temperature experiments, isolating the same teas in two conditions over time to review outcome differences.

I've been drinking a considerable amount of both sheng and shu pu'er over the past two years, following four more or so of dabbling, but really that's a work-in-progress related to personal experience informing this subject.  That recent wave of purchases has included young sheng (not yet significantly aged), middle-aged versions (which would invoke some degree of varying results related to conditions and starting points), and more fully aged sheng versions, but not enough of those to separate out aging conditions and location as an input compared against other variables.

Onto summarizing those articles' scopes:

Pu'er storage and fermentation (posted September 2016):  a general topic review based on research, along with more focused consideration of an air contact / airflow related theme, the idea of sealing individual tea cakes in something like ziplock bags versus more conventionally not doing that.  This touched a little on optimum humidity range and managed conditions versus natural climate in better known storage areas (Hong Kong, Malaysia, etc.), but the next blog post goes further, with the last going more into opinions on setting controls. 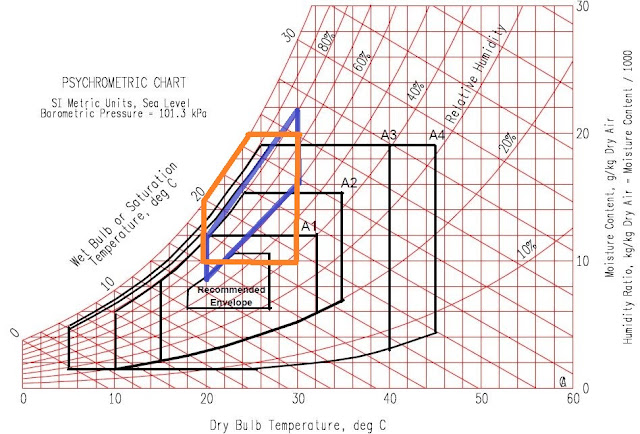 Pu'er storage optimums, and relative versus absolute humidity (November 2017 post):  beyond exploring the same general themes a little more, and going further with citing natural climate condition summaries, this explores what relative humidity means, which helps explain why indoor levels are so low in cold seasons in temperate climates.  That part might be a bit academic for some.  Control conditions and charting related to my day-job background (data center operations and process auditing) help explain how the same concerns could apply to pu'er, and how much water the air can hold at different temperatures, defining relative humidity.  It's not difficult to look up climate stats for places like Hong Kong, Malaysia, and Kunming, and this covers that.


Pu'er storage environment basics (part 1 of 2 articles written for the Moychay vendor site):  the basics, informed by extensive background review for the second article, also grounded by the previous 2 + years of review and public discussion.  It's a complex subject, with some debate over finer points, but the basics aren't that complicated.  This article covers review of optimum humidity in controlled environments (the main concern), air contact / airflow issues, temperature, isolation from external scents (including separating sheng and shu), likely effect of too-dry storage over the short term, avoiding mold, and typical steps to control humidity.  Rather than accept my own summary of a good indoor storage solution control range it's better to hear what works from a number of people who have done their own long term experimentation, which the next article goes into.


Pu'er Storage Environment Part 2: References, Environment Maintenance:  use of supporting references enables taking the concerns a little further.  I've not ran across research content on pu'er storage in the form of academic material, because it's just not that kind of subject, more an isolated practical concern among a very narrow interest group.  To compensate for that subject specialist blog input was used here.  Sources vary in relation to how much personal experience each author and source drew on, with two cases based on experimental results instead (in duplicating commercial salt-pack control devices, and experimenting on temperature as an input to storage effect).

The subject of optimum level of controlled humidity was reviewed from most if not all sources.  One recurring theme is that it's not possible to look at weather-climate graphs and try to duplicate that in indoor storage environments, for different reasons.  This Yunnan Sourcing vendor take by Scott Wilson covers a range of background issues well about that, a reference I don't think I cite in any of the articles.  One point he made stuck with me, one that doesn't tend to come up in discussion much:  rather than trying to seal and closely control humidity in a very small storage space it might work for some to keep their living-space humidity comfortable for people, which could also work out for sheng fermentation purposes as well.  There would be limits to that approach working out, depending on local factors and specific goals and preferences, but taking on related points of view from informed sources definitely helps.


It's problematic to summarize those citations and opinions as reaching one uniform consensus related to one limited point, since they really don't.  But as a general rule opinions on humidity control typically cited around 60% RH as a reasonable control level to support faster sheng fermentation over time, with 70% RH and above more prone to risk of mold of off flavors developing, and 50% RH and under reducing speed of fermentation.  The additional points on how air contact and temperature also affect fermentation and mold risk are critical.

The salt-pack humidity control replacement solution is particularly novel.  Combining specific proportions of sugar and salt (ordinary versions) results in a mixture that will both absorb and release humidity at a designed control level, the same function typically achieved through use of commercial products.  The controlled temperature and humidity experiments cited from the Late Steeps blog really represent some amazing work.

It all can't really answer specific questions like "are my natural home environment conditions suitable for sheng storage and aging" but the last two articles could serve as some well-grounded input.  One might naturally be concerned about the value and reliability of the referenced sources, a point addressed in the summary article, which describes those author's prior writing history and my take on their degree of experience.

As in my own case when other bloggers are basing opinions and ideas on very limited personal experience, and also on forwarding the ideas of others, it's helpful to get a feel for the form and extent of that actual experience.  Being widely regarded as a long-term subject specialist, as one writer cited is, makes for a more promising start, but even then multi-sourcing can help compensate for potentially outlying opinions stemming from unique preferences or personal understanding.  A risk comes with that too; hearing ideas that are actually wrong from multiple sources can make them seem very likely to be true, and potentially bad input along with the good can make the rounds in narrow-field pu'er discussions.

I'm still putting it all together myself, and these writings represent an in-progress attempt at topic reference summary.  This approach tries to explicitly identify and draw on other sources, which are grounded in different ways.  Such an approach could be much more mature and developed if based on even more extensive subject-expert referencing, which is possible, but people in such positions typically utilize that knowledge as a commercial resource, and share it sparingly.  In another decade current consensus views (typical takes) will probably evolve further, even without reviewers taking such summary steps.
Posted by John B at 2:07 AM