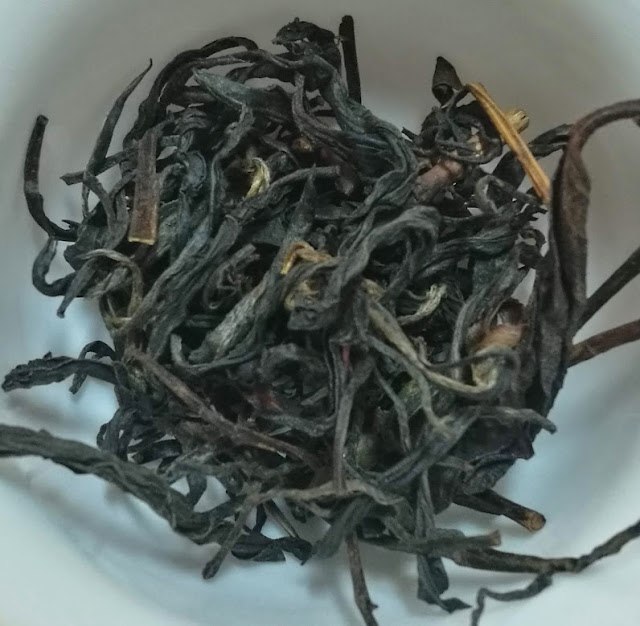 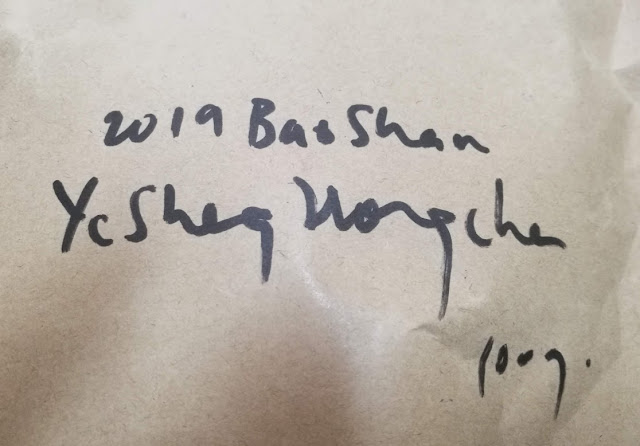 A bit atypical, I'll start with the vendor's take on a tea I bought with a recent order:  Chawang Shop description:


Baoshan is one of largest wild tree (ye sheng cha) area in Yunnan. Growing wild and naturally in the forest.

This material come from April harvest, processed as red tea in small batches.

The taste is rich, full, sweet, no astringency. Complex and rich aroma.


There really should be more rambling on about what the category or location relates to, or my feelings about this.

Maybe as well to skip that once in awhile, especially since I get around to plenty of that in the review sections. 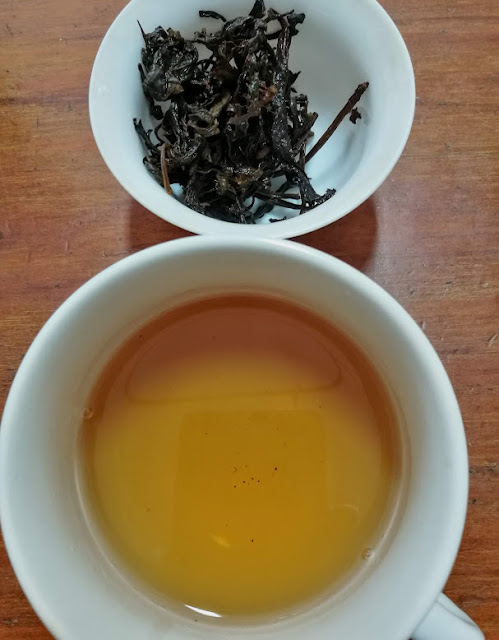 This tea has an amazing dry leaf smell, very warm, sweet, and fruity, heavy on peach.  It could pass for a Mi Lan Xiang Dan Cong, although the tone is probably a bit warm for that.


First infusion:  a bit light; that can happen, not attempting to compensate for the tea needing to open up with use of a longer infusion time.  It's possible to rinse black teas to speed that up but I don't; that relates to throwing away part of the first infusion, seen one way.  This is rich and fruity, but I'll leave off writing out a list until the second round.  And I'll let this brew for 15 to 20 seconds, even though the proportion is higher than I'd usually go that long for, to let it really open up. 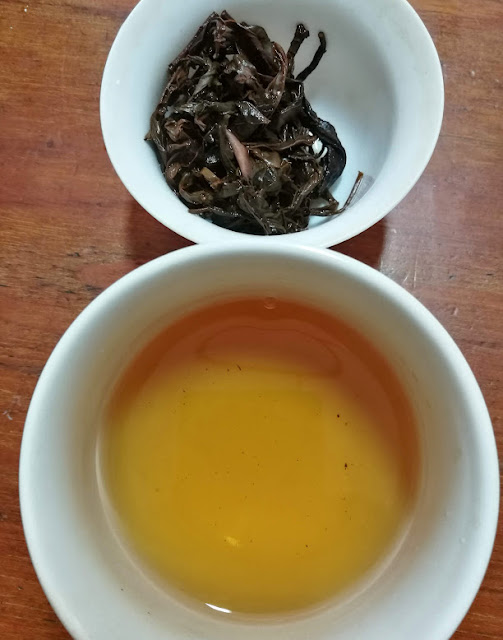 Second infusion:  this isn't what I expected, much more savory in range than seemed likely.  It's quite pleasant, just unusual in that regard.  It includes sweetness, and some fruit in that peach range, but also a lot of warm mineral depth, which extends towards a mineral effect close enough to table salt.  The fruit comes across as dried fruit.  I guess potentially as dried peach, matching the dry leaf scent, but warmer, more like dried tamarind (or both; it's complex).

A part of the profile seems to be missing, and I'm wondering if my own sense of taste isn't related to that.  I first got a cold 8 days ago, and was pretty much over it 4 or 5 days back, but this cold weather seems to be affecting me.  It's only around 25 C out now (77 F), which really isn't that cold, but getting down to a nightly low of 18 C (64 F) makes for an unusual experience.  We've finally stopped using air conditioning at night, because that's below where we typically set it, so I'm getting some feel for that as an inside temperature.  Anyway, my sinuses could be clearer.

This isn't a tea sample; I bought 100 grams of this along with re-ordering some favorites from that earlier order from Chawang Shop.  Those were all relatively inexpensive sheng versions that had a lot of promise related to aging potential, so not teas I'll get to anytime soon, with other cake or tuocha versions (in one case) already started from an earlier order that I'll try from time to time.  Given how Dian Hong usually goes this probably didn't cost a lot, but it was a good buy regardless of whether it did or not.  It's complex, interesting, and pleasant; no need to see how infusions continue to judge that. 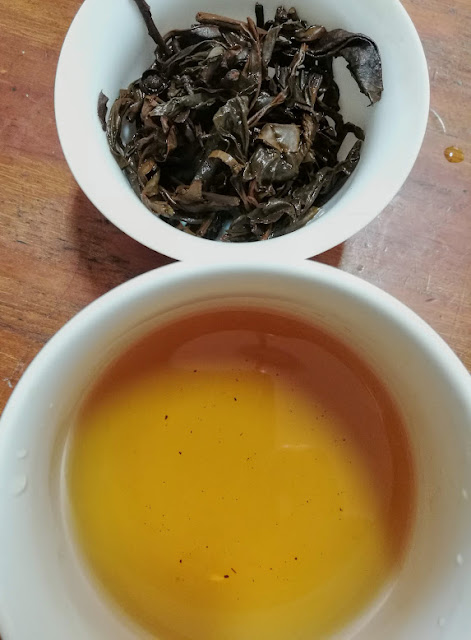 Third infusion:   I went with a faster infusion, just going by instinct, brewing this for just short of 15 seconds.  The fruit has evolved to include a nice hint of citrus, in the form of orange zest.  The interesting thing about this tea is how complex and balanced it is while being unconventional and missing part of what I'd expect.  There's no cocoa in this, no roasted yam, no cinnamon, no mild malt.  It isn't that far off roasted sweet potato; I could relate to someone interpreting this as that, listing it as a primary flavor.  Maybe it's closer to those Japanese sweet potatoes, even lighter in flavor than the version I was familiar with back in the US.

There is a bit of spice that's not so far off cinnamon; it's interesting how per a differing read this could just be roasted sweet potato with cinnamon, while I'm saying it's something else altogether.  Dried tamarind stands out as closest to a main flavor aspect to me, along with warm mineral trailing slightly into salt range, and then some roasted root vegetable probably is next (sweet potato, or something else).

Thickness is pleasant; feel is a nice supporting aspect.  It's smooth though, there is no astringency to it whatsoever, no dryness or roughness.  The flavors come across as clean, and intense, with enough intensity it carries over to an aftertaste effect as well.  I've not done justice to describing what is missing, and putting it that way doesn't completely work.  It's not so far off Dan Cong in character; this is light as black teas go, rich and complex, but just not in that "darker" warmer range, into mild malt and cocoa, etc.  To me that's not negative or positive, beyond being really interesting, which is positive.  It will be interesting to read what the vendor makes of this.  Probably next to nothing [that was it, not one taste description, other than "sweet"]; if teas aren't easy to describe vendors tend to just use less concepts, while I go the other way.

I'll let the next round run for 20 seconds and see what it's like a little stronger.  It doesn't need that, and it would work really well to drink every infusion on the light side instead for this tea. 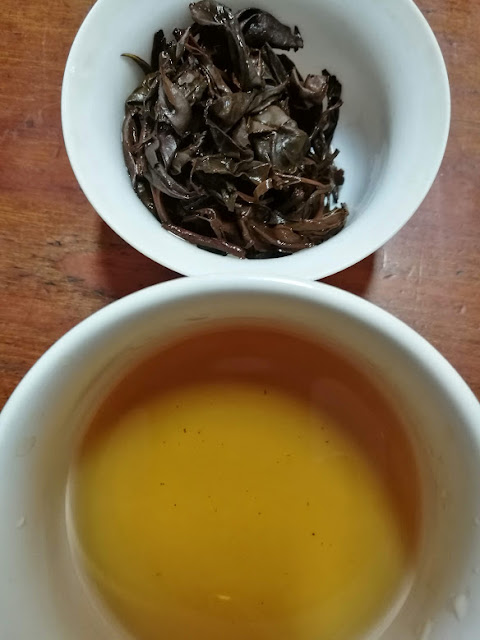 Fourth infusion:  it's pleasant this way; both ways, really.  That warm mineral base really stands out more brewed a little stronger.  A limited range citrus note still really pops.  It's just a fragment of the overall experience but it carries more subjective weight for being novel and interesting, and for complementing the rest well.  It's funny how fruit in the range of peach does make up part of this experience but not to the extent the dry tea smell implied.  Dried tamarind still seems stronger.

To me it would be a waste to let this sit and drink it as an aged tea because those high notes really add a lot to the experience, and they would fade (I think; it's a long transition from passing on informed guesses to likelihoods, and I'm still in the middle).  It's already warm, rich, and complex, with plenty of depth, so there is no need to develop that further.  There is a chance this was a sun-dried tea version and the part I'm describing as missing (or not describing, really) is the way those come out just a little flat in terms of character, which they pick back up within 2 to 3 years of aging.  This might be even better in 2 years, more intense instead of less.  I had meant more that it doesn't need 5 to 7 years to change to be something else (slightly; it won't change much as sheng transition goes).

Per the theory if this is an oven dried black tea this is as intense as this will ever be, and if it's sun-dried it will gain depth and ramp up intensity over that 2 year time span.  It's odd that a Laos black tea I just tried is more in mainstream character and aspect range than this, for Dian Hong style, but then those naturally vary, and being more like more other versions isn't meaningful.  This seems a bit more refined, with more depth, probably slightly better tea.  Personal preference is sort of the main yardstick for that, so it remains a judgement call. 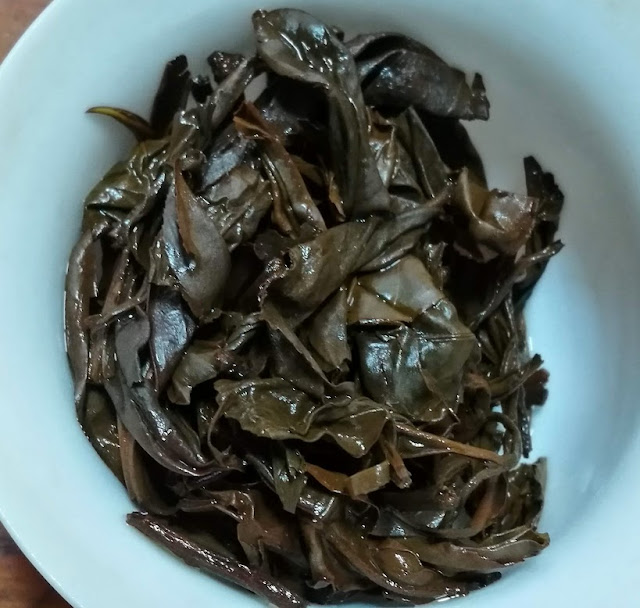 Fifth infusion:  the flavors list isn't conveying how pleasant this comes across.  An initial impression, even five rounds in, is "man, this is good."  It's hard to say why that is.  That flavor could be more intense, the range is really interesting but it could be more complex, thickness is quite pleasant but not overly remarkable.  It all just really works together.

I'm sure it has a couple of additional rounds to go without losing any pleasantness, and I'll stretch it until it won't make any more.  Even in the next round the hint of citrus isn't fading, or losing ground to the rest.  If anything that trace of spice may be picking up.  Feel isn't thick or structured but the moderate feel range it does express is novel and positive, a bit velvety.  Whoever made this knew what they were doing.

More naturally grown teas typically do have interesting, complex flavors and are milder in character, just as this is.  That mineral depth can relate to a plant source being a bit older.


On the whole I love it.  It's basic in one sense and very distinctive and unique in another, and that balance of character and aspects works really well per my preference.

I bet if I went back through and tasted this a couple of more times I'd use different descriptions in the write-up.  I never did pin down that sweetness as much as I might have, and probably would list out toffee or something such as an aspect.  Shifting parameters a little would give different results; the actual aspects experienced could change, along with interpretation.  This version exemplifies why I love black teas in this style.