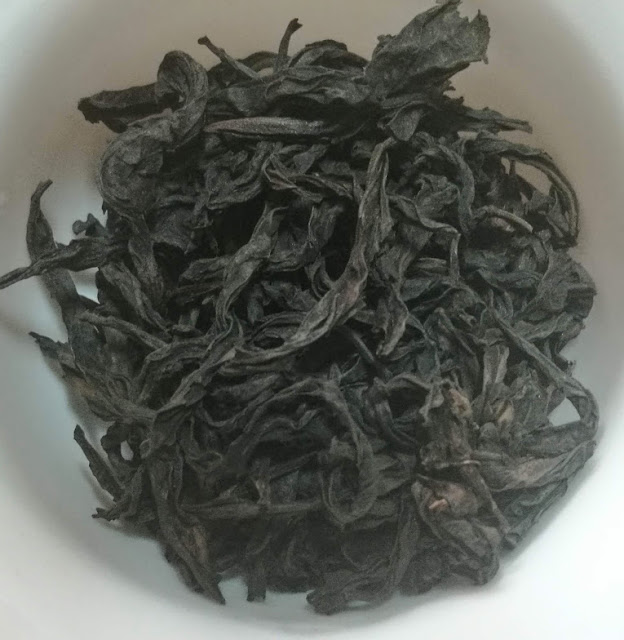 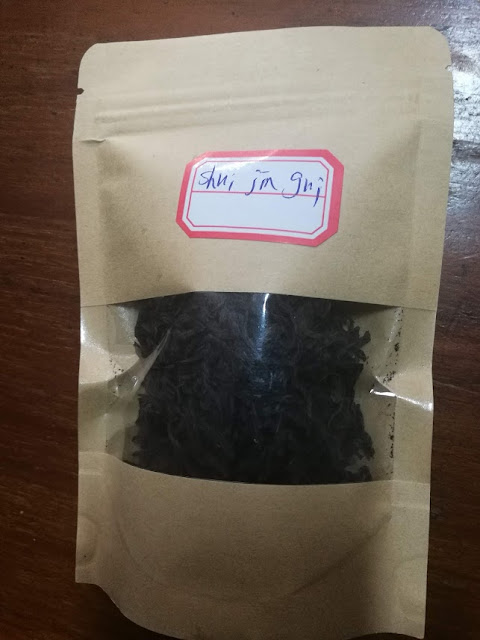 Cindy of Wuyi Origin sent some teas to try awhile back and I'm just getting to the last, a Shui Jin Gui (Golden Water Turtle).  It's not really familiar, so I'm not sure what to expect, but I will cite her description before posting this (here):


Fruity, that reduces to.  I didn't notice all that much fruit in this, more almond, toffee, and butter cookie, with a touch of ginseng range spice transitioning to include cinnamon too later on (with all that in more detail to follow).  The type isn't all that familiar, so I looked up the general background, starting with Wikipedia's take:


Shui Jin Gui is a Wuyi oolong tea from Mount Wuyi, Fujian, China. Its name literally means 'golden water turtle'.[1] The tea produces a bright green color when steeped and is much greener than most other Wuyi oolong teas. It is one of the Si Da Ming Cong, the four famous teas of Wuyi.[2]


Since that doesn't add much about a typical flavor profile ("green" seems to relate to oxidation level, even though brewed oolongs are between yellow, pale gold, gold, and darker or towards copper and gold).  Looking through other vendor descriptions of their versions it's odd how they all say completely different things.  Read a couple and it does sound like this version is supposed to be fruity, but then others oppose that, with some clearly oxidized more to shift the profile.  Here's an example, a Yunnan Sourcing sold version (right, wrong province, sort of):


The taste of Shui Jin Gui is complex, sweet potato, caramel, grass and spice all mixed into one delicious feeling!


That actually isn't too far off my take on this other version I'm reviewing.  Since I was paging around I noticed that Steepster interpretations of what looks to be the same Yunnan Sourcing version included a lot of range:

I glanced back through old posts here and found a review of a version from the main local Chinatown cafe, Double Dogs, from 4 1/2 years ago.  I did cite general descriptions of the tea type in that post but my own take on it probably wasn't all that informative even in relation to what I had experienced.  This blog was a year and a half old then and it took about two more years for review descriptions to become more reliable, and they'll probably be even more so a couple more years after now. 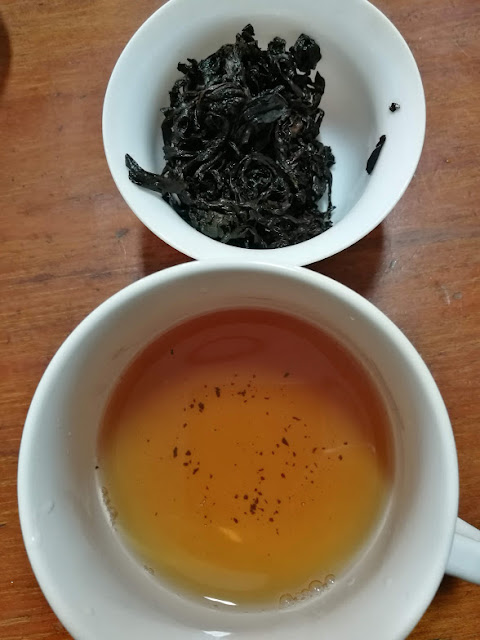 First infusion:  very nice.  This seems closer to almond range than the floral or fruit that tends to come up.  It could be interpreted in different ways but straight roasted almond makes sense to me.  Roast level is really well balanced, normal for their teas.  This level might be slightly higher than for some others but it works well to balance that particular flavor range.  It's quite far from the char effect that comes up in others, nothing like that.  That almond trails over into a medicinal / old furniture range that's quite pleasant, a bit towards root spice like ginseng. 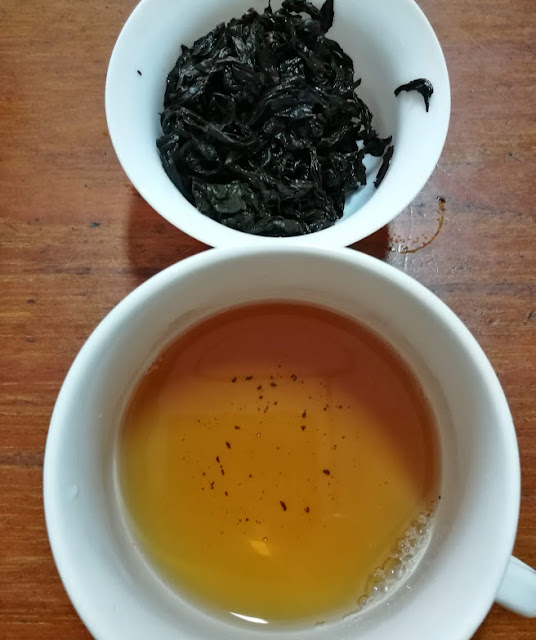 Second infusion:  more of the same, just picking up even more depth.  It's reaching back a bit for a clear recollection but as I remember this reminds me of a Ban Tian Yao from the one local shop I always visit and talk about, Jip Eu (also from 4 years ago; I seemed to be struggling to place the effect of the level of roast in that, not that I name that as a factor).

I'm off to meet someone visiting from Belgium there at that local shop in two hours; I'll have to keep this moving.  Almond is still present but the rest of the range ramps up more.  Ginseng-like root spice might be the strongest flavor aspect, with the almond shifting towards roasted chestnut.

A mineral base input increases, in a form that's not as familiar as some other similar range.  It's like that dry vegetal-mineral range in old driftwood, but with plenty of rock too.  Sweetness is moderate, enough to give this balance, but it's not an especially sweet version in comparison with the fruit and cinnamon in their Rou Gui versions.  It's intense; I'm brewing this fast just to get it in a normal range, just a few seconds.

Their fruitier tea versions are my personal favorite, or floral intensive Dan Congs, but this works.  It's nice experiencing something different, and the good balance and quality level are apparent.


Third infusion:  the roast effect seemed to change the most.  That one rich, sweet, complex roast related range again reminds me of roasted almonds.  Some of that root spice aspect, which is still primary, is giving way to that almond, and it leans a little towards cinnamon.  It's interesting how so much mineral integrates with the rest, landing on a consistent, balanced, complementary broad flavor range.

Thickness of feel is notable, although it could be a little richer or more intense.  Aftertaste effect is nice, the way that roasted almond and trace of other roast effect trails over.  Sweetness may have picked up a bit.  It's in the range of light toffee, which works well with the rest.


Fourth infusion:  if anything this is still improving, and it was very pleasant before.  Richness of feel is developing, still ramping up.  It picked up a butteriness that covers flavor as well as feel.  Interpreted one way that nut and toffee flavor moved into more of an almond butter cookie range.  This probably tastes about as much like an almond butter cookie as any tea ever would.  It's interesting how it's like that without sweetness level being quite as high as fruit or floral range oolongs.  That could be interpreted as a slight savory quality but it just seems like that underlying mineral, richness of roasted almond and butter, with a now lighter root spice combined and well-integrated, with none of that range actually "savory."

This tea has good intensity, but with the feel this clean and flavors this moderate and balanced it should be prepared using hot water and short infusion times.  That kind of goes without saying for oolongs of this type and quality level; making the point here relates to talking to a mixed audience.  Those recommendations to brew oolongs at 85 C in brewing tables may be fine for lower quality oolongs brewed Western style, but even for those I'd use a Gongfu approach and higher temperature, moderating infusion strength and character aspects by adjusting timing.


Fifth infusion:  not transitioned so much; a touch of wood vegetal range might be joining the rest.  I'm noticing cinnamon slightly more than I had last round too.  Shifting infusion time by a few seconds or water temperature by a few degrees (C) might change this tea character, more than for most; it lands on a fine balance of a lot going on.


Sixth infusion:  this tea won't be finished but I'll probably leave off notes here; my wife added a couple of chores to help out with before getting ready and going to that shop.  I went slightly longer on this round, out towards 10 seconds, and depending on preference someone might elect to use 15 instead.

Going that little bit longer, not so many seconds, drew out more of the roast effect.  It still comes across more how roasted almonds do than as a "char" effect that can be present in roasted oolongs.  This tea definitely doesn't need any aging but it would be interesting to see how it changes with a year of rest.  Probably not for the better, per my preference, but it might be just as good but slightly different.  I say that because char effect diminishes over a year or so of time (again not that this is over-roasted).

Even for being six infusions in the thickness and richness of feel is more notable than for the first 2 or 3 infusions.  All the prior flavor descriptions still apply, it's just not worth the trouble describing how that balance of those keeps shifting slightly round to round.  The flavor profile is balanced and complex; none of it really stands out a lot more than the rest, it comes across as a uniform, well-integrated range.  It even seems simple, as a general impression goes, but there's a lot going on once you try to notice what is involved. 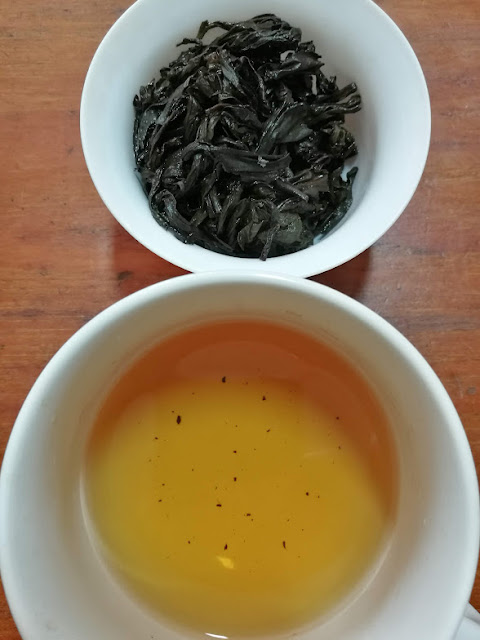 Seventh infusion:  why not see this through that little bit more.  What I said in the last round still applies though; roast comes across as incrementally more intense, but it's still well-balanced with the rest.  That effect seems to draw the nutty flavor from roasted almond a little towards roasted chestnut.  For this style of oolong this is as good as this could seem to be; I end up saying that a lot related to their teas.  It's very complex, in a sense, and refined, but it still ends up coming across as quite simple.  It's good tea. 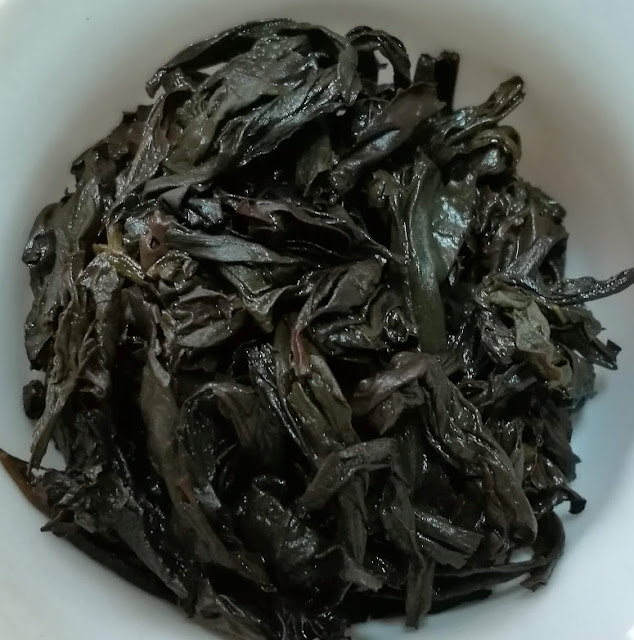 This seems to have been made using a slightly lighter oxidation level, with a bit higher roast, not unlike how one style of Tie Guan Yin comes across.  I've never had any Tie Guan Yin that expressed this complexity or refinement though.

To be clear it's not heavily roasted compared to what turns up here in Chinatown; those are completely scorched in comparison.  It's on the higher end Wuyi Origin teas tend to go, which means it stops way short of tasting like char.  Per my understanding they will roast some oolong versions just a little longer, if that processing suits the tea character, but in such cases those teas are "designed" to be sold after a year or two of rest, which causes the main flavor from that input to settle.

Versions made this way retain a lot of the greener vegetal nature (as oolongs of these sorts go), warming, deeping, and adding complexity through a roast process.  It's completely different than when oxidation or a balanced mix of oxidation and roast achieves a related result; that adds sweetness and a good bit more warmth, pulling flavor towards cinnamon, cocoa or something such, more commonly as toffee or leather / rich wood tone in oolongs from this area, while these slightly-more-roasted and less-oxidized oolong stay more vegetal but pick up an effect like roasted chestnut instead.

It's possible for similar Tie Guan Yin versions to be closer to this balanced but more common for those to be a bit too green and then a bit too roasted.   Kittichai, the owner of that shop I keep mentioning, Jip Eu, passed on a TGY version that he said either won or placed well in an Anxi (Fujian) competition this year that works as an example.  That tea was nice but there's a level of refinement to these Wuyi Origin teas that's hard to find.  They know what they're doing, and they seem to start with really good leaf material to work with.