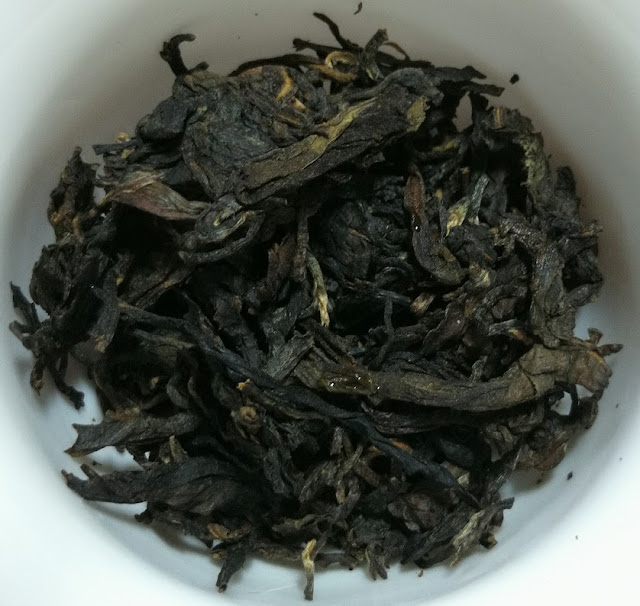 I tried a 2007 Bailong Jinggu sheng pu'er not so long ago, an inexpensive version from Chawang Shop, reviewed here.  Part of that review theme was to taste the tea right away, just after getting it, without letting it rest, then to get back to it a month later.  This is that part 2.

I had liked the tea but it seemed a bit subtle, with a generally low intensity that would definitely be seen as a flaw in the character.  But then not letting the tea rest after shipping is said to cause that, which I have noticed before, but never reviewed in the form of doing a split review (like this).  On to it; I never will quote that earlier post, so if someone is interested they can read it too, or there is a summary take on it in the conclusions part. 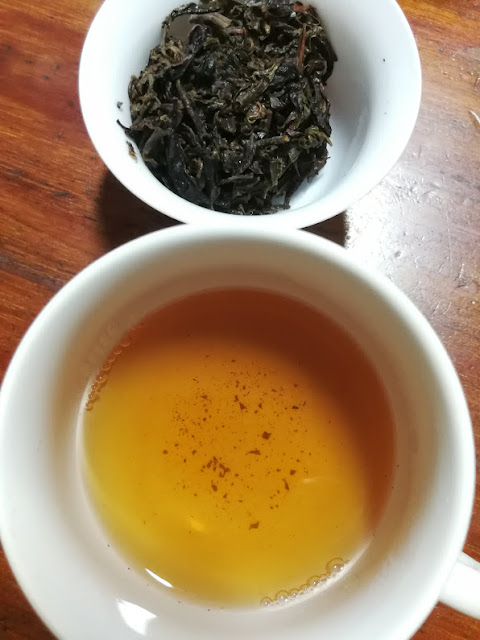 First infusion:  a little rough; some dry mushroom and wood / cardboard mustiness.  On the positive side that dry character seems like it will probably fade and transition over the next two rounds.  The appearance of the tea could be a little clearer too, although it's not so cloudy, just not completely clear.  As for flavors beyond that some light molasses sweetness shows promise, and cleaner woody tones seem more positive.

To be clear I've tried this tea between the initial review a month ago and now so I know where this is going to go.  I didn't refer back to the old review notes first, but I have tried this in the last week so it's familiar.  It did improve; I'll mostly leave it at that.  As I remember it seemed like it might have room to transition positively with more age, or at least there was indication that might occur, which I'll add more about along with tasting details. 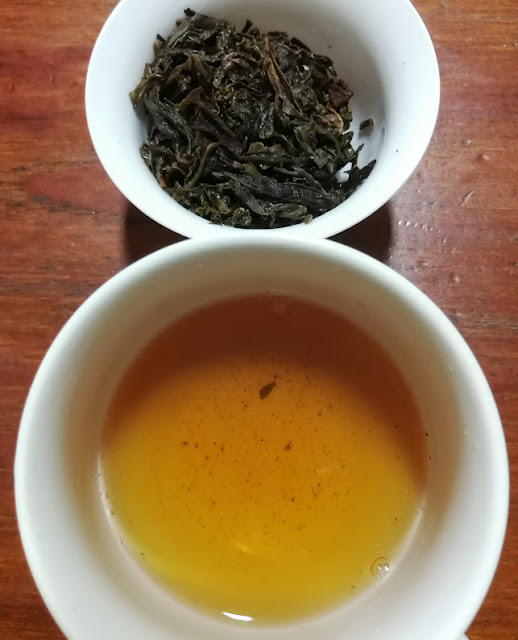 Second infusion:  much cleaner.  This will be in a more typical part of its cycle next round but it's much more positive that fast, which is a good sign.  I wouldn't interpret this as tasting anything like mushroom, although a woodiness close to aged wood or furniture picked up.  The main range is aromatic wood, cedar or the like.  That's close enough to cigar tobacco; an interpretation as that would also seem natural.

It's relatively clean in taste, although it will probably be even cleaner during the next round.  The main story of this tea will seemingly be how it will keep shifting over the next few years, finishing out age transitioning.  That and how someone relates to that aromatic wood or tobacco range related to personal preference; some people would probably really like that, and others would hate it.

It's my impression that it wouldn't be well-regarded by some experienced sheng enthusiast general convention, but I don't try to prefer what others like.  Such conventions seem to evolve based on both shared-experience preference development (influence within a group), and a natural pattern of preference evolution that occurs, so I'm mostly rejecting the former as important to me, but I must tend to experience the second, to some degree. 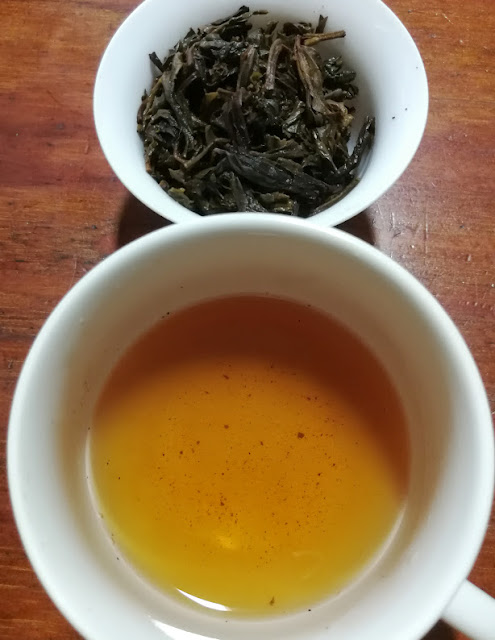 Third infusion:  that's even better.  It's completely clean now, with a much improved feel, only a little dry, but more along the lines of showing a pitch-like resin feel.  Tobacco and aromatic wood evolved a small step further towards molasses, matching the warm, rich sweetness and the warm underlying mineral tone.  The resinous feel matches up with a pine-bark woodiness in this round, missing that herbal sharp note in the pine needles but not completely unrelated.

As I remember a distinct lack of intensity was problematic in the first tasting, and that's not the case for this.  I'm using a high proportion (the usual, maybe 8 grams in a 100 ml gaiwan) and quite short infusion times, a bit under 10 seconds.  It's plenty intense at that infusion strength, and would work well using flash infusions at this proportion, or for using only 6 grams for the same timing.

Fourth infusion:  flavor range shifts a bit towards roasted chestnut, moving off aromatic wood a little.  The feel is nice, with a little room for improvement.  It's not thin but not as substantial as for many sheng versions at this age, with the resinous dryness giving way to a smoother feel, but one with only moderate structure.  Aftertaste is similar; it doesn't linger in a very positive fashion, or for an extended length of time, but the experience doesn't drop away either.

The most positive part of the effect (aside from the limitations) is the way the experience balances together.  The flavor is in a relatively positive range, with no negative aspects.  Intensity is good (reasonable, in a positive range), and feel works for me, even if it could have more richness and depth.  Warm mineral tone is a little towards struck-match character, but bridged between molasses and that; it works.

I get the sense that some of this aged wood, not so far off a greener version of aromatic wood, is close enough to or partly through transitioning to something else.  That fresh edge seems to be what some people value in dryer aged sheng, that it seems to never completely drop out, even though over a long time the sheng will keep transitioning.  I kind of get it; if this tea had spent the last 13 years here in Bangkok it would be relatively completely fermented, but the earthiness would quite likely resemble damp basement character or geosmin (like beets or dirt; with more on that general effect or aspect related to beets here). 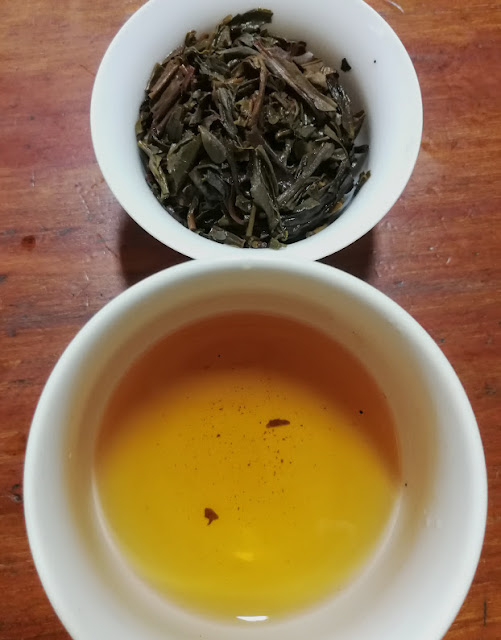 Fifth infusion:  balance keeps improving slightly, but it hasn't transitioned so much.  I like the overall effect.  Warm underlying mineral stands out quite a bit, and decent sweetness, with the rest just shifting in relation to proportion of other flavors (pine bark or resin, tobacco, roasted chestnut, molasses, aromatic wood).  Feel isn't really dry, as it had been in the first three rounds, with that remaining more moderate resinous feel matching a seemingly paired flavor coating your tongue, and showing up as feel aspect in the rear sides of your mouth.


Sixth infusion:  this might be fading already, moving back to a slightly drier woody tone that's closer to where it started.  Or it might just be that feel and flavor effect vary by infusion strength, and dropping timing a little doesn't seem to work as well for me.  I'll check one more round and let this go.  Late rounds do tell a different part of the story, and I don't get the sense this is remotely close to the end.  But it seems like enough for this purpose, identifying how it changed due to resting for a month.


Seventh infusion:  I didn't really let this run longer, still trying it infused for around 10 seconds, to keep that consistent.  Intensity may be dropping off slightly but it's far from finished, and isn't into late-round transitions just yet, it would seem.  The same profile applies, not even really shifted in balance much from 2 or 3 rounds ago.  The character transition I had mentioned in the last round did seem to relate to using a slightly shorter infusion time.

Again the idea was to compare the character to what I thought of it a month ago, reviewed here.

It didn't seem all that different related to flavor and other aspects description, but it did seem a lot more intense in this review session.  I've tried it again in the middle and that was my take then too; it didn't seem as muted as initially.  Feel intensity seemed to pick up a decent amount; per that description and my recollection it was a bit thinner then.  Of course interpretation is hard to pin down; what I've been drinking recently might set a standard benchmark, so whether it's in the better or worse range of what I own might matter.

Beyond flavor intensity ramping up just a little this might have picked up a trace more depth, a little more warm tones and underlying mineral.  This review mentions richness that borders on roasted chestnut, and that earlier version only talked about light cured wood tones, pine resin, and tobacco range.  In late rounds that shifted to root spice range in the first review, but I've dropped taking notes prior to that point here.

Within another year or two those warmer, more complex tones will probably pick up, as the green wood and lighter tobacco notes transition.  Or it could just go to straight tasting like a cigar; it's not as if the transition patterns are that familiar to me yet.  Often even faded flavor in more-aged sheng can pick up a cool root-spice effect, a depth that's not necessarily intense (in terms of flavor) but that seems pleasant anyway.  It's not completely unlike roasted bamboo flavor, mild but with pleasant depth.


It seems like people might use "menthol" in different ways in descriptions (and some even describe themselves doing so), as a way to place what isn't necessarily familiar, or to capture an unusual range that is as much feel as flavor, or in a strange place that relates to both mapped together.  I tend to not interpret aged sheng as tasting like menthol.  It's completely possible that I'm not drinking good enough aged sheng, or that I've not experienced some of the most positive range of potential age transitions.

That's going to keep being a limitation as I progress through more experience.  I won't be buying the standard, well-received, favorably stored $150 aged cakes that draw attention for combining good value and positive character.  My tea budget just isn't there to support that.  For that limitation this almost seems like a good place to leave off most exploration of aged sheng range.  The subject will come up again but all of the most obvious next steps I won't take, escalating quality level and expense of versions.

I really don't mind; it has been interesting to get as far as I have.  I have a bit of tea around, just not much as pu'er enthusiasts go, so I'll keep seeing how it changes over time.  That probably won't relate to doing many "progress check" posts, unless something triggers that.

There's more sheng on the way now, if it ever actually makes it here (transit time is drawing out), and there are always samples as an option, so I'll keep doing reviews.  The general point was more that a typical next-level direction seems to keep coming up, but I don't plan to escalate spending to pursue it.  Cakes like this are nice for enjoying variety and basic range, also covered by a few 2006-range CNNP versions I have, and a good bit of Xiaguan and Dayi cakes and tuos, and an occasional Yunnan Sourcing in-house production cake.

On a completely different subject I returned to working in my office (versus from home) at the end of last week.  The pandemic experience was interesting, but we're down to wearing masks a lot, and reducing group activities, with local restaurants facing an odd mix of restrictions that make it hard on them.  Bangkok malls aren't re-opened but that seems next up.  It's been different, and we've been really lucky that impact here has been minimal.  I'll share a few photos that cover what that was like for me. 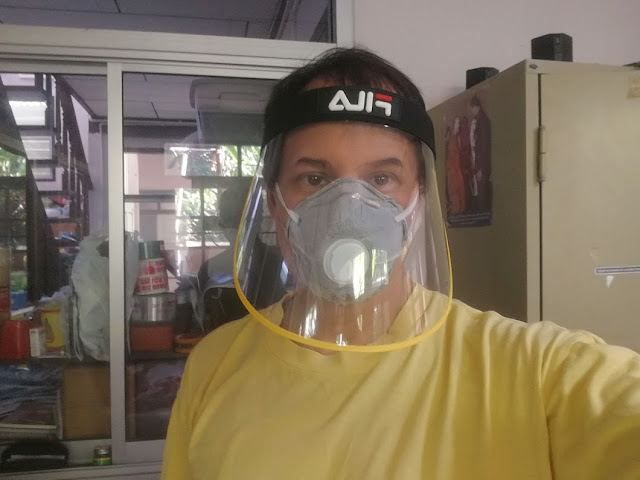