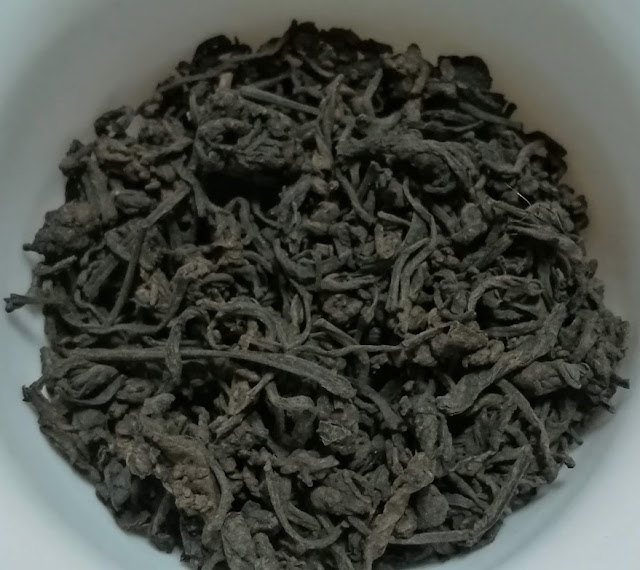 First published in two parts in TChing, here and here.

Oddly the tea that reminded me to write about this may or may not have actually been post-fermented as a small sized lot.  I just reviewed the first Russian-origin shu "pu'er-like tea" version that I've tried, which was pretty good.  Since it was a test batch it probably was fermented as smaller amount, but I'm not sure of that production quantity.  It wasn't exactly the same character as the most standard Yunnan shu, but since those vary it could still overlap.  It was lighter, with an odd mineral / stone taste that probably would fade over another year of rest-time, probably from processing transition (wòduī processing effect).  But it was sweet and complex, reasonably well-balanced, with a good bit of dark rye bread and cocoa flavor.

That's a good lead-in for talking about non-standard shu types, since that essentially had to be a variety Sinensis based shu, with a completely different terroir background than Yunnan.  But I want to cover more on specific processing approach differences instead.

A Thai producer, Tea Side, first brought this subject to my attention awhile back:

As they say, Chinese technology doesn’t assume producing ripe pu-erh out of less than 3 tons of material. Allegedly, a smaller amount of material will not heat up to the desired temperature and, in general, the fermentation process will go wrong...

That time, I thought the vertical pressure of the big mass is important. But then on photos, I saw the tea spread out over a large area in an only one-meter thick layer. To make a one-meter high heap, 3 tons are not required. Moreover, as you know, Liu Bao cha has been done for hundreds of years and its taste is very close to ripe pu-erh. To make it Chinese use just 20-30 kilos of raw materials, but fermentation takes at least one and a half years.

That is how the idea to make ripe pu-erh tea in a basket was born...

I've heard of two other independent sources making basket-approach shu, Moychay (that first reference), and one discussed by So Han Fan, of the Tea House Ghost Youtube channel and Guan Yin Austin-based shop fame (which was replaced with a West China Teahouse business).  At a guess this practice didn't evolve within the last decade.  I'm not disputing that the Tea Side vendor didn't sort out processing independently, only clarifying that the idea was not a unique discovery, since at least one of those other sources pre-dated it.  His results are good (reviewed here), and that article is worth a read.

In looking for a reference to So Han's process and outcome I just noticed that the Steep Stories blog reviewed a few versions only a few months ago; interesting.  So Han posts in TChing, with an overview of sheng and shu background here, but I wanted to cite that basket fermentation theme instead.

I'll keep this general, as a summary of hearsay input, because long and detailed citations don't work in short posts.  Per my recollection they were selling very small batch processed shu, created in such a way that it wasn't even turned (mixed), allowed to ferment with varying degrees of air contact across small piles.  This allowed different parts of the mix to have different characters.  The marketing spin took an unusual turn in that case, with different parts of the piles named separately (the part I didn't find a reference to).

The Moychay owner, Sergey Shevelev, has described an experimentation process essentially identical to that covered in that Tea Side blog, about making batches of shu in baskets.  The "secret" is trial and error; keep making different batches until it works, then adjust for further improvement.  It would be almost impossible to do that without exploring the original larger scale processing first, to work without those details as a starting point (as referenced in this video).  Just trying a broad range of unique versions could be helpful, as are sold on that Moychay site.  It wouldn't help that shu often tends to need a year or so of rest to really be at its best, with some versions clearing up a bit in character over the next year or two.

Since so many variables can be open to exploration (using different tea plant type inputs, adjusting fermentation level, and time, temperature based on controlling the process, amount of water used, etc.) a very broad range of potential outcomes would be emerge.  Matching the standard-types and producers results would be hard enough, and surpassing it very problematic, but to some extent "different" results could be seen as better, across a broad range.

Cha Tou, or clumps of tea that form during shu processing, which are also referred to as "tea heads," are a different but related theme.  Here's an interesting description of that, part of a Chawang Shop product description:

Classify sun-dried leaves by grades, put into pile by wet treatment to made it complete the late fermenting course quickly, the leaves producing a great deal of dissoluble sugar and pectin during the fermentation process, therefore, some tender leaves stick together and form small nuggets at the bottom of the fermentation pile. These nuggets are called "Cha Tou."

The idea here is that even within conventional, large-batch processing there can be some variation in results and effect (with Sergey showing that outcome in the Moychay video I also mentioned).

All this never does justice to how unique and varied small-batch produced shu (ripe) pu'er can be.  But then that's a main point here, that you can't really capture that well in a limited set of examples.  If you try a number of good versions you can get a feel for the effect and variation range, but there would be no way to fully explore the full potential.  Different material could keep being explored from different places, with different specific steps working best with that starting point.  In one discussion the subject of shu / ripe processed Tie Guan Yin material came up, something that I haven't tried.  Maybe that's just amazing, or maybe it's a bad idea; no small set of results samples would be clear indicator (of the second case; any given sample could definitely pin down one particular positive outcome).

One twist is that lower fermentation level may support potential for positive long-term aging results.  Sampling what was made over the last few years couldn't tell that story.  This Teas We Like product description hints at how that could work:

...In fact, the original wodui process for the 7581, which continued until 1999 and includes the cake sold here, only involves about half the level of fermentation of typical modern ripe puerh. The fermented tea would be moderately heated for drying, pressed into bricks... and then sent for traditional wet storage for a number of years. After this, the tea would be rested in dry storage, often for several years, and finally sold.

As usual storage is another main input, further complicating assessing results.  There's no need to overthink it all though; trying novel teas can be quite pleasant, without zeroing in on the best possible long-term results, or sorting out all of what might be out there.