A Longjing tea review, and a philosophy of tea


I just tried a second tea purchased from the Tea Village shop, Longjing or Dragonwell (their reference on it here).  As chance has it I’ve been discussing this type of tea separately as my favorite example of a green tea, so I wanted to write about it before some other interesting teas I just bought, and the queue of others stacking up at home.  As for post layout here I’ll ramble a little first, and then review a tea, and move on to some deep thoughts (sort of).  Somehow it seems a good time for talking about tea in general. 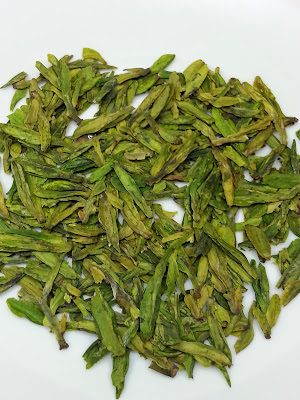 Longjing was one of the first "decent" teas I tried, based on the advice of a Chinese work associate.  Thais don't drink much tea, and I've not met any that are really into them.  He said that Chinese people prefer to drink fresh tea (later it turns out aging can be positive in different contexts, but still right for that tea), and he advised that Longjing spring teas had just been shipped to Bangkok, and even mentioned one place to get them in Chinatown.

Different blog references about Bangkok Chinatown shops tend to caution about tea being stored improperly or for a long time in some shops (the large jars you see in different places), and of course weather conditions here for tea storage are the opposite of optimal:  really hot and humid.  But somehow Longjing typically falls under a separate category and when you ask about that in a Chinatown shop they go and get sealed bags from a refrigerator.

At that time I tried different grades of the Longjing teas they were selling, and could tell some difference in them, but wasn’t so clear on what the difference meant or which I preferred, so I sort of just picked one.  I’ve not really progressed in terms of Longjing character or grade understanding or preferences, but then I’m not really angling to be that type of tea expert, a walking reference on tea types and flavor profiles.  I research what interests me, try lots of teas, talk to people about all that, and whatever sticks I retain.

I will repeat one fragment I recall about Longjing from research, although this really won’t pass as knowledge.  I watched a tea review video once where Jason Walker (a well-known tea reviewer) said the characteristic flavor element in Longjing should be toasted rice rather than nuts (see a different review of a similar tea here; or maybe it is the same one, I didn't actually watch it prior to writing this).

As much as anything this raised the issue of what “should be" related to tea, in this case related to a flavor element, the type of thing tied to grading, along with other details.  But what does this "should" mean?  It could mean people are describing it wrong, one common element generally found in most examples.  It could instead mean that better versions taste one way and others with a different characteristic element, sort of related but not the same.  I took it as some of both.

Location is also an issue, with different types of Longjing produced in different places, similar in preparation styles but essentially slightly different teas (but to be clear grade level and location really are separate).  It all gets a bit complicated, just sorting out this one tea.  You could read more about that here in one general reference, or there is always Wikipedia's take, or lots of vendors have lots to say.  Note that all these references links here are about Longjing, but the range of possible tea subjects is a bit broad, not just about tea types (processing, regions, tea gear, brewing--on and on).

There are different other references if someone wants to go overboard, a tea forum (there is more than one, actually), Steepster (review post site, with some reference and discussion content), and plenty of reference sites (I've been mentioning the Tea Guardian lately, but there are others), and so on.  If the concern is about buying tea, which would surely come up, a bit deeper look might make more sense than idle curiosity would drive.  Subjective preference could well be a completely different set of concerns, of course.  No one can help with that part, except to point in different directions based on input about what you like.

This review is just to say what this tea is like, and a little about what it is, and I suppose to start in on where further investigation might lead.


The tea tastes fresh to me, very lively.  I'm not saying it necessarily was made a lot more recently than most teas I've ever had, but rather that it tastes like that (so maybe).

The typical descriptions one runs across for green teas are grassy or vegetal, and it’s along those lines, but with the distinctive flavor only Longjing seems to have.  Again someone might say the primary taste component is similar to toasted rice, or nuts, and that may well vary a lot by the actual tea (growing location, grade level, preparation style, handling, proper brewing process, brewing water type and vessel used, etc.).  So I’ll just stick to this tea. 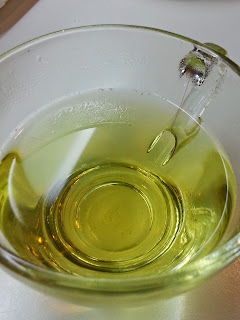 I’m not sure how to describe it.  Great work reviewing tea, right?  To me it tastes like Longjing, as if in some strange way that might be a basic flavor, but of course that doesn’t work as a description.  The tea is sweet, light, and slightly vegetal, but not so much like grass or a vegetable.  The closest actual vegetable flavor might be very fresh sweet peas, nothing like the dark green mess that comes with overcooked peas, or frozen ones, or--the horror--canned peas, but a sweetness and freshness that sort of transcends and tastes like something else.


Pardon the tangent, but the days of people knowing what truly fresh vegetables taste like seems to have passed.  If you grow your own green peas, pick them when completely ripe, and prepare them just then it's far different than what a grocery store or market is going to give you.  Or at least that's how I remember it when I did that.


It almost works better to talk about the character of the tea without breaking it into a list of flavor components, even though that is the standard approach.  It has an unusual feel to it, a soft sort of astringency that gives it an unusual dryness, but in a subtle, pleasant way, nothing like the way stronger teas can really stretch such sensations (no need to name names).  There is depth to the way the lightness and sweetness mixes with that feel, and a light vegetal character, and another component that is hard to fully determine (below that toasted rice and the vegetable elements and sweetness, a very light and soft mineral, something...).

It seems the main distinctiveness relates to the tea essentially being fried, versus Japanese teas being steamed.  In cooking when you fry almost anything the flavor changes significantly, differently for different ingredients, and varied per how you’ve prepared them.  Roasted garlic is wonderful, very different than raw garlic, and not so far off in terms of preparation steps from the much less pleasant bitterness of overly cooked garlic.  If all the conditions are just right the final product is just right, and no one could prepare it based on a description of process steps, it takes more than that.

After discussing the Malliard reaction (what happens to toast) related to a recent post about Hojicha (Japanese roasted green tea) it almost seems one should dig much deeper to see what’s really going on with this Longjing, but I won’t.  The tea gains a wonderful distinctive nature from whatever combination of causes, all the while staying even more fresh for going through the processing.


A philosophy of tea


On the one hand I’ve loved all the different Longjing teas I’ve tried, and on the other the teas referred to as such can vary a lot, described by growing locations, types, and grades.  As with many types they are rumored to routinely be sold as knock-off versions.  The brewing process isn’t quite as forgiving as for lightly oxidized oolongs, which are sort of hard to screw up (optimizing them is still a different thing).  So trying one from a reputable vendor would likely be an indicative experience (probably a very positive one, per my experience), but even trying a few teas doesn’t really let you learn of the type in any detail.


It’s these types of contradictions I love about tea; it’s how you take it, and you sort of never do get to the bottom of it.  One could be fearful of what to buy, from who, the actual value, and brewing variances, and focus on gear, or get lost in research, and online discussions, and be better off drinking coffee in the end.  Or you could just go buy some loose teas and dump them in hot water, and keep improving every step of that process over time, what you buy and how you make it, marveling at the degree of achieved success each time and always building on it.


With this type of perspective in a way it’s almost best to know nothing; beginners mind, the Zen idea.  Once someone has actually tried loose tea (maybe decent loose tea; it’s not all so interesting) the journey is begun, but it could be all the more interesting for being much closer to the beginning than far down the learning curve.


I suppose that's not completely true since someone could keep brewing decent Longjing at boiling point water temperature and more or less ruining it (it would be bitter, which it shouldn't be), but I mean aside from such concerns.


It’s possible that some could instead turn to the dark side of tea, tea snobbery, criticizing others for not knowing what they know, and not being worthy of higher tea experiences, likely prompted by fear of being judged themselves.  But in general tea people are balanced, open, positive, nothing like that (even vendors; and without them the tea stays where it started out, essentially with Asians drinking most of it).


So one should walk the path of tea experience with an open mind and light heart.  One should drink decent tea, then better teas, to learn and find their own way.  It's always pleasant to find that most other people that are into tea have a similar perspective.  It can be daunting that vocabulary and the concepts being described by advanced tea drinkers can be a bit much, even for me after two years of obsessive study, but taken for what that's worth it's just an extension of the same type of exploratory approach it begins with.