Straight to it, a review of a third type of Wuyi Yancha, from the same vendor as the others I reviewed earlier (for Da Hong Pao and Rou Gui teas, in two different earlier posts.  Note that the vendor, Cindy, uses a Facebook contact for Western (English language) tea correspondence, so there are nice pictures there of the recent growing season as well.  The tea I'm reviewing was labelled as 2011, so it's back to the issue of tea aging too. 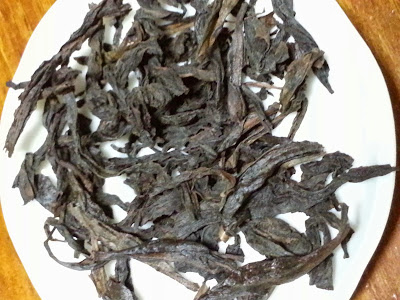 The tea brews to great pronounced natural sweetness,  again in the toffee range, with typical Wuyi Yancha type undertone flavors, mostly dark wood, a bit of cinamon, hint of leather.  Some degree of mineral element might also be typical but in this case earth tones fill in the basic character, perhaps with a trace of mineral "below" that.

The sweetness also relates to a subtle fruit component, closest to apricot.  Altogether these make for a really nice flavor profile.  It's similar to Da Hong Pao but without the slight musty earthiness in some (which isn't always so negative, and varies by tea), similar to the Rou Gui teas I had tried but with less of the distinctive aromatic element (floral, but not exactly floral). 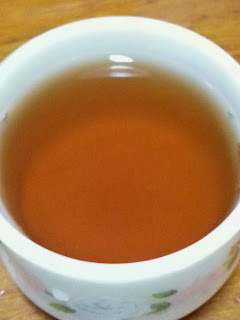 Complexity is good, very rich and clean flavors; I could drink this tea every day.  It has no astringency,  not unusual for the more general type.  The tea doesn't have any flaws or weaknesses, a very nice tea, but someone preferring other types might perceive a lack of those distinctive elements in the teas they prefer, a different body (the softness could be seen as a negative),  more aftertaste.  The rich flavor does linger after tasting, it's just a different experience in different teas, not as pronounced as in the Rou Gui examples.


Second infusion is consistent and just as nice (using western brewing, adjusted to narrow tea to water ratio and limit time, a modified version).  A third infusion brewed longer retained the wonderful flavors, with the cinnamon picking up a little, the flavor profile just thinning out slightly.

Sharing some reading up has become something of a habit, which I'll continue here.

One vendor (Tea Spring) said this about the taste:  strong and full-bodied Oolong with a refreshing floral aftertaste. Aged Shui Xian have a smoother mouthfeel.

This tea I reviewed was four years old, and very smooth, and of course I wonder what the differences would be in a recent version.  The vendor that provided it said the teas are preferred aged, that the teas gain smoothness, and that the flavors associated with roasting process diminish (towards char, but not exactly that), so in general the flavors improve rather than diminish.

So that's it, although there are generally no simple answers when it comes to tea.  Of course the article had more to say about aging other types, specifically pu'er.  Odd I've heard differently related to one point they made:  shou Pu-erh comes to the marketplace ready to drink and needs no further aging. But it can be successfully kept and aged - over time, shou Puerh will also mature and mellow.

I don't recall a specific time-table but it seemed I'd heard there was a period past which negative manufacturing process related flavors would diminish, so similar to the point they just made about roasted oolongs, but I'll skip past that for now since this is supposed to be about Wuyi Yancha research.  White tea aging came up in a recent post and this reference addresses that too; the short version is that it can age, depends on preference, but they say Bai Mu Dan shouldn't stick around for longer than a year.

Related to this tea type in a different article, that same vendor (Tea Trekker) said something similar about the typical flavor profile::  expect simple but satisfying scotch-like peaty flavor and a rich, smooth mouth-filling body from this tea.

Peat was a little closer, although I wouldn't describe the tea I tried as such, more wood and leather, but close enough.  They raised a few other interesting points:  recommending a rinse for their tea and oolongs in general.  In the past I did rinse most teas but am out of the habit now, due as much to losing interest in the trouble of the extra step as beliefs changing about why to do it.  The reference also mentioned large number of infusions possible from oolongs, which in my experience applies a lot better to less oxidized versions, but this tea held up well enough.

The younger Shui Xian displays the usual roasting characteristics: heavier fragrances like black chocolate, coffee, Macadamia nuts. The charcoal smell is strong in the pot of wet leaves, but doesn't impact the tea very much...

The 14 years old Shui Xian had yet another change in fragrance: this one actually reminded me of some Chinese wines like Maotai. It's not as obvious as from the old LiShan Oolong jar... but the same post fermentation processes are at work here. And the taste continued to feel richer and softer than the young Shui Xian.

Lots going on there!  This definitely expands on and adds detail to the idea that roasting related flavors diminish over time, and that the aging process changes the flavors in other ways.

I've tried a few aged oolongs from Taiwan and China but none that completely sold me on the positive impact of aging, but then it's hard to separate the cause as the teas I've tried or my own preferences.  It's even possible I'd appreciate the same exact teas differently now than when I tried them, so I'll come back to the subject at some point.

The different online sources seem to be talking about two different teas related to Shui Xian, a cultivar used to make inexpensive restaurant teas, or a reasonably high-grade tea comparable to the other Wuyi Yanchas, a dichotomy explained well by this TeaDB reference::

Along with Rou Gui and Da Hong Pao, Shui Xian (also Water Lily) is one of the most represented Yancha in the western tea market... sold far more frequently than any of the other famous bushes and possibly even more than Da Hong Pao.  Shui Xian is even commonly consumed unknowingly often being marketed as Da Hong Pao...

...It is traditionally fired a shade darker than most Yancha although this is not necessarily a steadfast rule. Why is it far more consumed than for instance the three other famous bushes (Tie Luo Han, Shui Jin Gui, Bai Ji Guan)? Simply put, Shui Xian is a highly prolific bush.

...Shui Xian’s prolific growth rate makes it a highly viable product for mass-produced commercially-driven tea...  Does this mean Shui Xian makes only mediocre/bad tea? Definitely not. Given the right terroir and processing, Shui Xian can make top-notch Yancha. The best Shui Xian is grown deep within the nature reserve with the four famous bushes.

So the common themes of cultivar character, production differences, growing area, and multiple processing differences all come together in the form of very different grades of teas.  The plant type can be used to produce high-volume ordinary grade tea or quite nice tea.

A lot of these same concerns are familiar from differences in Jin Xuan production in Thailand, the most common plant / cultivar type used to make lighter / less oxidized oolongs here.  It is also a high-productivity plant type, also associated with relatively common-grade tea, and I've also tried it as a number of different quality-level final products.  I didn't like any as well as this Shui Xian example, but some of that could relate to what I've tried, and to a personal preference for more oxidized teas.  Of course I'm only speaking from the limited perspective of one tea drinker, but I've tried Jin Xuan as better teas produced in Taiwan than in Thailand, with a substantial character difference in teas from the two regions.

Tea "counterfeiting" is also a common theme in these regions, but on a broader scale, so that one reads mention of teas from Thailand being sold as teas from Taiwan.  To me, in general teas from Thailand are smooth, sweet, rich, and buttery, with a bright yellow brewed-tea appearance, and the teas I've tried from Taiwan have a more mineral-toned nature, perhaps less sweet, with a different type of full feel to them, not "buttery" but complex in a different way.

But I'm getting way off the subject.


I really liked the tea.  It fared well enough in comparison to my favorite related type, Da Hong Pao, and to some really interesting and distinctive examples of Rou Gui teas.  I did compare it to a Da Hong Pao  I've been drinking a good bit of lately through side-by-side tasting, and the teas really weren't so different.


Of course I've always wondered if some of the Da Hong Pao teas I've tried really weren't something else, but that's a subject I'll keep coming back to.  Judging tea authenticity and origin along with tea grades is only possible with more experience and training.