I wanted to break from just reviewing teas at some point but recently tried a nice white tea, and I'd been saying white teas aren't a favorite in some online discussion, so I wanted to set it all straight.


Of course I did just review a bai mu dan, saying I liked it, and past reviews of silver needle teas have been generally positive, so the comments weren't that negative.  My favorite types are darker oolongs and interesting black teas, and I can definitely appreciate white teas, and Darjeelings, and lots of other styles.  I always try to keep expressing thoughts on teas simple, but it never works out like that, so there are two tangents in this post.

I should note first that the tea is from 2014, first flush, so it's odd to review a tea that's essentially a year old now.  The vendor sent the sample earlier in the year, so part of that was just about not getting to it right away, and the rest about not getting to it.  I'd planned to say more about the other darjeeling samples related to posting about a different version here (black Thurbo Moonlight, second flush).  That intention related in part to saying more about seasonal differences and Darjeeling as a non-traditional type of black tea, neither of which will really work since this is most distinctive related to being a white tea.


I wonder if a bit of extra aging had changed the tea, but would never really know.  Based on my limited understanding of how different teas age green teas typically are intended for consumption as soon as possible, and white teas generally aren't intentionally aged, but more oxidized teas, including oolongs and whites, can actually benefit from changes related to even extended aging. So of course I looked around a bit about that, and ran across a discussion thread on aging white teas on Tea Chat (tea discussion forum).


Of course different people say different things in such a discussion, but aging white tea isn't unheard of.  It would be more familiar related to white teas pressed into cakes, it would seem, but the discussion is more about aging loose white teas.  A tea that's one year old isn't really aged all that much, but of course I'm still curious about the difference a year could make, if any, and changes another few years would bring.  That discussion doesn't settle it at all, and barely gets into descriptions of changes, but it is a few pages of informed input on the subject from people that are into tea enough to go to a site like that to talk about it (of course with differing levels of background--which goes without saying).  Storage conditions would relate too (another thing that goes without saying), kind of sore subject if you live in Bangkok, one of the hotter places on the planet.


What would a tea expert say about this?  Probably different things from different people.  One vendor, from Peony Teas, who writes about tea background, says:  with age, white tea actually changes its properties to sweet and ‘cooling’.  Who doesn't love those Chinese nature-themed properties references?  Maybe easier for many to relate to comments about taste changes though; I'm not sure if I should be getting cooled or warmed, or if it matters.  I guess this is one more idea to keep on the back-burner for later review (or two; aging white teas, and the cooling). 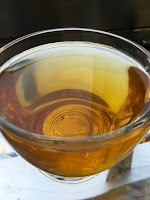 At first I thought the tea was a silver needle, but it contained some leaf fragments, maybe closer to an even mix of buds and very small leaves, not the normal balance towards leaves in a bai mu dan.  It is sold as a "white tea," see reference page here, so they don't commit to either style, and I probably like this mix better than either other traditional type (all buds or mostly leaves). 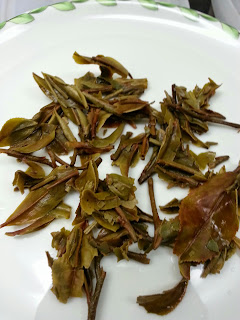 My first impression related to how floral and sweet the tea tasted, but then I also appreciated how fruit was a component (closest to pear, it seemed to me), and how complex the flavors were, and the rich body of the tea, so lots going on.  The second infusion shifted more towards fruit than floral, with a bit more earthiness and less floral nature, with more of the trace of distinctive grape / muscatel more pronounced in second flush teas and more oxidized versions.


To me the complexity came across as a consistent expression of positive traits of both white teas and more subtle darjeelings:  sweetness, floral and fruit components, rich depth, floral transitioning to earthier flavors in later infusions.

As I ran through what I thought and later expressed about the tea it didn't seem I'd really captured the essence of this tea in the description.  Really no set of accurate concepts does get you far towards the experience of actually trying the tea, but it can describe it to some extent.  To me the richness of the tea, along with sweetness and bright flavors, gave it an interesting overall effect.  The feel was so full it was almost a bit buttery, but not really in the sense it tasted like butter, but maybe just a little creamy in a way.


My main reason for not appreciating some white teas in the past, even though I really have liked all I've tried, is the subtlety, the way interesting flavors and a nice body can still be exhibited as flavors that come across a bit wispy.  This tea wasn't like that, no struggle to taste it along with feeling it. 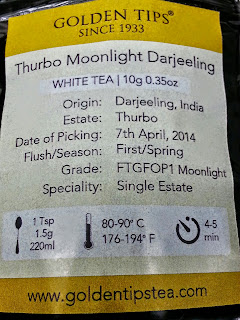 The vendor recommended the typical longer brewing time for white teas, four to five minutes, and based on varying brewing times it seemed to me the flavors were still full using a shorter steep, maybe even better in some ways.


A shorter and lighter infusion enhanced the brightness of the tea without coming across as weak, without limiting the floral or fruit elements, still with an exceptional body, but just didn't bring out the full rich complexity that would seem more typical of an even more oxidized tea.  I guess this could relate to a touch of astringency, but not in the same sense as more typical black teas and other Darjeeling types, definitely not bitterness.  For some brewing lighter style versions of the tea would be more enjoyable; it would depend on which elements someone liked best about the tea.


It raised the question of just how oxidized the tea actually was, since an earlier and lighter infusion seemed to have a different character than a later or heavier infusion (two separate factors, but taken together it could come across almost as two different teas).  Some tea lovers might well read this with disgust and think optimizing tea experience is the obvious and only goal, so messing around with brewing times and drinking a tea as different types of final infusions is madness.  Good for them; I love reading blog posts from people that have tea process and their own preferences so carefully dialed in.  It's also interesting that different people have equally strong preferences and convictions about how they brew different types of teas.


Of course the two main general brewing techniques also relate, and it would seem more natural to brew a tea "stronger" using a Western approach than gong-fu style, whether in a gaiwan or differing types of pots.  At the same time the higher tea to water ratio for the latter would change the brewing time required, and resulting flavor profile, so that a comparison of relative "strength" wouldn't really make sense, or the opposite could be concluded.  For what it's worth the vendor instructions for this tea related to Western style brewing, which I used, except for trying on shorter infusion time.


Really I'm not the right person to specify how all this "should" go, or describe different techniques as they apply to different tea types, and references you find online differ quite a bit, as these describing gong-fu preparation here and here.  Note in particular the brewing times are relatively opposite, with the two approaches one generally runs across described in each, very rapid brewing time and use of 30 second infusion and subsequent longer periods.  Now I'm drifting a little but you might read this about reasons to prefer use of a gaiwan (and related gong-fu style brewing).


I've been impressed with this and the few other white Darjeeling teas I've tried, very novel teas with unusual strengths, and this one stands out.
Posted by John B at 10:24 PM