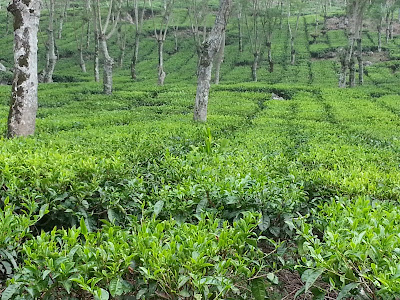 An interesting tea from the Wonosari tea plantation; a nice one to follow-up the initial travel-blog themed post about visiting Indonesia recently.   The appearance is unusual,  a dull light green, presented as folded bundles of tea.  Somehow the color seemed a little flat, if that makes sense. 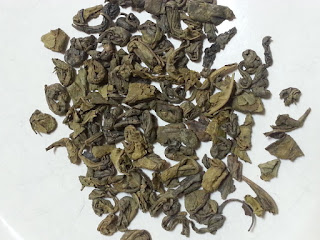 The initial taste was vegetal, towards grassy, but more in the range of spinach and green peppers.  I was reminded of a recent experience with a Thai green tea thinking that someone else more into green teas might really like the tea.


There was a little mustiness to the flavor as well.  That also reminded me of that Thai tea. I had initially thought it related to freshness but per the owner of Monsoon teas it was more an attribute of the plant type,  a local "wild" Assamica strain.  And of course it could also relate to terroir, and processing could come into play.


About freshness, the "use-by" date on the package gave the tea another two years, really too long for a green tea even if it had been made in the past month, but without knowing how long they thought it could last I wouldn't know that origin date (without asking about all that directly--a bit of gap there on my part).  Since they were cutting tea then (we saw someone doing it), and since Northern Hemisphere seasons don't mean much on the equator (8 degrees South of it, if memory serves), it's hard to say what they were doing for harvest seasons.


The next infusion was a lot cleaner in flavor.  I'm out of the habit of doing rinses but it occurred to me that it might work to experiment with that for this tea; essentially throw out the first short infusion to get better results in general.  I have a cold so the aspects were coming through across a compromised palate but I'll give description a go.  I thought to try it a second time, and did the next day, buy my sense of taste seemed completely gone at that point, so I think my cold is getting worse.  If I thought it would change things I'd have held off on posting this but I'm sure a few more details would emerge, but doubt the general impression or review would. 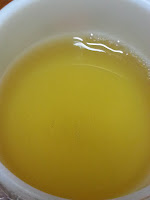 The vegetal aspects toned down a good bit after the first infusion.  More mineral elements started coming to the fore.  I had wondered how volcanic soil would affect this tea (there were volcanoes everywhere;  clearly we were standing on an older one), and it seemed likely that was part of background for that aspect.  It wasn't the same rock effect found in Wuyi Yancha,  a little closer to Vietnamese teas, but not that either, richer and earthier and less dry, not so much like shale or granite.  I'd like to think it was like a black sand beach smell,  but it's been awhile since I've been to one, or to that active volcano in Hawaii where brand-new rock is all around.


Other nice aspects joined in, a fruitiness.  It was hard to separate particular fruit, maybe towards blueberry,  or a light sweet tropical counterpart.  I have tried the herb that Fruit Loops cereal tastes so much like that it almost seems to be based on it, pandan; maybe like that.  And this seems a good place for a tangent.


To begin with, Fruit Loops isn't based on pandan, it's just a coincidence that the mix of artificial and natural flavors end up sort of close to there (and it turns out that the different colored loops all taste the same--crazy; I could swear Toucan Sam said otherwise).  Pandan is an herb described as one used in the same way vanilla is in some references (like Wikipedia; that's digging deep into the research).  Don't take my word for it that pandan tastes like Fruit Loops, though (just better); here is a Michelin-starred restaurant dish review that makes the same comparison:


A delicate, paper-thin slice of steamed sponge cake is soaked in pandan syrup and topped with pandan ice cream, milk gelato, and candied pistachios. The long green leaves of the Southeast Asian pandan plant lend an aromatic, fruity flavor that is startlingly reminiscent of Fruit Loops (of all things), making the addition of the milk gelato even better—like cereal milk.

Back to it then; astringency in that tea was limited.  All in all it was a nice tea, good complexity,  interesting range of developing flavors from one single tea.  It might have been lots better when fresh, or maybe that was relatively fresh.  Although I literally bought the tea from the people that made it (and who did plantation tours) we didn't talk much about the tea, at all.

I'd stayed awake almost the whole night before to climb a local, very active volcano (ok, really the next one over; we went up Mt. Penanjakan to see Mt. Bromo), so it was hard enough to focus in and not leave tea behind.  They also sold a good range of tea bag tea, which I did leave behind.


It's a good start for Indonesian teas but I wasn't under the impression I found the best of what they had to offer.  Subsequent discussion indicates there are probably more and likely enough better plantations in the West and center of Java island, and also on other islands (Sumatra in particular, as I recall, but I'll get back with a bit more research in another post).  I think by messing around a little with that tea I tried you could get a little more out of it, find the complexity it had to offer, and I will do just that, later, without a cold.  I also bought black tea and a white tea from them, and green and white from another shop, and some commercial teas, so I'll get back about more of those along with more to say about Indonesian tea in general.

That was already the natural stopping point for that post; I gave a rough idea what the tea was like, and admitted to not knowing that much about it given that I was right there at the source.  There are some other teas to review, so I'll have ample space for going on about whatever, with more plantation research the one part I've promised, but I don't feel like I've really communicated much of what Indonesia was really like.  Somehow it deserves that, since it was different than I expected, nicer in a lot of ways.

It didn't really feel as much like a developing nation to me as most of the rest of South East Asia.  Some of that might be that the rough edges are just familiar now (I've been here for 8 years), so I'm just more comfortable with seeing shacks next to modern hotels or malls, or however that goes.  But I don't think that was it.

It was less Western too, so malls and convenience stores weren't quite as predominant as in Thailand, but at the same time the rough edges weren't quite as rough.  According to whatever development indexes the UN and such use it probably wasn't past the middle of the curve but they'd went their own way, and it wasn't a country rushing from a traditional agricultural society to Western infrastructure and shopping, with tourism and manufacturing as a base.  Ok, maybe tourism was the foundation in Bali, but not so much in Java.

As an example, we took both an ordinary class and a more premium class train on Java, both of which were nearly free compared to anything I've researched from Amtrak (which I never took; always too much cheaper and faster to fly).  Any train travel except high-speed options might seem a bit second-rate, to some, but I love trains, all types of them.  In Thailand and Vietnam they go the next step and offer sleeper cars, like a tiny budget hotel room but with a WW II era miliatry ship feel to it, but it was still great to have multiple, inexpensive options like those in Indonesia.


I'd guess it had to do with a long history of being a Dutch colony, the kind of thing Thailand is proud to not have in their own background.  Places like Laos, Cambodia, and Vietnam don't really play up that background, at least in most places, although it's there in old architecture in some, related to the French influence.  To me the culture was also their own; without much concern about where they stand or how their development was going, if anything just a bit inquisitive related to still being somewhat isolated (again, not Bali, but that's essentially a resort island).  My wife didn't care for hearing the Islamic temples' call to prayer during normal sleeping hours but to me it was great how religion and culture weren't really an issue.  Until we tried to buy beer; odd you'd just expect that to be available everywhere, outside a place like Saudi Arabia, but not so much there.


The people were great too, but that starts a drift into me just being attached to the trip and those experiences.  People are ok everywhere, according my own limited experience, but Indonesia was really worth a look.