I'm reviewing an additional sample of a Darjeeling provided by Gopaldhara (many thanks to them for providing those), following an initial post of a very nice first flush version.  The teas are great, and interesting, so other posts will follow.


This tea (described on the vendor site here) is a good version of what one might expect of a Darjeeling; a true black tea, and a second flush type at that, so heavier on muscatel and other fruit elements.  Even still dry the tea seems just how it should be, with the dry tea scent including plenty of muscatel, along with malty sweetness and citrus tones.

One aside before I get into the review, about the idea of cultivar (plant type).  This tea is presented as from a Chinese tea plant (see prior link), which would have to mean Camelia Sinensis var. Sinensis, versus var. Assamica.  I've not done the appropriate research yet but it's my current understanding that Ceylon and Assam teas are typically all from Assamica plants, but that Darjeelings are not, that problems growing Assamica types in that region were addressed by changing to the Chinese plant types (var. Sinensis).  Here is a Hojo vendor post that essentially covers that, just not in much detail, also including the idea that the var. Sinensis plants have intermixed with Assamica type plants (to some degree), so per that source and some other reliable input they would now be a hybrid.  I'll get back to all this in another post; for now on to reviewing this tea.


The taste matches the scent:  lots of grape / muscatel, a bit of citrus in the range of orange zest, with a rich, earthy malt base for context.  The flavors are clean, with no edge of astringency, just a little to give it a fuller feel (even more interesting related to plant-type concerns, but I'm not going there).


From there a number of more subtle elements give the tea the effect of complexity, all in a pleasant presentation.  That earthiness is really at the edge of the mineral range, reminding me of red sandstone from slick rock hiking back in the Utah desert.  As one taste aspect can seem connected to a body or feel aspect a bit of dryness goes along with that, more in the second infusion I prepared than the first. 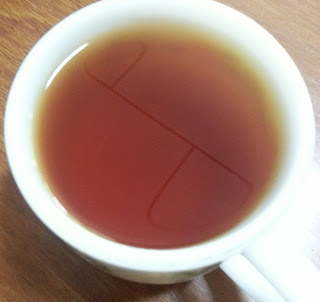 A slight touch of cinnamon spice also joins in, but it's quite subtle, nothing like the effect when that's a main taste element in a more roasted oolong.  It's a good match with the muscatel, citrus, and malt.


The tea doesn't have astringency one would need to brew around but it seems experimenting with brewing temperature could shift that effect, the feel of the tea, along with minor shift in flavor elements.  Brewed a little cooler the effect is of a softer, fruitier tea, with earthy aspects and a dry and fuller body coming out at relatively hotter temperatures.  Typically one would brew Darjeelings at a bit below black tea range to push the flavor effect and lighten the body, per my understanding.  Experimentation would determine how that corresponds to personal preference, and it might make more sense related to teas that are less oxidized, depending on that factor.

About tea batches, different products from the same harvest


It's my understanding that some tea growers and processors really make different versions of tea more than one might notice, based on typically buying tea branded as one uniform type from one harvest.  I just discussed an extreme example with a tea farmer / processor--my favorite one, who doesn't even need to be named--in the form of Dan Cong teas made and processed separately from a single tea tree.  She said that's rare though, because it puts a lot of processing demand on the tea maker.  That's not just in terms of extra labor for keeping leaves and batches straight, and working in smaller lots, but also related to tying up processing equipment.


I read of a more recent example from Taiwan, which might be a more common case, of a vendor preparing teas from different slopes, facing in different directions, resulting in different characteristics.  That was in a popular media post, good to see, and related to Tealet, a name that might ring a bell.  An online friend and knowledgeable tea guy, Peter Jones, recently posted in a Facebook tea group about trying teas harvested at different times, across a span of days, with a lot more variation than one would expect, as partially cited following:


Each sample was harvested 5 days apart. The goal was to see if we could taste the differences as the leaf age changed as we covered about a month of growth over the FF harvest....  Everyone seemed to think there was a noticeable shift in flavor around the 20th day. Light, floral in the first sample to piney, subtle muscatel flavors by the end.


Fascinating!  Related to an earlier post about a Ceylon black tea tasting like mint the tea maker said that flavor element would only be present for a short window, so catching it had to be intentional, and properly carried out, even potentially impossible depending on unfavorable weather variations.