I visited Luka cafe in Bangkok and reviewed a tea there not long ago (in March, a Bai Mu Dan / Peony, here), and just made it back for another lunch recently.  I tried a second tea, so I'll say a little more about that, and I bought loose tea there this time, so I can pass on how that works there.


I tried a standard, better Ceylon black tea (UVA from Malou tea, with another FB contact here), from the pricing sold as a medium grade tea.  The description was limited, mentioning fruitiness.  There was actually  a noticeable mint aspect, not so much in the range of fruit, but a little, and of course an underlying earthy-range context.  The astringency wasn't so intense, just adding some body and dryness, and the flavors were clean.  The overall effect was well balanced, so it seemed nice enough.  "Nice enough" may not be clear enough; good versions of any tea can't be taken for granted.  One could go years here without running across comparable versions of this type, standard as it may be according to some reckoning, so I did appreciate it.

Natural mint flavor in a tea is a bit unusual.  The other type I've tried with a related pronounced aspect is Ruby black tea from Taiwan.  Too much might really throw off the general effect of the tea, and I could imagine people either loving or hating it.  I'm in the middle; such a tea wouldn't be a favorite, and could come across as positive, but I'd just as soon pronounced fruit or floral aspects stood out, of course matching the tea type.  Different can be good, though, and no one would mistake this tea for a Taiwanese Ruby, so the novelty was nice.

The do-it-yourself aspect of this tea presentation could be a hurdle for some.  They provide a tea brewing in a device similar to a very small pitcher using an infuser basket element, and it's up to the customer to decide when to pour it out, and to manage not over-brewing the tea when only a third of it is going to fit in the cup they serve it with.  The idea seemed to be to taste it until it seemed ideal then set the basket aside, which really would work.  I let it keep brewing to try the tea over a range of strengths, because I'm inquisitive like that.  Although the basket barely makes contact with the water once two thirds of the tea has been drank (after two small cups) the last cup was still a bit "brisk."

The tea wasn't naturally overly astringent so it stood up well to being drank as light, medium, and strong-brewed versions.  Someone really into optimizing tea brewing might be a little freaked out by that (most tea enthusiasts), more into drinking the tea one best way.  Not all tea types work so well across a range, but this one did.  But then one could just use tasting as opposed to timing (proportion always varies, and the clock started on infusion back in the kitchen), and pull out that basket.  As during the last visit it seemed odd not re-brewing the leaves, essentially leaving behind half the potential of the tea.  That would be more upsetting for a better version of a tea, for the peony / bai mu dan style I tried that first time, for example.  This Ceylon black was nice but after the three small cups I was ok with stopping, even if the leaves weren't really done.

Per discussion with the tea-partner manager the tea-service approach is to keep it simple for customers, which I can completely relate to.  Once you bring out the clay pots and timers you might make someone already into all that happier but you can make a very nice pot of tea without such gear.  There is some allowance for teas of different styles working out differently, but it seems likely they've thought all this through, and aren't selling teas that would be likely to be particular.  An example might be a Dan Cong I tried recently, a tea version and general type that really needs gongfu style brewing--short infusions and a higher proportion of tea to water, more or less--to exhibit the better aspects. 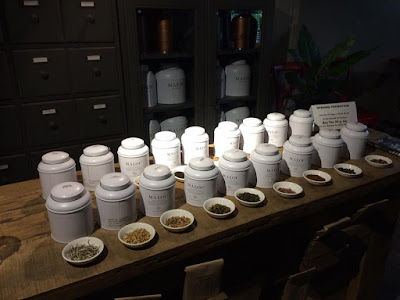 I bought the peony / bai mu dan tea I had tried during the earlier visit to take away, 50 grams of it.  The price was pretty fair, 375 baht for that much, just over $10.  The conventional black tea version would have been less, and for people into such teas maybe also a great value.  I really do like softer, fruitier, var. Sinensis versions of black teas better, or at least a different form of Assamica black tea style (see countless related posts, even though I'm more hung up on oolongs).  I should mention that this Ceylon peony is not something you see here in Bangkok; I don't think I ever have, in spite of putting time in at shops and cafes over some years.  There was a vendor importing only Ceylon teas at a recent tea Expo and although they had a nice selection of products it didn't include one.


Based on tea aspects alone I might just go with an upper-middle range Chinese version instead but factoring in the novelty I'm really looking forward to trying this tea a few more times.  It seemed the kind of tea that could change character based on adjusting brewing, but at the same time the kind of tea one couldn't easily ruin, so a nice tea to experiment with.


They were selling a broad range of plain teas and blends, so I might say a little more about that.  Typical plain tea examples include a Ceylon silver needle-style tea, a Thai oolong (lightly oxidized, of course), Longjing / Dragonwell (my favorite green tea, in general), and a few other conventional forms of Ceylon black tea, different grades / preparations.  For plain herbs I remember seeing chamomile, a lavendar / rose (plain in the sense of mixing two flower types), some variation of a blooming flower tea, and rooibus.  Blends included a rose black tea and mint tea blend (based on green tea, I think) that smelled exactly like toothpaste.


Is it coming across that this is me being positive about that selection?  Good versions of plain, single type and source tea are what people should be drinking, per my preference, and it's nice that the quality is there for the relatively standard price level.  It's also nice that other types of offerings related to different preferences are represented, the blends and such.


To help place this tea in relation to alternatives, I just gave 50 grams of a nice peony / Bai Mu Dan style tea (a Chinese version) to a monk for a gift, a Tea Village version I'd bought for some other reason, that had cost just over $10 (the same).  I've had that tea before, and it was probably a little sweeter and more floral versus this version.  The Ceylon fell in an earthier range, as I recall, but was still a pleasant, subtle tea, quite unique and interesting.  I hope that karma / merit process does work as directly as Thais tend to believe, and I'll be doing well on both ends, set up for karma and still drinking nice tea.


I've already touched on the cafe aspects in the last post but I'll say a little.  The food was also nice; I had a sloppy meatball sandwich--intentionally made that way; I'm not criticizing the sandwich for being messy--that would have been a good version of the same back in the US.  Salads my companions ordered looked good, and the deserts, and one other had a nice looking updated version of a burrito, quite common in some places but that doesn't come up much here.  Here in Bangkok "good Western food" is not so simple a range to pin down.  It's easy to pay a lot for food that one could make a much better version of at home, and I don't want to even get started on what some places do to Italian food.  Suffice it to say that it wouldn't be easy to make food this good, and it would be a tall order to make better; they're on it.

The decor is interesting, sort of modern-industrial, with a sub-theme of being a furniture display and sales outlet.  The pricing is higher mid-range for Bangkok (500 baht lunch range; under $20, so normal for other countries, or even low, but here that seems like more).

All in all I'd recommend a visit, and ordering and carrying out some tea as well, although personal preferences factor into that.  They aren't carrying or selling the highest range Chinese teas but there is plenty of selection to choose from, and if you know what you are looking for some would stand out.  You didn't hear it from me but I've even heard the coffee is ok.
Posted by John B at 12:33 AM