I vacationed in Indonesia not so long ago and more recently ran across some exceptional Indonesian teas.  I'll try to say just a little about Indonesia and describe the teas I've tried, definitely a tall order for a short article. 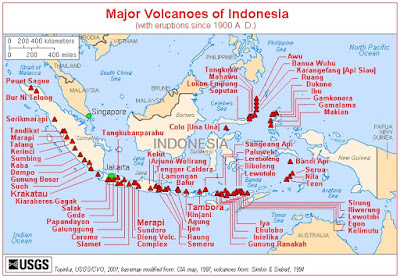 This interest started for me during a visit to Java and Bali last December.  I went through a similar discovery process after visiting Vietnam awhile back (we live in Bangkok, so both are sort of local travel).


I absolutely love delving into new regions, and beyond tea Indonesia is amazing, crowded with ancient temples and active volcanoes, and ringed by beaches.  There are 45 active volcanoes on Java island alone (more on those here).  My wife considered cancelling the trip last December after hearing about earthquake activity there (see this related reference) but all that isn't as scary and dangerous as it might sound, just normal for them.


The people were among the warmest, friendliest people I've met in any country, even compared to Thais, who really do smile more than most people.


How Indonesian tea is unique, about regional variation


It's difficult to specify common traits in teas from a region like Darjeeling, although some patterns of styles and tea characteristics do stand out, but for whatever reason it works better for a country like Thailand.  Indonesia is a bit different.  Climate and volcanic soil types provide a common growing context, to some extent, but types of plants grown and styles of teas are still evolving there, especially for better specialty teas.

Articles in popular press tend to claim that few Indonesians are aware of this category of tea, of better versions of tea produced there.  The claim is that the best teas tend to be exported (the opposite of what one hears about countries like China), although to some extent that is probably starting to change.  Galung Atri, one owner and tea maker at the Toba Wangi plantation, a newer family ran tea business, says that most of his teas are still consumed within Indonesia. Some are from local Assamica plants, other from modern hybrid cultivars imported from Taiwan (in particular using the Si Ji Chun / Four Seasons plant type), with style and processing influences from China and Japan.

Galun's own input about the teas and processing is interesting (with more background in the linked profile interview):


We have two plantations as I mentioned before, both growing a single clone tea plant type, Sijicun for Sinensis, and Gambung 7 for Assamica (best for white tea).  The oldest tree just around 5.5 years old, and the youngest one just one years old...

I have more background with the Wuyi style techniques...[and] prefer the Wuyi styles the most.  I tend to modify processing a bit for my technique.   ...producing this Chinese style tea is more like an art.  It depends on climate, weather, plucking time, condition etc., and China and Indonesia are really different in terms of growing conditions.


My experiences with Indonesian commercial teas

They aren't bad.  A range of teas are sold in grocery stores that might not be acceptable for slightly spoiled tea enthusiasts but the teas are far better than standard versions of Western tea-bag tea, and might cost even less, quite close to free.  Jasmine black tea is a common local style, of course with green and black tea also sold.  Oolongs are not so commonly produced, but buds-only silver needle-style white teas are more widely available.


There are plantations in both the East and West of Java.  It's perhaps not exactly their main island, since Indonesia doesn't seem set up that way, but it is relatively populated island with Jakarta located there.  Different plantations would make different types of teas, and people on Java could easily enough visit those to try teas, or travel to other islands where tea is produced.  We visited Wonosari plantation near Yogyakarta last December, a former Dutch plantation.  The teas were good, and interesting, but sort of ordinary level, not mass-produced tea in the normal sense but not quite on the normal level of specialty teas.  A silver needle-style white tea was an exception, a very nice tea.


I first tried a Harendong plantation black tea over a year ago, and that helped spur an ongoing interest in better black teas, a recurring theme in my writing.  The teas I've been trying this year from Toba Wangi are equally amazing, great teas in an interesting variety.  The styles of those teas becomes difficult to describe, more about discussing inputs and tea aspects than pinning down a general type, but they were mostly influenced by Chinese tea styles.


One nice black tea reminds me a little of better versions of Assamica teas from Thailand, not exactly like any Indian, Chinese, or Sri Lankan teas I've tried, different than Vietnamese black teas as well, but maybe closer to those.  A Sinensis based black tea was very similar to a Chinese black tea style, malty, sweet, and soft, with a taste range including dark cherry, wood tones, and yam.


The one Toba Wangi oolong (Wu Mei) reminded me a lot of a Dan Cong (which I compared directly in this review post).  Unlike the other Dan Cong examples I've tried there was no characteristic astringency, so I mean it was similar in the sense of the sweet and intense floral flavor profile and general effect.  Astringency is not always a bad thing, of course, in the right amount and presented the right way, and a mild version is a nice compliment to the fruitiness of some Dan Cong teas.  The Wu Mei also works well for being a smooth, mild tea, and if someone's preference is to brew their tea a little stronger it still works really well across different brewed strengths.  Their White Beauty white tea is even more unique, not like anything I've tried, sweet and subtle with a nice fruit element.  I think I would have been even more impressed by it if the Wu Mei oolong hadn't set the bar so high, and didn't match my own personal type preferences so well.

It's my understanding that processing has as much influence as the other factors in the final result, so it's not surprising that more style consistency doesn't emerge, that the teas can come across as novel interpretations of Chinese teas.  To clarify that, I mean that Thai lighter oolongs made from Jin Xuan or Ruan Zhi or Si Ji Chun are consistent in style as much because of drawing on consistent processing methods inherited from Taiwan as from growing in similar conditions.

Indonesian producers are still exploring stylistic inputs, as Galung of Toba Wangi said still integrating practices and knowledge from other places, in addition to growing new types of tea plants.  For example, one of the owners of the Harendong plantation mentioned developing a tea roasted in a certain way to mimic some of the flavor elements typically found in coffee (maybe somewhere in between a Dong Ding style and dark-roasted TKY?).

This is even more interesting in light of the long Dutch tea history.   This type of openness to experimentation and related positive results makes it an interesting time to try Indonesian teas.