Another great Indonesian tea!  They actually call this tea silver hairy buds (with more about Bangit Wangin on Facebook, here) but it would be typical for marketing to reference silver needle,  even though some reserve this as a partially regional designation.

The dry tea is very aromatic, sweet and floral, with just a little muscatel.  This seems to be a typical profile for Indonesian silver needle style white teas (the floral part), but it's no less positive for resembling others that I've tried, and it might be that extra bit sweeter and more floral.

The taste is sweet, floral, and full, with a notable smooth, rich feel.  The primary taste is familiar,  floral in the range of a light smooth lavender (but then, for the millionth time, I'm better with other scent-memory than flowers).  Beyond that there is some complexity of flavors going on.  The sweetness might vaguely resemble a light honey, but that doesn't seem to add much.  The difference between this and other Indonesian silver-needle style (buds only) white teas is that of intensity; this tea is really sweet and floral.


In terms of flavors it's all a bit subtle, not lending itself to writing out a list.   In fact I keep drinking it and I'm stuck on that point:  what else does this tea taste like?  I fell back on a tasting trick, thoroughly washing my palate with plain water to get a fresh taste.  Some of that mineral richness I've come to expect in Indonesian teas had been there.  Between that and the sweet floral aspects there is a rich flavor element, along the line of sunflower seeds.  I get a faint impression of spice but it's not clear enough to put a name to it.  Going beyond that I might just be daydreaming.  For as bright and sweet as the floral aspect is someone picking up fruit wouldn't seem unreasonable, maybe in the range of some type of berry, or tied to that muscatel scent element, I'm just not pinning that down.


A friend visiting from Indonesia (Jakarta), Rodino, passed on the tea, along with a couple of others.  He just started writing a blog about tea himself, or really beverage themed in general.  I'll probably keep drifting back to the subject of Indonesian tea for having a friend on the scene there, a very good thing given how nice the teas I've tried so far have been.  It makes sense that agriculture would go well there based on how Indonesia looks (see related post on a trip there), a paradise for plant life, aside from the odd catastrophic volcano eruption, and even that must be great for the soil, once the devastation subsides from the more intense versions.


Giving this tea longer soaks over more infusions keeps bringing out lots of flavor, moving into clean wood tones, still sweet but less sweet.  The smooth fullness switches over to a more textured fullness, towards dryness but not dry, all aspects that work well together.  Some versions of white teas, silver needle-type styles in particular, can be a bit too subtle for me to enjoy as much as other types, just hinting at some mild earthy tones, but this was nothing like that.

It might help to compare taste this with another Indonesian white tea, and I do have a bit of a couple left, even one type I never opened from that trip in December, but I didn't get to it around the time of the initial tasting.  An online friend visiting Bangkok gave me a good bit of this tea so I could, but instead I'll just compare based on tasting another later.

Comparison tasting with another Indonesian white tea, over different days


I tried the Toba Wangi silver needle style tea for comparison, just not side by side, two days later. I'll have a go at comparing based on memory.


It's less floral and sweet than I remember the Bangkit Wangi, but since a floral aspect is a main component there seems a chance they are more equivalent in this respect than I'm remembering.  The floral element is rich, sweet, and luxurious, just not as intense, and as usual hard to place by description.  I looked back to find an earlier review but apparently I'd only mentioned it in the post about a Bai Mu Dan style white from this producer, White Beauty (some good tea). 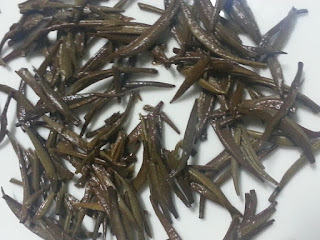 Beyond those aspects there's also a mild earthiness, which comes across a bit like chamomile, but much fuller and more complex, in part approaching the range of dried hay (in a good sense).  This played the same role as one closer to sunflower seeds in the Bangkit Wangi, just shifted a little in taste.


My general impression from this tasting is that it's in between those mild-flavored whites I was referencing, mild teas that you feel as much as taste, and the Bangkit Wangi in terms of really intense, distinctive flavors coming across, especially in that floral range.  It does have that full feel a lot of nice white teas have, in this case so pronounced it almost felt like a roundness, even though I'm not sure myself what that means.

I cold-brewed the tea, not able to put in enough infusions to finish it in a session, storing it in the refrigerator with warm but not hot water to be drank again the next day.  Somehow that really drew out a much more intense sweetness and floral effect, in the range of those sakura (cherry blossom) green tea bottled teas, but a bit better for being natural, and not based on green tea.  It made me wonder if the tea couldn't provide a range of different results based on variations within conventional brewing parameters.

Where was I going with this comparison again?  Regardless of that, these exceptional versions really have me coming around to silver needle style whites, but for Toba Wangi's teas I'd go with the White Beauty instead for novelty.  This does seem a natural place to close but since I was already discussing the Bangkit Wangi teas a little with Ronald, the plantation manager, I'll add a little more background on that tea, what might have led to it being so intense (for a white tea; they do tend to be subtle).


Input from the Bangkit Wangi owner about this tea

Ronald mentioned the Bangkit Wangi silver-needle style tea is based on Camelia sinensis var assamica and from Gamboeng clone.  It seemed really sweet and floral to me to be based on an Assamica type, but then I'm not as familiar with white teas as others related to different general type and cultivar origin inputs.  That does help explain how those buds could be so big.

He gave the following input that he felt contributed to the tea being as sweet and intense as it comes across (only edited slightly to keep this short):


These two seem to go together, don't they?  Strong, mature plants develop healthy supporting root systems, and these roots enable plants to take advantage of natural irrigation paths within the ground.  This distribution would surely both filter the water and add minerals to it.

Our plantation recieved an organic certification in 2007...and at this time we don’t use any pesticide whatsoever.  We found out that the plant itself is getting stronger in battling their common enemy such as pest and wild bushes and weed.  So by looking at this we can be sure that the tea itself is building their own immune in battling the common pest and also fighting for nutrients from common wild bushes to feed the young bud leaves.

This last idea is one I've heard claimed of Wuyishan area teas as well, that only the strongest plants survive the various external challenges, and that supporting the plants by providing a pest-free environment throws off the natural balance, and can impact the taste of the teas.  Who knows, really, but it's also familiar from the case of Bai Hao / Oriental Beauty teas that a seemingly negative input of insects biting plants' leaves can potentially have positive effects in the outcome of teas.

Another interesting idea we didn't discuss, that tends to come up, is that the influence of other types of plants can change flavors in tea plants growing in close proximity.  Again, who knows, but somehow all these factors together did work towards creating some exceptional characteristics.  Processing is another significant factor, with this plantation drawing on roughly 100 years of experience.  Maybe that's not so long by Chinese standards but plenty of time to sort out making some very nice tea.
Posted by John B at 8:02 PM