This post is about directly comparison tasting a 21 year old tea from Tea Side (an aged Lao Chin Shin Thai oolong) with a 30 year old tea from Hojo (described as a Dong Ding).  Why review two teas at the same time?  Good question. 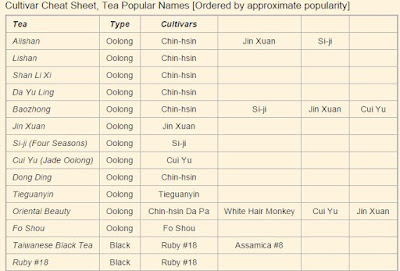 The idea was to try to identify common aspects related to aged teas, if such a thing could be done.  If two teas aren't very close in character drinking them together, at the same time, can just make it more confusing, by bringing on a bit of overload.  That's sort of how it worked out but it was interesting anyway, and there was some common context, if not so much similarity.


According to one online reference (see following table from the Tea DB site) given that Dong Ding typically is Chin Shin both teas would be the same cultivar, but of course standard types used for a region doesn't always hold up for a specific version.


Twenty one years is a long time related to the Thai tea industry, still in it's infancy then related to its modern commercial form, unless one considers there really are very old tea plants here, so some forms of making tea go back centuries.  It's my understanding--perhaps not much of a reference source, what sticks in my mind--that one main basis for modern Thai people was immigration of Southern Chinese people on the order of 1000 years ago, with advanced practices like making Chinese pottery imported here later, in response to varying export limitation policies by Chinese government.  That would relate to old forms of Chinese government, to us, but given the span of their history perhaps those were relatively more modern developments by Chinese historical standards.


At any rate it doesn't take much for one person to bring tea harvesting and processing knowledge with them from one country to another, so the state of the industry in Thailand in the 90s wasn't so relevant; the skill of the people involved with making this particular tea was instead.

For the first infusion the Thai oolong (21 year old Tea Side tea; I'll reference these by vendor, not that it matters) started to show some nice character,  dark caramel, and earthy tones hard to make out.  At first the Hojo tea (30 year old Dong Ding origin / Taiwan-originated oolong) tasted old, and not in a good sense, musty, hinting towards peat and mushrooms under that.

By the second infusion the Tea Side tea was picking up a lot of complexity, earthy wood tones, some dates (or could be raisins), a dark caramel / toffee; good sweetness and richness in general.  The Hojo tea got even worse, from tasting like something that had been stored in an attic towards tasting like the floor boards in one.  There was interesting complexity under that but it was hard to pick up and appreciate under the nasty front end flavors.  To be fair, the friend that gave me the tea said he didn't notice this mustiness in his version, from the same package, and another friend advised giving older teas several washes rather than a more standard quick one to offset any storage taste issues.


My two year old daughter helped me with the tasting, and on the first infusion she agreed the Tea Side tea was much nicer.  By the second infusion she would only taste the Hojo tea but would pass on actually drinking it, just taking a sip and handing it back.  I think she would have agreed that the Hojo tea drew into a more even range after a few infusions but she had dropped out of the tasting due to us limiting her intake of tea.  It was a little odd that the similarly aged Tea Side tea had no issues with any mustiness to clear up through initial infusions, which one might guess related to storage conditions.


On the third infusion the intensity of the Tea Side tea kept picking up, with flavors transitioning, now more like roasted nuts (non-specific nuts, maybe).  There was a trace of rusty earth tone that reminded me of those found in some red wines, not in most versions, not so much in Californian wines, more in the Burgundy range, with just a hint of a component.  Of course the tea didn't taste a lot like wine.  The sweetness was still very nice, altogether a great, complex balance.


At the same infusion the Hojo tea flavors started to clean up, moving to a roasted chestnut effect.  The tea might work out.  Some sweetness finally started to kick in too.  An earthy element was in the range of a tree bark; different, not bad really.  The mustiness was still there but as a faint background element, no longer a negative factor.

Finally less transition was occurring on the fourth infusion, but both teas did change slightly.  The Tea Side tea softened and became slightly earthier, just a little towards a dark wood / leather range.  The Hojo tea flavors cleaned up just a little more, with the mustiness essentially completely dissipated,  with more mineral tones joining in.  The roasted nuts taste shifted slightly to a light wood, but still quite nutty.

I went a little longer on the fifth infusion to keep the flavors standing out, and the interesting character of the teas was all the more so for concentrating fading flavors and changing body.  I might point out that someone inclined to drink very wispy teas, as many would be, could have went much farther in an infusion count covering the same ground.  The teas weren't brewed strong, not even approaching that, but the range of light to medium is very broad, and a more medium strength seemed optimal for allowing for really experiencing the complex aspects in both.  Both teas had a nice body, a good feel to them, just not the fullness and thickness other types of oolongs tend to show, and certainly not a lot of astringency in terms of having an edge.  One of the vendors (Hojo) mentioned that the tea was full flavored but approachable, suitable for all sorts of different people, and I would agree with that, although I would think a reasonable amount of experience would help someone more fully appreciate the range of what was going on with both.

At this stage the sweetness was hanging in there in the Tea Side tea, even though it was fading a little.  The dark caramel and leather moved a little into an unfamiliar wood-bark spice range, not exactly cinnamon, a different one, like one of those intriguing but unfamiliar scents one picks up in an Asian spice market.  The Hojo tea was still getting sweeter, picking up a root spice flavor, in the range of sassafras, a bit bright and round, right in between earthy and fruity; definitely something different.

I tried a relatively shorter infusion next just to see how the effect changed drinking both lighter.  With that complexity and taste range they were both still quite pleasant, holding up well.  Brewed even lighter the Hojo tea tastes still stood out, something related to that flavor range at that stage.  The Hojo tea was interesting, and quite pleasant, and both are unique, but the Tea Side tea component of dark caramel / toffee really worked well with that interesting range of earthy flavors, so it came across as a bit more pleasant.

At infusions beyond count the flavor balance of the Hojo tea got even better, although it was thinning a good bit.  The Tea side tea was still nice but thinning even more, but then it had been at it awhile.

The taste of age

I've tried aged oolongs before but it's not such familiar ground to me that I can reference it against lots of other similar teas.  When people describe such teas they often don't get far, citing something vague and a bit circular like "it tastes of age."  Both did express an unusual complexity, and beyond that there was an underlying feel to them in common, an impression I couldn't completely place.  I may not have had great versions before but I've not been very impressed with the few others I've tried, but of course it doesn't work to judge a type by a few examples, for all the obvious reasons.

It's common for people to express a lot about aftertaste or feel related to aged teas, having some effect on the feel in the throat, for example.  With so much going on with tasting two I didn't make an effort to spell that out in the notes, although there was more to the experience than just those complex tastes.  Of course one really shouldn't drink two teas together if the idea is to observe the effect of the tea, the qi, but I'm not particularly tuned into that anyway.

It goes against convention but maybe vendor's descriptions could shed a little more light on all this, starting with the one from Tea Side:

Taste:  A thick, deep taste with rich aroma of cherry, chocolate, sweet red apple. Velvety aftertaste of aged tea with cinnamon and bark notes. It is not like any of the Chin Shin Oolongs that I ever tasted....  In addition to amazing taste and flavor, it gives a very powerful state. By the third-fourth brew different metamorphosis of consciousness begin to happen. The tea has a calming effect, it always brings relaxation to my mind and body and fills me with tranquility and light euphoria....

So my tasting notes missed some of that flavor list, but it was a really complex tea, with a lot going on.  He mentions in a part of that write-up that the tea can vary a lot with different brewing approaches, something I intend to work on verifying.  That definitely matched my impression; it had lots going on, and I didn't feel like I was going to spell it all out in that tasting.

On to the Hojo tea description:

When you drink this tea, you feel a dried fruity flavor. 30 years of maturation makes taste extremely smooth just like vintage brandy.

It was odd that even before reading that the Tea Side tea did remind me of the effect of aged wine (the reference here is from the tasting notes, written before I read that page description); not so much this tea though.  They also explain that ball-rolling was started in between the present time and 30 years ago, which explains the more open leaf presentation of this tea.  Of course I couldn't verify that, but it is interesting that both teas look similar in that regard, with leaves slightly rolled but nothing like the standard form today.

The age made it hard to factor in differences in oxidation or roast, since changes over time combined with the original style inputs of the processing.  I would assume that neither started out as a very lightly oxidized oolong, and that a mid-level roast gave both a complex flavor base as a starting point.

Both teas were interesting, a bit different than any others I've tried, very complex, with lots going on.  I will say this about the Tea Side tea, which I guess helps place the impression it made on me:  I  ordered some before I posted this, just in case.
Posted by John B at 8:29 PM