Black and oolong teas from Nepal


After reviewing a couple of really nice teas from Nepal a friend passed on (a Himalayan Orange most recently, and a Shangrila White prior) I was happy when a vendor passed on some samples of tea from there, from the Nepal Tea company.  Those other two teas had been completely unique, different in style than other's I'd tried, so I was hoping for more of the same.  On to some reviews! 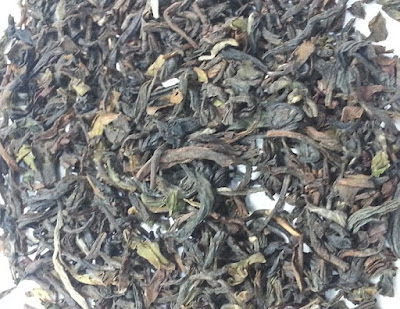 The dry tea look didn't give too much away, just showing off some varied colors, a bit different.  The dry tea smell was already unique, sweet, with a bit of muscatel, even a touch of smoke.  The taste I didn't expect, malty with a bit of the Sri Lankan briskness but with flavors tied to those in the Darjeeling range.  There was a lot going on to unpack; not so pronounced muscatel as the smell had hinted, but it was there.  Plenty of malt, raisin or date filled in more fruit, with a touch of citrus, along with just a little dark chocolate, and some of that base of flavors in the floral range.

The malt and astringency would make or break the tea, depending on preference.  It didn't have much bite to it, not "brisk" as some black teas can be, not extending to dryness, but plenty of that feel and structure.  It seemed definitely closest to a Darjeeling but not exactly the same.  There is something cool about the effect of the tea, which is usually not how black teas go, typically generally basic stuff, with exceptions like good versions of Dian Hong.  It's not like that, exactly, but there is a nice juiciness to the feel.  After the malt and that astringency structure and fruit rolls over your palate some sweetness and fruit aspects remains.

Maybe that run of pu'er tasting has me overdoing it with trying to feel teas and examine aftertaste but it's interesting the way the sweetness and fruit, along with a light mineral edge, remain on the sides in the rear of your mouth.  It's not like an oolong taste profile lingering, where a close version of the same profile remains, since it strips the experience down to some related aspects, which lasts for another couple of minutes.  I'm really a fan of Chinese black teas, which cover a totally different range, but this also works. 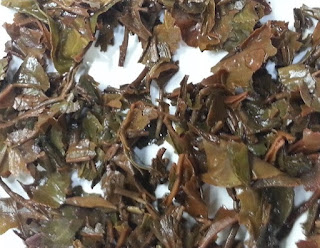 I eased up a little on the temperature and time for the second infusion, brewing a relatively soft and light version as black teas go, and that astringency backed way off, with lots of flavor remaining.  The tea is closer to a Darjeeling made this way, and it comes across less like a conventional black tea, just as those tend to fall in their own category.  The scent of the brewed tea leaves covered a slightly different aspects range than the tea itself, towards stone fruit, but maybe closer to butternut squash, and I may have just been missing that in first infusion tasting.


The tea has good complexity.  Some aspects incline towards that mineral intensive Ceylon range and the fruit is like Darjeeling.  Even after an infusion or two (using a modified Western style) brewed tea tastes are still primarily muscatel and that citrus element, with the raisin / date / chocolate fading a little. 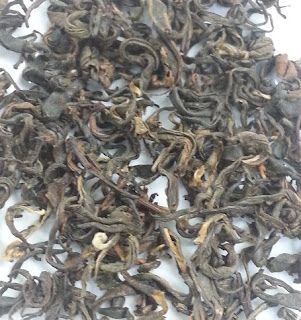 A bit odd to put two tea reviews in one post, but this sort of works into a larger story, and I wanted to compare aspects somewhat directly (although this wasn't a side by side tasting).

The dry tea scent is similar to a second flush Darjeeling,  with muscatel and malt, just a bit softer.  Brewed the tea looks like a black tea, on the reddish side.  Tasting it some differences emerge.

There is some muscatel, and malt, and the earthy mineral tones common to black teas, but with a soft feel to the tea.  The limited astringency that is present is in the range of feel for a black tea, a slight dryness, but there isn't much.  There are also citrus tones, and a rich flavor aspect out towards sweet potato.  Still sounds like a black tea, doesn't it?  Just not exactly. 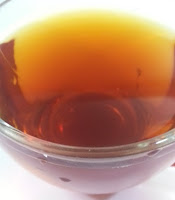 I wouldn't be surprised if it was processed like a black tea, just backed off a little during the oxidation step.  It's still in that range of being fully oxidized, maybe 80%, so right around the cutoff.  How would I know that?  I don't really, just a guess.  But I've been drinking a number of Oriental Beauty / Bai Hao versions this year, said to be oxidized at least 70% in some sources, so I'm going with my impression of those as a baseline.  Either way this tea is close to a black tea.


The tea is nice,  it all works, just not in the same way conventional oolongs do.  I'd expect that lots of Darjeeling sold as black tea is less oxidized, but then I tend to comment that's odd too, teas that aren't fully oxidized being categorized as black,  but so those can go.


On the next infusion a mineral component picks up that's interesting, not so easy to describe.  When someone describes a "mineral" aspect in Taiwanese oolongs or Wuyi Yancha they mean completely different things, two separate ranges, and this has almost no overlap with either.


It reminds me a little of the flavor aspects that seem to naturally pair with tannins in red wine, that rusty nail effect that can be found in French Cabernets, or also present in a softer, more pleasant form in Burgundies.  But the tea is not astringent, quite soft, so it only relates to part of the flavors profile in those wines, mineral-tone aspects that naturally seem to join with wines with those feels, not so much the feel.  I could have just said it tastes a little like red wine, but only that one part.  It's hard to drag it back to the range of tastes tea is usually described as, but lets try.


Per this prior tea flavor wheel minerals are described as volcanic, chalk, and granite.  That really doesn't help with Alishan oolong or Da Hong Pao; they taste like neither.  This is closest to granite.  It's odd saying for sure that it doesn't taste just like that rock, but I think it doesn't.  Then again, granite varies, doesn't it?


Of course it does; granite is a general category of rocks comprised of orthoclase feldspar, quartz, plagioclase feldspar, micas, and amphibole.  Of course I looked that up, and I really don't know what those smell or taste like.  This was already plenty of tangent but one more interesting aside from that same reference source about what granite really is:

In the commercial stone industry, a "granite" is a rock with visible grains that is harder than a marble. Under this definition, gabbro, basalt, pegmatite, schist, gneiss, syenite, monzonite, anorthosite, granodiorite, diabase, diorite, and many other rocks will be called "granite."


Cool!  Would be nice to scratch and sniff all those rocks sometime.  Where was I going with this again?


Right, describing a Nepalese oolong, that tastes like a black tea, and a little like stones.  I'd need to re-taste the black tea and oolong again to see if the mineral aspect is the same, but it must be comparable.  I had the impression the aftertaste that a mineral tone was evident as a part of was quite different for both, and that the teas had a much different feel to them.  As a black tea drinker I love the oolong, but as an oolong drinker it's not what I expected.  Both teas are nice, and unique.  I think they share some common ground with the Himalayan Orange I reviewed not so long ago, but as always direct comparison tasting would help clarify that.


These have been a great start into exploring some new tea range from Nepal.  I think it will get more interesting from here, on to white teas, and a "golden" version.  I'm getting the impression that it's typical for teas from Nepal to challenge preconceptions related to typical styles, and it will be interesting to see how those different changes sync up with my own preferences.
Posted by John B at 10:31 PM