It's a tall order, but Cindy sent good-sized samples of three different Jin Jun Mei to try, so it seemed obvious to taste-compare all three together.  There were lots of noticeable differences in the dry scents, but it seemed as well to start with reviewing the brewed tea, not the dry tea scents.  Even that is going to be a bit much.  Comparing two teas in tasting is interesting, and it can really highlight minor differences in aspects, but adding making comprehensive tasting notes to a detailed review gets to be a lot, even for two teas (even for one, really, it can be much nicer to just drink the tea sometimes).  A few notes about impression of lots of teas would be one thing but a detailed, aspect-by-aspect review is something else.


The three teas are a golden Jin Jun Mei, a "good in aroma" JJM, and a "good in soup" version.  It's always seemed like people stumble over trying to translate whatever "brewed tea" works out to be in original Chinese languages.  It must be close to "soup," as Cindy has used, or liquor, as one also commonly sees, but brewed tea is not soup or liquor, as we use those words in English.  People understand what is meant, so either works, or dragging out the extra word and saying "brewed tea" would also do the job.  It's "soup" here, shortened from "good in soup" in that version description in lots of places.  Straight to it then.


The first infusion of the golden JJM is nice, right in that ideal range.  I would imagine a paragraph on that taste profile would just be a write-up about how JJM tastes in general, and then the comparison would vary from there.  I did struggle with a more general description in this post comparing the tea style to Lapsang Souchong (the LS version that isn't Jin Jun Mei, the type made of leaves).  Even that first part isn't so easy, about the type and general range.  It's a softer type of black tea, but very rich and complex, with good sweetness and a full flavor profile.  There are fruit and earth aspects to it, probably some spice layered in, and a slight dryness, but nothing like the dryness and earthiness in that last tea from Nepal I just tasted, the golden tips version.  That was a nice tea but these are some next-level teas.

No written description could do this tea any justice; kind of a strange place to start in doing a review, but that's how it is.  The complexity, that range of flavors you just don't ever see, the way it integrates, the feel, the cleanness, the way sweetness balances earth and other elements--it's absolutely off the charts.  I'm reminded of a comment about the wild Lapsang Souchong Cindy sent a sample of in a forum discussion (do I even need to clarify the tea wasn't smoked?):  it's just damned good tea.  Even the basic flavors list description is too much to grasp, too much complexity to describe as a list.  The others likely are too, in different ways.  This would be a lot easier if I'd just say these are three different related versions of damned good tea.

The "good in aroma" version comes across a little sweeter, a little lighter, across a lot of the same range but quite different.  It's a little sweeter, more subtle, less of the mineral undertone and butternut squash / yam range, more floral, but not exactly floral in the sense lots of other teas that describes are.  But then I'm not going to finish this comparison in one taste; I'll fill more details in as I go.


The "good in soup" version is completely different.  It's more like an unsmoked Lapsang Souchong (well, technically it is one, but you know what I mean, the other kind made with leaves instead of just buds).  It has more of a black tea taste, just not at all in the range of other black teas, more earth of a different kind and more mineral, not as sweet and light and subtle as the aroma version.  Mineral is more pronounced, a lot more tie to the other Wuyi Yancha range people are familiar with, which itself comes across in a very broad range.  I definitely don't mean the cardboard / dark wood / leather / cinnamon range ordinary versions of Wuyi Yancha exhibit, I mean the characteristic mineral undertone.  It's still sweet, still very complex, and would still be the best Jin Jun Mei most people have ever tried, by a good bit, but I'm not sure which of these three I'd like best yet.


On the second infusion the golden JJM picks up the flavors profile a lot.  This could be a tricky tea to brew in the sense that you want to get it just right to optimize it, not that it wouldn't work well across a range of infusion strengths or made in different ways, but you'd want to get the most out of it.  Brewed perfectly this type of tea can go from great to transcendent, at least great versions.  It's a bit complex to describe.  Earthiness picked up a little, almost like a touch of coffee, along with a hint of smoke, but still plenty of sweetness, in a soft, rich, full tea.  It's really amazing.  There's malt present, and that familiar Chinese black tea sweetness people attribute to yams or sweet potato, which to me is great or not so good depending on how it balances with other flavors--here working well, to say the least.

The soup version is moving off in it's own direction.  Now it's not like other JJM I've tried, or Lapsang Souchong so much, but complex, still nice.  It has a good bit of woody character, still a bit sweet with mineral tones but not like the others.  The floral / sweet aroma from the aroma version isn't really pronounced, and the flavors complexity in the golden version isn't present.  It is nice within the range it expresses but I think I like the golden version better, at this point in the tasting.

More of the same next infusion for the golden JJM.  It's interesting that flavors aspect range extends to include a touch of coffee like that, along with the normal range, sweetness, yam / sweet potato, and toffee, probably a touch of some spice, just not a familiar spice, in the wood-bark spice range but not cinnamon.  I'm not saying much about feel but it's what one might expect, rich in an unusual way, a bit "resinous," as fellow-blogger Amanda of Rambling Butterflies blog describes it.  Maybe it's not clear; that's saying it's a good thing, although I guess that would depend on preferences.  On the whole the complexity and the way all those different aspects come together is just great. 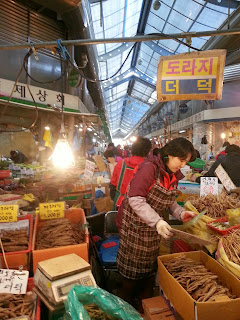 The aroma version keeps gaining depth.  Floral is shifting to a nice, light, subtle root-spice range, towards sassafras, although probably closer to some spice I'm not familiar with.  I'm reminded of visiting a spice market in Seoul, in a giant open room full of roots, tree barks, and herbs, being overwhelmed by a complex range of wonderful spice smells.  It was so amazing I could just stand and smell, nothing discernible, just a cacophony of experience, except related to smell and not sound, and pleasant instead of harsh.  This is much simpler but pleasant and unfamiliar in a similar way.


It is odd how the taste profile in the sense of one part of the range of experience is limited but a lighter, different range is so pronounced.  I get it, about the "aroma" description.  It's not that liquor-like aroma that some Wuyi Yancha express, lighter, complex, floral extending into all sorts of subtle range.  It would be possible to go a little stronger on the infusion strength to draw more body out of it, since it comes across as light, but I don't miss that, and the effect of the flavors in that "aroma" range is plenty to experience.


The soup version goes just a little further in the same direction.  When you taste it some component that hits your palate first is a little shocking, but it transitions into a rich, different range so fast it's hard to identify that element.  It might just be the shock of tasting it after the other two but I think there is something unexpected there, maybe in a wood-tone / vegetal range.  It also has a bit of root-beer character to it, and a little mineral, just not much.  If you drank this tea alone you'd likely say "now I get JJM," but alongside these other two there is a lot more range to experience, and depending on how preference plays out it could easily be a least favorite.  Or maybe a favorite; preference variation is odd like that.


All three are good teas, or really a bit better than what I usually mean by "good."  For other teas that are good but not on this level the experience is about appreciating one or more positive aspects, or complexity, or feel, or cleanness, but for all these it's just a given that the whole range of general positive aspects is sort of covered.  It's not about focusing on something positive, or appreciating that the range and effect is nice, but instead about narrowing into how unique aspects in the absolutely right kind of context relate to preference, or enjoying the synchronicity.  Or it would be nice to not analyze it, and just be swept along by all that.

Tasting these together feels a little like a turning point in my experience of tea, like that first visit to a decent tea shop when you think "I get this!"  Of course I don't completely get it, in the sense of a veteran tea expert completely placing a tea based on vast experience, but it all clicks a little better.

Relating to my own preference; I liked the golden version best, aroma next best.  The "soup" version wasn't a flawed tea, not bad or even in a more average range, it just didn't click with me in the same way.  I could easily imagine someone liking the "aroma" version even more, that to some it would capture the essence of what JJM is supposed to be; that experience is unique, the brightness, subtlety, sweet floral tones in a black tea, the balance.  A lot of people might not feel like it was a black tea, given how all that comes across, since it's absolutely the opposite of commercial grade Assamica based teas.  There is no astringency at all, not malty or earthy, much ligher, brighter, sweeter and more complex--in it's own way, in a limited scope.  It shares a lot with some aspects range of oolongs, in a sense, it just doesn't remind me of any in particular; it's unique.


I could imagine some people not liking the golden version; the mineral aspects leading into a coffee range being too much.  Since I love dark roasted oolongs (maybe mid-roasted a little more; not the point here) it's still on the lighter side of where that general range can lead.  Without the rest of the range, that feel, the sweetness, the other flavor complexity it might not work, but to me it strikes an incredible balance.


Taken together with the last wild Lapsang Souchong I reviewed from Cindy these teas have given me a new appreciation for Wuyishan black teas.  I get the sense I'll never stop turning new pages related to all the teas from that area.  It's nice when tea type just clicks, and you absolutely love that, and want to have very similar experiences over and over, but this experience is nice too, when those subtle variations add up to relatively new experiences.
Posted by John B at 9:46 PM