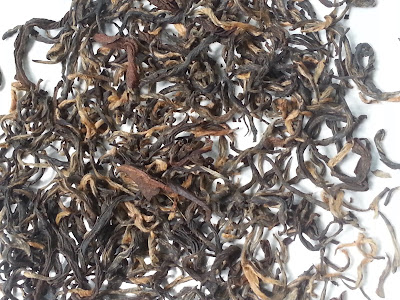 This post is a follow-up to an earlier review of teas from samples sent by the Nepal Tea company.

This Gold Tips version is not exactly what I was expecting;  I was thinking it would be more along the lines of a Ceylon gold tips or Dian Hong (which aren't that similar), but it reminds me of  Chinese style black teas more.  I can't say for sure what cultivar it's made from, or place it relating to comparing it to another specific tea type.


I'll start with mentioning what the Nepal Tea vendor says about the tea:

Kumari Gold is a special black tea produced by Kanchanjangha Tea Estate, which is processed from the young tea bushes grown and carefully nurtured in the foothills of Mt. Kanchanjangha.... A medium to full bodied tea with caramel, and baked fruit flavors, and a long lasting finish. Bright golden liquor. 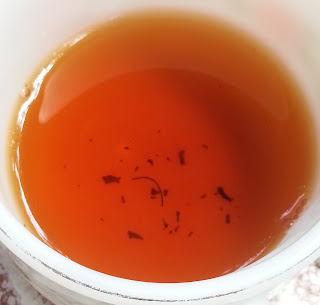 The smell is malty, a little sweet.  The initial taste has plenty of malt, and an earthy complexity  along with a bit of dryness.  The tea is nice, just a bit earthier in range than some of my favorite black teas.  I really like soft black teas with a lot of sweetness (and this one is soft, not astringent), with aspects  into fruit ranges the best, which is why I really loved a unique lapsang souchong I just reviewed that was heavy on orange citrus.


The flavors are relatively clean, with good complexity, a nice feel;  it's good tea.  Malt is joined by a bit of cocoa, but in a dry / earthy range, so edging a little towards peat.  That's not a bad thing, but it probably sounds better to compare it to something closer to a food, maybe tobacco.


A few infusions in (preparing the tea Gongfu style) the flavors soften and sweeten, become richer, but there never really was an astringency to dissipate.  The earthier flavors do transition to more of a fruit range but it's not pronounced enough to separate into a list of fruits, and it blends together with the diminished earthier aspects.  It's a good version of a tea in this aspect range, unique and positive. 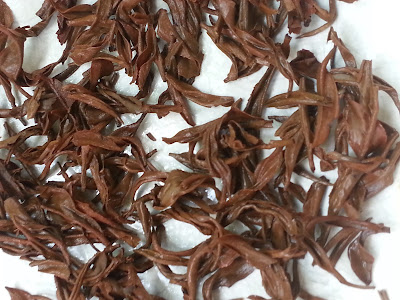 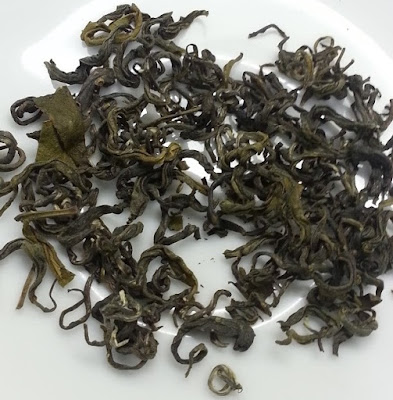 I think this was the Ganesha Green from Kanchanjangha estate, listed here on the Nepal Tea website.  My description of the flavor aspects isn't a perfect match for that website listing--vegetal, but not as kelp and seaweed mentioned there--but the rest fits.  Variations in identifying aspects is normal, and changes in brewing parameters or water or other inputs does cause real flavors changes.

They mention using lower temperatures for brewing, which is quite standard for green teas, on the site advocating "temperature 65 to 71℃ (150 to 160℉)."  That's a little lower than some recommend for green teas, but then there are usually two sets of green tea temperature recommendations, one for Chinese-style pan-fried green teas and a lower range for Japanese-style steamed green teas.  As with everything it comes down to preference as well.  In general cooler than for other tea types is going to work better; as for specific temperature people can sort that out based on experimenting a little.  The Kanchanjangha estate website recommends "The finest green tea is brewed with water at the temperature of 80 to 90 degree Celsius."  I'd think around 75 might be more of a standard range (170 F), even lower than that for steamed green teas.

The scent of the dry tea is not what I expected,  a bit vegetal, quite complex, with a cocoa aspect, and fruit beyond that.

The brewed tea is complex too.  It reminds me of a Vietnamese green tea, without so much mineral, and some aspects range that doesn't match.  There's just a touch of smoke, not pronounced, but it stands out for being unusual.  The tea is vegetal, starting out as green beans, but that effect is subtle,  the background context.

I'm not picking up a lot of cocoa or fruit,  those aspects hinted at in the day scent, but the complexity that is there may relate, and could develop more in the next infusions.  I'm preparing this tea Western style this time, for what that's worth, and I'd expect it wouldn't differ that much brewed Gongfu style, but checking by trying would be the only way to know for sure.  Part of that difference is to experience the transition of tea aspects better, and this tea does vary as it brews; it's not at all one-dimensional.  There's not much astringency; the feel is nice, not as full as oolongs can be but not thin, with no bite to it.

The smoke actually picks up the next infusion; odd since  I was expecting it to drop out.  The vegetal nature tones down a little and mineral picks up so it's even more like a Vietnamese green tea.  For people not familiar with those, that's a good thing, to me.  They have a nice flavor profile and feel, typically clean and a bit structured, even for moderate quality versions.  Vietnamese people tend to use boiling point water and ruin them because they like astringency, but you can't blame the teas for that.  My judgment that very astringent green teas brewed using boiling point water and long steep times have been ruined is just a preference, perhaps relatively standard among Western tea enthusiasts, but still not necessarily more correct.

This tea has good complexity.  It's hard to pick out aspects beyond those pronounced mineral and vegetal ranges (a little into kale instead of beans on the second infusion), because those are so pronounced.  There might well be a bit of cocoa; there's definitely a nice sweetness, and the flavors presentation is quite clean.  In the last infusions both the vegetal and mineral aspects ease up and it moves towards a neutral but full, rich flavor, in the range of dried hay, the kind of range that could be interpreted different ways (like mild wood-tone, or a sweeter version of fresh mushroom).  There's enough complexity and depth more probably is really going on than I've described but judgement about what that is would likely vary, and brewing variations could help draw other aspects out.

I don't always love green tea but this one is nice.  That might partly relate to not drinking many green teas this year, making it easier to appreciate them.  Or maybe after the last pu'er I'm liking that the tea is straightforward, with good complexity, but not a mix of different levels of aspects that takes sorting out.  Of course it comes across as fresh too, which is nice; it's green tea.


These are good teas.  It's interesting how "good" is so relative, and how good a tea seems to someone relates to preference as much as some abstract, objective quality level.  For more standard types trueness to type is also an issue, a tea tasting just like that particular type should, or in the normal range is more how that goes.  Related to teas from Nepal the producers seem to have freedom to develop styles as they like, not so constrained by a past history of standard versions.

Related to my own preference, although I typically like black tea more than green tea of these two examples somehow the green version clicked a little more.  I didn't get the impression that related to flaws in the black tea, more to me preferring certain styles within the scope of black tea more than this tea's style.  I might have even liked their more standard black better, which seemed more like a Darjeeling, just not exactly like one.  This black tea was still a good tea, and I'd be happy to drink more of it, but in general I like softer, fruitier, sweeter black teas, and this one was definitely on the softer side but with more malt and earthier in nature from there.  Others could easily have the opposite experience, based on having different preferences.

Comparing the green tea to a Vietnamese green tea could be read as a quality-level assessment by some, but I don't see it that way.  It does seem true to me that even many ordinary examples of Vietnamese green teas can provide good results, if brewed properly, but I didn't intend that as an implication in the other direction, that this compares to more commercial versions of teas from Vietnam.  The character was different anyway; it only had some aspects in common, for example a mineral and vegetal nature, but even these aspects weren't exactly the same.  In my experience--which of course is still limited--Vietnamese green teas tend to tip the balance of aspects towards more mineral with vegetal characteristics second to those.  Here's an earlier review of one, but my reviews were a bit thin two years ago, maybe a better balance would be in the middle, shorter than this one.  Longjing is my favorite green tea, for what that's worth, but how that maps out related to these isn't so clear.

Obviously enough I'm trying to balance just describing aspects in these teas, providing a narrow objective assessment, with including some of my own opinion about them, even related to my own preferences.  I appreciate your patience as I try to learn to communicate clearly if not simply.
Posted by John B at 12:35 AM