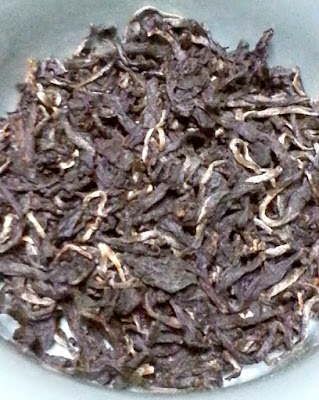 This tea needs no introduction, but I'll mention a little background anyway.  It's probably the one specific tea I've heard most about through other review and online discussion, the Lochan family / Doke plantation's development of their own signature style of black tea.  From the name alone it's a hybrid style, which I won't be investigating further in this write-up.  I'll keep it simple, a description of a tea.  That never works, but this time it will.


I should add that this tea was provided by the producer for review (many thanks for that).  I tried some teas from them awhile back, in 2013, provided as samples back then too, but scanning back I only reviewed one.  Their tea production is new enough that I've followed them online related to developing new styles since, but I've been all over the map trying teas from different countries since then, with no proper focus on any one of them. 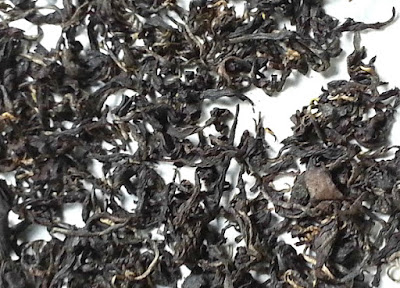 
The smell of the dry tea is nice, rich, sweet, a bit complex, with raisin or date undertones along with a bit of earthiness and other fruit, and probably some citrus.  The tea is small twisted leaves or leaf parts with some buds.

The first infusion I went a little light, brewing the tea essentially in between Gongfu style and Western style in a gaiwan, kind of typical for me.  I just tried brewing Longjing using a straight Western approach, and I'm sort of off that page so I liked it better a second time as I'm used to making teas now, which varies by type.  This tea would be different prepared in a conventional Western style, although in general that tends to just switch aspects balance around a little.  Vendors often recommend the style they think works best, or provide options, which is advice based on lots of relevant experience, but it could never fully account for individual preference differences.

The initial taste is really nice, sweet, with plenty of fruit (raisin, towards muscatel but not exactly like that, probably more I'll get to later).  It has a soft maltiness, nothing like an edgy Assam, but towards that, maybe better described as toasted pastry, similar but softer.  From there lots of description might fit, and that general range might extend a little towards cocoa; the tea is complex.  The flavors balance is definitely nice, without astringency to work around, and decent feel / structure.  It's no wonder people go on about this tea, especially given that it's just getting started. 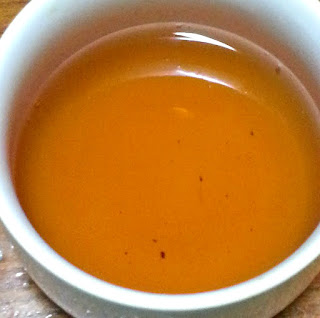 The next infusion is a nice coppery reddish brown, at normal infusion strength, maybe a touch lighter than some would like their black tea prepared.  Brewed a little stronger the astringency picks up, still limited to more of a feel or structure, still not edgy.  That strikes a nice balance with the sweetness and flavor complexity.  It's enough structure that the tea wouldn't work as well brewed at significantly higher infusion strengths, not like some of the softer Chinese black teas that have no limit related to that, so you can keep going with range of concentration depending on preference.  In the range where I would prefer this tea related to flavors balance the feel is also positive, complimenting the flavors and the rest of the experience.

There is just more of the same related to those flavors mentioned earlier, a nice intensity.  There isn't really one dominant flavor; a number of aspects integrate and balance.  Raisin and cocoa does underlie the rest, and there is some citrus, maybe across a range of very light muscatel and a bright citrus tone, more like zest spray from a Thai juice orange, bright but not as bright as navel orange zest tone.  A general richness more or less relates to toasted pastry in flavor.  An underlying mineral tone does remind me a little of the taste of copper, going all the way back to sucking pennies in my childhood.  I even found out from experience what happens when you accidentally swallow one; the doctor said it would probably work its way out, and I've not seen it on a routine health-check x-ray since so it must have.

Those are the basics, as I interpret the tea, but with the degree of complexity one could probably keep going.  It all really works.  It's not so far off what I expect better Assam than I've ever tasted to be like.  I've tried some decent versions but none that struck this balance, none with this fruit focus and approachable nature.  But I've definitely not tried enough better Assams that invoking a type comparison here--as I just did--makes any sense.  And it's been long enough that I'm tasting this against a different set of preferences and range of experience, with a good bit of transition in brewing preference over the last couple of years.

The next infusion is consistent, not varied.  I might mention that mineral tone does underlie the experience but it really provides the context for it, along with the feel and sweetness, in three different senses.

All this makes me wonder about the "fusion" part.  Is the character so appealing to me because I'm really attached to Chinese black tea styles, and they've moved towards that, likely by adjusting processing steps?  I'd look into it but I really do feel bored with my posts going on forever. 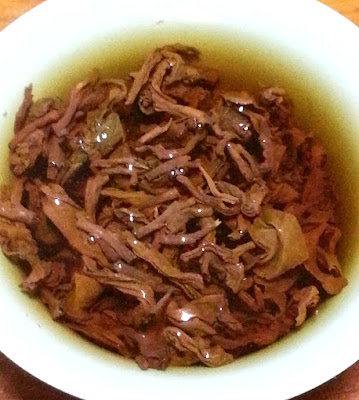 The next infusion (four, I think) improves a little, the best one yet; that's a nice surprise.  The fruit brightens a good bit, not that it was at all earthy or murky before.  The character has been clean and well balanced throughout, but all that range extends a little towards that bright fruit nature in Juicyfruit gum (not that far from Fruit Loops cereal of pandan leaf, since that product reference is a bit dated).  I think other fruit description may have been warranted before too, it just would have been a supporting aspect, and it's easier for me to list out main elements than to extend that to a long list as some reviewers can.  It reminds me a bit of persimmon, in addition to what I'd already mentioned, maybe spanning the range of fresh persimmon with the raisin effect touching on that of dried persimmon, but surely even that's not the end of it.

The feel of the tea had been interesting before but that steps up just a little too.  I'm not all that attached to feel in tea; a bit of fullness to support the complexity of the experience is enough for me.  But it's worth noting this one is doing something different, related to the way your tongue reacts to it, it feels full, causing some tightness at the rear and sides of the tongue.  It has more aftertaste going on than black teas often do too, a lingering sweetness.  I suppose it is more pronounced at the rear of the tongue but I don't mean that as a comparison to anything else, or as any sort of claim, as people tend to attach to something described in a similar way.  I like tea for the taste, mostly, and this one tastes good.

On to infusion five, this is where better Chinese black teas wouldn't be finished, prepared in this way, but the longer infusion times and natural transition cycle would change their nature, with different elements coming out.  More forward and brighter flavors tend to have dimmed and underlying earthy tones tend to come forward around this point.  A little of that does occur but there's still plenty of brightness to experience.  That coppery mineral tone picks up, and the toasted pastry aspect has changed, moving a bit towards what I think of as tropical hardwood tone.  I'm not actually tasting any tropical hardwoods but I do keep my clothes in a wardrobe--like closet, but a furniture version--that has an interesting scent, like cedar or redwood's laid-back but much more exotic cousin.

This tea should have a few more rounds to offer, it will just be tricky to get the infusion strength right without overdoing it on the mineral.  The astringency could overtake the character too, brewed incorrectly, but it hasn't been in the form of a biting edge, it's expressed as a moderate feel and structure.  This seems like a good place to leave off anyway, maybe extending past a short and simple description as it is.


The tea is nice!  I was concerned it might not fare well in relation to its reputation, since high expectations can make it harder to appreciate a good tea rather than easier, but the novelty and positive character lived up to the build up.  Part of that is about how well a tea style matches up with preferences and this one worked well for me.
Posted by John B at 2:27 AM