I'm comparison tasting another Farmerleaf Dian Hong, which they refer to as Black Matai, after the area name within Yunnan, along with a Thai Royal Project black tea I just ran across.  I'm not sure why I missed trying this Farmerleaf tea until now (a sample provided by the vendor), but it works out as a comparison reference for this Thai tea.

I've been routinely criticizing Thai teas as not on the same level as better Chinese or Taiwanese versions, a pattern I kind of expect to repeat with these, or it might just work out that the teas are different in style.  Typically that's a commentary about the Thai oolongs, so it's nice to at least be considering black tea versions instead.  Really mid-range teas aren't such an awful thing, better tea than a lot of casual tea drinkers are aware even exists.  But one tends to get spoiled drinking better versions, with the next quality level still not all that expensive or difficult to turn up.

In other posts I'd mentioned that it only works to comparison taste similar teas, most recently related to a tasting where they weren't that similar (both Taiwanese oolongs, in that case).  I'm not sure about the source plant type or style for this Thai tea; it really could be a local variation of Assamica or an imported variety Sinensis tea.  I don't expect it to be that close in style to a Dian Hong, although that would be good if it was. 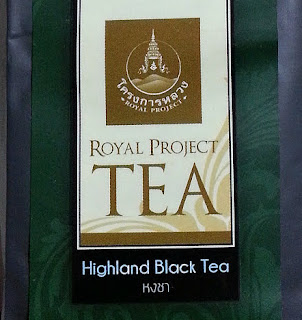 The Thai tea is quite dark, with twisted leaves, not necessarily whole but intact enough that the effect of largely unbroken leaves should come across (the astringency should be moderate).  The scent is a bit rich, if not strong, light malt with sweetness and a touch of cocoa.  The Farmerleaf tea is presented as long, twisted whole leaves, with some tips evident, with a really sweet and rich chocolate scent.


The first infusion of both was a little light, typically how I prepare black tea on the first steep, but strong enough to show where this will go.  The Thai tea is ok, a nice surprise.  The depth, aspect range, and balance aren't amazing but the tea is fine.  There is some sweetness and complexity, with a primary range that's woody.  The Dian Hong is intense, even light, pretty close to chocolate covered cherries.  The chocolate / cocoa is even in that sweet and rich range of cacoa nibs, towards dark chocolate.


On the second infusion the Thai tea works a little better stronger, still nice, it's just going to suffer in comparison with the other.  The flavor is a bit woody, with some complexity and good sweetness.  It might even taste a bit like chocolate and cherry, a good range for black tea, just far less so than the Yunnan version.  The flavors are clean and the overall effect is nice, it's just a little thin in body and flavors profile.  With no off tastes or notable astringency to work around ramping up infusion strength to offset that thinness is an option.

The Dian Hong is the opposite; lots of great flavor range stands out, and it has a fuller feel and notable extended aftertaste.  The chocolate and cherry is still pronounced, joined by more earthy range.  It's not so far from woody too but quite different, a darker wood tone, more towards bark or bark spices (not so much cinnamon, an unfamiliar range).  More mineral tones underlie that, with a clean, balanced, and unified profile.


I love tea in this style, which makes it hard to separate how positive the aspects are from that style preference. You never drink the best possible Dian Hong, since tea in general just doesn't work that way, and in a sense black teas tend to give up a little in sophistication that they gain for being approachable, but this one is good enough that anyone on that general page would love it.

More of the same on the next infusion;  the Thai tea is ok   Brewing it even stronger yet could add more flavor intensity, but it wouldn't work to add flavor complexity or more depth to other aspects just by ramping up infusion strength.

The Dian Hong has a lot more going on than just flavors range. It doesn't need to be brewed strong to express better complexity on different levels, so there's more flexibility related to making it however you like it.  On the lighter side works well, with the positive flavors still pronounced, still with good body and aftertaste, but it could be prepared fairly strong before that earthiness would blot those out.  Prepared lighter the sweetness and chocolate / cherry-fruit stands out, transitioning a little towards earthier range in later infusions, and brewed a little stronger the body fills out and gains structure, with a toasted character element and heavier tones picking up.  It would work well brewed Western style or Gongfu, with the latter allowing for more adjustment and variation.

Again I'm concluding the Thai tea isn't bad, and shows plenty of potential for future improvement with this character as a starting point, it just really isn't on the same level.  For an inexpensive tea it's better than I expected, not the best Thai black tea I've tried but ok.

More on the teas


It's my understanding that both of these teas are a great value.  The Farmerleaf tea is priced very fairly for the quality level, maybe still a reasonable deal if it wasn't quite as good, something they might adjust later once consumer brand awareness ramps up.  Or they could continue to sell on value, since costs are cut by removing at least one resale and distribution step.  The Thai tea I just picked up in a local Royal Project shop nearly for free.  It was on sale to buy two packs and get a third free (in the Future Park mall shop, in Northern Bangkok) so 150 grams was selling for 120 baht, around $4.  If I'd known it was really decent tea I'd have bought a pack at double that size for just under double the cost, but it's really enough of this tea as it is, I'd just give away more of it instead.

The Thai tea didn't cost more than I've paid for Thai CTC version, machine processed ground-up tea.  That's not something I tend to buy, but I do try lots of things.  This tea might work really well as a blending base, to mix with flower petals or whatever else, or I guess with other black teas, or even alone as a daily-drinking breakfast tea.  It's not "brisk," malty and astringent, which is typically a good thing, since you can drink it without milk and sugar, but I guess that depends on what someone expects or wants out of their tea.

I won't really know what the Thai tea is since the package writing is in Thai, and next to nothing turns up about it through Google search.  In a Thai language search more probably would, and it is possible to use Google Translate to search for terms you really can't read, and then translate back page results, but it's too much work.


There's more on the Farmerleaf tea on that page, with some basics as follows:


Above 50-year-old natural tea gardens, 1 bud/3 leaves from Matai Xiang, Lincang county.  Picked from early March to late April 2016... The tea gardens of Mrs. Pu are located at a high altitude (1400m to 1600m)...  the density of plantation is low, which allows the tea trees to grow a large root network and reduces the need for fertilization.


That write-up mentions that the toasted aroma of the tea relates to a processing step, to the temperature the tea is exposed to during the drying step.  The final outcome worked well for me, producing a complex and pleasant black tea.