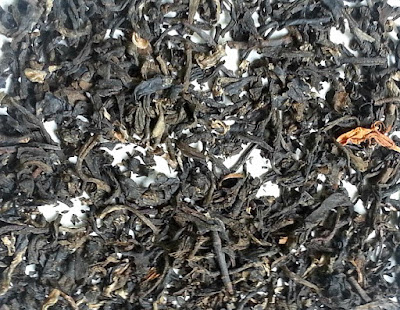 I first tried jasmine black tea in Indonesia, a common commercial tea alternative there (with a little about one version here).  I was surprised by how much I liked it.  Among other flavored teas I'll drink Earl Grey and that's about it (although I did like a coconut flavored version of black tea; I guess there's room for exceptions).  This version should be much better than that grocery store tea in Indonesia, given the quality of other Hatvala teas I've tried in the past (including this Earl Grey).

I'll say a little about Hatvala first (general site link, or where they sell this tea), but I've introduced them before in other reviews (like this one, about an oolong and black tea).  They seek out and sell interesting, better versions of Vietnamese tea.  On a trip to Hanoi and out in the country I found some interesting teas but did a little better through Hatvala (by mail) after hearing about them online.  As "Western" vendors go What-Cha carries their teas (link to one of my favorites, a Red Buffalo roasted oolong).  Hatvala also sells teas directly, but using that Western source might be a good way to try a couple.


You can go to Vietnam and all but miss that they drink anything but green tea, with most coming from the Thai Nguyen region (per my understanding; I'm no authority on Vietnamese teas).  Decent black tea is around, and oolong also isn't incredibly rare, but you might miss it.  As with anywhere turning up better quality versions is also an issue.  Their ordinary versions of green tea are fine, a bit heavy on mineral aspects, but prepared properly they can balance nicely.


It's odd that in Vietnam they tend to drink green tea prepared with boiling point water, served in a pot so that brewing time isn't controlled.  They seem to like the high level of astringency that results from both of those brewing choices.  Other better Vietnamese teas are a completely different thing, but I'll get back to this flavored version.


On first taste this already seemed like one of the best flavored teas I've ever tried.  It's floral, of course, but maybe almost as fruity.  At any rate there's a lot of complexity in flavors experience, even if I am completely wrong about that fruit part.


One of the main flavors would have to be jasmine, wouldn't it?  It comes across completely differently than in green tea, which is why those inexpensive, commercial jasmine black teas in Indonesia worked so well for me.  Jasmine green tea can be nice, in a sense (with everything depending on preference), for that sweet floral nature being so intense.  I find that intensity to even be independent of flavor level that's present, to some degree, as just how the aspect characters mix, merging with the fresh, brighter flavors in green tea.  But it is easy for the flavors intensity to become a bit much in green versions.  Combining it with black tea strikes a completely different balance. 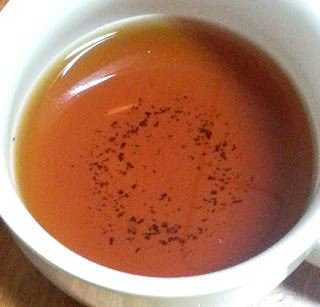 To some extent this does just taste like black tea mixed with that particular flower, but the sum is also somehow greater than the parts, so description will be a challenge.  It comes across as more complex than that.  Getting the level of jasmine right would be a critical factor, and this really works for jasmine being moderate.  It combines naturally with the black tea flavors, not seeming to override them, not as sweet and powerful as can be typical is in green tea versions (although of course those would vary in style).  The Hatvala owner said a little about what the tea is and how it's made as follows:


For the black jasmine tea we are currently using a wild black tea produced in a small factory in Fin Ho, Ha Giang province.  All of the jasmine teas are scented in the West Lake area of Hanoi using locally, naturally grown jasmine blossoms.  Blending is done by an old lady (she is approaching 80 years old) and her family.  They have been blending jasmine and lotus teas in this area for many years.  The jasmine season in the north of Vietnam is May to September and it has a stronger fragrance than the year round jasmine available in the south,

Blending is by layering freshly picked jasmine blossoms during the afternoon, layering it with the tea and leaving overnight as the blossoms open.  For the black tea this is repeated a total of four times (normally three for green tea).  Rule of thumb estimate is that by the end of the process approximately 2 kg of jasmine flowers are used for each kg of tea.

Lets try more flavors-list separation on the second infusion.  I'm brewing this tea Gongfu style even though it's not the most natural choice, it's just what I'm used to these days.  It's really a variation of those two main approaches, with the proportion a bit light and times drawn out a little as Gongfu brewing goes, so as much in between.  I had used Western style adjusted towards Gongfu style a lot in the past and I suppose I've ended up not far from that, just using the other equipment, a gaiwan in this case.  These aren't supposed to be objectively better versions of technique I'm describing, not necessarily a progressive learning curve, just the page I'm on.  This tea would be fine brewed Western style, and it worked out similarly using that approach the second time I tried it.


The tea balances being earthy and sweet very well.  The flavor is not subdued but well-matched.  I could swear I'm picking up fruit, beyond the floral tone and earthiness of a black tea, surely from the tea.  It's not easy to identify.  It's not so far from roasted sweet potato but not exactly that, a little towards dark cherry but maybe not exactly that either.  The easier description is to just include them all as a list, to say the tea tastes like earthiness from black tea, a soft version of malt--it's not astringent, a typical pairing of one flavor range of malt and one feel element--and maybe including dark wood tones, then also jasmine, just a softer and balanced version of that, roasted sweet potato, and dark cherry.


Part of the sweetness and complexity also reminds me a little of a bark or root spice, not one I'm familiar with.  This is back to that idea that when you walk through a traditional spice market lots of unfamiliar smells mix, many sweet, earthy and complex in ways you could hardly imagine.  It doesn't come up for me so often but it's the kind of experience that leaves a lasting impression on you.  Old style markets here tend to smell like fish sitting out on ice on an open table, and for good reason.  To put a name to that spice aspect it's along the lines of sassafras.

The tea is perhaps fading a little on the third infusion, or since I'm not paying close attention to times it could just be that.  I think either way it will probably go a couple more good infusions by stepping up times more.  I'm probably drinking this on the light side related to how lots of people might take black tea, but then I'd expect that to work as a generality about preference shifts, that people might tend to prefer tea brewed lighter across all types after gaining more exposure.  That's just me speculating, of course.  At any rate the balance is still great.  To me this works really well brewed lightly because it still has a nice feel to it, not as full and rich as some other types, but it's definitely not thin, and the flavors work well.

I'm going to try and explain the part that can't be explained; good luck to me in pulling that off.  There was synergy between the jasmine flavor and black tea even in the much lower quality Indonesian commercial versions.  They weren't doing so bad with balance but they weren't on this level for success in that.  This is a bit of an aside but a friend living there said he experienced health issues related to drinking a lot of that tea, which may well have been processed with a chemical that didn't agree with him.  Due to talking with the Hatvala owner I am completely convinced this tea is natural, untouched by chemicals, and probably sourced to be relatively safely grown.  But that's my personal belief; guarantees about that sort of thing are difficult to assess, and here in Thailand that eve relates to accepting organic certifications.


In good Earl Grey the orange flavor (bergamot essence) and black tea combine well; the flavors compliment each other.  Per my current preference this works better.  Novelty might be part of that.  If you'd only ever tried so-so tea-bag versions of Earl Grey and then ran across a much better example it could seem like a different experience, and I think I'm there now with this tea.  Bergamot is a natural companion to black tea, with sweetness and complexity combining into one profile range with it, and depending on preference this is just as good or better.  With Earl Grey it seems the two fit more naturally into a black tea/base bergamot/high tone pairing, and does something similar, but with jasmine on the lighter side those black tea flavors just blend with floral.

A bit of an aside:  the smell of actual jasmine flowers can be on the intense side.  People use jasmine to make a garland here in Thailand, like a small version of a lei.  Basic versions are inexpensive, costing 10 baht (35 cents, give or take), and the larger version in the photo cost about a dollar instead.  They're even sold by people walking around at traffic stop lights.  The garlands are used for religious purposes, as a symbolic offering to a Buddha statue, or just as an air freshener.  If you put one of those in a bus it can add a nice background scent but in a taxi it's way too strong.


Around the sixth infusion this thins a lot.  The balance is still ok, with the jasmine fading at the same rate as the tea.  For a light oolong this would brew more times but it held up well for what it is.  It's a sign of good quality if the character stays positive throughout the cycle and this tea did.

General impression:  I loved the tea.  It's not as sophisticated and aspect-layered as some other versions of plain black teas, lacking some structure and complexity compared to better Dian Hong.  But that's splitting hairs, comparing it to some of the best black teas made.  Even for being more straightforward on those levels to me this might have eclipsed Earl Grey in expressing the highest potential of flavored black tea.
Posted by John B at 12:31 AM