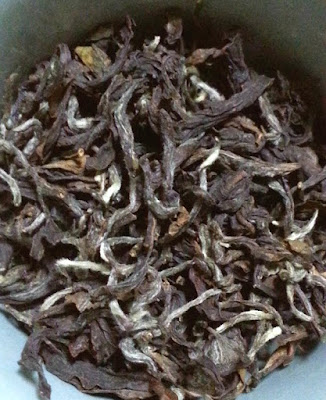 I've reviewed different versions of Gopaldhara's Wonder Gold before, so I have a good idea what to expect.  But this will be a good way to re-adjust to that type, since I've been all over the map lately, and I might as well take some notes.  One other version they sent, Enigma, has a really cool look to it, so I'll do more with background review when I get around to trying that, or maybe add that to writing about a green tea version.  All those samples were provided for the purpose of review, by the way, many thanks to them for that.


If the tea is as I remember others it will be bright and sweet, with good fullness and richness, and flavors that are both floral and fruity, just a bit hard to separate due to complexity.  There usually was a smoothness and sort of "roundness" to the overall effect, something unique.


Just a few words on that re-calibration idea first, re-adjusting to a type.  I recently tried some Dan Cong, shared by an online friend visiting, and it was interesting experiencing re-adjusting to a tea type I've not been drinking much of for awhile, since the end of last year (not that long).  Lately I've been drinking more black teas, pu'er (young sheng, mostly, but also aged sheng and shou), white teas, including compressed white teas, Longjing, Darjeeling, Wuyi Yancha (always, really), Taiwanese oolong, and earlier this year teas from Nepal.  The taste and other aspects of those Dan Cong were still familiar, to a limited extent, but blind tasting to determine type and characteristics didn't go so well.  I'd probably review them on a different level of detail if I'd been drinking more of them recently.

I've not exactly been off Darjeeling for awhile (I reviewed another first flush version from Gopaldhara a month ago) but I've really been on lots of different pages in that month.  Who knows, maybe that will help me see this tea differently, to notice something else about them.  The Tea Obsession blog mentioned the idea of exploring tea horizontally or vertically in a recent post, not exactly just related to jumping around between types or focusing on one, although that's basically it.  I can copy the whole post here since it's short:


Tea horizon is broad, visible, reachable.  Vertical tea is how deep one can reach. My perception of exploring tea horizontally can be number of types, regions, varietals, processing, basically as many different teas as one can.  Vertically can be substance within the leaves which is the essential to the quality, grades, climate influence, age, cultivation practice influence, one way to vertical vertical depth is try everything in a region or even one tea of many versions.


Nice, a bit philosophical.  Since she specializes in one tea type (Dan Cong) she would have a natural bias towards exploring one type, but biases aside there is something to all that.

I will never know Darjeeling as well if I just try a couple dozen samples a year (or more, but still in that general range), and only pick up random bits about tea plant types, the differences between flushes, input related to micro-climate, and processing differences there.  The same is true of Dan Cong, or Wuyi Yancha, and probably even more true of pu'er.  Touching on those underlying issues and factors in hit-and-miss fashion wouldn't be the same as digging in and specializing on one narrow type.  But for now that's what I'm doing, staying scattered.


This tea is all that I expected, quite nice.  It's probably mostly floral but to me also fruity.  The richness of that range is part of what makes it so exceptional.  Breaking it down to a list of aspects is almost a flawed approach, since it doesn't come across that way at all, covering a complex range of flavors but with those integrated integrated, nothing like a half dozen aspects mixed together.  A general impression of brightness and freshness comes across well, not something that's easy to define. 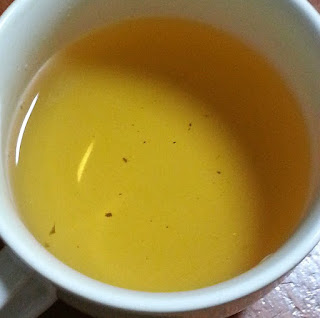 The oxidation level seems perfect for this.  This tea would work well on the "greener" side, picking up a little more brightness and vegetal tone, or on the more oxidized side, drifting to more earthy, deeper tone complexity.  But this level is just right, still quite bright but optimal for complexity.  It is absolutely right in between black tea and green tea in nature, drawing on range from both.  Of course it's nothing like oolong, except feeling a bit full is common with lots of those, but it's different in that regard too.


It's problematic but I'll say a little more about that flavors list approach.  The floral tone is sweet but not really bright and sweet like jasmine, a bit milder, more like a daisy, or how I'd imagine a sunflower to smell.  It's not as subdued and earthy as chrysanthemom but in between that and the brightest, sweetest flowers.  I've been smelling plumeria lately, which are very bright, sweet, and fragrant, and it's not exactly that but in a comparable range.


The fruit part is also hard to specify.  That brightness and sweetness reminds me a little of yellow watermelon.  It's not a perfect match but not far off that.  With the range seeming more floral than fruity (but balanced between the two) it's harder to isolate, but it's sort of like juicyfruit gum too, that type of tone.


What mineral is contributing is harder to separate out, but it's important to the overall effect.  It's not mineral intensive like a Taiwanese high mountain oolong but that range is playing a supporting role, helping give it that balance.  Actually tasting it and saying it's like one particular rock doesn't work; it's in the background, something you can sense but not identify.  Or there's always the possibility I make aspects up, that imagination plays a real positive role in identifying impressions that are subtle and hard to define but then it oversteps it's proper bounds.

My take is that the mineral plays a similar role as salt in sweet foods; you can't really taste it clearly but without it things wouldn't work.  It couldn't actually be salt but it's not so far off that in effect, just a different mineral, something lighter.  Of course the character of the tea is primarily sweet and bright, with richness and balance filling in beyond that.

There is no astringency at all, and not even a full feel one would call "stucture," but the tea is a bit rich, certainly not thin in any sense.

I went a little longer on the fourth infusion and the tea changes character quite a bit.  It was going to have transitioned to earthier range anyway, most likely, and a slightly longer steep accentuated that.  It seems more like a black tea, although still right in the middle.  The floral tones become even more intense for brewing it a little stronger.  The feel thickens, and that other range gives it more intense complexity, but really the tea works well both ways.

As for flavors they're not so different than in the earlier, lighter brewed infusions, the general effect just shifts.  That mineral tone is interesting, moving towards a woody range, but not really getting there. Now it does taste a little more like rocks, a bit like that earthy, warm tone in slickrock, sandstone that's prevalent in the Utah desert.  It makes for a nice overall effect.  It gives up a little in brightness for balance but it is still sweet and bright, just less so. 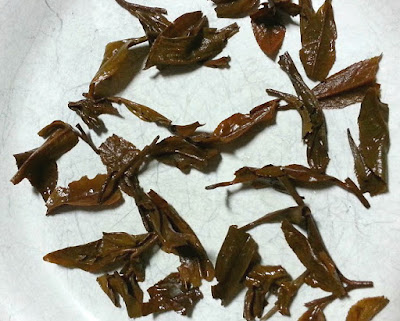 I like the tea.  I kind expected that, and even anticipated the general character range, but it's still always a nice experience trying exceptional teas.  It's not exactly as I remember others like it.  This version strikes a really unique balance in character, with a subdued oxidation level bringing out complexity nicely without sacrificing any freshness and brightness.