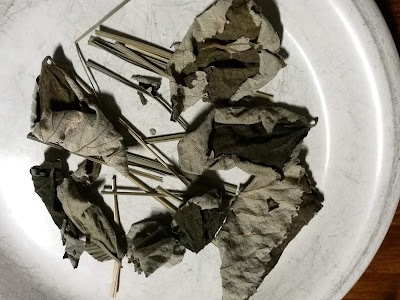 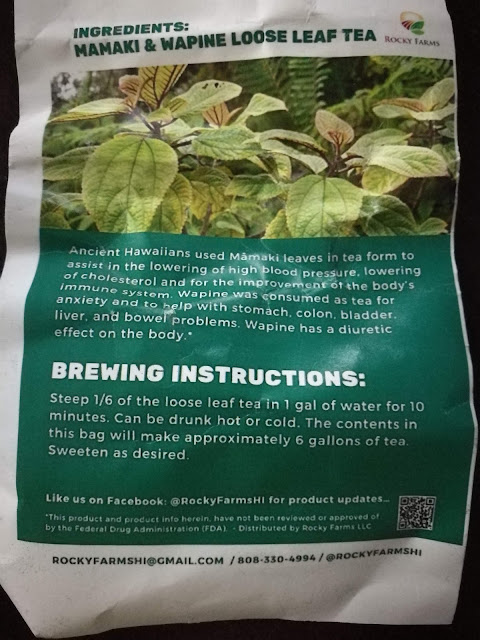 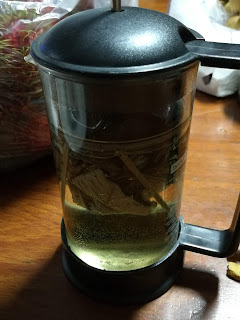 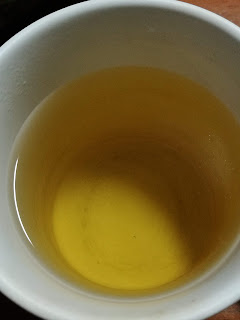 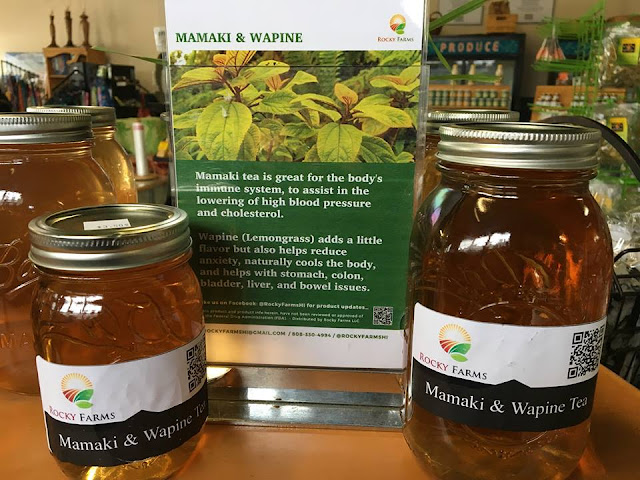 A family friend (or extended adopted family, really) sent me some tisanes from Hawaii awhile back ("herb teas," to some, or some others don't like to share that word).  They're from the Rocky Farms HI producer.  One I had tried, when I was sick, since that makes for a nice time to drink a tisane / herb tea.  I'll take this in an unusual order, and cover what I thought of it in a review, then get back to what it is.


With a tisane it can be described as tasting exactly like the ingredients, those herbs, but I'll compare it to others.  I could probably just quote Wikipedia articles about these herbs and it would do as well.

One part tastes a little like licorice, another not completely removed from mint.  It's probably closest overall to lemongrass.  Maybe I should check what it is again; it could just be that (yep; the part that looks like lemongrass and tastes like lemongrass is actually that--solid reviewing skills).

The flavor is nice, reasonably complex and balanced, but tisanes tend to give up complexity to real tea.  It's smooth in feel, decently full, but the overall flavor range is narrow, and tisanes tend not to transition, to change during brewing.  It's not that far off a version of basil.  That would be in between the Thai basil, which is close to mint, and the western sweet basil, but probably not quite as sweet as either, with the lemongrass supplying that part.  That's about all I'm getting.

This is as much about health benefits as flavor, it seems.  I can investigate those but a conclusion won't emerge, just some ideas about potential positive effects.


Normally I don't do much with this subject, or I'd always be going on about traditional claims made related to "real tea."  But somehow it makes sense to me to mention this part for a tisane.  Or maybe it really doesn't, but I'll look up some hearsay anyway.


From the Maui Medicinal Herbs site:

Mamaki is a native Hawaiian nettle species known as an ancient miracle herb. Mamaki tea is best known for its refreshing, smooth taste and medicinal uses. It is known to act as an antioxidant that promotes healthy cardiovascular functions, lowers stress and fatigue levels and acts as a mild laxative. It is also commonly used to reduce allergy symptoms and promote liver Health.

That overlaps a lot with the other description from the producer of the version I tried, Rocky Farms HI.  Two people saying it doesn't make it true but it sounds good.  I'm not sure what to make of the set of claims overlapping a lot but not matching perfectly.


It was possible to turn up a better source with more information, both a lot of botanical background on the plant (what it is in terms of category, where it can grow, etc.), and also a more neutral source of hearsay for health benefits, from a University of Hawaii based source:

Dried or fresh māmaki leaves are used to make a mild but invigorating and healthy tea and one of few commercially available native herbs for consumption. The tea helps with listlessness. Māmaki leaves generally have a more pleasant aroma and taste than koʻokoʻolau. [2] The fresh or dried leaves for mamaki tea have been used to help with many internal disorders such as for the stomach, colon, bladder, liver, and bowels. [3]

Fruit is eaten as a laxative or for stomach, colon and digestive problems. [9]

Infused leaves can be used in treatment for high blood pressure, high cholesterol, liver problems, depression, bladder problems, bladder infections, and PMS. However, with some people māmaki can cause mild agitation or insomnia. [9]

Practioner David Bruce Leonard adds: "A remarkable friend, māmaki has a soothing effect on the nervous system in a similar way to jasmine tea. It works well for iritability or just to decompress after a day in Babylon." [9]

Mind you that's not an officially sanctioned university study source making those claims, it's a UH related information page citing another local reference source (two of them; those citation numbers).  It's conventional wisdom, like those Chinese traditional health claims, about oolong helping with weight loss and whatever else.

At least it's probably as well-grounded as WebMD.  Oddly in looking for a reference to the health benefits of Lemongrass I turned up this hearsay account of "real tea" health benefits from WebMD, just after typing that.  Let's hope that some of that is accurate.


I was really looking for their input on what health benefits lemongrass supposedly provides, from WebMD, about what it helps resolve:

More evidence is needed to rate the effectiveness of lemongrass for these uses.

That's a lot.  From when I drank a lot of tisanes one site passed on their standard account of what herbs or other infusions were supposedly good for, from Alvita:


Native to India and tropical Asia, lemongrass (Cymbopogon citratus ) has a wonderfully sweet, lemony aroma and zesty flavor that has made this herb a staple in Asian cuisine. Herbalists have also traditionally used tea brewed from lemongrass to soothe the digestive tract.*


Odd that a medical themed site that's ok with passing on hearsay lists out 15 benefits and a site actually selling the product lists only one, in this case.  It's definitely tasty; there's that.


I'm not endorsing any of these claims, just looking them up and passing them on.  The tisane was pleasant to drink, and I wouldn't fault someone for hoping the herbs do pass on those benefits, or taking the next step and accepting that they do.  Drinking that over soda has to be a huge trade up in health impact, and I wouldn't be surprised if this herb infusion does pass on more health benefits than plain water.  It's just hard to guess out which parts are more accurate than the others.