Assam Teehaus orthodox Assam, and about a Bangkok tasting


It's been over a year since I met Maddhurjya Gogoi and Bulu Deka along with Sasha Abramovich in the Bangkok Chinatown.  The time just flies.  I met with Sasha again for a trial run at making tea in the park for an event next weekend and he passed on more tea from Maddhurjya (from Assam Teahaus).  I'll say more about that tasting event at the end.

I talked to Maddhurjya not so long ago, about how things go with him, and it was the usual mix of ups and downs, about new directions and positive steps taken, including processing step and equipment improvements, along with set-backs and typical problems, like local power supplies being a bit unstable.  In an earlier review of one of their teas I covered more of his earlier story, and I'll have to get back to passing on an update about those other later steps.  The main running themes are about small Assam farmers trying to produce better orthodox tea and to sell more directly, to get away from the wholesale middlemen and tea wholesale market models, which are very interesting subjects to me.

It'll be nice to get back to trying good Assam.  Sasha actually passed on three versions, one that looks and smells a little like Jin Jun Mei.  Before you start, of course it's not supposed to be Jin Jun Mei, and if you like we could start with a premise that I've never actually tried a "real" version, even though it's my impression that I have.

The one other sample I'm not trying yet may well be this year's version, and I may still be on last year's version for this session (I think this probably is a 2017 tea).  Either way I have two others to try, and I can sort that out more in the next post.  Black tea that's well sealed won't lose much over the course of the first year, as a green tea definitely would, so it may have faded slightly (if that's the case), or depending on how it was produced it may have improved slightly (the sun-dried tea case).

It'll be nice to try a tea brewed Western style for a review.  I'm just getting over a cold (which goes well; I've been resting a lot this weekend) and this tea type is perfect for that.  That note and context was from tasting last weekend, when I wrote this post's notes; I'm ok now, towards the end of the week. I might miss a subtle flavor or two but I'm not working with a significantly diminished palate since I'm almost over that already, and never was actually congested.  My immune system and I have reached an understanding:  my body lets me know I'm getting sick early on, and if I give it the rest and extra fluids right away that resolves it, and otherwise things go the hard way, and half the time I end up with a secondary infection too.  Onto that tasting. 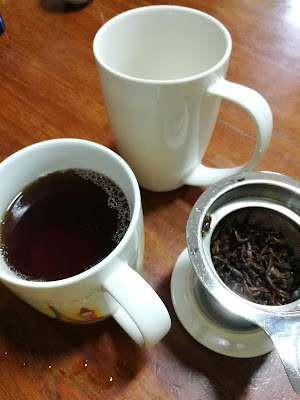 I think this version improved over the last that I tried, although it is hard comparing a tea against another version from just over a year ago.  I was trying the 2016 version last year, which was nice, but they were still working out optimizing production steps.  Whatever I try today might be surpassed by the next version I already have on hand too.


It has good sweetness, good flavor complexity, nice aspect range for flavor, and it's very clean in effect, no woodiness or trace of anything odd at all.  The flavors are so complex and sweet they lean a little towards fruit, but it doesn't seem like a fruity tea.  There is some malt but it's very tame compared to most of what is produced as Assam black tea, a soft but full feeling tea.


Some people would miss that citrus / pine needle / malt kick that was present in the Halmari versions I tried a long time back but this does well for working more in a Chinese black tea style, softer and less intense.  I'm using water just a bit off boiling to brew this and ramping that up to right at that level would draw out more of an edge, if that were desired.


After all that I've still not really mentioned a flavor yet.  The main range seems to be cocoa, with a bit of malt in between the typical edgy malt of Assams and the softer, mild and sweet malt in a malted milk ball or milkshake, or Ovaltine.  The trace of fruitiness hints a little towards fig but doesn't quite get to that.  The depth in terms of flavor and the rest doesn't come across as a list of flavors.  It's not complex in that sense, not intense in flavor, just positive in character, not thin, and pleasant for what it does express.  I went light on this first infusion though, a habit carried over from how I prepare tea using a Gongfu approach, so it may develop a bit in the next round. 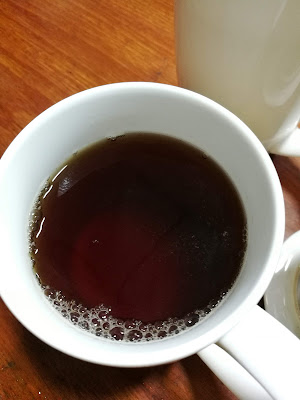 Pre-warming the infusion cup to bump up brewing temperature this time did seem to shift the aspect range a little, drawing out that more caramel or toffee range sweetness that using hotter water results in.  The dryness and feel picked up just a little too; it's better this round.  It's still towards mild malt and cocoa for main aspects, with some degree of mineral and mild fruit underlying that, not a pronounced or distinct enough aspect to identify as one thing.  Along with that flavor range and feel shifting a little the aftertaste picks up too, the way the tea gains some fullness by leaving your palate a little slower.


There is still a little room for this tea to improve related to adding a little more complexity and a bit more for specific flavors to stand out but it's pretty good as it is.  Most people who think they like Assam probably don't know it can be like this, even though this is just a well above average version, not quite as good as they get.  It works well as a tea to drink with breakfast, tying back to a comment I just made in another post about how most shou pu'er comes across; as pleasant, complex, and enjoyable, good enough to appreciate with food or without but not so complex and refined that you need to just focus on it to really appreciate it.

It's nice to relax about brewing parameters a little, and not just focus on tea for an hour, and handy to have good tea that doesn't require that level of attention for with breaks or breakfast.  I won't brew a lot of the teas I normally drink at work because I won't go through all the Gongfu brewing steps there, both because it looks like a lot of messing around and to an extent it is a lot of messing around.  I will drink tea that needs some focus with a half-hour breakfast, going through a fast 7 or 8 infusions using a clay pot or large gaiwan, because it has become that automatic.

I think the other two versions are the better ones; one made with finer buds, and one the latest version, the 2018 batch.  It was nice doing a simpler version of a review today, and I'll try to keep those reviews simple too, even if there ends up being more to say.  I actually did try one of them, so I know how that's going to go, to some extent, and that tea was closer to what I've tried of other very good Assam versions, a little heavier on bud content, a bit drier, and maltier, and more intense.  One part of the taste is a bit towards pine needle, a little resinous, which is nice.  But I'll get back to that; I didn't make any notes on it yet. 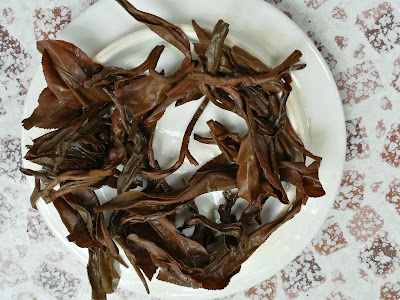 Trying tea in the park


There should be a rare tea-event description post for next week too (related to this event on the 21st), since that meeting with Sasha was to try out brewing in the park (Benjasiri, the one beside the Emporium mall in Bangkok, near the Phrom Pong BTS station).  I can say a little about how the trial went.


Hot water was the main concern, and of course they don't have outlets around for people to plug a kettle into.  It is possible to buy a tumbler or thermos refill at the one vendor station by the door near the BTS exit.  At best that's filtered tap water, and it may not even be filtered, which is safe--to drink local tap water boiled--but not ideal, especially for tea.  For space there's a lot, just not in case it rains, and the temperature was fine for drinking hot tea yesterday, just getting a bit warm around 1.

Sasha brought his wife, Nok, and we ran into an interesting local guy, Joseph.  He's originally from Ireland, and we ended up talking through some interesting ideas about spirituality and how it overlaps with normal life experience with him.  I've sort of left off the theme of being a religious seeker but that is still familiar ground, interesting to get back to.  We tried some of that Thai Moonlight White tea from Lampang, and some sheng and shou that Moychay sent, which made for plenty of interesting ground to cover.  As far as what to taste with a larger group next weekend (maybe larger; I don't know how many will show up) sheng may drop out, since it's trickier to brew and harder to appreciate without acclimating to that aspect range first.  We might try shou mei white instead.  This being Thailand I was thinking of trying a Thai black tea from Tea Side too, with those more or less made in a Yunnan Dian Hong style.  We'll see.


Beyond the water issue and seeing how brewing in the park went it was interesting seeing what could be different.  I forgot a tray, which would help, and small towels might work well along with paper towels.  It was interesting to see how preparing tea with a gaiwan wasn't necessarily easy for me, due to the mechanics of holding the cup changing when sitting on the ground versus at a table.  I spilled more than usual, even though I prepare tea in a gaiwan almost every other day.  I'll need help; that I already knew, but the limit of what I could do for preparation and how the water heating issue work out made all that clearer.

Two people volunteered to help already, that one Lampang Tea vendor, Noppadol, and a random contact responding to that notice.  It should be interesting.  I plan to shift the format based on how many people are there.  I'll do more pouring tea myself with emphasis on Gongfu approach if it's smaller, and more managing others helping out with Western style brewing if more turn up.  Of course I'll mention how it went here.