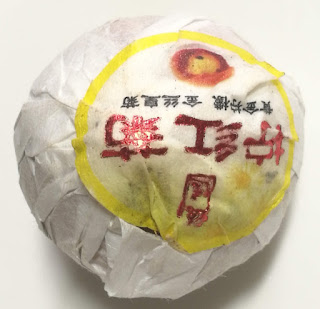 When visiting Jip Eu in the Bangkok Chinatown with Huyen Dinh a few weeks ago the owner passed on a few extra samples (always so nice of them to do that).  I reviewed the Longjing I bought, and some Shui Xian they gave me, but there are two more others.  One is an orange peel stuffed with tea, which I'm reviewing here.  Those seem about as popular now as they ever were, or maybe they peaked last year.  I thought those were usually made with shou pu'er but I'm not sure about that.


This is something different, a real mystery tea.  I didn't even remember which kind of tea this is prior to tasting, although it did turn out to be black tea, as it seemed.


The look is cool; it's a dried orange peel, stuffed with tea, with some of a flower sticking out at the top (chrysanthemum, it seems).  The first infusion was just wetting the peel, after a rinse.  It tasted like dried orange peel.  I started digging some tea out after that first infusion or else I'd be brewing this all day to just get the tea wet.  A second infusion still tastes a lot more like dried orange peel than tea.  It's actually nice though; including a good bit of dried orange peel in a tisane blend might work.  I've used a fruit peeler to only strip off the outside thin layer for blends in the past since it's easy to dry and contains a lot of the citrusy, volatile aspects and not the bitterness of the white part but so far this is fine, just like orange. 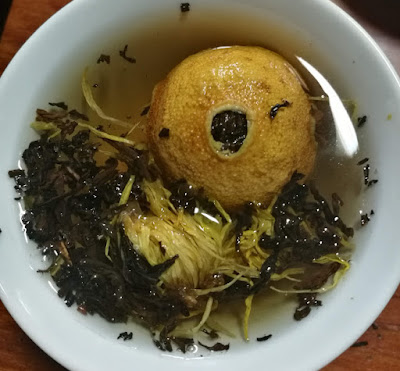 Around the third infusion I'm starting to taste tea.  This might just be black tea [I'll leave that guesswork in the review format after editing]; the flavor profile and look seems wrong for shou.  I somehow thought it might be oolong--not that I have much memory to work with at all, based on what someone told me a month ago--but that just doesn't seem possible based on the look and taste.  Between the citrus (orange peel) giving it a high end and a flower adding some smoothness and depth just that black tea earthiness and edge comes across.  Or something oddly like that, if contributed by another tea type.

It's interesting the way those flavors layer together on the fourth infusion.  They're not as unified as they might be once this brews a couple of more rounds but it makes for an interesting tea blend.  The individual contribution of the tea itself doesn't stand out much, given how pronounced the citrus is, and how drinking three things at once works out.  I'm so used to single-type teas this is unfamiliar ground.  That tea has a depth I wouldn't necessarily expect from a black tea, a mild earthy oiliness, not unlike the trace of tar that can come across in shou.  But it can't be shou, since it doesn't look like it, and that edgy malt isn't common to shou.  Funny being four rounds into a tea and not knowing what it is.  It really has to be black tea though. 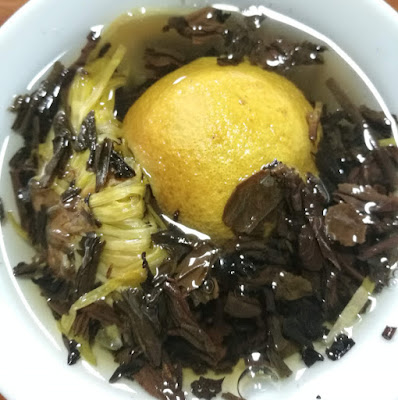 A half dozen infusions in I tore the orange peel partly in half to expose the last of this tea.  This will probably brew for another dozen infusions at least, it seems.  It was too much for a large gaiwan but I couldn't bring myself to pass on the messing around and put it in an infuser or teapot instead.  If snapping it in half was easier this would work well for brewing tea grandpa style.  Leaving it whole like that you could probably brew tea with it more than a dozen times made that way, just lots of light infusions, over the course of a day.  You could be the first person in history to "brew out" a dried orange peel.

I kind of like it.  I've made it a point to stay open to blends, and I've drank a good bit of the Earl Grey and floral Ceylon blend I brought back for the staff at the office from Russia.  I never reviewed those here, due to a plain tea bias I guess, but they've been ok.  It can be nice drinking a tea that you don't feel any impulse to pay much attention to or get right for brewing parameters. 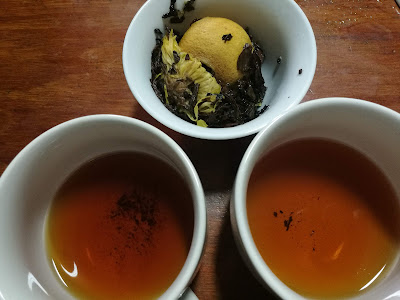 This tea isn't transitioning that much.  The "tea" part blends into the rest; other than seeming vaguely like black tea but a bit thick, oily, and earthy for being that it seems nice.  I don't feel compelled to try to expand description out into a flavors list beyond that.  It tastes like black tea, and there's orange citrus, and that flower gets buried a bit, just filling in and giving it depth.

"Stacking" the infusions seems an obvious thing to do, mixing subsequent rounds together.  In part that's to mix a cooler and hotter cup, to drink it in the middle, and to allow for keeping up a brewing pace.  In another context it's about combining the two thin "time-slices" of brewing aspects into one more even layer.  I guess that sort of works too, but in this case more about evening out the sloppy brewing time than getting two time-slices worth of transition into one cup versus one.

This tea itself is two distinct colors; surely it's not a mix of types?  It looks like they've combined black teas that came out differently, one lighter and one that could pass for something else.  Oolongs look a lot like that one version too, dark but oxidized less.  Could this really be oolong?  I suppose I could be interpreting edginess and malt as what's really coming from an orange peel.  It seems unlikely though.  This orange peel really does bury the flavor of the tea, to some extent.  I think I might like this better with shou since at least that blast of earthiness would stand out more, or fill in as a deeper underlying layer that expressed itself.  This works though, but the tea blends in under those other layers, or I guess between them.  I'd probably appreciate that more if I had tried a version where it didn't that didn't work well; this just integrates.

I could tell going in this would be way too much tea to brew at one go.  It fits in a large gaiwan but it's going to brew two liters of tea, two ounces at a time (or two quarts, 60-80 ml at a time, in the other set of units).


I brewed around a dozen infusions, all nice enough, or maybe more.  It came across a bit like an Earl Grey, to be honest.  I guess that's a good thing for me; I like Earl Grey.  It was interesting that it wasn't exactly like an Earl Grey.  It wasn't bergamot orange theme flavor and for being a good bit of peel instead of an essential oil it came across much differently, just not different in a way I really had success in describing.  I wouldn't base my tea habit on drinking this very regularly but mixing in some or trying it a few times to vary the experience would be nice.  I'd think shou might work even better.  I guess the down-side is that no one is going to stuff above average shou into an orange peel so the tea itself would always be on the average side at best, and mediocre shou can get a bit rough.


It kind of goes without saying but it's easy enough to experiment with making something like this, without actually buying it.  Fresh orange peel wouldn't work at all, I don't think; it wouldn't absorb the water and wouldn't contribute flavor as a result.


Just drying an orange peel in a toaster oven would probably work, probably for 45 minutes at low heat, but still at around 120 C / 250 F, not that low.  Peeling off the outer layer of the skin, as I'd mentioned, is another approach, one that retains the positive flavor but that's much easier to dry.


It would work with lemon or grapefruit too, but I'm not so sure about lemon tea, maybe better for making an iced version.  Mandarin orange peel would be nice, and they do sell those all over here (which they refer to as Chinese oranges), but I don't remember seeing those back in the States.  Now that I think of it maybe this was a Mandarin or Chinese orange; that would explain how it could be so small.  The taste of both is similar but different enough they're easy to tell apart but fruit peel is something else; I didn't notice what kind of orange this was from.  I've used mandarin orange peel for blending awhile back (the last picture) but it's not the kind of thing I could keep a mental database of flavors for.

Of course just buying them from a Chinatown shop, like Jip Eu here, also works.  I didn't check on how much they sell this version for but it shouldn't be too much, and it was interesting to try.  One nice part about visiting Jip Eu is walking around Chinatown, with lots of cool shops all over the place, and a wholesale vending area on the other side, below the main street (Yaowarat).  Jip Eu might have had other versions and another shop very nearby had a couple related types (shown in a photo here).