I'm comparison tasting an ancient tree Vietnamese green tea with a Thai version of sheng pu'er from Lampang Tea (only similar to pu'er, really, since that's used as a Yunnan region-specific designation).  This green tea is another that Huyen Dinh passed on in that visit a month or so back, with a white tea version and Northern Vietnamese sheng version reviewed here.  It's nice having tea friends like that.

A bit about the "ancient tree" source part for the green tea:  it's not the same type of claim as is made for gushu sheng, even though it's talking about roughly the same plants, and it certainly sounds like it.  The quality of sheng pu'er has come to be associated with the age of the tea plants, which evolved into related claims meaning a certain thing, and to some of those being exaggerated.  Related to green tea in Vietnam they're just describing the plant origin; it's not really used as a claim to a type, quality, or aspect range of the tea, as I understand it.

That tea style always reminded me of sheng, and this will be a good way to check on the overlap, even though the Thai version might not be typical of a style of Yunnan sheng, and those vary a good bit anyway.  I mentioned making that type association in this post three years ago, after a visit to Hanoi; funny how rough those reviews seemed back then.


In the last post on a Moonlight White tea by the same vendor I mentioned that they also compress this Thai tea into tuochas, which I'm nearly certain applies to this tea version.


I often go a bit light on the first infusion, to see where things are going to go and get a feel for tweaking brewing approach, as I did this time.

The Vietnamese green tea is nice, sweet and complex, a bit earthy, and a little dry.  It has some vegetal range, with a mineral base that seems common with a lot more typical style green teas from Vietnam, in particular with those fish-hook style Thai Nguyen originated teas.  The astringency is moderated for using cooler temperature water (just over 70 C), but it has plenty of feel from what is present.  The sweetness stays present nicely as an aftertaste aspect.

The Thai sheng is quite different (or sheng-like tea, if you really don't use that term too for pu'er-like teas outside of Yunnan, but why wouldn't you).  It's fruity; not unheard of in Yunnan sheng but not how that usually works out.  It has some mineral structure that gives it a touch of dryness too but not as much astringency as the Vietnamese tea, even though I'm using hotter water to brew it (not full boiling point, around 90 C).  The character is quite positive; complex, intense, and bright.

The green tea is a lot more broken, almost chopped, really, and that one factor alone might account for a lot of the difference in astringency, possibly as much or more of the type difference.  Of course estimating the proportion of that input difference would just be a guess.  I can notice clear patterns in having tried a lot of different versions of teas but extending that to assigning cause and effect is difficult. 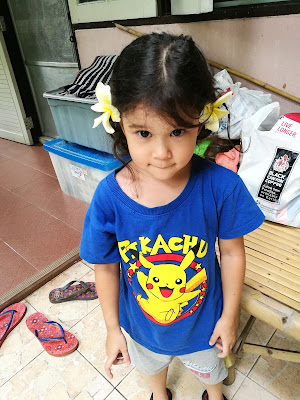 This was a fast infusion, around 10 seconds, but this green tea is bordering on brewed too strong.  It's still in an ok range, it works, but this tea is probably better suited for a light version of Western style brewing than for a Gongfu approach.  Just another guess, of course, but that one I can check during a breakfast this week.  Somehow the astringency is moderate for this, down to just a bit of edge and dryness, low considering the flavor intensity level.  The sweetness is really nice in this; any more intense and it would be too much.


That flavor range seems mostly floral.  It's complex; a catchy kind of floral that seems like a mix of flowers, maybe something like orchid and violet.  I keep smelling plumeria since they grow around our house and on the walk to school I do with my daughter; it's not too far from those.  They're really sweet and pleasant.  We just picked two from the yard and they smells different than the ones that grown along a local sidewalk, or at the pool where those two do lessons, a lot more lemony.


The Thai sheng is in such a different range comparison tasting won't help in terms of outlining common ground.  These are vaguely similar, in a sense, but not in enough of a sense listing out common ground for aspects would work.  The general character runs in a slightly similar direction but that's about it.  This tea is fruity, as the main aspect that hits you.  Beyond that there's an earthiness, a light mineral tone.  It's softer in feel than the green but has decent complexity.  I'll do more with teasing apart a flavor list next round.


The Vietnamese green is still really intense and pleasant; that sweetness and pronounced floral falls into a nice balance with the feel and faint trace of bitterness.  It's a bit sweeter and more floral than sheng tends to come across, without all that much vegetal background in this infusion, but some.  The taste of that relates to the bitterness, as if it's similar to dandelion green.  To me it all works together, but it would depend on preference how one takes it.

The Thai sheng is warmer, richer in flavor, also sweet and complex, but more towards fruit versus floral tone.  Mineral range seems to pick up, drawing that one part of the tea closer to the other Vietnamese green version.  The flavor is a bit complex, not so easy to unpack.  It's really in between floral and fruit (transitioning some, maybe), or spans a range that integrates as one related set.  The floral range is nondescript (to me), with the fruit a little towards juicyfruit gum, something bright and sweet, like dried mango.  It doesn't have the same degree of bitterness but other range fills in so that it doesn't come across as really simple.  At the same time it's not challenging, and it is on the light, sweet, and approachable side as sheng can go.

People familiar with a limited range of sheng might have trouble relating to placing that.  Wild tree versions tend to be softer, milder, and sweeter than commercial plantation source teas, at least in my experience.  To be clear it is hard to separate the effect of factory teas' leaves from tending to be quite broken and more wild-sourced versions from not.  That's mixing a few levels of input, isn't it, not just tree source and processing but also producer type?  Maybe it works better to just describe these teas.


The Vietnamese green is transitioning to being warmer, slightly earthier, and more complex, moving past a more simple expression of just sweet floral tone, with the mineral and slight bitterness "below" that.  It starts to trail into spice a bit.  The bitterness fades back even further; it's nice at this balance, with lots of floral still coming across.

Bitterness picks up for the Thai sheng version; these teas have essentially met related to that factor.  The sheng I'm brewing a good bit hotter though, which would tend to draw that out more.  The fruit range has shifted in balance to more floral overall.  They're still not really close as aspects sets go but much closer than in earlier rounds; they overlap a good bit now.  The feel of this tea is full but not as dry.  I'd expect brewing leaves versus a chopped tea would account for a lot of that, and at least some of the difference in bitterness.

It would be difficult to place them related to each other to the same degree based on drinking them separately, one day after the other.  Trying one then the other just after would help; the tea aspects could stand out in memory better.  But the the round by round direct comparison and matching up of individual aspects wouldn't be the same. 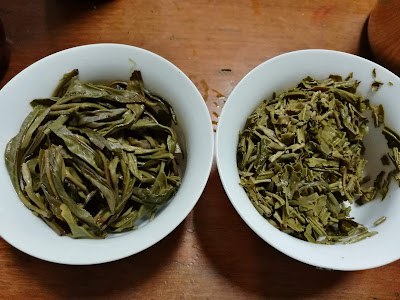 
These teas aren't even close to fading but not really transitioning much either.  In the Vietnamese green tea that balance of sweetness, floral tone, warmer flavor complexity, trace of bitterness, full feel and sweet aftertaste is nice.  It works.

It's interesting how similar the Thai tea is, how all those aspects are matched by slightly different versions in the Thai sheng, which balance a little differently.  It would be possible to tease it all out, describing how floral, sweetness, the trace of warmer earthier range, and overall balance are all different, but all related.  It would just be more trouble than it's worth for being informative.  That trace of more vegetal range in the green tea stands out as a difference, swapped out for fruit in the other, and the astringency (feel) is a little different, but these are closer than I expected.

The next round is more of the same; bitterness seems to be picking up a little in both.  I still really like both teas though.


It's interesting how they started so different and drew closer, and interesting they're that similar for being two different tea types.  Those "ancient tree" Vietnamese green teas always did remind me of sheng, and it's interesting to try them alongside each other to see just how close they are, or ways they don't match.  It helps that they're both nice versions of the different types.

It's hard to put this Thai tea on a scale for being typical of some version of Yunnan sheng.  Those vary a lot in character, by region, related to processing and source material, and quality, by lots of factors.  It works well as a young tea but it might have enough of the right aspect range to benefit from aging, but at this point that's more of a guess.  I really should buy a couple of tuochas and check on that, since the pricing seems fine for what the tea is.  They cover that in their FB vendor page, and the last post on a Moonlight White version includes a conversion from baht (which isn't that tricky; it's usually around 32 or 33 to 1 USD).