Visiting Sasha for a tea tasting

This past weekend Sasha Abramovich had a few people over for tea, three plus himself.  It was nice switching format like that after doing different forms of tastings in the Benjasiri Park the two weekends before (just off Sukhumvit in central Bangkok).  Drinking tea in someone's home simplifies a lot of the parts of the process, about bringing gear out to some location, and using better water, and just having extra tea around since the host might have a whole stash to draw upon.

I just mentioned editing this post to Sasha and he summarized that this way:

I think that the main ideas are mont fleur water (from Sahapat), purified with bamboo carbon (100baht, sustaina shop), and the entire concept of comparative tasting. 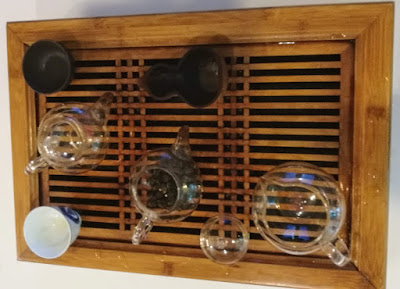 I'll say more about that last point later.  Sasha put on some nice Middle Eastern themed instrumental music (I think it was), and it's nice to be in a temperature controlled atmosphere in Bangkok around noon.  I typed this first draft at home around 10 AM and being in a shady spot at the dinner table the temperature was fine, but a couple hours later drinking hot tea might seem less natural without air conditioning on.

Jeff attended again, one of the guys at the park tasting, an American living here, and one of Sasha's local Russian friends, Miro.  Since I just visited Russia over New Years it was interesting getting back to talking about tea culture in Russia, and some pretty far out there tangents, like if a lot of the Russians in Pattaya really are mafia.  That's a reference to a Thai stereotype.  Of course if you walk around Tokyo and see a guy with a lot of tattoos more than likely he's just into tattoos, not Yakuza, and to some extent guessing about Russians in Pattaya would have to relate to a hasty generalization like that.  Russians in Russia are just like everyone else, if maybe a bit less outwardly cheerful and more plain-spoken, more likely to express what they actually think.  That's the opposite of here, since Thai culture emphasizes the importance of observing a defined social role and keeping things positive; one type of smile might indicate that a Thai disagrees with you.


Sasha laid out what we might drink that day, a lot of tea, probably too much for anyone to try in one sitting.  In a really nice touch he asked us to choose our own style of tasting cup from a collection of a half dozen in different styles.  I'm not of the opinion that shape and material changes flavor and other experience as much as others would tend to claim but it is pleasant and positive to use a cup that you like; it definitely adds something.


The one I used was very nice, basic, but colorful, not flat like bowl-shaped versions, but open enough to and deep enough to be easy to use and allow for the aroma of the tea to drift up and out. 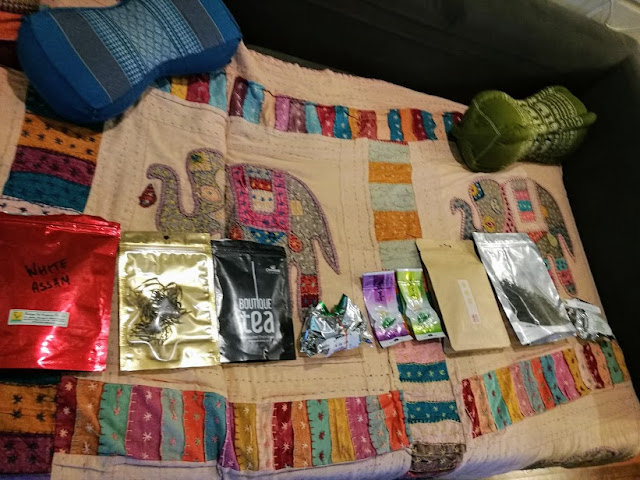 I'll list out from memory what we did try, which worked out to fit into a comparison tasting theme, trying two similar versions at the same time.


Silver needle:  a version Noppadol passed on at the prior tasting (from Fuding, China?), and an Assam version from Sasha's tea collection.


Moonlight white:  I think we tried three of those, two from Darjeeling, and maybe a third I don't remember the origin of.  I could edit this once Sasha reminds me of that but it kind of doesn't matter; this isn't that kind of post.  He did fill in a lot of specifics about what we were drinking then but without notes I tend to not retain details.  That's one point behind writing a blog; so that I can look back on what I tried, and refer to links I've cited again later.


Taiwanese oolong:  two very good versions Sasha provided, one a Da Yu Ling.  There's a catchy, bright mineral and floral tone better Taiwanese oolongs have and that one certainly did.  Sasha mentioned that in his impression the best Taiwanese oolongs lose some of that initial intensity even after a relatively short storage time (probably related to air contact; they would hold up better well-sealed), and that tea probably had been even more remarkable some weeks before.

Black tea:  we tried a Moychay large golden needle version I brought, one I've written a draft of a review for, so I'll hold off on saying more about it until there. 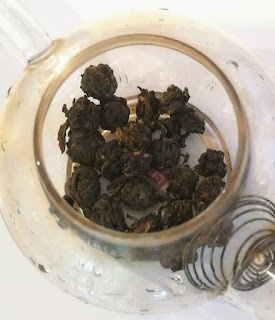 A Darjeeling black pearl black tea might have been the most novel tea we tried (from Rohini, if I'm remembering that right).  Oddly I tried an Assam-style Thai version of a rolled black tea that seemed to be a variation of the same thing two days later, but I'll get back to that.  It doesn't really work to pass on a one-sentence summary review from trying a tea three days ago but it seemed pleasant, complex in aspect range, and unique in style.  For a tea that unusual messing around with parameters is probably in order, even though it is a black tea, about as forgiving for brewing variations as broad tea categories get.


For as much tea as we drank I still might have missed mentioning one.  It was nice splitting the difference between closely considered comparative tasting and chatting about different things, alternating between those two themes.  We had planned to try a Jin Jun Mei version Jip Eu passed on in a recent visit but didn't get to it, so I shared some instead, in the tea-exchange part at the end.  It's nice to have even more interesting teas to try from Sasha but I didn't get to all of them from the last two tastings yet, so I'll be leaning into post frequency here to try and catch up.


On the tasting side those descriptions do seem a bit limited.  It works better to write those as you go, and it was hard enough just keeping up with what version of the two being compared we were on along with the conversation tangents.  Sasha has visited India and tea growing areas in Darjeeling and Assam, which made for a lot of interesting background about those places, and how visiting tea producers works out there.  It sounded like Darjeeling would be a really interesting place to visit, not only very beautiful but also one that wouldn't necessarily require a lot of pre-established connections to turn up some interesting visiting access options.

I'm not sure anything we tried was really a surprise, except maybe for that black pearl tea--that was different.  The Assam silver needle stood out for including some interesting regional-associated mineral aspects; kind of how that often goes.  I've noticed a similar pattern in trying Ceylon white teas before, how the style can be similar to versions from China or Southeast Asia, but parts of what make their black teas distinctive carries over, adding a cool extra layer that works well given how subtle white teas tend to be.


Moonlight whites from India are nice, nothing like Chinese Yunnan versions, or that one Thai version we'd tried from Noppadol in a tasting two weeks ago.  They're not that far off white teas from Nepal, it seems to me, which are probably more or less copies of Darjeeling originated styles.  In the better related teas from both areas a really catchy, bright, intense floral and mineral tone stands out, in between flint and some bright floral range.


To me those work a little better than trying silver needle in that setting since they're just a little more straightforward and intense, so you don't have to focus on them so much to notice of appreciate what's going on.  A small group of that size who had tasted teas together really could do a meditative, focused tasting session but when first meeting people some degree of spontaneous chatter seems natural, and really better.

Buds-only black teas, like that golden needle version, really do work much better for getting parameters just right, as with silver needle white versions or teas in a similar style.  It worked out since the general theme was trying different lighter teas but it might have also been more interesting for being paired with something comparable, as the others were.  The black pearl tea was really at the opposite end of the spectrum, on the intense and straightforward side, earthy but sweet, with a lot of aspect flavor range versus the other black being quite subtle.  Comparison tasting works best with very similar teas--you tend to pick out finer aspects that way, which stand out--but trying a contrast instead can be interesting in a different sense.


It was pleasant trying those two Taiwanese oolongs, and interesting comparing them.  That general range of styles isn't really new ground for me but better versions of those oolongs make for an exceptional experience, as those did.  I haven't been drinking much of Taiwanese oolongs since the beginning of last year, related to passing through Taipei at the end of a holiday-season vacation back home (to Western PA).


I'm not sure what the next tasting event will be like; when we will get back to holding a more open format version, or where.  I'm still looking into a really unique location for one, and availability for that will affect outcome.  I picked up some more equipment that would relate to such a function in a recent visit to the Bangkok Chinatown, but that's a different story for a different post.