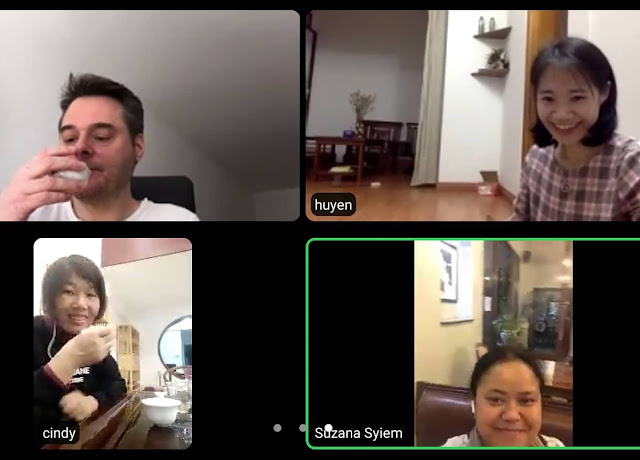 There's something new related to tea I've not mentioned yet, that meetup circle of three other friends and myself trying out extending that form to include other people joining.  This describes how that goes, and introduces those others, all with really interesting background related to tea, more than it covers the discussions content.  I wrote some notes on the specific content of one of the meetups but I'll hold off on that post until some later news adds to that.

One issue with even meeting with those four friends is dealing with the online form.  Work meetings are like that over the last year, of course, from working from home for nearly half a year, but social meetups are different.  The feel and pacing, and potential to embrace tangents, all vary a lot more than a structured work-meeting form.  For background context those friends are Ralph Rauschert, Huyen Dinh, and Suzana Syiem, all experienced, committed tea enthusiasts and active social media participants from Germany, Vietnam, and India, respectively.

Encountering all these contacts relates to writing this blog, of course, and also to experience in moderating a tea group that I helped found, International Tea Talk. 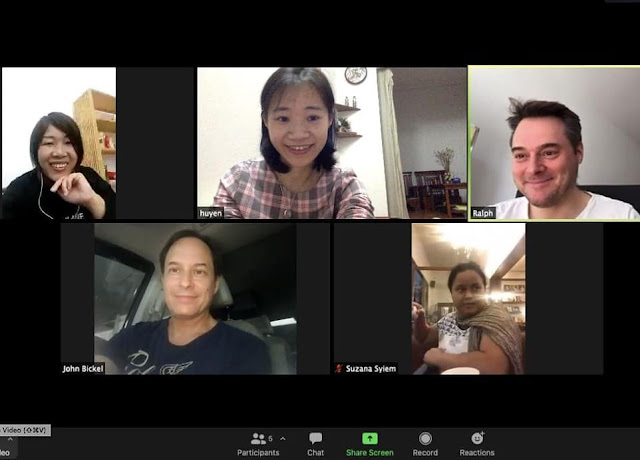 Let's start with who we've already met with; that part is amazing.  We talked first with Jaba Borgorhain, from a tea producing family in Assam, next with Anna of Kinnari Tea, a Laos tea vendor and development consultant, and Cindy Chen of Wuyi Origin, who needs no introduction for many.  She is a very well regarded Wuyishan based producer, from a traditional tea producing family there.  She's in a very unique position for being part of a Chaozhou, Guangdong tea producing family; her husband's background.

I've met all these friends and the meetup attendees in person with one exception: Cindy and I haven't crossed paths yet.  That's a real shame, because she's as kind and genuine as anyone could be, and experienced with the subject of tea on a level we conventional tea enthusiasts can't really relate to, born into it.  Cindy's daughter could Gongfu brew effectively at the age of two.  That girl probably could've taught me a good bit about tea at the age of four, and I'll never catch up to her current exposure level.  Cindy must have been like that, steeped in an amazing degree of tea exposure by early childhood, which kept on going from there.

Going into these sessions one open question was how well the form would work.  It was never set up as any sort of interview session, with no fixed format or scope.  As those months of online meeting with my other friends went on over 2020 we talked more about what was going on than tea, of course always passing on local pandemic updates.  Meeting new people for the first round raised a concern over how introduction would go, and theme focus, versus actually getting to what those joiners had to contribute about their tea experiences.

In all three cases their exposure runs incredibly deep, maybe more so for Cindy being in those unusual circumstances, but really just more different in type than degree for each.  Anna's background spans tea vending, running a shop, producing an RTD kombucha, helping producers adjust processing, and onto NGO coordinated development issues.  Jaba is from a tea producing family and covers some of that same diverse scope, with an interest in tea history and fair trade issues.  Laos and Assam are seeing changes in longstanding tea traditions as they become something they never were before, versus Chinese forms being more grounded in history and consistent, both in terms of the tea itself and the culture.  Plenty of change and disruption happens there too; I mean relatively speaking.

Talking to Jaba stuck with the subject of tea more.  Ralph and I met her here in Bangkok the first day that I met both, so that bit of introduction was already complete.  The Indian / Assam context being so familiar to Suzana probably helped.  Development issues were interesting, about what is changing, and what will continue to change.  That's the part I expect to report more on in the next couple of months, so I'll set it aside here.  One thing I didn't necessarily expect was discussing local tea preference issues and import and shipping concerns in Vietnam, Germany, and Thailand, the conversation scope going in both directions like that.

Meeting Anna was more of a personal introduction.  Her tea background extends to significant awareness across a broad range of traditions.  The development themes about Laos tea are perhaps even more fascinating, for starting from closer to scratch, in an odd twist based partly on use of tea plants from an older tradition that are far older than anyone living today.  That mix of inputs can result in production of some amazing forms of tea.  But we didn't get too far into that.  Interpersonal inputs can play into discussion scope, without a clear theme or central moderation keeping it on a limited track.  Anna seemed genuinely interested in finding out about the others, instead of just talking about her history. It's not as if that introduction scope is a bad outcome, or one that falls short in some sense, even though it would replace some novel potential related to the subject of tea.

Some of the same happened with Cindy; we didn't get far talking about her tea.  At one point she discussed her personal favorites, and it even drifted into discussing pu'er versus Chinese oolongs, but it never settled into a Q & A scope, about processing or tea types, or into much history.  Cindy did mention how Wuyishan tea demand has transitioned over the last 20 years; that was really interesting.  One cool part about Cindy, which really applies to the other two friends as well, is how tea expertise and related perspective is amazing but she shines as a person even more.  If I had to choose between never talking to Cindy again or never trying any of their tea I wouldn't miss the tea, even though it consistently represents the best quality versions of any tea that I've ever tried.

The complete meetup potential was never clear, if the form would turn up some novel further direction.  For now I think it's  little too chaotic and unfocused to shift to include more scope, for example to add more participants at the same time, or record sessions for sharing through video with others, or to add more structure in any way.

It's a potential problem to look back at each session and regret what wasn't covered or expressed, a bit of which I'm guilty of passing on in this write-up, and in immediate perspective after.  That seems to be looking at the glass that's half empty.  A social meetup is about the social part first, or else it's a topical interview or whatever else.

Meeting any or all of those three again would be nice.  For not getting into that much about tea we left a lot of ground uncovered in the last two sessions, but the introduction was more a main theme.  Jaba has more to cover about tea too; there will be plenty of updates about local changes we only touched on in general that time.

Maybe the most interesting potential relates to online contacts who have agreed to join but haven't yet.  Russian tea culture has been a favorite theme for a long time, since visiting there three years ago, and trying a lot of great tea from Moychay.  We've not been able to connect yet with a friend in Nepal who makes great tea, and tries out some new related themes, co-op processing and agricultural tourism.  I know some other tea producers, and Eastern European tea culture is interesting; lots of places are.  It's funny how it works out that it would be interesting to hear more about American tea culture, an interesting subject that gets far more attention online than the related Chinese experience, at least in the "Western internet."

Since I've not did justice to introducing these meetup visitors I'll share some links that go further with that, prior writing about them and what they've been up to, with an extra reference contact added.

Kinnari Tea Laos Moonlight White (maybe quite out of stock, but an example of an interesting tea)

Trying Assam falap, a variation of bamboo sheng (from Jaba, an interesting tea, but I'm not sure if they actually sell it or not)
Oiirabot Instagram page