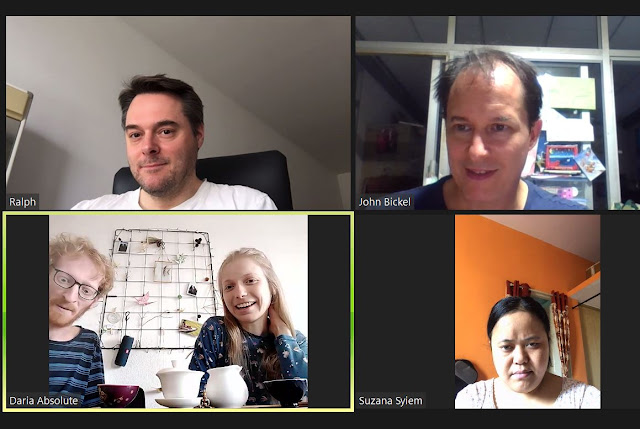 There's no need for me to keep writing every time that group of friends and I have an online meetup, a video version of a phone call, or social get together, but I'll briefly mention one more, and others that follow as long as it makes sense to.  We met two very interesting tea enthusiasts based in Amsterdam this past weekend, discussing tea themes there, and even more about general experience.

The contacts are Daria and Dmitry, real-life contacts and friends of my friend Ralph.  Daria is an artist, whose work can be seen on Instagram and Telegram.  They talked about visiting the new Moychay tea club and shop there in Amsterdam, their first in Europe, which I also wanted to mention, since I may or may not have brought that up before.  I'll add a bit more about the Moychay theme in a later section, some photos.

The rest was what you'd expect, personal introductions, talking about tea experiences and preferences, what we were drinking just then, local cultures, etc.  It's all the more interesting because people in different countries naturally experience different local tea culture based on varying personal exposure.  Even something relatively central, like contact with a somewhat original Chinese tea tradition, varies in form and content quite a bit.

Tea perception in India has been serving as an example paradigm, beyond China and these local areas (Amsterdam and Russia, over the last two meetups), based on Suzana's input, and related to that serving as a good example case.  German tea enthusiast subculture would be like that in Amsterdam, and in an online environment like a Discord group actual contact could overlap.

It was particularly interesting that Daria and Dmitry had the experience to fill in some of what we had covered about Russian tea culture the last time.  The topic of Russian "prison tea" or chifir had come up on a Reddit post recently, and Dmitry described actually trying that (incredibly potent over-brewed tea, intended to cause a drug-like effect).  His take:  pass on that; it's not a pleasant experience.  In looking up that recent thread link it was interesting how it was also discussed there four months ago and four years ago.  There's nothing new under the sun, at least on r/tea.

And we talked about Ivan chay / willow herb / fireweed, and tea club forms in different places, variations in local preferences, about masala chai versions; all very interesting.  Ralph offered that licorice root served as a secret ingredient that made masala versions served at German music events especially tasty.  Suzana rejected that this works as a conventional masala chai variant, even though it might be pleasant.

One extension of that meeting form we've been considering, and never really resolve, is how to expand that kind of discussion to include more people, versus one or two different additions each weekend session.  Recording and sharing the sessions would work, but since they are just social meetups, not really formatted for that, it's not appropriate.  It's not an interview, as in a podcast form, just people talking.

Adding more members is an option, letting another few--or many--people join, but that's also problematic.  We've had 5 people meet together this past weekend, and 6 the weekend prior, and that felt like a practical limit, so many participants that not everyone was as actively involved.  Having 10 people meet would require some sort of change in form, something like basing discussion around a central panel or guest, with some form of moderation.  Unstructured informal discussion is better, in a sense, more comfortable.  But it would be nice to share the experience, if we figure that out.

With even 4 people discussing tea it's hard to dig far into personal favorites, brewing practices, and exposure background, and then new findings beyond that, about recent events and such.  Over the course of most of a year it did work to go into that, in talking with Ralph, Suzana, and Huyen in weekly sessions.  Huyen took us a cool step beyond that recently, sharing live video of tea processing in Ha Giang, a prominent tea production region in the far North of Vietnam.  That wasn't one of these meetups, just a spontaneous call, which I'll add more photos of along with the Moychay theme in a  following section.

As I mentioned sharing these summaries partly relates to potentially evolving and opening up this form of discussion later on, but related to just continuing on in the same form, it would connect organically to continue on to exploring Eastern European tea culture.  Really there's a lot going on in different places that it would be interesting to hear about.  Latvia in particular comes up as a center of local tea culture, and I've written about tea culture in Poland, and run across chance contacts in lots of countries (Italy, Spain, Indonesia, South America...).

Some of that local culture contact relates to posts in the International Tea Talk FB group I moderate, or elsewhere.  Beyond discussing local culture it would also be nice to get back to exploring tea producer contacts.  It never did work out to include an online friend from Nepal, and it would be interesting to hear about status in a few other countries, after earlier discussion with producers from India, China, and Laos (two from there).  Maybe even the US.

Moychay's local club and enthusiast Facebook page shows more photos of that space (with this their main site).