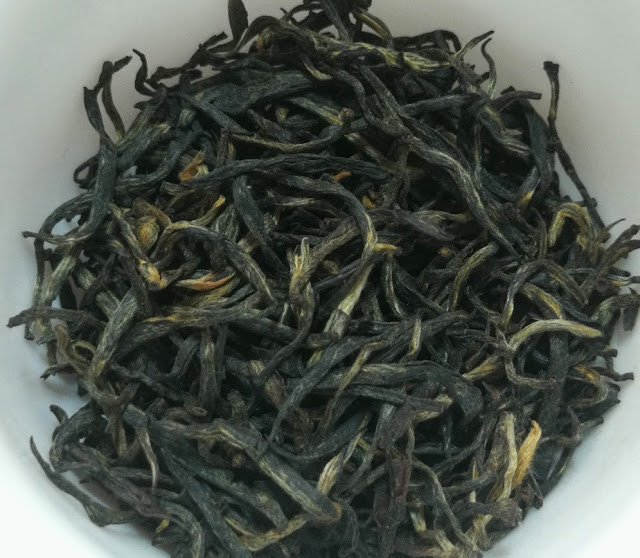 I visited my favorite Chinatown shop not long ago, Jip Eu, the first time in ages.  A really nice local tea enthusiast me me there, someone I've been planning to meet for a few months.  We may have started talking through that now-inactive Bangkok tea tasting group.  Pandemic exposure seems kind of minimal now, dropped back out by everyone doing a couple more months in isolation earlier this year, so it would be fine to meet in real life.

I didn't take pictures of the shop or her.  That visit was rushed, and not everyone likes for their image to be circulated.  I'll introduce her more completely in another post about a real life event, hopefully.  It was great seeing Kittichai and his wife again.

He let us try a Jin Jun Mei version he described as unconventional for being made of larger bud material, but the same as JJM in other regards.  It was nice, much better than a gaba black tea version I brought for him to try.  Then again I just don't care for gaba teas, maybe related to part of that theme being about a varied feel effect, that I don't really "get." 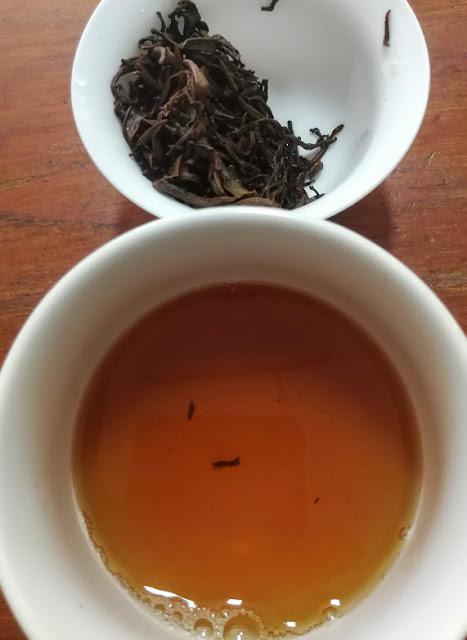 First infusion:  it's definitely along the lines of Jin Jun Mei.  There are variations within that main type, different oxidation levels or other processing inputs, or maybe tied to plant types or terroir, I'm not clear on that.  But it's not exactly all one thing.  Cindy sells a honey intensive version and another (Wuyi Origin does), and this is warmer and more towards a conventional black tea range than those.  This looks a lot like a version she sells that I've not tried.  It's made from larger plant material, not only that very fine bud, so if anything this is probably atypical, but then it was presented that way.

There's a honey-like flavor in this that is common across a lot of what I've tried for JJM, or at least that I think I recall.  It's a warmer, less bright flavor than in some in this version, like a dark version of honey.  It's quite appealing in both forms, to be clear.  This leans a little towards a softer and milder version of what could rightfully be called malt, not the one that's in Assam, but the range in Ovaltine.  It includes a bit of cocoa too.  As I see it these three inputs balance and define this tea, with more about an underlying warm mineral tone filling in some context.  That's probably going to be the basic review but I should come back to that flavor list theme and fill in more about other aspect range, feel and such, in the next round, once this is properly "opened up."  It is already infused stronger than the typical light round I often start with but it will probably evolve and transition.

It's good; pleasant and complex.  That I already knew from trying it in the shop; just being clear. 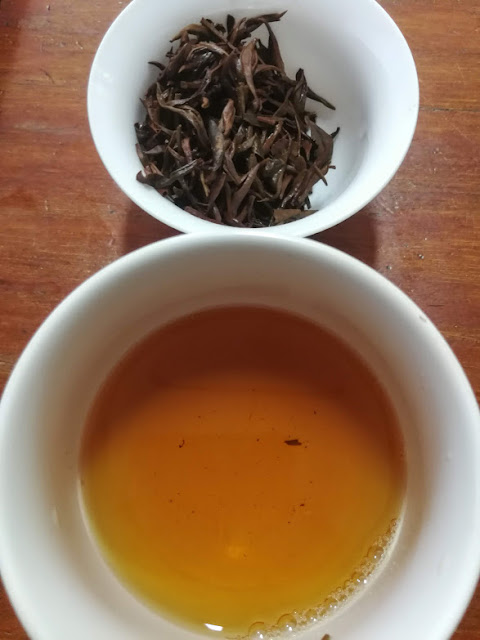 Second infusion:  nothing really changed; maybe the mineral tone warmed just a little.  Sweetness is still really nice, and honey and cocoa notes work just as well.  It's nice how this has a relatively rich feel too, and a hint of dryness and those warm tones carry over to a pleasant aftertaste.  It makes the experience seem more complex.  I might be able to strip out some other aspect to describe, especially across a few more infusions, but I think I'll keep this simpler today, stopping short of a 1200 word description.  A bit of some sort of richer dried fruit might fill in a little range beyond the rest, towards dried tamarind but not quite that, or maybe exactly that with the effect of the other flavors mixing with it.  It reminds me a little of the richer versions of dried mango too, if that rings a bell more.

I think since I'm not so in the mood to write out a six infusion cycle today I'll take this review off the rails a bit and compare this to an aged sheng that's not quite brewed out yet, from breakfast.

But why!?  Probably for no good reason.  It might be interesting seeing a contrast in character, something clear in one that's missing in the other, easier to appreciate for the contrast.  It's an older 2004 version of Dayi 7542 from this shop, or an alleged version of that, given how the first reaction so many people have to such a version presentation is "that's not real!"  Maybe it is, maybe it's not, but whatever experience I'm obtaining from it is real enough.  That tea was at least a half dozen infusions in, on the backside of the infusion cycle, and this is only on it's third, but I was brewing these a lot longer for not pushing the proportion quite as much as I usually do, to absolutely all that fits after the leaves are wet.

A lot of people might not mix these teas related to mixing the secondary "cha qi" feel effects, but since I tend to not really clearly perceive that it's not a concern. 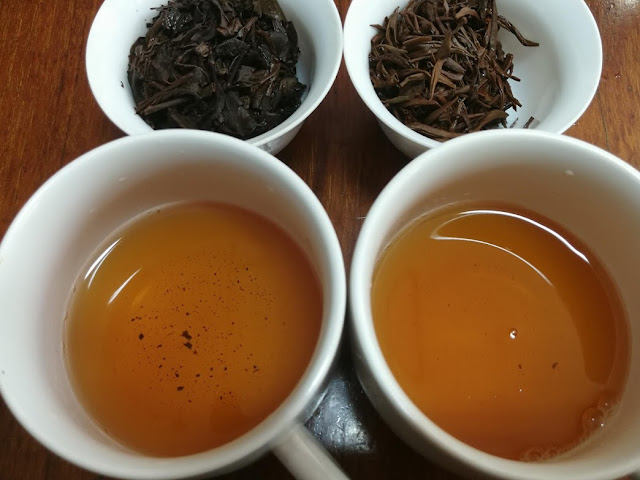 Third infusion:  more of the same for this Jin Jun Mei, but it is evolving.  A bit of sharper edge picks up, not the faint hint of dryness.  It's still definitely nothing comparable to a more conventional black tea range, a solid astringency structure, but the honey and cocoa pull back a little and some tree-bark tone sets in.  There's still a sweetness and smoothness to the base that really sets the context for the rest of the experience.  That part tastes like Jin Jun Mei, for those familiar with that.

Since it's a contrast the aged edge of the 7542 really stands out.  Drank alone that's one input along with others, but alongside this it tastes a lot more like old barn for including it.  Bangkok storage is hot and wet, of course, with an end effect different than what I have experienced as a main theme in Malaysian storage, but towards that.  That never amounted to enough examples to draw the broad conclusions that even rookies tend to express.  Or maybe tea newbies are more likely to go there, to try 3 or 4 examples across a broad range and think they've really got it mapped out.  Compared to older, best-established reference perspectives I am a tea newbie, but at this point it might be fair to say in the middle now instead for exposure, just not far along.

There's an aged-wood tone that works in this 7542, a variation on what I tend to call aged furniture.  Someone could like that or hate it, but it seems like people tend to develop likes related to aged sheng based on story lines they take up as much as original or even developed preference.  I'm not sure how this fits into any "experienced sheng enthusiast narrative."

Tasting back and forth the honey sweetness and richness of the Jin Jun Mei stands out all the more.  Part of that edge comes across as a hint of sourness more in comparison, for whatever reason.  I think the 7542 is a little thinner in profile, giving up a bit of complexity for being 8 or so infusions along, and a little richness in feel, which might also relate to how some aggressive storage conditions affected it.  It has been through a lot of heat and humidity.

It's interesting how an underlying mineral tone in both almost matches, but really doesn't.  The version in the 7542 is more like wet stone, leaning a little towards struck-match, with the JJM more like dark wood.  The JJM definitely seems "fresher," it's just strange using that description for this type of tea. 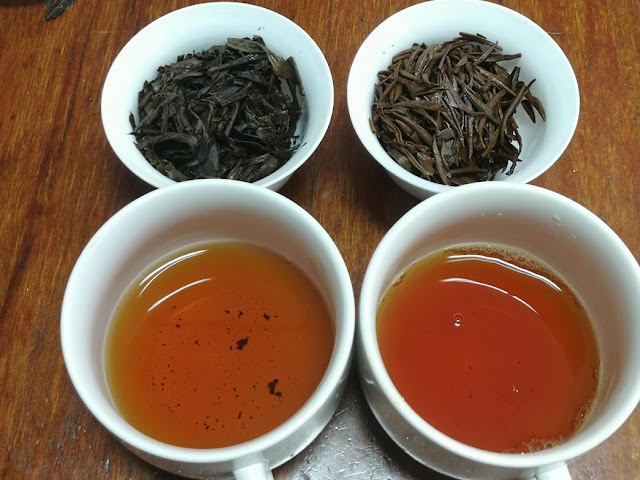 Fourth infusion:  these both brewed for way too long, due to me messing around online versus pushing them to identify flaws, or something such.  At least it will provide a different kind of look at them.

The Jin Jun Mei is good this way, and interesting for being different.  That edge didn't push further towards dryness or sourness, and honey-like sweetness, a touch of cocoa, and dried fruit character is still there, holding its own against a stronger tree-bark edge related to overbrewing it.  By tree-bark I'm thinking something like birch, or maybe closer to cherry, not as light and dry, but not the heavier, earthier thicker oak-tree bark.  Cinnamon starts to pick up, but it's even more noticeable in the next round, after I stopped taking notes.

The 7542 is interesting for really bumping up that one input I'm botching describing, an underlying mineral (a different one) that connects with an aged wood / furniture tone.  That would probably get described in lots of different ways by different people.  I don't see it as related to camphor but that a broad range of aspects seem to get swept together and referred to as that.  The longer infusion worked equally well for both of these; that thinness drops out for this aged sheng, and the overall effect is cool.  It was still slightly strong (brewing them for over a minute), but at this point a 45 second to one minute time might make sense.

It is what it is!  To me this tea works as a cool variation of a more conventional Jin Jun Mei, a very nice black tea that stands on it's own merits.  It is JJM related to seeming like one (so "very nice" here is intended in a relatively strong sense), just a little different for being made from a related but different material, from larger buds instead.  Unless I've got it wrong Cindy has explained how the two aren't just different age versions of the same plant component, they're a different thing.  But this isn't a research or expert interview oriented reference post, so I'll leave off at saying that.

I could be clearer on whether or not Kittichai even sells this.  He may or may not; they often enough give me interesting teas to try that aren't a part of that theme.  They're not impossible to get ahold of, so someone could phone them up or send an online message to find out.