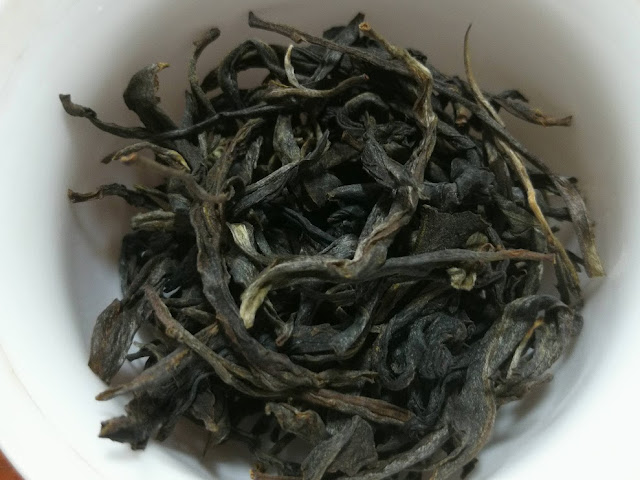 I'm trying the second tea version sent for review by a Taiwan based vendor I reviewed versions from awhile back.  At least initially this is a blind tasting format; the label is Chinese, and I didn't look it up prior to tasting.  I just assumed it was rolled oolong at first, since they sell both sheng pu'er and that, but it was clear enough even before opening it that it wasn't that, from the feel.  It's really nice smelling sheng.

I'll fill in what it is in the conclusion section at the end in a final version of write-up, but it turned out it was a 2020 Mannuo Ancient Tree sheng pu'er (with their main website here).  The post title theme works either way, as a direct review of that or tied to the form in which I tried it, or failing to choose, and listing both. 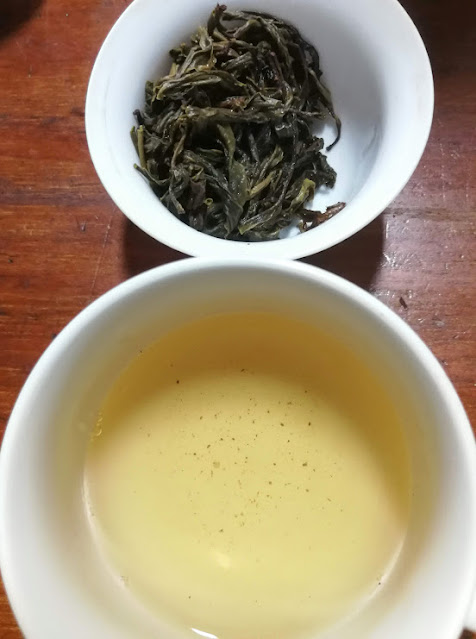 First infusion:  very pleasant, sweet and creamy.  It's fruitier than sheng typically is, reminding me of a Nannuo that was a favorite in the past, or maybe even the somewhat matching character of several LBZ versions.  This is too light yet to really get a read on where bitterness level and type will settle, but surely it's moderate. Feel is a bit soft too, not necessarily thin but lacking a typical structure.  Some of that is probably related to a processing style input, but I won't go into guessing about that part.  This has that white grape / pear flavor aspect range I really liked in that one Nannuo (the first tea I bought from Moychay, a random pick that worked out well). 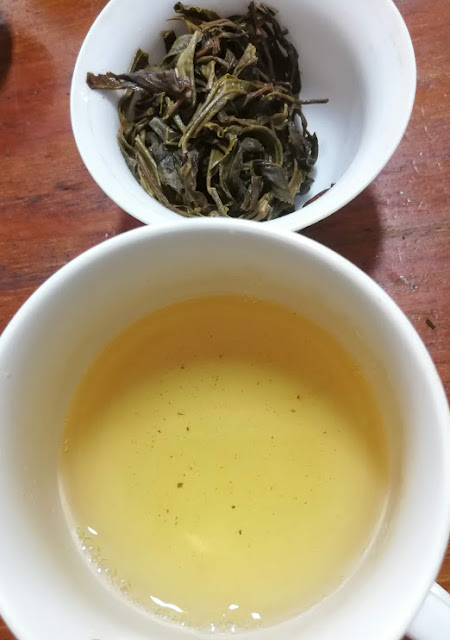 Second infusion:  a pleasant bitterness picks up in this, moderate in intensity but positive in form.  It tastes a bit like biting a tree bud, kind of "towards aspirin" as all bitterness is, but in a pleasant form within the broader range.  Sweetness stands out more, still in that fruit range, and the creaminess.  Sheng usually isn't this creamy; that part is hard to place.  It pulls that taste, which is moving more into a light orange citrus, towards creamsicle.  Creamsicle with a bit of complementary bitterness is interesting.

Along with flavor extending a bit into cream the feel is like that, full and round, not missing structure typically present in sheng but swapping out a good bit of that for a very different fullness.  That Moychay Nannuo was like this related to flavor, a bit, and it was a low-bitterness and approachable feel tea, but it didn't have this creaminess, and didn't shift into citrus range like this.  Next round it should be more where it's going to be across a longer cycle, maybe just a bit more novel.

That bitterness is present in a stronger form in the aftertaste, or at least a higher proportion in relation to the rest.  That's pleasant. 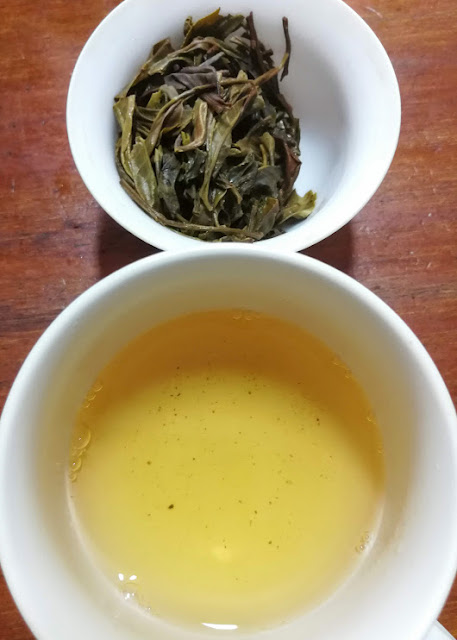 Third infusion:    intensity is good; this is really hitting, even for being brewed relatively quickly.  Now bitterness does match the sweetness and creaminess, with complexity ratcheted up.  Right after you swallow the tea you get a rush of the experience strengthening, then the rest lingers.  A bit of stronger light mineral fills in; that's part of this becoming more complex and intense.  Feel is a bit more structured, but not astringent or challenging.  This really does seem like quite pleasant tea.

I'm curious about what it is, and how old it is.  It could be a very young tea that just happens to be on the soft side, but it would make perfect sense for this to have had a couple of years to round off rough edges to get to this character.  The brightness and apparent freshness marks it as not really transitioned much by age at all.  If this was stored very dry this could be 3 or 4 years old but if it had spent time in Taiwan in more humid environment I wouldn't expect it to be more than 2 years old, and it could be quite young, just a soft tea to begin with. 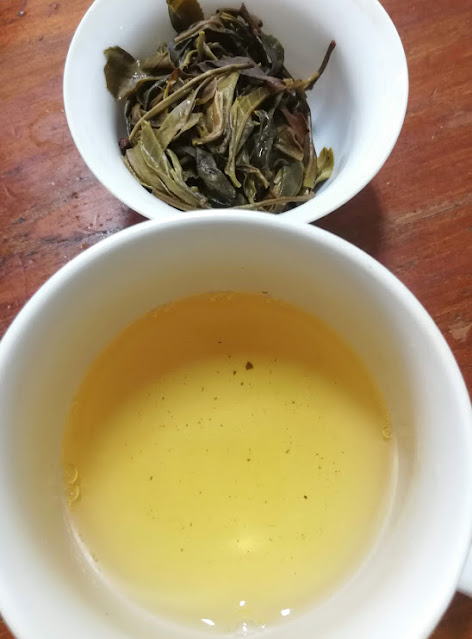 Fourth infusion:  the real story of this tea is how appealing that set of aspects is, and I can't really do justice to that subjective experience.  It's just good.  It's so good that considerations about how it might improve with aging kind of drop out; it doesn't need to improve, and I'd need to be holding a lot of this tea to want to see the results of that experiment, versus just drinking through it.  "Creamy" may not be as clear as it could be; this coats the inside of your mouth.  It's a cool feel sensation, along with that pleasant and novel flavor range, well-matching bitterness level, and positive form of aftertaste.

If this tea cost a good bit that would be justified, regardless of its origin story.  It's a more positive tea than I tend to usually drink.  I've reviewed an LBZ version not long ago (or "presented as such," for the skeptics, who probably shouldn't be reading this blog anyway); it would be interesting to compare the two.

Fifth infusion:  the flavor is so complex that it's hard to do better with a description.  It's on the fruity side, but that complex range of flavor could be interpreted differently, and it's my impression that it covers a set.  The list hasn't changed:  creaminess (both feel and taste), citrus (between light orange and lemon, maybe tangerine), mineral (just a bit warmer now), other fruit (kind of subdued and in the background), floral undertone (really as floral as fruity now, but in a form that comes across as vague for covering some range).  Then there's sweetness and bitterness, with both relatively intense while you drink the tea but hitting like a wave as aftertaste when you first swallow it.

I'll skip further rounds; I have a couple of things to do.  I will look up what this is and write some thoughts on that.  Related to trying those later infusions it stayed positive but dropped off, not extending into as long a sequence of similar range character rounds as many sheng tend to.  I didn't see that as a sign of moderate tea quality, more a function of how "approachable sheng" tends to work out.  It wouldn't be unusual for people to frame that more negatively, looking for structure in their sheng, and a different kind of intensity.

I looked up what it is

That age makes sense; it was just a soft tea to begin with, with quite moderate but notable bitterness, and mild astringency.  The brightness and freshness definitely matched it being young.  The "ancient tree" part we can almost set aside, but to some extent older plants and more natural growth teas can seem to relate to moderate astringency and novel flavor range (respectively).  Gushu often can be subtle in flavor intensity with a strong mineral base flavor, but then more wild growth versions would shift that to be softer with more focus on fruit or strong floral flavor.  But it's best to take the mapping of marketing description and hearsay character per input with a grain of salt and just go by what the tea expresses.  It's definitely not a personal strength of mine to map out a large matrix of origin locations and input conditions to experienced aspects, which is why I keep the guesses a bit vague in more blind tastings.

I've tried tea from that origin before but not enough to establish any baseline.  I think I might've reviewed a pressed version from them (yep, a 2018 version, a pressed cake, the more conventional form).

Again value stands out for this tea, as much as the character.  This is selling for $60 per standard cake, more or less, 20 cents a gram (not far off what the other one was).  This is much better tea than some prior $80-90 versions I've tried from Yunnan Sourcing and Farmerleaf, although there is some adjustment to be made in that "better" evaluation related to it being based on preference, and me liking fruity and approachable sheng.  That said, this tea is a steal.

The general character reminds me of a "wild tea" version I tried selling for well over 50 cents a gram not so long ago, which may or may not have been a good price for that; it can be hard to tell when versions aren't mainstream, types that don't turn up often (as far as I know).  That was this Moychay Yongde "wild" sheng version related to sweetness, interesting flavor, moderate bitterness, great intensity, and softer feel structure.  Then again if I tried them side by side maybe I would think my memory of that character similarity was off in some way.

One might naturally wonder if there isn't a character limitation at play that I've referenced a few times but not completely spelled out, related to the "oolong pu'er" theme, and this being so approachable at this young age.  Related to letting this sit for 15 years and appreciating it then, probably.  This will warm in tone and drop out some freshness over the next two years, but there's no astringency to soften and transition to something else.  I don't think it would be more positive after that two years, and would probably decline in appeal after that.  It's really good now though.

To some this bitterness could be disappointingly limited, and the creaminess could be a flaw, a gap in expressing more feel-structure instead.  This is a sheng an oolong drinker would love, and for some that would be a huge turn-off.  I couldn't relate to seeing this character as a gap, the set of aspects I've expressed, but subjective preference is like that; we work with the perspective that we have.

I've stated clearly that I really like this tea, and that it seems like a great value to me, with one more aspect of my own experience highlighting that.  I bought some for my niece as a wedding gift before this post was finally finished.  I might get around to buying more for myself too.

I didn't criticize the "ancient /  old plant source" part here.  Was it that?  I don't know.  I think I can accurately spot some typical patterns related to older plant source sheng, tied to a certain feel range, and strong underlying mineral content, and this doesn't match of that.  The "wild" plant type theme might match up better, and those two ranges can overlap.

I asked the business owner, or business-front staff, (Sonya?; I'm bad with names), why this tea is as good as it is, which couples with the question of why it sells for what it does.  I probably sound really skeptical of any kind of input in this post write-up, since I must have said "take that with a grain of salt" a few times, so it's odd that I even ask, but there had to be a novel story there.  She said that having a close contact in Yunnan was a factor in buying pretty good tea.

As I understand it the rate isn't necessarily the thing; it's being able to find pretty good tea versus pretty mediocre material, lower elevation plantation grown leaves. Both of those tie to local market rate expectations, perhaps not as differentiated by quality level as a factor as one might imagine, although that part is way outside the range of my personal experience.  Old plant source tea not being from plants that are that old might factor in too.  But for as wishy-washy as I am about stating clear opinions I'm pretty sure this is good tea.  Good in relation to my preferences, definitely, but I think the other kind of good too.