About yet another social meetup with an online contact.  I've not met Gundega Silniece before in person, a tea vendor based in Latvia.  It was a very relaxed, free-flowing, and pleasant discussion though, as if she was already a friend. It was great getting to know her better, since we hadn't been in close contact through online discussion, but I'm not going to emphasize that part here.  Let's just say that she is nice.

I want to share more about tea culture in Latvia instead.  I've done a number of local area posts about tea culture in different places, in Russia, Poland, Sweden, even Kazakhstan, with this post covering other writing about those and other places, mostly about us visiting a lot of Asia.  This won't be like those posts, not a more comprehensive glance at a local tea scene, or preferences, just extracts from a conversation about those same themes.

I had considered having Gundega contribute more about her tea business, but she didn't want to use this content as a way to self-promote, to move discussion into more commercial scope.  That's respectable.  And practical; I can't have that much of a Latvian audience.  To check out more background she also has an Instagram account or a local shop sales page.

She did contribute pictures, which I'll mostly add at the end, that tell some of the story, just not more about the context.  Related to this discussion I only had the Zoom-style pictures.  Those didn't turn out as well as screen-capture versions since we experimented with using Teams, the Microsoft version I use for work.  Zoom and Teams are about the same; it wasn't different.

The main interesting part about tea themes there is how hearing bits makes it come across as developed and complex.  I specifically asked her about connection to Russian tea culture, since a lot of the same themes seem to carry over:  an emphasis on both tea and tisanes, an appreciation of Chinese tea culture, and a diverse tea vending theme, which includes a tea club form.  I mean "club" in the sense of a night club, not a cafe, or an interest group, like Tea Masters, which she is also involved in.  That's also an educational institution, and they host competitions; probably all that is familiar to many.

Her answer to that was informative.  They do have different types of cafes and shops there, and also a night-club oriented business.  It doesn't seem as heavily based on the old Chinese social club theme, which in a negative spin resembles former opium dens there, with the version Gundega described more tied to a bar or concert event theme.  How is this possible, one might wonder, that two forms that don't exist in other places can thrive in these two places?  She offered her opinion on that, framed as speculation, not a final answer.

She thought that the form of the local culture in Latvia enabled certain themes or forms of interest to work that wouldn't necessarily work elsewhere.  It had to do with other artistic appreciation, and forms of social gathering.  Fair enough.  Ralph, another member of that group, is familiar with club scenes and outdoor events, and to some extent surely also related subcultures extending beyond Germany. He seconded that there are sub-culture groups and perspectives, tied to Germany and a region further East, that may embrace themes like music, live entertainment and other gatherings, and beverages in novel ways.  It's absolutely not the form they were both talking about (which might not have been the same), but all that reminded me of that catchy old "Techno-Viking" video.

One interesting point Gundega made was that very localized "scenes" in Riga might support different themes, which may not work at all a couple of blocks away.  I definitely don't doubt that. It makes more sense in relation to places I've lived in the US than in Bangkok, where all the areas are a mix of different themes.  That's at least outside the red light districts here, which probably include a narrower band of sub-themes I'm not familiar with.  In the US there can be a clear edge to an area in cities, and a block or two over it's a completely different place.  She made it sound even more locally distinct than that.

To back up a bit, earlier on Gundega explained what general tea preference is like in Latvia.  People drink a lot of tisanes, which is common across Eastern Europe, per my understanding.  Then they also explore a lot of types of better "real tea," which I didn't necessarily expect.  I'm sure the uptake is somewhat limited across a lot of scope (eg. the number of people into Darjeeling, or Japanese green tea), but it's not as if it doesn't come up.  In Russia the grocery-store level of preference and awareness tied mostly to Ceylon, with some blends, and then at the higher end there was a lot of focus on Chinese teas, mostly on sheng and shu pu'er.  Gundega clarified that although there were commonalities with Russian tea culture there really is no direct cultural link; that just relates to common causes, like being nearby, and of course an earlier political association, which doesn't necessarily involve an ongoing connection.

I asked how the pandemic was affecting tea sales and functions, and the answer was exactly what you would expect, one that would apply to most places:  impact was significant, and definitely not positive.  So it goes.  She was upbeat about that, grateful that her life is still working out, even with significant impact in terms of income and normal daily routine experience.  I guess that's as good as most of us can do, take it for what it's worth, and try to see the positive in it, like spending more time with family.

Gundega had met Huyen related to attending a Tea Master's competition event in Vietnam some years ago.  That didn't launch into a lot of shared experience discussion, but it did help us bridge to discussing tea themes there that she had already learned a good bit about.  It was really interesting hearing about detailed uptake of regional tea interests there in Latvia, and a little about her impression of some, and about import issues, just a bit off the topic here of local main forms of tea culture.  We had a nice discussion about the age that children can drink tea, that bridged into her account of children's tea ceremony competitions, held through the Tea Master's organization. 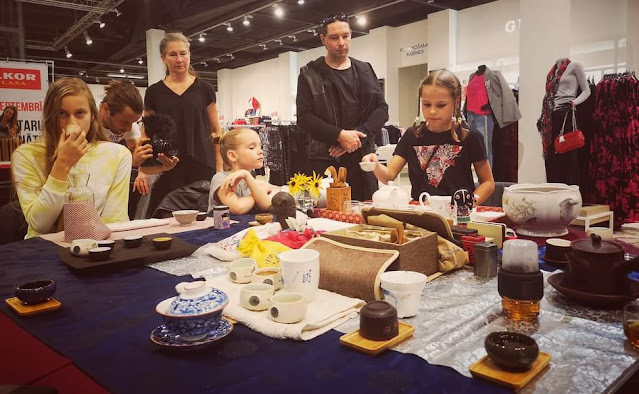 To be clear all this really hasn't done justice to the range of things Gundega is working on, related to selling teas, developing new experience themes related to tea (that club context), Tea Master's participation, or supporting tea tours.  I think we missed a main one entirely in that discussion, about a new European collective organization being developed, or maybe that only came up in a short set of comments about reviewing tea quality issues.  These meetups are more social than about interviewing people joining about such things though, and hearing background about tea in Latvia and some of what she is working on was enough.