Catching a local video blog that included descriptions of a local market visit reminded me to take some extra pictures of a recent stop at one.  Here it's a lot like taking pictures in a grocery store, just not the kind of thing that comes up.  Instead of filling in general background explanation I'll let the pictures and descriptions of what was there tell that story, leaning a bit towards fruits and deserts since those are of interest to me.  We go to grocery stores a lot more often but I like the slightly different selection at local places. 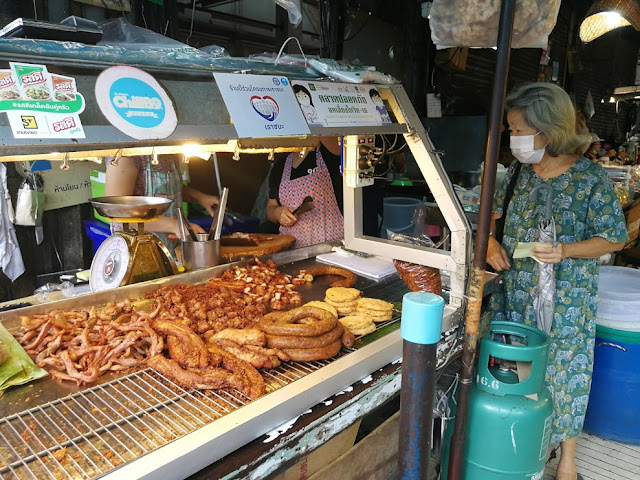 My mother-in-law, Mama Nid, buying a lunch for me, fried pork, Northern-style sausage, and sticky rice (or glutinous rice, if you must).  We normally get fried chicken here but it was sold out.  That sausage form is really nice, dry in texture with a lot of herbs added, and a spicy edge to it. 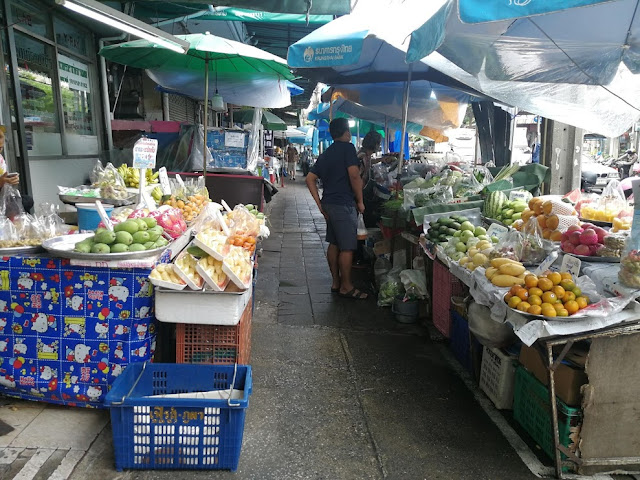 The sidewalk right outside that inner market area, essentially the same place.  The umbrellas protect against the rain in the rainy season and sun in the hot season.  It rained that day, even though it really should be hot and dry now. 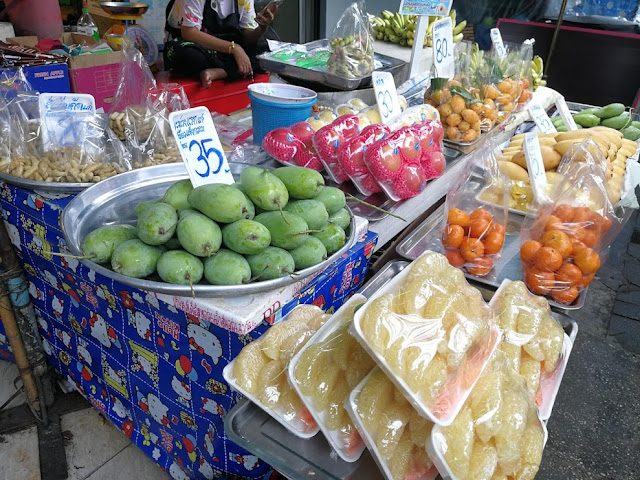 Fruit!  Pomelo or Asian grapefruit is similar but a little different (foreground), with two kinds of mangos, a small version of orange, peanuts (fresh boiled or steamed), apple and Asian pear, and what I think is a hybrid fruit from plum and mango, but that may not be right.  There are a lot of different versions of banana here too. 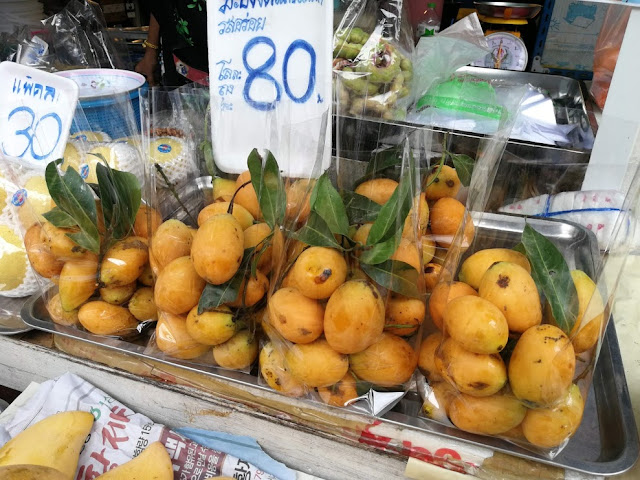 That fruit that looks like a plum and mango hybrid, kind of a rough looking version here, selling for 80 baht ($2.60 or so) per kilogram. 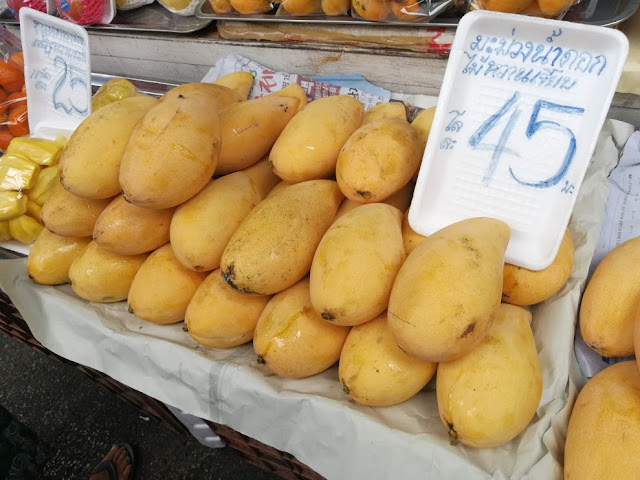 One of the main types of mango, used to make mango and sticky rice.  They're nice but sweetness stands out more than other flavors, with just a bit of citrus to it, so not as interesting as some other versions. 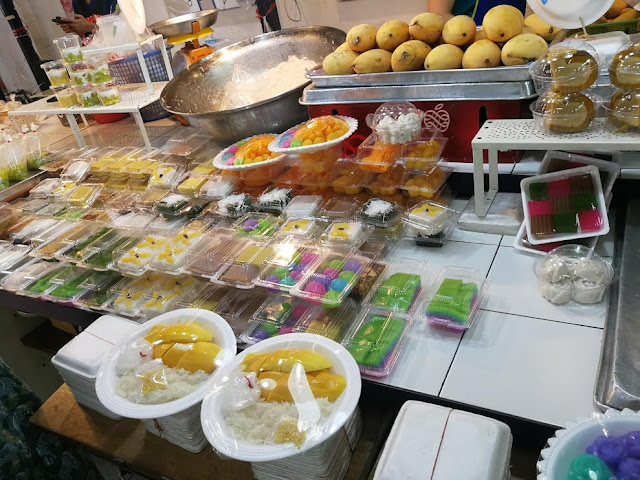 Mango and sticky rice, a version with coconut milk mixed in as it's eaten with mango.  This shop sells different Thai versions of custards too, and the more colorful deserts are coconut based dishes closest to jelly, but not that. 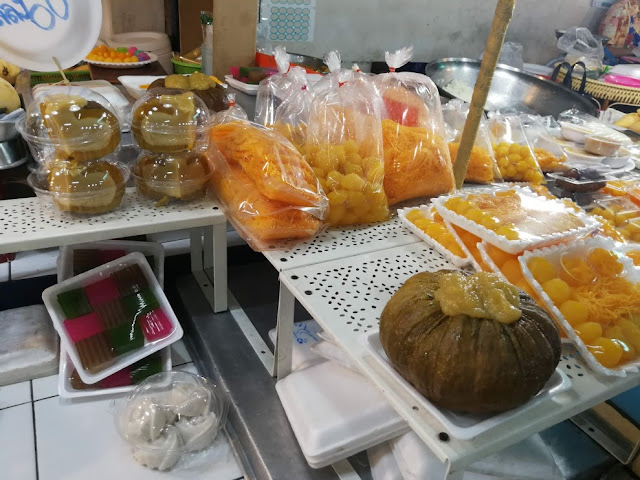 Pumpkin and custard go together a lot better than it sounds.  We bought pumpkin elsewhere, just without custard, which I'll have for lunch today along with corn (sold as fresh-steamed sweet corn still on the cob), sticky rice, and left over pork ribs from that first shop photo.   The yellow items are sweetened shredded coconut and something vaguely like a custard made from coconut, but not that, a sweetened and thickened egg yolk instead. 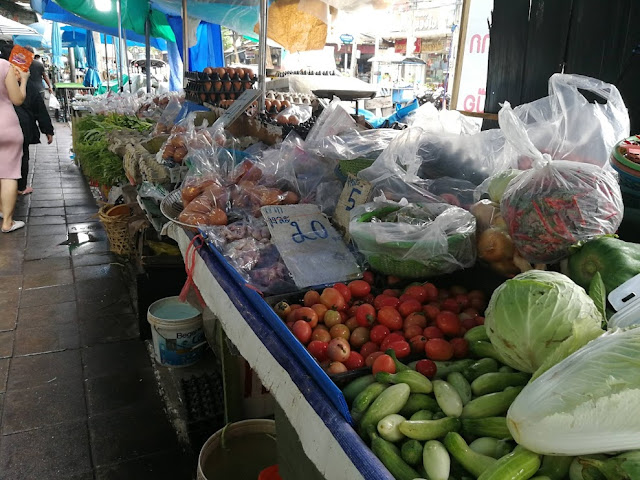 There were vegetables there but even the ones with no US equivalents aren't as interesting as the fruits and snacks. 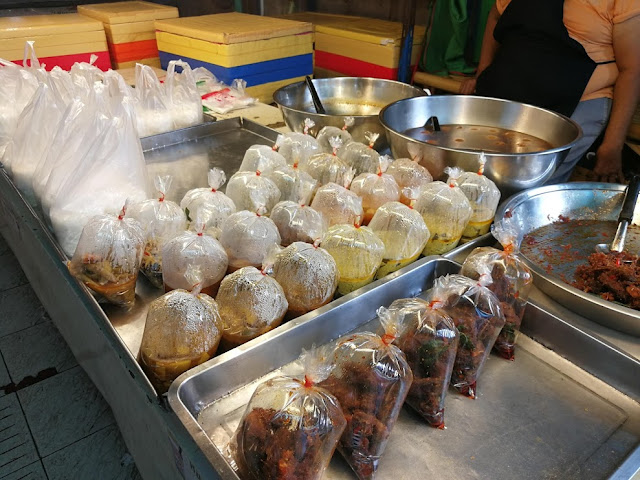 Ready to eat curries and such typically cost about 30 baht, $1, for a small amount like this.  Most dishes are eaten with a plain steamed jasmine rice. 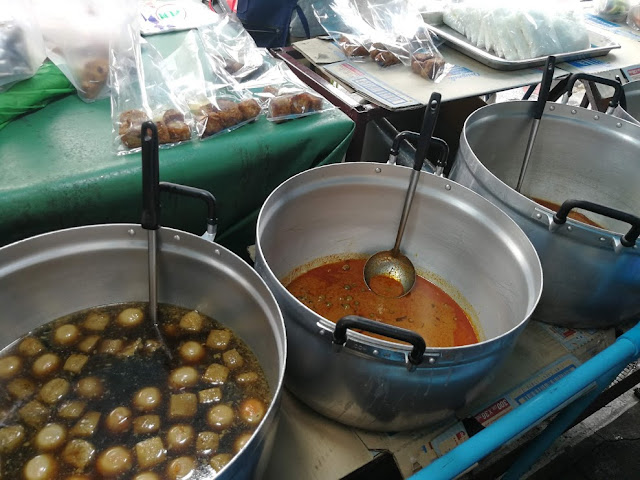 Curries and an egg and tofu dish. 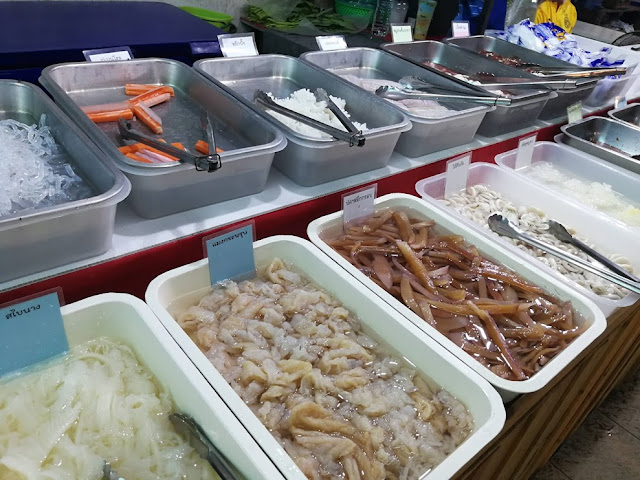 Fresh seafood, sitting out in trays or pans, with ice added to keep it cool. 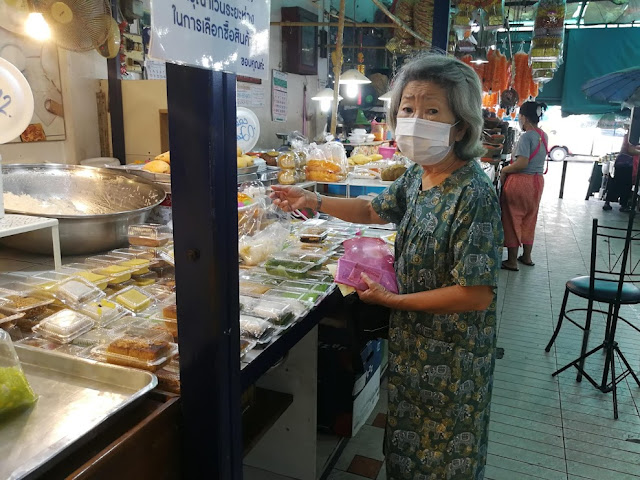 Mama Nid again, buying that sticky rice, to go with mangos we already have at home.  I'm not sure why but no one in my family eats much fruit, except for me.  Kalani eats some. 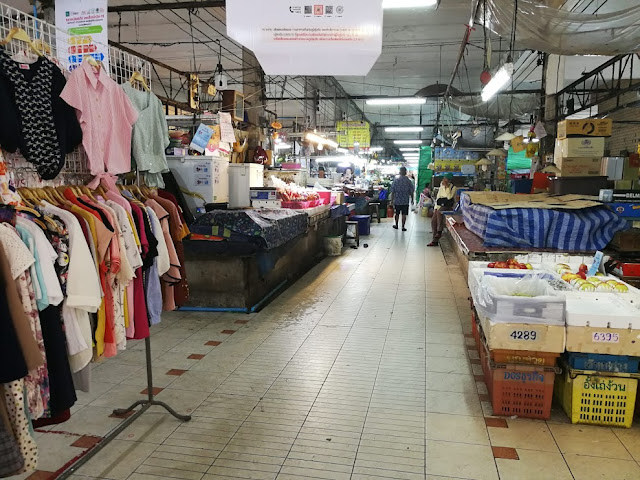 The back part of the market is dry goods instead, clothes and whatever else. 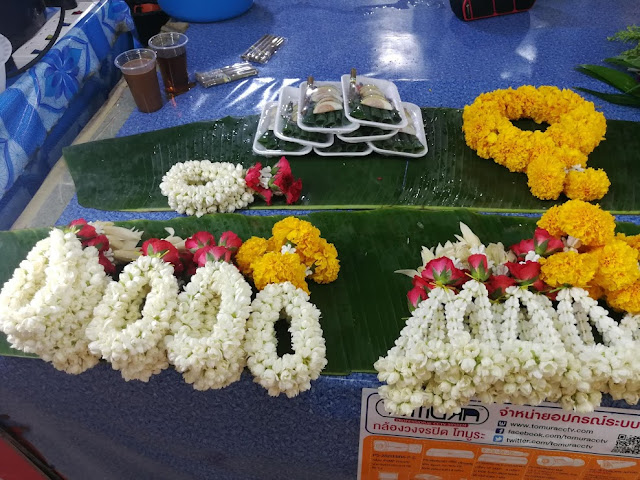 Jasmine wrist leighs, used as offerings to local deities at small altars or else as car air fresheners.  The smell is really intense; I hate being in a taxi that has one of those in it.  One of these would be intense for adding fragrance to a whole house, at a cost of 20 baht or so (60 cents), or maybe only 10, depending on the source and design. 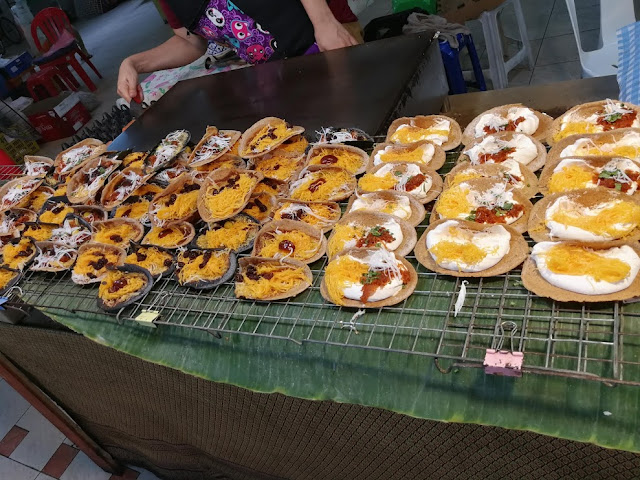 Back to a desert theme; these look like tacos but they're sweet, some with a savory and salty component.  The yellow part is sweetened shredded coconut, and the white part like marshmallow.  They're good.  That blogger I mentioned walked around a market saying how amazing everything was, and then you think really, or is that just him being amazed by the novelty and range?  Thinking it through I think the fruits, vegetables, prepared foods, and deserts are kind of exceptional, so if it's just bias for him it also applies to me. 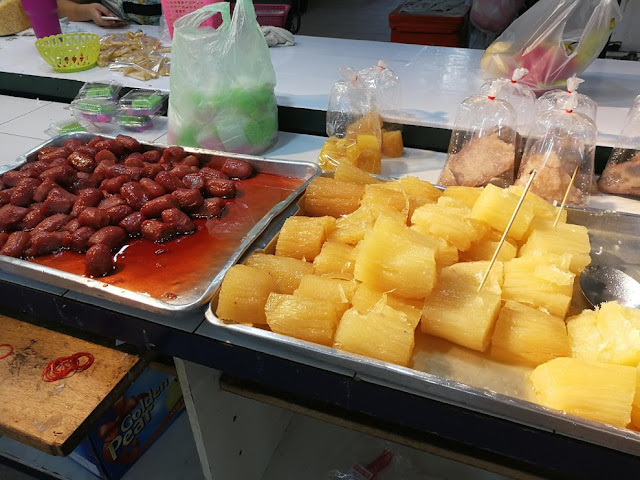 Candied versions of something I don't recognize.  I eat most of the fruits and snacks I've shown, but not these, typically. 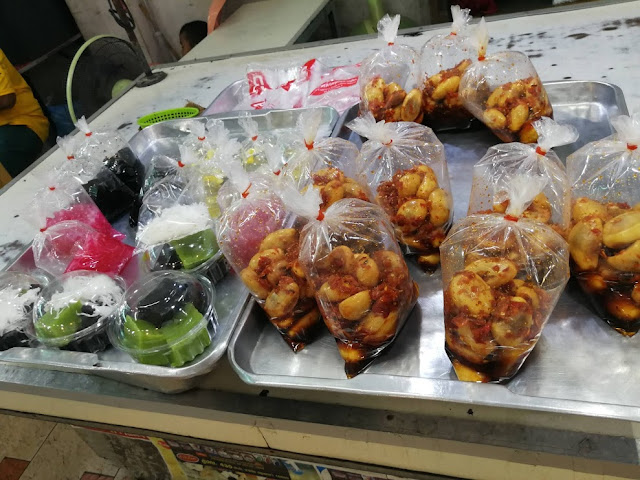 On the strange side, I think this is a liquer-like tasting fruit (salaya?) mixed with pepper, but that's really a guess, since I've never eaten that.  That fruit is nice on it's own, but it's really spiky, so hard to open without getting stabbed.  I didn't see a photo of one but I can look it up from old pictures: 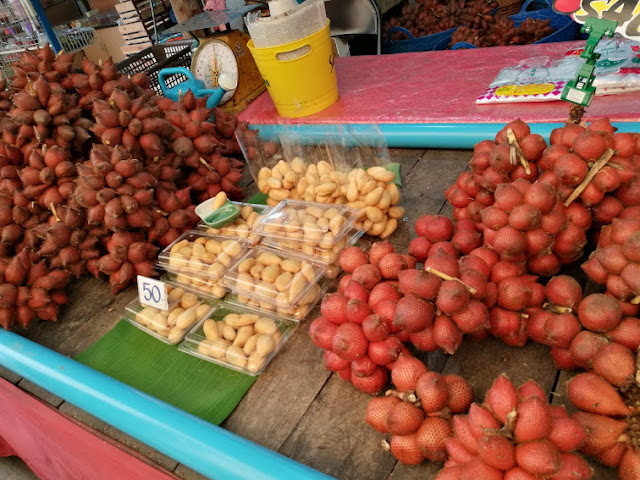 That's it.  It works to use a butter knife and a napkin to open those without pulling the spiked back out of your fingers. 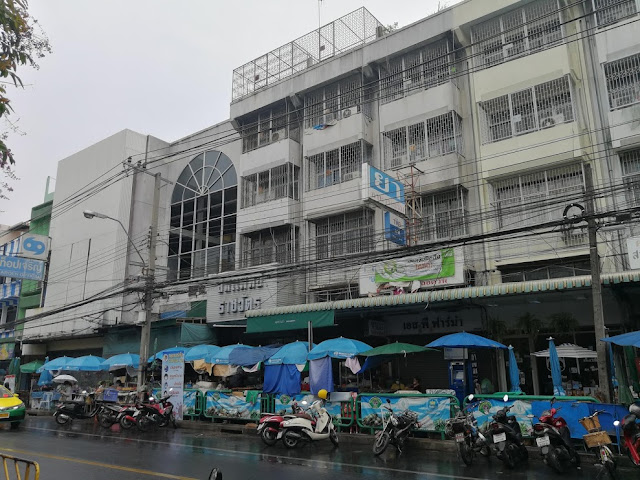 What that market looks like from across the street; we walked over to get noodles at another shop. 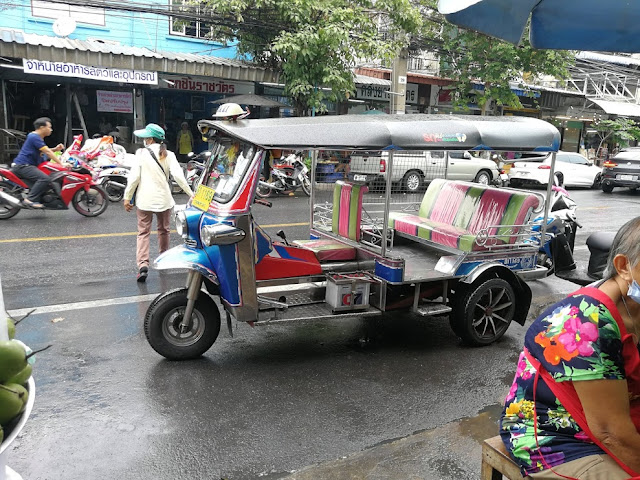 Of course there really are tuk-tuks around. 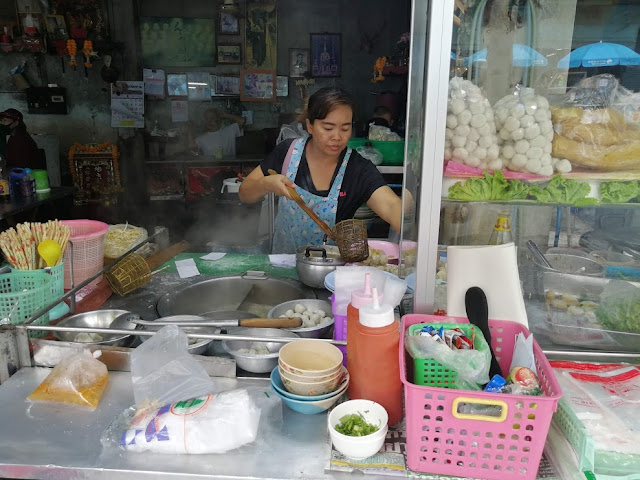 That noodle shop, kind of how those tend to look.  You can pick from a rice-noodle based version thinner than linguine (more or less standard), and thicker and thinner rice noodle versions, and then one or more wheat based noodles, or what they call ma-ma, ramen noodles.  The white balls are usually fish balls, but a pork version looks the same. 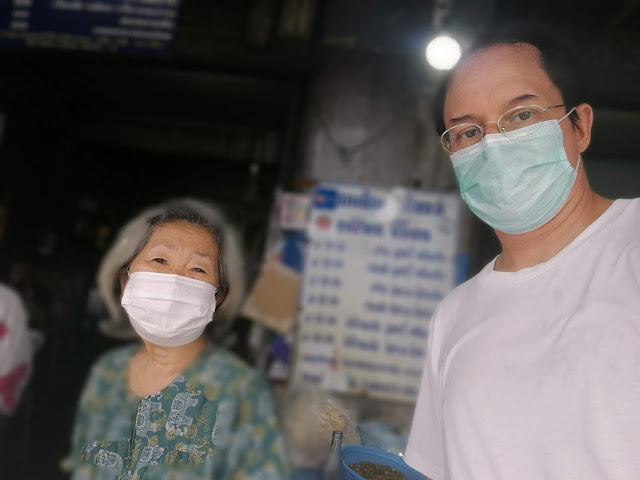 At that shop.  She is so nice that it's great going on that kind of outing with her. 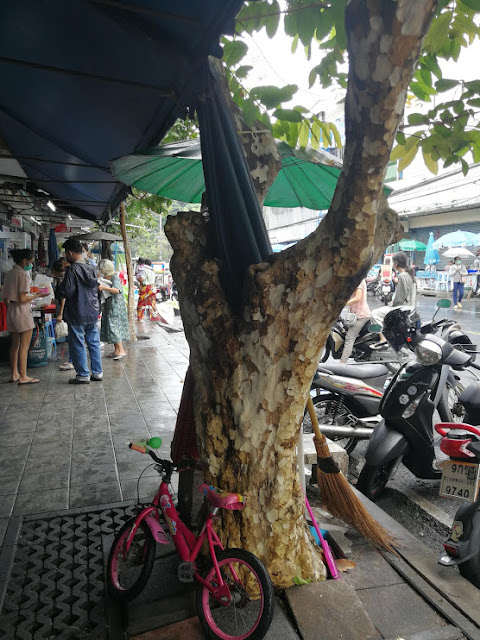 An odd looking tree bark, and a good place to park a small bike. 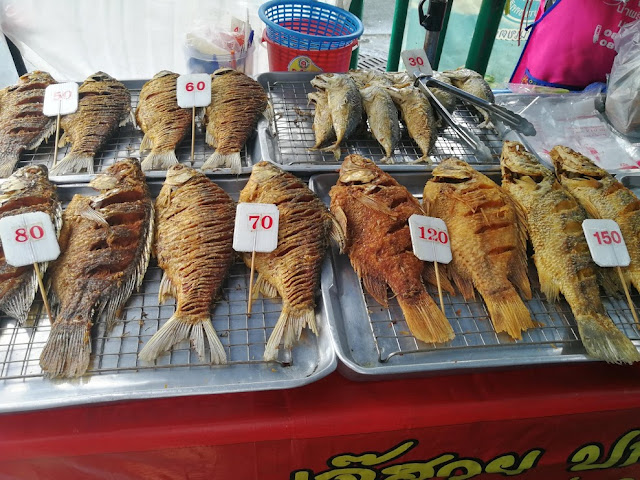 Fried fish being sold on a sidewalk table.  That price range is $1 to $5, converted. 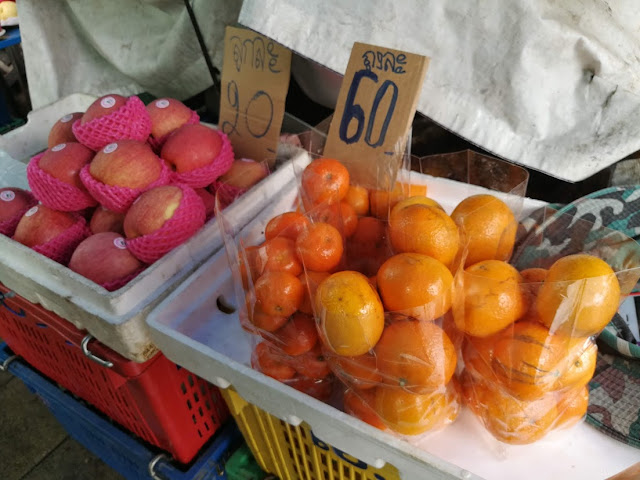 I've been eating a lot of what Americans call Mandarin oranges for weeks, the version on the left, which Thais call Chinese oranges. 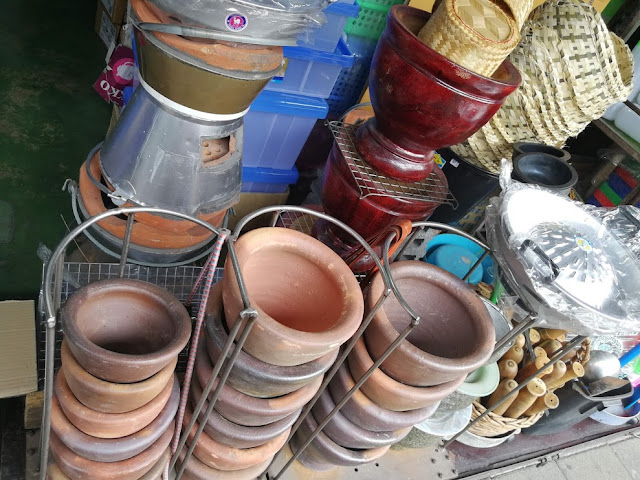 An equivalent to a mortar and pestle, used for mulling spices in Western cooking, is used to make raw papaya salad and other Thai dishes.  The metal item is a Korean style barbecue device (a cheap aluminum version of one); you put burning coals in that and then meat on top, with the rim tray making a broth you can cook vegetables in.  It works really well, or at least thicker steel versions tend to.  The upper left is a version of a charcoal based "stove," I think.  It's not so uncommon to see street food cooking using wood as the fuel. 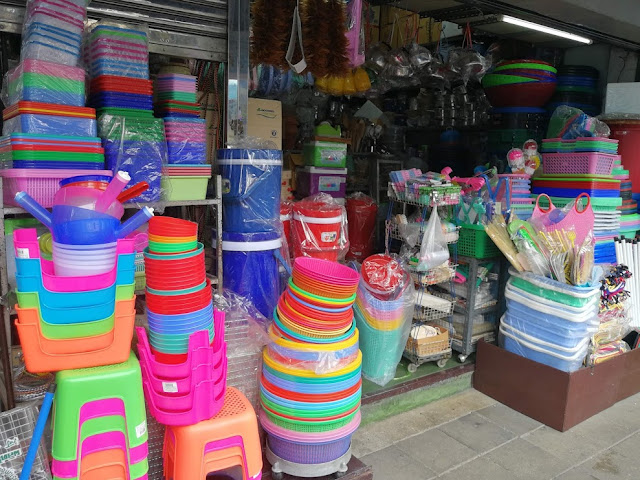 A shop selling a lot of bright plastic pails and tiny stools, and coolers and such. 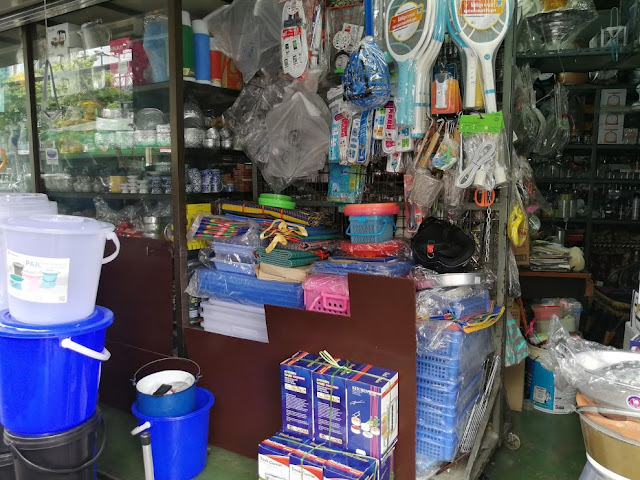 A local shop selling a lot of random stuff, like an old version of a hardware store, kind of, except that most of it isn't hardware.  What looks like tennis racquets are electronic devices that swat and kill mosquitos, like a hand operated bug zapper. 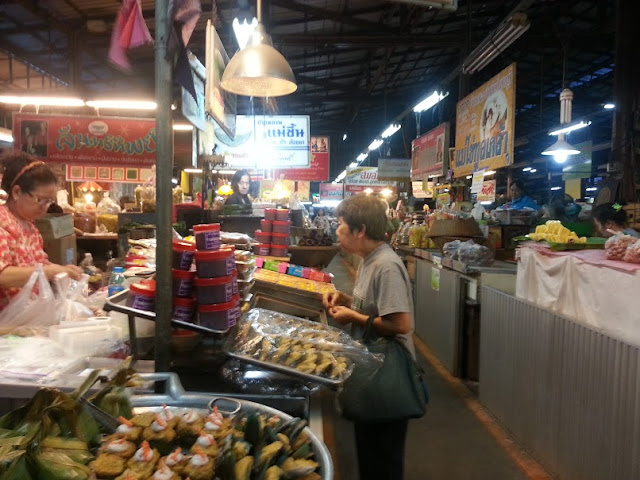 Another way local markets look, a picture I saw looking up one other, here with Mama Nid a few years younger, in shorter hair.  The picture is too blurry to really make it out but the foreground is a mix of meat paste cooked into a form not familiar in Western food, served in banana leaf.  It's good, just hard to describe.

When I first arrived here the smell in those sorts of markets was really intense, both positive and negative, but hard to take.  Now I tend to not notice any smell, since it's all just normal background.  Wearing a mask must counter some of that too.