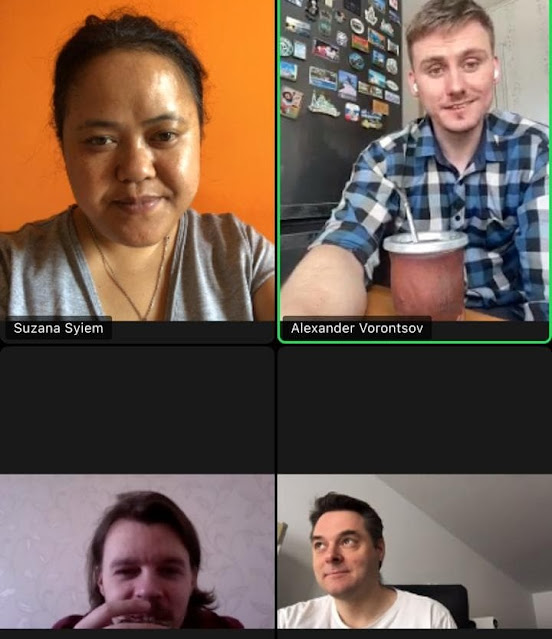 It was hard to know how to put this title summary, since "enthusiasts" really doesn't capture the level of developed input these two tea contacts are able to pass on, but they both seem a bit plain-spoken to take up this form of implied experience claim.  One is Alexander Zhiryakov, the main founder of Laos Tea, and the other Alexander Vorontsov, a main founder of the Russian Tea Lovers enthusiast group.  Both might take tea interest a bit further than I do, at least in two different senses.  Adding commercial tie-ins is a change in interest form, and the Russian Tea Lovers, which I think both Alexanders are associated with, really take exploration seriously.

I've met both before, for which I'm very grateful.  A chance online contact with Dasha Birukova led to her inviting me to a tasting at a Moscow bookstore on a visit there, which was very pleasant.  It was a chance to meet Alexander Zhiryakov and great exposure to a form of Laos tea and local culture.  I think I started talking to Alexander Vorontsov not so long after that, surely tied to posting about Russian tea themes, and we met here in Bangkok when he visited later.  He helped me write a post about tea culture in Russia, which mentioned that Moscow bookstore tasting.


I'm a fan of Russian culture and their tea culture.  And of lots of places and cultures, moving on to really appreciate varying outlooks on life in general, but it's nice how it all plays out related to tea there.  The tradition runs a bit deeper than in most places, including here in Thailand.  Although the most mainstream form there now relates to Ceylon appreciation local tea enthusiasts are focused almost exclusively on Chinese teas, probably mostly on pu'er.  Tea clubs are a novel theme there, like a cafe but different in form.  I'll add a little introduction of both participants along with more on that.

We talked most with Alexander Zhirayakov about a new project to test teas and set up a "passport" or profile of them based on testing, a "Tea ID" project.  The idea is novel, to gain extra function from conventional screening of what is negative (pesticides and such) along with clarifying origin and, if possible, quality level through still-under-development use of specific identifying markers.  It may be possible to take some of the burden off supply chain tracking and direct-from-origin information streams by verifying a lot that simply can't be identified through testing now.  You can imagine how lots of tangents come up in just considering such a possibility:  how would that be possible, what other function or purpose could be added, and what limitations or other cultural considerations might support or block such development?

Alexander Vorontsov helped summarize a bit on local tea culture in Russia, a subject I thought my friends would also find fascinating.  That naturally moved from an overview starting point to considering which teas were focused on most, and how quality issues and sourcing relate to differing forms of local tea interest.  It's hard to really get evolution of local ceremonial aspects integrated in a short discussion; talk of connections or lack of exposure with varying tea origin areas, supplier issues, and other background naturally comes first.  He did pass on a bit about the tea clubs, just not much about their tea enthusiast group development, which we just didn't get to.

It's hard to condense the broad range of both discussion scopes to simple take-aways.  Covering personal likes and practices helps fill in more of a broad background, but those really don't lead to distinct summary.  That's what local tea culture is though, shared appreciation, and the sum total of lots of individual experience preferences.  A couple of hours only goes so far in mapping it all out, and covering personal introductions.  Maybe a backwards approach, explaining what we missed, will help fill in what was covered.

Laos tea:  for focusing so much on that interesting testing direction we really didn't get far in discussing tea from Laos.  It's a shame, because two hours isn't a lot of time to do justice to only that, but that testing project was worth the focus.  This meetup group has now talked to the two people probably most involved with Laos tea production and promotion in the world, with Anna as the other, and barely got into which tea types are now made in Laos.  I know the answer to that, based on trying dozens of individual versions; I should write about it in a summary post.  Or we could get Somnuc Anousinh (mentioned here, here, and here) to meet online sometime and focus on that.  That one black tea, the first "here," is one of the best versions of black teas I've tried, per my preference; a bit rustic in style but just fantastic, really basic but deeply appealing as Dian Hong can be.

Or in the meantime Alexander wrote a good bit and shared photos on that background here.

Vietnamese tea, Huyen's input:  it's hard to get 4 people a balanced proportion of time to cover where they stand on a discussion topic, and completely impossible for 6.  Alexander Vorontsov mentioned that he lacked significant exposure to better Vietnamese tea but we never really filled in what that range is, even in summary discussion.  To me Vietnamese tea is the best and most diverse in South-East Asia too, unless one considers Taiwan part of that set, and then probably second.  Laos is at a cool place for building on very old roots in novel directions, and countries like Thailand and Indonesia have been doing that for longer (in the modern forms, at least), but Vietnam's tea production development is far more mature.  Not really so much compared to China, but then that's true of everywhere else too, to me even in comparison with Japan.

Tea production in India, Russia, and Georgia:  we actually did discuss a bit about all three of these origins, but surely left out far more than was covered.  It would be nice to get back to all that in follow-up.  The tricky part about discussing regional development, and personal preference, is that a main sub-theme about quality levels never completely drops out, and also never becomes completely clear.  Sheng "pu'er" from Laos and Vietnam (and Thailand, and elsewhere) can be varied in character, quite positive, and maybe a bit variable across a lot of aspect range, not dialed in to the narrower character expected and valued from Yunnan.  That's also an oversimplification, since Yunnan sheng varies a lot, not only related to origin and style conventions, and quality level, but across lots of range.  The same problem comes up everywhere, talking about differing but overlapping subjects related to tea types, styles, and quality levels.

Samovar brewing:  mentioned in closing, Alexander Vorontsov said that in a future session he could go through what this is all about.  I've only tried tea--mixed with herbs--brewed in a samovar once. That was one of the more interesting experiences of my life, related in part to the context, visiting a dogsled racing camp in the Arctic region in Murmansk, Russia. 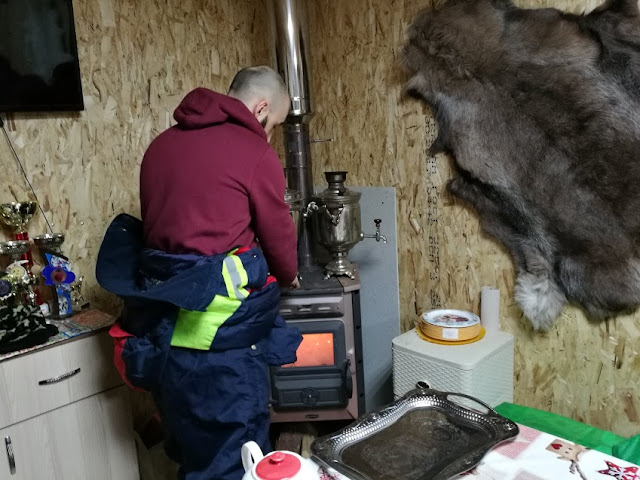 No doubt Alexander has lots to add beyond what I experienced through that cup of tea.  It goes without saying that the Russian Tea Lovers sessions would mostly use clay pots for brewing, maybe only setting those aside to use a gaiwan, if that seemed relevant.  Or so I would assume; we really didn't discuss anyone's preferences in much detail, related to when or for which types Western brewing might make sense.  Alexander (Vorontsov) was drinking mate from a related device during that meeting, and other kinds of exceptions must come up.

There isn't much in here about what Huyen, Suzana, Ralph or I thought of any tea theme.  For having two guests this time we stuck more strictly to focus on their input on tea themes.  And that input and discussion was great; all of us really appreciated it.