It feels a little like I've written about this before, in considering a tea enthusiast quitting tea in this 2016 post.  Looking back that was about pros and cons of a developed tea habit, about caffeine concerns and expense, with only a little on exploration playing out a natural course.  My favorite tea blog author just gave up blogging, Geoffrey Norman of Steep Stories, making it a good time to revisit that theme.  To add context, his current blog page is 10 years old, but he had been doing tea reviews and writing in different forms before that.

In between that earlier post on a tea interest lifecycle, in the past five years, I've written a lot more than I ever had prior.  I switched from mostly oolongs and some black tea to mostly sheng pu'er.  Maybe more relevant, over the last year I've questioned why I keep writing, for many of the same reasons Geoffrey mentioned in that final sign-off post.  It just gets old, writing similar thoughts over and over, and even covering new tea-range exploration feels like repetition.  In general the audience shrinks as platforms like Instagram draw more attention, with pictures with moderate caption text easier to browse through than reading text.  Facebook now focuses more on showing people ads than private blog link posts.  I could pretty much end this post there; all that is the crux of it.

But of course I can say more.  There would always be ways to add new dimensions to a long-standing interest that you aren't completely burned out on (tea scope, not just tea writing).  Geoffrey mentioned that he will dabble more in making related videos, and he has been making memes about tea for awhile.  Last year I was part of a small social circle / meetup group related to tea interest, along with three friends, and this year we extended that to talking to a number of tea specialists.  I should summarize how that has went here in a post, beyond posts covering individual details, since we didn't broadcast or edit and publish that video.  Even that series sort of felt like it ran its shorter course, since it was hard to set those meetings up, and it worked better as a late covid wave replacement for other social contact, with the pandemic finally easing up a bit now. 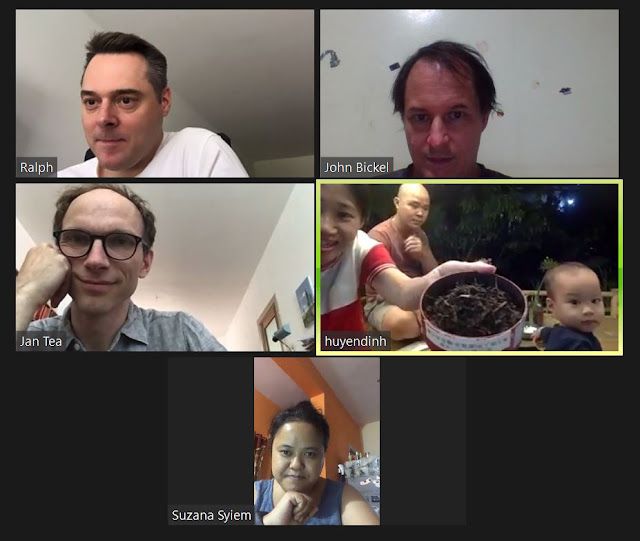 Long ago I started taking tea more seriously than would be typical for a beverage interest, and to some extent it's that part that isn't sustainable.  Learning and experiencing new things has been great, and making contacts, even friends, but it would help if it felt like it was leading somewhere.

This is probably a good place to explain why I even started:  about a decade ago I started exploring social media more and used tea as a subject theme as a basis for that.  Just joining Twitter might be interesting, but connecting Twitter to a subject interest makes sense, not that I ended up liking Twitter.  The same applies for writing a blog, trying out joining and then co-founding a Facebook group (this one), starting a Quora Space, and so on.  A new form for social media channel interaction hasn't clicked in awhile, beyond the meetups.  And it's a little harder to keep learning now, having already encountered so many ideas.

I'm writing more about other subjects, an activity that isn't new, but that I've only started including in my tea blog over the last year or so.  I guess that started here:  Calhoun's Universe 25 mice experiments; overpopulation effects related to modern social themes.  It's uncertain that this is the "writing on the wall" for quitting blogging about tea; maybe balancing different interests would work well.  Since then I've written about foreigner / expat perspectives on culture in China, Dissociative Identity Disorder (the multiple personality theme), on how social media groups define and reinforce perspectives as distinct subcultures, and on Buddhism as it relates to rejection of a real internal self.

None of this really relates to any broad movement in tea culture or awareness.  It's not that I think the subject itself loses steam, or ceases to renew cycles of discussion.  It just seems natural to only talk about an interest like tea for so long, and then to just drink it.  As one Tea Chat forum veteran said he felt "tead out" after awhile, or to paraphrase Alan Watts (about another subject) after you get the message it's time to hang up the phone.

But then I don't see my own interests, goals, or experiences as the boundary of what I communicate or discuss, or else I wouldn't have stuck with it for this long.  Helping others can be pleasant.  Even then declining interest in text content definitely offsets that as a motivation for writing a blog.  It doesn't matter if 50 or 500 people read posts, but at some lower threshold it somehow seems to make less sense.

I'll probably keep writing, and slow down review pace, and keep diversifying themes.  Asian culture  has been a longstanding interest, related to living in Bangkok for 14 years, and I've not really said as much as I might have about how perspectives are similar or different, which should eventually tie back to tea.  Not in blogs at least, but I did also start a second Quora Space about that.  Other things could come up too, interactions or tangents.  I met with tea producers from five different countries this past weekend to talk about industry perspective and some processing background; things like that.