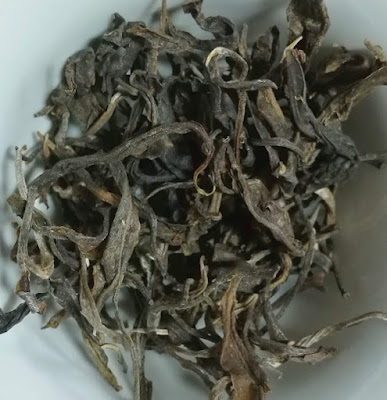 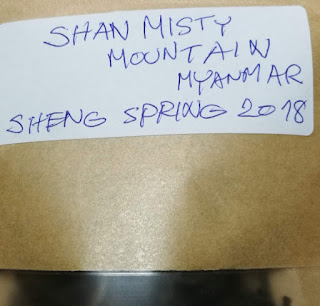 This is another tea sample from Noppadol Ariyakrua, the Lamphang Tea vendor who helped me with that tea tasting a couple weeks back.  The Northern Thai local sheng version he passed on for review was really nice, and the Thai Moonlight White was especially pleasant and interesting to me, so I was really looking forward to this one.


Noppadol lists other teas in different ranges on this separate Exotic Teas Thailand page, so far only posted in Thai language.


For my preference that Thai sheng was very nice, but then a Myanmar based version adds that location theme as interesting context, even beyond different teas expressing different aspects.


I've only had a little sheng from Myanmar and what I did try was really nice.  Individual styles of sheng vary a lot though, even within narrow locations, based on leaf sources and processing differences.  For this being a Spring 2018 sample storage and aging differences kind of drop out; this barely had time to rest a little from being made.


The taste is bright, fresh, and intense.  There's a good bit of mineral, and some astringency and bitterness, but very pleasant floral tones also stand out.  It would almost be a shame to let this tea age, to trade off some of that intensity for a softer character.  Of course I'd have been saying the opposite a year or two ago, that this tea really could use a couple of years to soften up and swap out some bitterness for other range.  It's not that I was more right either time, preference can just vary with acclimation.


I went slightly longer on the second infusion for snapping a couple pictures and the tea is still in a good range--brewed for not much over 10 seconds--but even lighter is better.  Mineral ramps up for being brewed stronger, coming across as a hint of smoke. I usually don't like smoky sheng but at this level it works. 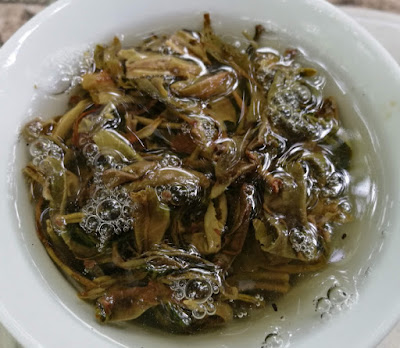 For more taste description I'd need to fill in which flowers are in the floral part, or which rocks for minerals.  But I'm drawing a blank, so I'll move on to feel and aftertaste.  The fullness feel of the tea is nice but not overly pronounced related to where in your mouth that occurs.  It's general, also relating to a hint of dryness.


Bitterness picked up along with astringency for being that bit stronger, and both trail nicely into a sweetness aftertaste.  The mineral really hangs in there, an aspect that reminds me of tastes from drinking from an artesian well.

A faster 5 second infusion the next round is perfect: plenty intense and well balanced.  There is substantial bitterness but per my expectations and preference the sweetness, floral flavor, and mineral tones balances that.  The next infusion is about the same; I'll leave off related to describing transitions.


I could compare this from memory with that Thai version, or reach further back in recollection to lots of profiles for Yunnan area shengs, or similar teas from Vietnam.  The overall balance of aspects that tend to come up often shifts a little more than anything else, or intensity is different.  Mineral tone is pronounced in this, and that hint of what seems to be a natural smoke aspect is novel; usually sheng I've tried seem to be decently smoky or not at all.  It all works.  With another year or two of aging it would work well in a slightly different way, I'd expect. 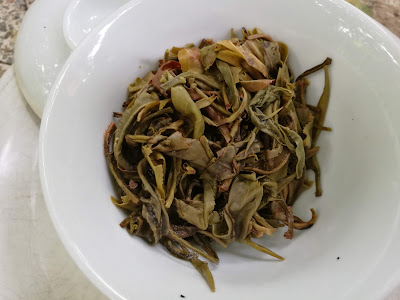 Later conclusions, and about another local tea tasting


Kind of brief, all that, but probably better to not add any more to it.  I really liked the tea.  I'd expect it has plenty of bitterness and astringency to transition nicely into pronounced warmer and softer flavors over a few years, or to hold up to a lot of transition over a longer time.  The Thai sheng version from Noppadol might have been a little more "easy drinking," sweeter and slightly more approachable in those regards, but both were still nice, to me.  I wouldn't consider either to be in the most oolong-preference-friendly style some shengs follow, but maybe the Thai version falls a little closer to that.


Since I did actually keep this short I might mention I'm thinking of holding another public tea tasting, this time in the local Dusit Zoo.  The tentative time is from 10 to noon on Saturday, August 18th.

That zoo is closing at the end of this month, after being there for 80 years.  It's especially impressive for being a former Royal nature preserve before that, so a lot of the trees in that place probably are hundreds of years old.  I don't know of anywhere remotely like that in Bangkok, and I'll be sad to not have a chance to visit it anymore after the next three weeks.  Animals being kept in captivity is sort of a different related theme, not all positive, but to me that was never the main draw for visiting there.

The food court seating area there is just perfect for such a thing, very comfortable, with a great look and feel, and easy access to power for heating water and lots of seating.  You'd think that zoo might be busy due to the closing but I'm guessing it won't be, not even for lunch, since the news of the closure only reached me due to being a regular visitor (although it was in a local newspaper).  To the rest of Bangkok they'll probably just notice later that their local zoo isn't there anymore. 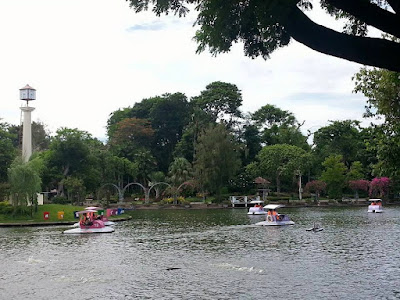 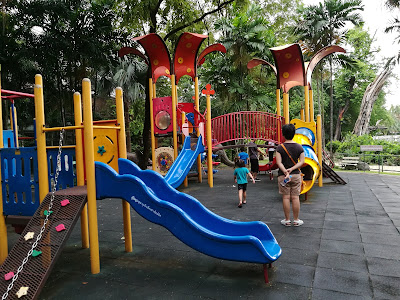 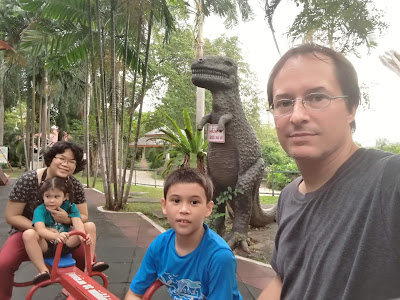 That last video indirectly captures why I'll miss that place so much, for the same reason my wife will.  I saw my kids grow up there.  That video is from December of 2012, when he had just turned 4.  We will keep making nice memories in different places but you can't replace that sort of connection, our favorite place for him to visit when he was young, where Kalani grew up too.  My wife always lived close to that zoo so she remembers going there with her father, probably some of her fondest memories of him since he died when she was a child.

There's still time to stock up a few more memories from there, but only three weeks.