This post was originally submitted to the TChing site, published in two parts with the second here.

I recently talked with Narendra Kumar Gurung about tea production in Nepal.  He has a limited history of working within that industry, following a much longer family history of growing tea.

His latest venture is to move on from growing tea and having it processed locally to conducting the processing on his own, by setting up a small processing center.  These are themes I've been discussing with others related to Assam lately, about trends in farmers and other entrepreneurs ramping up local processing and distribution skills.  There are several related goals:  to add more value to their contribution, to make better finished products, and to support more local employment and the local economy through such ventures.

This will work as a two-part series, since he has just completed a round of production that this interview won't cover, with more on how it worked out to follow.  The background of history of tea production in Nepal and where the industry stands now are interesting, described in the following.

The success of these kinds of ventures is important to resolving some of the economic development, sustainability, and tea production workers poverty alleviation issues.  This can be carried out through pushing production, value addition, and increased revenue to a more local level.  That's my interpretation, anyway.  The history and current status tell more of the story, from this small producer's perspective.  This content is in his own words, only edited slightly to adjust form.

1.  Could you share a little background about yourself and the family history of growing tea?  Why was there a prohibition against growing tea in Nepal at one point?

I am retired from the Japan International Cooperation Agency (JICA) in Nepal after working for 20 years [with more on that development related agency here].  I have been involved with the family tea farming since 2016. My late grandfather Ranabir Gurung had started tea farming in the 1920s while Nepal was under the oligarchic Rana's regime, when Nepal was not open to the outside world. Ran Bir Gurung used to visit Darjeeling, Silguri, and Kolkata to purchase the materials for the construction of two suspension bridges in 1930, which he covered the cost of himself, over two rivers, the Maikhola and Puwa Mai of Ilam district of Nepal.

The history mentions that in Darjeeling the tea plantations started in 1847.  About 10 to 15 years later the district magistrate of Ilam Mr. Gajaraj Singh Thapa (son in law of Rana) developed the Ilam tea garden, based on growing Chinese plant varieties.  But under the oligarchic of Rana regime tea cultivation was not allowed at the farmers level. It is said in our family that District Magistrate sent some army staff to uproot the tea saplings planted, around .025 hectare, and we can still see 10-15 bushes abound our house in Ilam which were left only for our domestic consumption. He had also purchased some shares of Palashbari Tea garden, D. West Bengal 735202, which lies in the bordering areas of Bhutan and doors in Darjeeling.

It was only after 57 years of Ranbir Gurung’s endeavors in tea cultivation, that his son (my father) Man Bahadur Gurung (85 yrs.) started the tea plantation in 1980s, which had been developed to 6 hectares as of 2000. Man Bahadur Gurung had established the tea factory in joint venture with the Vaidhya groups of Nepal.  This was one of the first of its kind in this locality that benefited numbers of tea farmers in the vicinity by allowing them to sell their green leaves locally. The basic infrastructure for tea factories (transportation and electricity) in this locality was not well developed at that time.  The situation was not congenial to operating a factory, so Man Bahadur Gurung withdrew his share from the factory sometime in 2008.

Thus, after 18 years, once again grandson of Ranbir Gurung, Narendra Kumar Gurung (myself) has ventured to establish small scale tea factory that process green leaves from our own garden and tea farmers from the surrounding areas.

2. To what extent has the specialty or higher quality tea industry in Nepal changed in the recent past?

There is growing trend of establishing small-scale tea processing plants, in the last ten years. About 110 mini factories are already established, with the capacity ranging from 3000 to 50,000 kilograms of processed tea per year.  These are mostly owned by tea farmers and tea farmers’ cooperatives. In these mini processing plants it is much easier to control the quality of tea produced since the green leaves are obtained from their own gardens and there is strong sense of ownership.  Subsequently the quality of produced teas is much higher. There is encouragement and a sense of competition among factory owners to make different kinds of the best specialty teas.

Beside the affordability to start this mini plant, another factor is the relatively lower scale of investment required compared to the traditional large scale of tea manufacturing plants.


3. In what way has the market for higher quality teas there changed?  How are most teas produced in Nepal sold, and to what country?

The medium and large size factory owners buy green leaves and produce in large quantity, without caring so much about the quality, and those finished teas are sold to Kolkata auction market.  The products are often subsequently sold as Darjeeling tea, misrepresented as being from a different location.

But with the introduction of Chinese mini processing plants, there is a growing trend of producing the specialty teas (white, gold, silver needle, oolong, and green tea).  Producers are more often more connected with the garden owners, with these small operations continually developing increasing skills of tea craftsmanship. Most of these teas are sold to European countries, to Korea, Japan and the US through personal connections. There is not much domestic consumption for these types of specialty teas except for Chinese tourists buying them as gift items.


4. Related to discussing tea plants, can you say a little about what types of tea you grow (var. Assamica versus Sinensis, local plant types or hybrids)?

Almost all teas that we grow here in Nepal originated from Chinese and Assamica varieties propagated through seeds. Only few varieties are from Cambodia. There are a numbers of lines developed based on Chinese and Assamica varieties from Darjeeling’s different gardens, imported through different channels. The hill areas where my garden exists, at an elevation of 1514 meters, produce only orthodox teas based on Chinese origin teas. 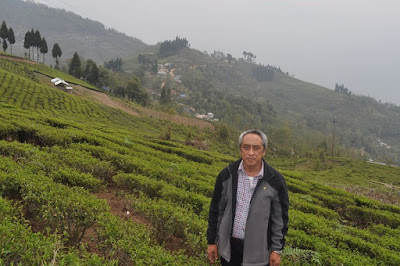 5. Can you describe more specifics about tea processing techniques you are familiar with, and where they originate from?

The tea processing technique and sequence that we follow is quite traditional, as in other places:  (1) plucking, (2) withering (3) rolling (4) fermentation (oxidation) (5) drying (6) sorting and grading and  (7) packing.

Right after my retirement from JICA in March 2016, I had an opportunity to attend training entitled, “2016 Seminar on Pollution free, Tea production Technology for Developing countries,’’ organized by Zhengzhou college of Science & Technology, Zhengzhou Fijian province of China, from April to June 19 in 2016.  This short course was an eye opener for me, encouraging me to develop the processing of tea from my garden and neighborhood farmers. I also realized that Nepal’s experiences on tea at the farmers level is just at the embryonic stage while China has more than 5000 years of tea culture and tradition.


6. Is there a tradition of local Nepalese tea processing and related techniques, and tea products and types?

Tea culture is rather new in Nepalese societies.  Although at the state level the gardens were developed in 1863, that production remained only within the government scope. Only in 1971 under the out-growers schemes of the Nepal Tea Development Corporation did tea plantation production start at the farmers' level. Taking tea as local beverage also has a similar history, only consumed in the eastern part of Nepal like Ilam.  This is perhaps due to those areas adjoining to the Darjeeling area. But now gradually the milk teas (based on CTC versions) are getting popular all throughout the country.

The teas that you had mentioned trying (golden black teas, and silver needle) are very new development products, perhaps being developed only in the last ten years. The taste, aroma, and quality of Nepalese teas as whole being so different from many other teas of the world is due to the high elevation, climate with mist, monsoon rain, and quite congenial weather of Ilam, the Eastern district of Nepal.

If we just gauge the tea history of Nepal at the farmers’ level, both garden management and tea manufacturing, 45 and 25 years respectively, there have been significant leaps made.  Surely there are lots of areas of improvement to come in terms of improving quality and efficiency. One of the major challenges the Nepalese tea entrepreneurs face are the marketing of their products, along with further developing processing skills and knowhow.

As we go forward there could be lots of interaction among the tea entrepreneurs, marketers and tea consumers at the global level, while Nepalese producers at different scales of production volume further develop their craftsmanship.

My company, Highlanders Farmers Private Limited, has supported about ten (10) tea laborers through out the years in plucking, bush management and so on. One manager is fully involved to manufacture the produced tea into different types and quality levels.  There are six tea farmers within the radius of one and half kilometers from my garden who will provide their green leaves for processing in my small plant.


Again this is only part one.  Actual finished teas have been produced over the last month or two at his small start-up facility, as a first step on this new venture that was described.  A second chapter that includes a review of finished teas will add more about where things stand, and about next steps in this development.  Narendra hopes to explore more direct sales overseas, which I will say more about along with reviewing those teas in this blog.