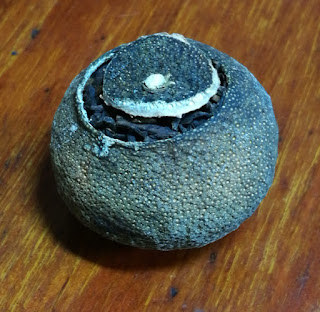 I'm finally getting around to trying one of those tea stuffed oranges I bought in K. Muiktee tea shop in Chinatown around three weeks ago (about that visit and a local market area there).  I bought both a shou pu'er and bai mu dan version, and am going with the shou this time.  Not that long ago I had tried my first tea-stuffed orange, a black tea version from the Jip Eu shop (which isn't exactly listed on their FB page). 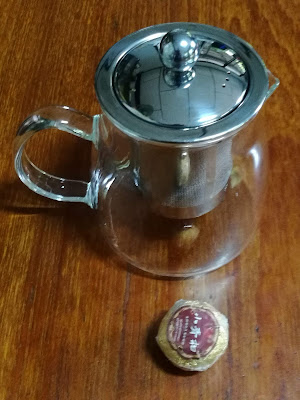 I just did a group tea tasting yesterday (at time of taking notes) and it will be nice to take a break from brewing tea, or even trying to taste it at the same level of detail as those Gongfu brewing reviews work out.


It looks dark, with just enough light grey that it makes you wonder if it's even a good idea to drink it.  I'm guessing that there is enough mold on this orange that toxins are also present.  I really should have at least rinsed it, but didn't really consider that until mid-way through the first infusion.  I'll surely live; all that relates to long term exposure and risk.


It reminds me of seeing a comment in a tea discussion recently about how there can't be toxins in tea because it never made that person sick.  I don't think it works like that, like food poisoning.  I'd expect the risk is closer to how lead poisoning contamination works instead; it might get to you over time.  Or I've seen pictures of versions that look exactly like this online; maybe it should like that.


It tastes less like citrus than I expected in the first round.  That citrus stuffed black tea from Jip Eu was just that for the first two infusions, a bright, sweet version of dried orange peel.  It also didn't look black or grey; it had dried and preserved differently.  But then I was also using a Gongfu brewing approach with that, which sort of seemed not to make as much sense as throwing it in a pot for  minutes, even while I was doing it.  Sometimes I feel like the extra messing around.

It doesn't really taste that much like shou either, more just a mix of flavor range.  It's earthy, of course with some citrus.  The flavors are a bit non-distinct; they mix.  For that they seem cleaner than I'd expect.  Stones and earth come across, or as someone mentioned in a tasting about shou not so long ago that twigs and bark did.  So I guess I'm "getting forest floor," to dress that description up a bit.  And a dark wood.  The citrus may come across more next round, but then the orange peel hadn't opened up much in that first round.  I pried it apart a bit, so the balance should shift even more to shou input.

On the second infusion the tea is even inkier, dark as a thick-brewed shou.  I brewed it for well over 5 minutes, maybe closer to 10, but not 10.  This should show off not only how well the mix of peel and shou works but also what tea is really like.  Again it's non-distinct.  It's brewed stronger, with the balance between citrus and shou not seeming to change much, just adding more intensity from both.

I can't tell if the shou is good quality or not; mixing citrus in throws off really evaluating it.  It probably was a bit non-distinct without that though.  Some versions can be intensely earthy in different ways, drifting into a dried fruit tone, or towards spice, maybe aromatic tobacco, but more often just expressing petroleum, dark wood, or mineral.

Some shou are just mild, much more subtle.  At the risk of speculating about patterns a bit more than comprehensive tasting can fully support (based only on a couple dozen shou--probably enough) mild, subtle shou tends to be easy to drink even when very young, and both better and worse versions tend to express more complexity and rough edges at first.  Those then even out over a few years and become complex in positive ways in better versions, or just stay a bit odd for others.


I guess that it's not bad; it's not off in any way.  It's a bit like the equivalent of Earl Grey for shou; the tea gets blotted out but the overall effect is still nice.  It might taste a little like a light roasted coffee under there.  The effect from the citrus isn't what I expected at all.  That did seem to transition to be a lot less bright, through aging to the form it's in now.  I'm not sure if it's supposed to be like that or not; I'm familiar with how teas age, not orange peels.

A pu'er vendor once had me try some aged orange peel with tea, maybe 5 years back.  It was supposedly aged in Hong Kong, supposedly 20 years old, or whatever it was (maybe 100, as Chinese stories tend to go).  The idea was that using just a little could add some depth to the tea and bring out some of it's own character; it wasn't about trying to make an Early Grey version of pu'er.  Of course there was a semi-mystical Chinese claim around all of it, about how it really should expand the depth of the feel and such, based on being so old, but as I remember she was speculating that it was more likely a modern product.  Anyway, it was dark too, I just don't remember it being grey.


Looking at the final image after one short infusion and two long ones it occurs to me this may not have been an orange colored orange.  There are a half-dozen at home on the dining room table that aren't the type that actually turn orange; you eat the fruit while the peel is still green.  I'd have to bite the peel to see if that matters much for how it tastes.  The fruit itself varies some across orange versions but not as much as for pineapple, mangos, bananas and the rest.  Juice oranges and mandarin oranges--which they just call "Chinese oranges" here--are different, but the rest are all similar.  To each other, that is; none of them remind me of that "Sunkist navel orange" type at all.


I like the tea; that may not have already came across clearly in the description.  It doesn't express subtlety in the sense of complex layers of aspects, with a range of flavors, since it comes across as a bit mixed together.  It's not earthy as shous tend to sometimes be, no petroleum or tar aspects or anything else too intense, and also definitely not off in any way.


That's not much of a description, but I get the sense that no matter how long I struggled to add aspect listings to that or tweaked brewing I wouldn't get much further.  It's vaguely earthy, clean in effect, with some citrus that's not bright, with mineral undertones and a primary flavor that's as close to a light roast coffee as anything else.  The earthiness covers dark wood range and drifts a little towards mild spice.  That's about it; not bad.

For a tea enthusiast into very subtle, high quality, distinct character teas this wouldn't work at all, unless they could also switch over to a daily-drinker alternative theme.  For a more conventional tea drinker I'd expect that many might like this more than most versions of shou.  Someone really into Earl Grey might not be satisfied with it; the citrus is just so different, muted and warm compared to that bergamot essential oil being intense and bright.

I was surprised this tea brewed a light first infusion, a second stronger version, and ran out of flavor to prepare a third light infusion.  Maybe it wasn't all that much tea to be brewing multiple half-liter pots out of it; that infusion time did add up.  I can't really compare that overall brewing volume with the other earlier cirtrus tea version I tried, due to preparing both in such different ways, but I can go into more comparison of the aspects.

I'm reaching back a bit here, to compare this with a tea I tried 6 or 7 weeks ago, but that did stand out enough I think it'll work.  I didn't get the impression either was made from a great version of the base tea, but neither seemed bad either.  At least both were a bit subdued in character, and not flawed in any obvious way, so both worked.  I kind of hoped the earthy shou effect would be more distinctive and pronounced in this version, since some citrus might balance out even a petroleum-heavy version of shou, if it had a couple years to settle out just a little.


Oddly the two teas seemed closer than one would expect for having those opposing type starting points; a soft, mild, non-distinct shou isn't so different than an earthy, mild, non-distinct black tea.  That earlier Jip Eu version had some chrysanthemum in with the black tea but it only seemed to give it a touch more depth.

The citrus effect did vary a lot.  That other tea's citrus flavor was bright and intense, not quite as sharp as bergamot can come across in Earl Grey, but getting on towards that.  The flavor range varied too, of course; dried orange peel can be similar to a zest but the drying part softens and deepens the flavor range.  That other tea was pretty close to how peeling off an outer layer of a fresh orange and drying that rind-free outer zest comes across, when dried but still quite fresh.  This shou version orange peel wasn't bad for being grey and black--I expected worse.  It was maybe only a bit milder for having experienced some aging effect.  I don't know for sure that means these orange citrus teas are any certain age; it might not take all that long for a peel to turn black and mold a little under the right circumstances.

I'd recommend trying both.  But I wouldn't switch over to mixing these into my own tea rotation, and it's hard to imagine versions coming in an upper-medium quality level, versus these just being quite decent.

I'd be leery of drinking too much of that one, given that peel appearance.  I'm not a nervous person when it comes to taking chances on potentially dodgy teas but I do try to drink mostly versions I have good confidence in related to potential risks.  That really black peel that one vendor had me try once seemed odd too, and the slight whitish / grey surface appearance of this peel made me wonder.  It was probably fine though, probably supposed to look like that.