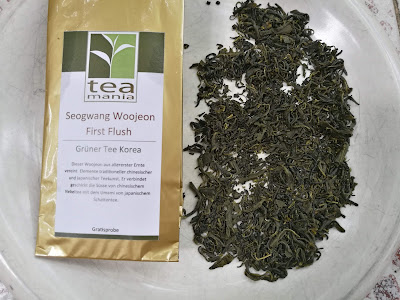 This is another post related to reviewing samples from Tea Mania, Peter Pocajt's Switzerland based online tea company.  I'm only seeing a reference to a similar second flush tea on the site, versus this being labeled as a first flush version; that's funny.  I have no idea how similar or dis-similar those would be.

I want to guess anyway, because Americans can be like that, eager to have an opinion about things they know nothing about, but I'll skip that part.  It couldn't really be as extreme related to the difference in Darjeeling flushes because they don't fully oxidize the first flush version but then almost always make the second as a true black tea, and both of these are just typical green tea.

They do that to get the most out of the inherent character in the leaves in Darjeeling, per my understanding.  The first flush lends itself to making a brighter, lighter, intense floral tone version, with a different second flush mineral intensity, earthy aspect, and muscatel / citrus range lending itself to being made into a more oxidized tea, a true black tea.  Of course I'd have to try a fully oxidized comparable first flush or lightly oxidized second flush to really pull it all together, to see what initial leaf character contributed apart from the processing differences.

I'm going to keep this simple; these posts have been running too long.  I will mention some background location details since I've not been reviewing much from South Korea for awhile, from that Tea Mania link I just mentioned:

The tea garden of Seogwang Farm is located on the Korean island of Jeju. It's located in the triangle Korea - China - Japan and is of volcanic origin. Through the 1950m high volcano Halla, which is a UNESCO World Heritage Site, clouds accumulate and therefore it rains often and is foggy. Combined with mild temperatures and mineral rich soils, these are ideal conditions for the cultivation of high-quality tea.


I brewed this tea on the cool side, maybe too cool, down around gyokuro temperature, closer to room temperature than boiling. It wasn't exactly to optimize the tea, just guessing out parameters.  For that second flush version they recommended 70 to 80 C, but I'm guessing this might've been down around 65 (just a guess, not measured).  I prepared it Western style; something different.

For familiarity with type I'm about as far off as I could be.  I've tried Korean green tea before, that I picked up in South Korea three years ago on a visit there (more a travel theme account of that), but it wasn't sold as an above average quality version.  I did buy tea sold as better quality yellow tea there, and I've tried North Korean green tea made in a Longjing style that was better.  I vaguely recall discussion hearsay that a typical flavor profile might include some type of roasted squash; that's it. 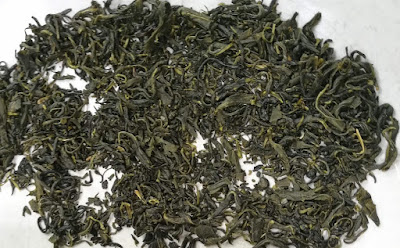 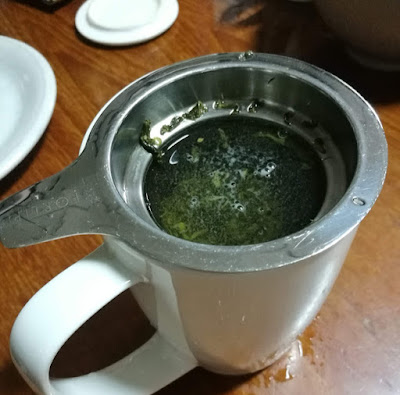 In tasting the tea that's the main flavor that stands out, roasted butternut squash.  Beyond that there's a little pine needle, or rosemary, and beyond that the umami and other vegetal range common to Japanese green teas.  But the balance is sweet, heavy on the butternut squash, with limited umami as some Japanese teas go.  I'd expect that using a bit hotter water would draw out a lot more of that, and the balance of other vegetal range might shift.


I guess that I like it. Green tea isn't my thing but it is quite unique as those go.  That bit of pine is nice, the sweetness is good, and the flavors are clean and bright.  For being brewed using really cool water and a moderate proportion and timing the intensity is good.  The thickness is nice, smooth and full, a bit creamy even.  A little of that sweetness even reminds me of the taste of fresh cream.  I might have did well for final results, but I will try slightly warmer water next round to experience that shift.

Using hotter water did change things.  For a tea this good it would be respectful to actually measure that water temperature but I didn't, again.   The shift is what I expected:  there is still plenty of sweet roasted butternut squash as a main aspect but pine picked up, and seaweed, and the flavor became a bit more savory. It's not astringent; brewing even closer to boiling point might draw that out but this didn't.


A bit of mineral base joins in, like the light rock mineral flavor in better Vietnamese green teas.  It's in average versions of those too but the form and the way it comes across shifts in better versions, a small step towards how Japanese green teas balance.  Upon reflection some of the roasted squash swapped out for green bell pepper too.  For someone who loves green tea this would probably be fantastic; for me it's just good, and interesting.  Again it's the overall balance that works so well, the sweetness, full feel, intense and clean flavors, and the brightness.

Guessing from what I remember of tea shopping experiences in South Korea I bet you'd have to pay dearly to buy this there, maybe even on towards $1 a gram.  The market conditions are the opposite of here in Thailand, it seemed; they don't produce that much tea and it's in high demand. The best Thai oolongs are resold as Taiwanese oolong instead to balance that out here, or at least that's the general understanding that comes up.  I checked the price for this second flush version (the one on the site) and it's CHF 9.9 for 100 grams, or $9.95.  If that tea is anything like this one that's probably a really good deal, less than you'd probably be paying in Seoul.  It sounds like I must be making that up, doesn't it? 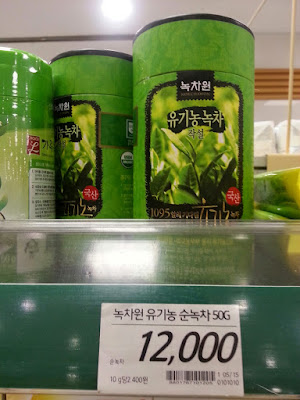 There you go; Seoul grocery store tea selling for around $12 for 50 grams back in April of 2015.  Seoul could be different but I've not had great luck with grocery store teas in a good number of different countries.  Those can be ok but not like this tea I'm reviewing, not on this level.


I get the impression that this will probably brew a couple more rounds in its main aspects profile and keep going beyond that. Since I'm used to far more messing around than doing a few Western style infusions amounts to I can keep going.  I like the messing around, doing 7 or 8 rounds of comparison Gongfu style, but it's nice being on break from all that too.  For the last three Saturdays I've been out on tea tasting gatherings and today I'm just off on break.

The next round hasn't transitioned that much. I think from the aspects the water was slightly cooler; the sweetness and light range picked back up and the mineral undertone and bell pepper dropped back.  The intensity is just as good, and the roasted butternut squash plays a slightly larger role.  Given how many kinds of pumpkin in between butternut squash and the US version of pumpkin this might be as close to one of those, maybe as much like roasted Japanese pumpkin, a sweet version of the Thai one, with a completely different skin appearance.

I'll probably drink at least two more rounds, maybe after a break, since these are large mugs of it I'm preparing. But this is a good place to leave off the notes.  I have no doubt that shifting parameters more would draw out much different aspect sets; it would be interesting hitting this with much hotter water to see what happens. Kind of a shame to do that too, maybe, depending on what comes of it.  It might just seem more like a sencha, with more astringency and umami stripped out, but it would have to give up some of that cool aspects set balance.


I did drink more of this later but never added to these notes.  On the whole it seemed a really pleasant and interesting tea, definitely different than any other I've tried before.  It changed quite a bit related to using different water temperatures, so I'd imagine that dialing in any proportion, temperature, and time parameters would take some doing, gauging those to preference.  It didn't have the grassiness that tends to throw me off green teas, and the umami being there but in a lower proportion than for some Japanese tea versions worked better for me.  The umami effect is cool but I'd gladly swap some of it out for a sweet version of roasted squash and a hint of pine needle.