I've talked about visiting the Bangkok Chinatown before, which would definitely be a unique experience for someone who hadn't been to there.  Since we just did a lot of running around during a long holiday weekend this will do as much with picture sharing as tea, venturing into travel blog range, with a second part on going on a couple of biking outings in Bangkok.

Some prior running themes really came together in this Chinatown visit, although there are still a few loose ends to continue with.  I stopped by to pick up small tasting cups (in that earlier shop picture here), to move away from using paper cups at a later tasting event, onto something like Noppadol supplied for that recent tasting event in the Benjasiri park.

On the first stop I visited K. Muikee Tea, the place that Huyen visited that I didn't make it to, also a vendor Noppadol mentioned being familiar with.  I didn't have much time to sit and drink tea but I did try a Shui Xian they were already drinking; it was nice.  "Nice" covers a really broad range; it was somewhere in the middle of that, if one includes how inexpensive blended versions work out, not limiting it to single-type higher end versions.

I bought some of those white tea and shou pu'er stuffed oranges I had wanted to try.  More than I'll probably drink, since I bought the 100 gram lot or around 10, as they typically sell them, for 400 baht (around $12).  The monks at Wat Pho I share tea with should enjoy trying those too.  I talked just a little with Natapol, the owner, who seemed very nice, but I had other stops to make so didn't stay long.

Then onto Jip Eu, my favorite shop.  I was surprised to see Noppadol there, already visiting.  If I were a more superstitious or spiritual-theme oriented person I'd see that as a clear sign that everything is connected, and nothing really happens by accident.  Of course I tasted a few teas with them there; that's just being polite, for as good a host as Kittichai is.  We tried some Wuyi Yancha there, Fujian oolongs, a couple interesting versions.  I missed seeing his wife on the last visit so it was nice to run across her again this time.  As always they were busy with people coming and going to deliver different teas, but that gives the place a nice feel.  It's like visiting your grandmother's house when spare aunts or cousins keep drifting in and out, or maybe more like tea tasting at a local park with joggers and a group doing yoga there, adding a pleasant busy background.

They sold those little tasting cups there (20 baht each--60 cents apiece), so I bought 30 there, more than I'll probably ever need for an event.  As I'd mentioned in another post Kittichai passed on a lot of Jin Jun Mei, a slightly aged version that I think he said they don't even sell, his own tea.  We'd just been talking about rare teas some during the tasting part of that event, about versions he tends to never mention to people because there is so little of it made or available.  A lot of what they sell are medium to slightly above that roast level better-than-average Wuyi Yancha instead.  Those volume sales, what the guys coming and going tend to be delivering, were blended versions of Shui Xian, what people tend to drink or local restaurants serve, a Chinese roasted oolong version of an English black tea blend (more or less, but that's just my take).  Those are fine, just not easy for me to appreciate being conditioned for better single-type versions now.

Jip Eu sells lots of tea types.  Noppadol bought a ten year old sheng pu'er tuocha while we were there.  That's where I bought a silver needle cake to give to a Thai princess, to HRH Princess Sirinthorn.  Mid-range Dan Cong I've bought there (Ya Shi, or "duck shit" last) would make for a great lower cost introduction to that type.  Pleasant, type-typical, low cost Dan Cong oolong is a bit of an oxymoron; that just isn't how that works out.  Versions of that type of oolong are usually either expensive or bad, with less than average middle ground to try out.  But they do sell it there: tea selling at 550 baht for 100 grams, as I remember, maybe up to 600 now, or a bit under $20.  That might not seem inexpensive, for someone not familiar with better tea, but to put that in perspective it would make around 50 cups of tea.  One single pot of a better quality version costs that same amount in a higher end local cafe, not the kind of place I'd be a repeat visitor at, but more moderate but better tea would cost 300-400 in a cafe, for one sitting's worth.

I've been considering promoting a tea-shop open-house as an event theme, getting those shops to plan to host a more than an average number visitors over a limited period of time.  There's no space for more than a half dozen people to sit and drink tea in either of those shops, but the idea was that if a few shops joined in that would make for a great format for two or three dozen people to visit multiple places over a couple of hours, to spread the foot traffic out.


I walked over to the pier to catch a ferry back home, ducking through a main market alley on the way.  In a flashback moment I saw a shop there I bought Longjing in way back when I was first starting on loose tea.  I'd been drinking Thai oolong that's in grocery stores before then, and a few other versions I'd picked up in travel, Laos, Vietnamese, and Japanese teas, from those countries, when a Chinese friend mentioned the spring's Longjing harvest was selling in local shops.

Those shops sell either loose tea sitting out open in bins (not a good way to store tea--best to avoid that), or stored in very large jars (better; worth a gamble, if you know which types are going to endure that better, like rolled oolongs, or jasmine pearls, or white teas).  Off to the back there's usually a refrigerator where they keep Longjing that's much better (perhaps the main Chinese green tea), safely removed from the effects of Bangkok heat.  I had tried their two highest quality versions that day, six years ago or so, and could tell the difference but didn't prefer either, so I bought the cheaper version.  That's how starting on loose tea tends to work out.


Another shop had teaware, and I really should have thought through that I could use a sharing pitcher and strainer for these events too.  At home I just brew directly from a gaiwan or clay pot--or infuser, for Western style--into a cup; a leaf or two might get through but it works.  I'll have to go back.  They had lots of interesting looking stuff in one in particular, but time was drawing short.  I chatted with the owner a bit and left without buying anything, and saw some interesting things on the way through the rest of the alley based market area.  Even the smells in Chinatown are interesting.

It's worth noting the route that I took that day, since it really does work out for a short tour of Chinatown.  Hua Lampang MRT station (the subway), is just off of the lower right corner in that map capture, a block or two over from Jip Eu, with K. Muikee tea in the middle. That road is called Rama 4 road there, and switches over to being Charoen Krung road as the two meet at a 5 way intersection a bit further on.  Yaowarat, the main road, is a block "down" (South), the one that Double Dogs Tea Room is on in that capture.  All of the South of Yaowarat are small wholesale oriented shop areas, closed after 4 or 5 PM, but really interesting to wander around in the morning or afternoon.  It's kind of a shame to do a quick pass through Chinatown, as I just did, crossing over that top road and then down through the market alley to the pier, but then I have already been there lots of times. 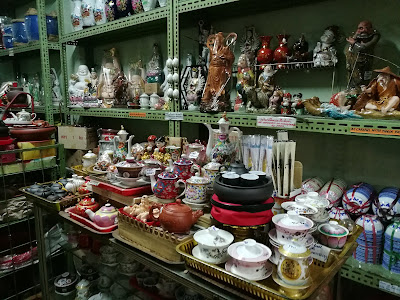 We went on two biking themed outings over this past long holiday weekend in Bangkok, and in this part I'll do more with sharing pictures than talking through all that.  One place I've been hearing about for years is Bang Krachao, or "Bangkok's green lung."  One part is local neighborhood, like a suburb, another is a floating market (less "floating" than one might expect, but it is perched up on platforms on and around some canals there).  And there are bike trails out through a more natural setting, the main draw.

To make a long story short they don't rent bikes for young kids there, or have bikes to rent with a rear seat for a small child, so we couldn't do that part, the main reason we went there.  Some bikes did have two ordinary seats, so Kalani could've just held onto an adult the whole time, but it wasn't worth the risk to us to go that route.


It's funny we're so risk averse, considering how often I see toddlers holding onto a motorcycle handlebars, unsupported by an adult or any seatbelt, but that's just not for us.  I recently saw a video of a woman riding a motorcycle with one hand, while a toddler hung on by themselves, while looking at a smart phone with the other, and she actually took both hands off the handlebars at one point to the type out a message.  Life can seem cheap here.


That market area was nice, for what it was.  I had nice fire-grilled chicken and sticky rice for lunch.  One local vendor made really detailed Pepper Pig and Hello Kitty pancake images, drawn freehand, and Kalani snagged an inexpensive Barbie and two Pepper Pig cups, one to share with a school friend who is moving back to China (gone now; that was her last weekend). 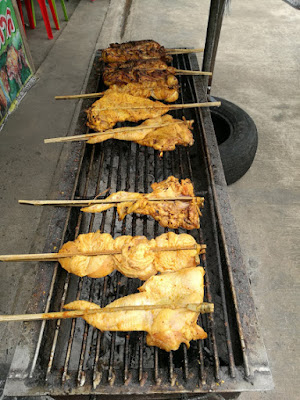 We also went to Rot Fai Park the next day (or Railroad Park, near Mo Chit), our favorite place for renting and riding bikes in Bangkok.  They cost next to nothing there, around $1 for a rental, and the selection is broad.  That circuit is around 3 km long (a bit over a mile and a half), through a mature park that had been a golf course in the past.  It looks less and less like one as the plant life reclaims the space.

I'm going to really miss that little girl who went with us, Olea, Kalani's short-term classmate for summer camp.  Even though she couldn't really use English--or of course Thai; she's Chinese--her bright spirit was a good match for Kalani's.  Kalani can speak some Mandarin, since she's been studying it for two years now, but I think they just didn't need to talk much to be friends.  It was nice playing with two little girls; hearing two different versions of laughter as different things struck them as funny. 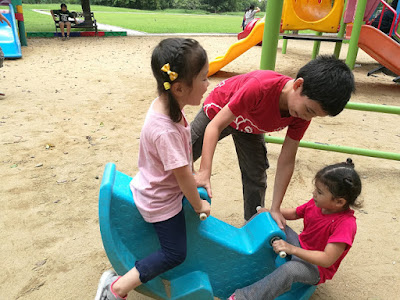 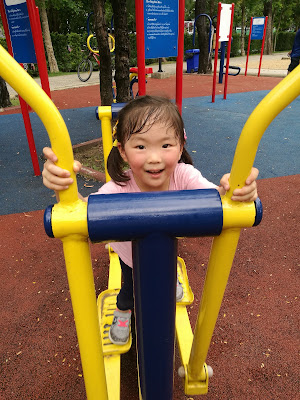 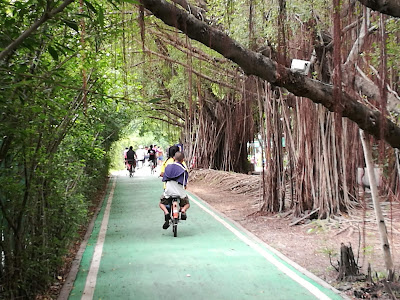 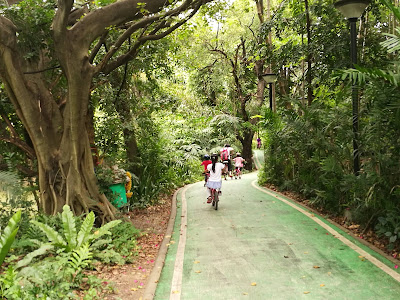 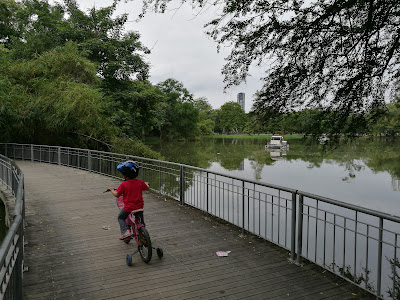