Nepal white tea from that local grower and producer 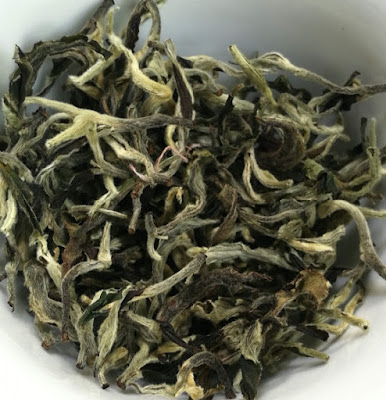 Not so long ago I wrote about a modest scale tea grower in Nepal, Narendra Kumar Gurung,  initiating processing his own tea, in this post.  Now I'm onto trying one of two versions he passed on, the white tea.


This tea would work about as well brewed Western style but in this case I went with Gongfu style brewing instead.  Maybe it'll catch a little more transition, but I doubt it.

You can tell from the scent this is exactly what it's supposed to be for this style of Nepalese white tea.  The scent (and later flavor) is bright, fresh, intense, sweet, light mineral intensive, with a bit of fruit or citrus, in between a sweet version of orange zest and an intense sweet smelling flower.

The first round I brewed light but that's it, a very familiar profile, even though I've only tried related versions a few times.  The sweetness, intensity, and characteristic range all really jump out, even in a first infusion brewed at half strength.  The brightness makes that citrus zest come across a little more like lemon than orange  That list of flavors sounds complex, and it is, but it comes across as there being one distinct, individual signature component.  It's just hard to describe without resorting to a list, to pin down just one thing. 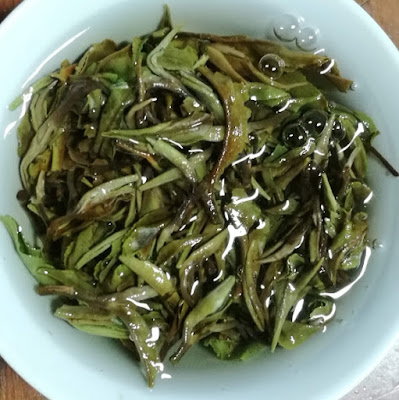 It tastes a little like a Darjeeling, but that's an odd starting point to take up.  I don't remember a Darjeeling tasting exactly the same, even a first flush white tea version.  They can definitely be bright, fresh, intense, and distinctive, just not in exactly the same way, usually trading out a lot of that citrus for bright floral instead. 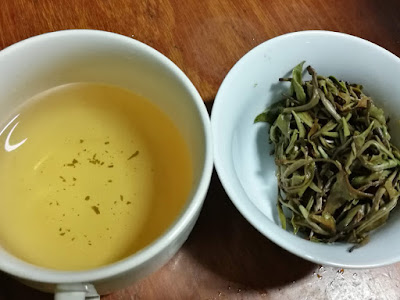 I gave the next infusion around 30 seconds; this proportion is moderate, for a Gongfu style approach.

Everything ramps up.  The creaminess of the feel of the tea is nice; that comes across better.  It goes without saying that there is absolutely no astringency to increase.  A faint hint of dryness and in between tartness and bitterness gives is a touch of edge, if anything almost not enough to balance the rest, but it works for me given how pleasant that flavor it.  Of that flavor set citrus picks up, still supported by plenty of sweet floral.  It comes across as a complex expression of citrus, not just the zest of one type of fruit, but so complex it's as if lemon, a sweet type of orange, and red grapefruit zest flavors are combined.

It probably works to say citrus is the main cornerstone of the Nepalese white experience, but it works as well as it does because that's not all that's happening, due to lots of support from bright floral and a light mineral base.  I might be overusing describing aspects or general effects as "catchy" lately, now that this tea version is taking that an extra step further.  I really should order this tea; I like lots of teas but I could drink a kilo of this.

On the next infusion (the third, but the first was light) the mineral undertone picks up a little.  A green tea drinker might really be able to appreciate this; it shares some common ground with that range, as much as it does with a lot of white teas.  What I was describing as a bit of bitterness mixed with tartness might be a touch of sourness mixed with tartness, but more tart than the rest.  Combined with a lot of sweetness, citrus range flavor, some floral tone, and a light mineral base it all integrates really well.  Anyone who has tried a Nepalese white like this already knows what I'm going on about, it might just be a little sweeter and brighter than some versions. 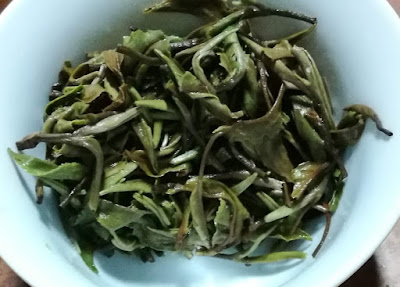 This tea will be perfect for those tea tastings I've been having.  Even a child could appreciate it.  There is nothing challenging about it, and anyone who likes citrus fruit has an automatic "in" for relating to it.  On the opposite side of that if anyone disliked citrus fruit in general this tea could seem nasty.  I love fruit in teas, which is why I love the Wuyi Origin produced Wuyi Yancha that express those most, but someone else once commented that they seem too much like fruit punch to them.  One Rou Gui stands out for that, but another tastes more like that characteristic version of cinnamon, with others spanning the rest of the typical range.

The citrus effect is completely different than in Earl Grey.  It's not that far off in one sense but in another it is.  Bergamot is a bright but also rich, sweet, intense orange flavor; different in flavor and a good bit heavier than this.  Others might not necessarily interpret this as close to citrus as I am; it could also come across as a bright floral instead.

As far as shifting around the effect through changing use of boiling point versus cooler water, or adjusting infusion time and proportion, this tea probably wouldn't change as much as many.  It's a positive and a negative; you don't need to brew it carefully to get great results, but there is probably less range for adjusting balance.  Of course adjusting infusion strength does work, and that water temperature adjustment would change character a little, but there isn't much astringency edge to draw out, no matter how hot or concentrated you make the tea.  It could seem too light and sweet for someone really acclimated to intense, multi-layered young or semi-aged sheng.  Per my preference it's hard to imagine someone not being captivated by that intense flavor experience, in such an approachable aspect-set context, but then preferences do vary.


An odd association comes to mind:  my wife has been making her own version of natural shampoo lately, part of an ongoing sequence of strange projects to fill in some free time.  That part is a long story; she has two Master's degrees, in education, computer education technology to be specific, and in journalism, one from the University of Hawaii at Manoa, where we met as grad students there.  And since then she's dabbled in journalism again (following being a reporter here prior), done translation work, trained and registered to be a tour guide (but not actually worked as a tour guide), and has learned a good bit of Mandarin, which took most of a year.  Anyway, about the shampoo, a main ingredient is kaffir lime, and this isn't so far from the scent of that.  I've not tasted it but it must be bright, intense, on the sweet side, and of course sour.


I wrote that initial review some weeks ago; the initial back-story post was delayed for submitting it to TChing for publication, and I waited a week after running that other post to add this review.  I did have the people at that tasting a few weeks ago try this tea.

They liked it, but I didn't get the sense they appreciated it as much as I did.  Nepal white teas can be really novel.  Although there's no reason why someone couldn't love them the first time they tried one, since they're not challenging, to really appreciate how good one is based on the range they express it can help to have been through trying one before.  We tried a Gong Mei first that day (a slightly higher grade version of a Shou Mei, a compressed Fuding white tea), and then this Nepal version, and the participants seemed to be surprised by the range two different white teas could cover. 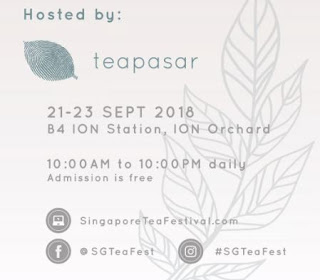 It's not a closely related subject, but there will be a tea conference (festival, expo, whatever) in Singapore in about two weeks, with a FB page reference to that here, and website here.


The connection is that Narendra will happen to be in Singapore at that time, so he will stop by for at least one day.  Anyone in Singapore with an interest in tea from Nepal could reach out to him, probably as well through his FB page.  He won't have a booth at that expo or anything like that because he's really going there for other business.   Of course the event would naturally be of interest to tea enthusiasts or business related vendors there anyway.


The influence of novel blends at that event is interesting (evident in the vendors' information, more than the event schedule).  People in Thailand are more into flavored powdered teas at this point, and of course also matcha based drinks, with focus on both creative tea blends and on better quality traditional orthodox tea lagging a bit.  The workshops schedule also looks quite developed for an event like that, as follows:

To extend that tangent just a little, Singapore is the country I've visited most outside of Thailand.  I haven't been there for years now, maybe 3, but we had visited for vacations lots of times in the past, and I've been there for business a few times.  To me it seems like an Asian version of Canada, very clean and orderly, convenient and comfortable.

It's small, maybe half the size of Oahu, with a population that's probably on par with Honolulu.  Both places share an unusual degree of diversity, with no racial or origin-country majority in either, which works out well in Singapore and in Hawaii.  There's enough there that you could visit a half dozen times and not see the same things, but at the same time three days is plenty to get the feel.  Bangkok might be seen as the opposite; you just never take it all in, people can get a good feel for the parts that interest or relate to them, and that's about it.

The Chinatowns in both places represent the different story of both cities (and countries).  Bangkok's looks exactly like it did 50 years ago, with this city only removing old buildings and neighborhoods to make way for tall buildings one by one.  Singapore systematically replaced entire neighborhoods with rebuilt structures over that same time period; most of the old city is gone.  The different approaches work in both places, it just gives them completely different characters.