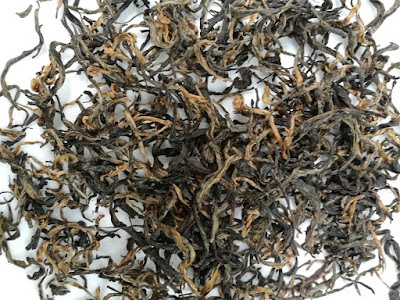 I'm trying the second and last tea from Nepal from Narendra Kumar Gurung.  He's the tea grower starting into local production, with that story covered in this post, with a white tea reviewed in this one.


The dry tea scent was sweet and rich, lots of caramel and sweet malt, with earthiness under that, and smells around the roasted sweet corn range.  We'll see how the brewed tea aspects complexity matches up with that.

The first infusion is a little light.  That's normal for me brewing tea Gongfu style, something I do intentionally, but since I'm brewing this Western style that will throw things off just a little, since half or a third of all the tea I'll be describing based on being that strength.

I never tend to go there but I sat the basket back in the cup for another three quarters of a minute to adjust that.  That's more like it; right in optimum range. 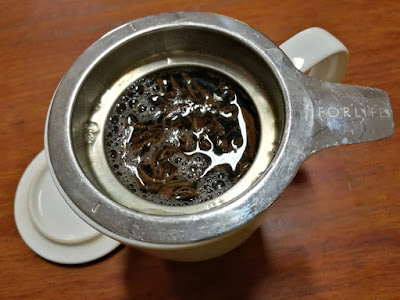 The tea is interesting.  Before the flavors-list approach I should mention that being made of bud content and fine leaves changes things quite a bit.  Across regions, tea plant types, and preparation styles that input pulls aspects towards a dry, pine-resin range, with good sweetness and complexity, and moderate but limited astringency, not exactly like leaf-only black tea.

This tea is like that.  Malt stands out, and the sweetness, a dark-toffee version, along with that pine-resin aspect.  Brewing the tea using completely boiling point water will accentuate the astringency, that pine nature, and the toffee / dark caramel edge.  Dropping temperature even a little, down to 90 C instead, changes a lot, and for many 95 C might be better, in the middle (203 F, for Americans).  With variations that small making so much difference pre-warming devices comes into play; a cold infusion device could absorb that much heat.

Maybe I'll do the free-association extended flavors list before the impression summary this time; mix it up.  There is a hint of roasted corn in along with the rest.  Mineral stands out too, a deep base layer that really spans dark clay mineral and iron bar.  I just tried a tea from Shillong, India, not at all one of the main producer areas below (South of) Assam, and some of the character overlaps in that regard.  This also hints toward the dark cinnamon version found in Rou Gui (cassia instead of true cinnamon, maybe that is).  It always sounds good to say a tea tastes like fruit, it adds to a list, and if this does it's more of a dried fruit, closest to dates, but also not all that far from fig.  Cocoa might work better as a description, folded in with the rest.  It's definitely complex.

This doesn't really closely remind me of any version of a different tea.  That Shillong version isn't too far off, in one sense, but still quite different.  If Darjeeling plantations prepared first flush versions as fully oxidized black tea I think they might turn out similar to this, but they don't, they process those to very low oxidation levels compared to normal black tea range.  It's not that far from some better Assam but lighter and more complex.  Buds-based versions of those tend to have a good bit of kick, more malt intensity, more of that pine resin, and more astringency to match for feel, even in good oxidized versions (based on what I've tried; of course styles and outcomes would vary well beyond what I've experienced).

The feel includes a mild dryness, not really in the form of a typical mouth-tightening astringency, but after your drink it your mouth tightens and drys just a little.  At this level that's quite positive; without that general range a tea can seem too soft, and the experience can seem to lack depth.  It's good tea.  I'll check on how it transitions on a second infusion. 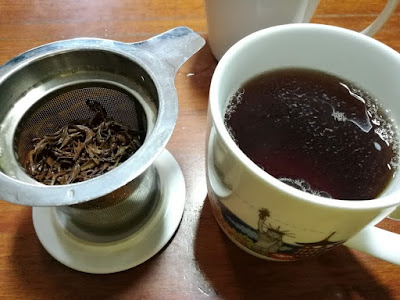 More of the same; per usual the balance of those aspects shifts more than those change.  This tea would be interesting to try Gongfu style, to split apart all the range of transitions, I just didn't feel like going through it or doing that longer write-up.

I brewed it on the fast side again, a bit light, but it works well like that to me.  I'm using a pretty high proportion of the tea given how intense these buds and small leaves tend to be.  This kind of tea will brew a lot too, typically; well after leaf-only versions should be finished (or passed on into just being unpleasant) extended brewing times can continue to draw out very positive infusions. 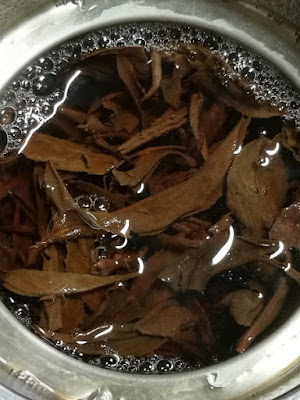 The feel is lighter at this slightly lighter infusion strength, and it may have shifted some beyond that.  The dryness is diminished.  Complexity is still there; lots of toffee sweetness, layers of mineral and spice, malt, cocoa, and limited dried fruit.  That pine resin range dropped back along with the related astringency, and the malt is moderate.  It's not really a "basic" tea but it is approachable, easy to relate to, not challenging in any way.


Chinese black teas can be even sweeter and can express complexity further away from that base of malt range, but this is pretty complex with a good bit of sweetness as the range of related Indian style teas go.  Of course it's not Indian, but the general style falls closest to those compared to any others, in a sense in between a Darjeeling and better Assam to me in style, versus being more like a Chinese black tea.


I've mentioned different aspects serving as quality markers in different tea types before.  In sheng it's overall balance that matters, how the set of complex aspects works together, but aftertaste tends to mark out quality, along with mouth-feel.  In Wuyi Yancha it differs by type but usually subtlety, complexity, intensity, and ability to express a sophisticated aspect that identifies each type is the thing, maybe earthy cinnamon or fruit in Rou Gui (two styles), or aromatic components in some others, a liquor-like quality.  In Taiwanese oolongs often that relates to a pronounced characteristic mineral and floral-tone, a little flinty but intense and sweet.

For this general type "how good" it is depends on complexity, on being very clean in effect, and which flavors and other aspects it expresses.  It's quite nice; there is limited range for it to be any better within this style.  How someone would relate to the style just depends on preference instead.  For me there are Chinese black teas that I can't imagine anyone not loving, with rich, complex, very approachable Dian Hong as a personal favorite.  It's hard to imagine anyone not being able to relate to this style of tea, to not liking it.


This will work as a preview more than as a conclusion to the black tea review; I talked to Narendra some about visiting an interesting Singapore tea expo event, which just occurred over the past week.  Someone else I'd met during that first tea tasting event here in a Bangkok park, Cedric Teng, also attended that, and passed on some detailed input and pictures as well.  There was a unique twist of matching visitor tea style preference to suggestions about which booths to visit, which I'll mention cover more about later in another post.  It reminds me of an article and related discussion of whether or not it works to identify tea preference based on what flavors and style of wine someone likes (here), which of course is a much less sophisticated process than this.

It's been interesting hearing about different tea events, how the themes go in different places.  The best documented similar event is the annual World Tea Expo in Las Vegas, since US based bloggers join that, an event with lots of seminar sub-themes.  But events go on in different countries, ranging from sales events to brewing competitions.  Also in the case of this Singapore event a good number of seminars delved a little deeper into selected subject matter.  There was just an event in Melbourne in the past two weeks too, but I didn't hear as much about how that went.  In a post about Polish tea culture (the second one with local blogger input) it came up that quite a bit of that same scope is covered in events there.

I've attended what should have been tea related expos here, always joined with the theme of coffee since tea interest and commercial scope can't support a dedicated event in Bangkok.  It's a little sad joining those, since there is typically not much coverage related to tea as standard vendors go, and none at all for presentations or seminars, with almost all the scope covered related to coffee.  It's always nice to hear that specialty / orthodox tea gains more traction in other places.