Blind tasting Yiwu maocha, and about an LP group buy 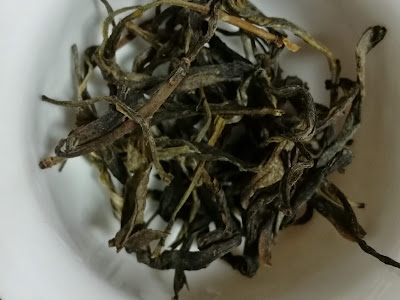 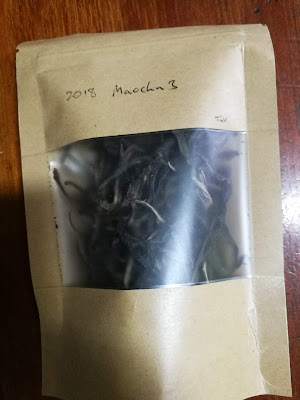 I've been through some really interesting tastings related to Yiwu Mountain Pu'er samples, across a broad range of Yiwu originated pu'er.  Initially that related to multiple year tastings, to comparing teas to notice the effects of aging versions.  The last tasting was different, a blind comparison of two very good and very different versions.  This will just be trying a single tea, the third sample in that set.

This tea is probably from Yiwu, and that's all I know.  I won't be able to identify more specific origin and processing variation details just from tasting because I'm just not there yet, but I can definitely relate what the tea is like.


The dry leaf scent of this tea is really sweet and rich; that's different.  I wouldn't even guess this is sheng based on that smell.  Surely Philip didn't throw me a curve in swapping out the tea type?

I'm moderating proportion a bit, not going for the packed gaiwan effect, requiring flash infusions.  This first round is a bit light so I'll only have an initial impression.  It's sheng, but a particularly sweet and complex version of one.  Yiwu is often sweet and floral but this is something else, really floral, very sweet, and on the soft and approachable side.  Even light, as sort of a half strength version, the feel is full and creamy and the aftertaste is already pronounced.


This tea is different.  The flavor is there, pleasant and reasonably intense, but it has lots of depth across other dimensions that overshadows that.  Other flavors beyond the floral range add complexity, including depth that seems to relate to mild spice.  For now the feel stands as much, not astringent but full and creamy.  It's odd the tea could be that smooth and still express that thick feel.  The aftertaste runs long too, again odd that comes out as much as it does in a tea this smooth, with as limited a bitterness as it has.  You definitely don't need a tolerance for bitterness to appreciate this tea. 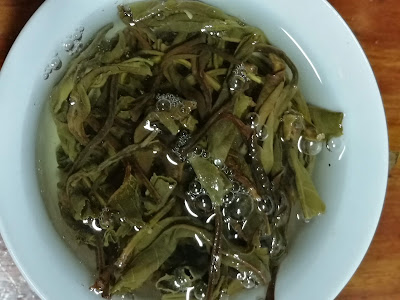 Next infusion is more of the same, nicely complex.  Sweetness stands out, and lots of floral character.  There's a depth to the tastes that I interpret as mild spice, a warm subtle layer.  The bitterness is very limited in this tea, just enough to balance out the rest.  There's a trace of sourness too, which actually isn't negative, it integrates and comes across as pleasant.  It's like the role of that aspect in a good version of a spiced sweet pickle, just lower in level.  This compares with that in more than one sense, with the sweetness and spice also present. 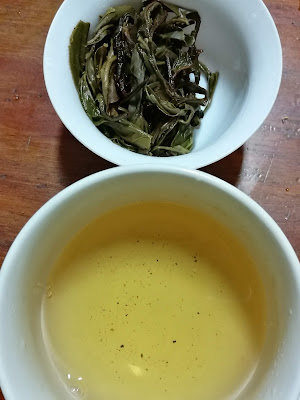 The overall effect is nice, beyond the pleasant flavor profile.  It's soft and rich, not what one would expect at all in young sheng.  Somehow it doesn't seem like how age takes the edge off new sheng either; it's still bright and lively, just missing a lot of the astringency that typically comes with the type, but retaining fullness in feel and aftertaste.  The feel coats your mouth, with the flavor not diminishing much at all after you swallow the tea.  Often that pairs with bitterness; that aspect transitions to sweetness, but this is something else.

Being this mild there is no need to use flash infusions to balance the intensity and limit those aspects, so I'll let it run a little longer and see how it comes across as a stronger version.  I guess for some this style would be too approachable; they'd miss the way that typical set works and it wouldn't seem to balance properly.  Being a natural oolong and black tea drinker I like it.

The fruitiness picks up a little on the next infusion; this is relatively fruity as sheng goes at this stage.  It's complex, not simple to separate out all that's going on, or easy to assign a more specific range to that fruit, mixing in with the rest as it does.


The next round is more of the same, a bit fruity, complex, pleasant but unusual in aspects balance.   I'm curious what led to this character.  Is it a more oxidized version of sheng, is that why the sweetness is up and flavors cover a unique range but the feel is so smooth?  Some wild grown tea versions are mild, earthy, and complex but others can be quite bitter; plant type and processing steps seem to be equal factors in how they turn out.  Yiwu tea versions are typically approachable, even when young, not too bitter or astringent, but not typically this mild in character.  The next section covers what the vendor says about it but never does completely unravel the related inputs. 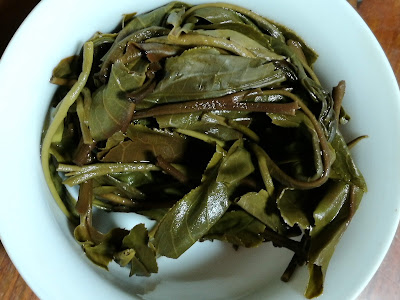 
Phillip said that it's this:

This tea has been especially selected for its outstanding attributes and drinkability as a fresh Puer.  Enjoy tasting the tea as it matures from completely fresh maocha finished processing in late March 2018.

This single estate maocha is a premium quality from one of the most amazing terroirs in Yiwu.  This tea is outstanding in terms of it's aroma, sweetness and qi, and holds out very well over a long session.  This maocha is typically selected to be sold by or blended by vendors as part of their premium selection.  However, it is this quality that makes the tea outstanding and worth the price.


They sell it for $21 for 50 grams; not cheap tea but it seems to be in the right range, given expectations related to what I tried.  Being atypical, unusually complex but not covering much in the range of bitterness and astringency, makes it harder to compare to other versions.

That blending idea he mentioned is interesting.  Of course no one is going to buy a tea at nearly 50 cents a gram and blend it (are they?), but the idea is still worth considering.  I drift towards trying lots more single-type teas, like this one, and experiencing and appreciating a limited set of attributes, which varies from version to version.  It certainly would be possible for vendors to apply a blending approach instead, and try to combine the strengths of different teas in different ways (and blend around gaps and flaws, seen the other way).  I run across the idea more in relation to black teas sold as blends, and what Da Hong Pao--the main Wuyi Yancha type--tends to be, but it would work for sheng too.

We never did talk more about it, Philip and I, so I don't know more about why it turned out as it did, and to some extent that doesn't matter.  He did mention something about basic Yiwu character, which would be well-traveled ground in this blog already, but his basic summary version is clear:


The Yiwu style teas don't really have a strong feel of astringency that most teas have, even when oversteeped. It's pretty well known amongst puer drinkers that if you have a preference for 'strong' (bitter/astringent) teas then Yiwu is not going to be the obvious choice. It's the sweetness, aroma and aftertaste, that stand out and any initial bitterness/astringency adds to the contrast by quickly fading for those other attributes to shine.  This overall experience is one that is heavily marketed and is what makes the good Yiwu teas have such strong reputation in the market. One might argue that this is how you can differentiate the best teas.


Placing the style in relation to trying other sheng, and about a group buy 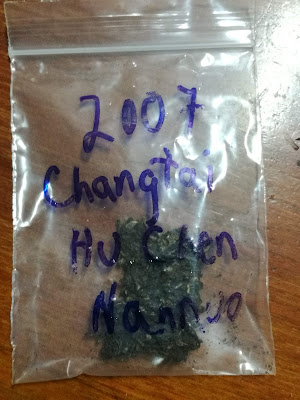 It's kind of completely different subject but I just tried a 2007 factory sheng someone from those tasting sessions passed on, sheng in a completely different scope.  It had aged to taste a bit earthy, mostly like tobacco, which I'd assume different aged sheng drinkers would have different preference-related takes on.  I liked it.  That deep mineral effect is nice, even if centering on tobacco as such a pronounced flavor aspect could be a bit much for some.  I think it was inexpensive, with an aged 357 gram cake costing less than 100 grams of this Yiwu sheng.


I didn't get the impression that this Yiwu version I tried would be any better in 10 years, that it would make sense to age it.  More generally I have the impression that higher levels of bitterness and astringency make for a more natural starting point for aging, since that range will transition, where a mild, sweet, flavor-intensive but subtle sheng might just fade.

On the subject of rambling on about trying random things I finally took part in one the Liquid Proust sheng group buys (I just haven't tasted any yet).  The main form I wrote about some time ago, the "Sheng Olympiad," but this was a beginners' introduction set instead.  I'm not sure if that other group-buy version would've been more suitable but I love the idea of considering what someone in the role of a sheng evangelist thinks would make for a good introduction, and it'll be cool to try some different types.  That site I mentioned sells teas but these group buys are something else; you'd either have to see a post on Reddit or Steepster by him to know he was doing one or follow him on Facebook and see a post.


A "tea haul" style photo would introduce that set but for whatever reasons I've come to see those as a little obnoxious, maybe just burning out on the theme from running across too many.  The set looks like a dozen samples of sheng.  One is labeled as an LBZ; that's not starting with the basics, in one sense, but trying some things across a broader range fits a different meaning of an introduction.  It's my impression he didn't choose basic, type-typical, low-medium quality standard region-profile teas as much as what he considered to be a look into different characters.  It'll be cool.


It's not simple to place this Yiwu version in relation to a moderately priced aged factory pu'er and a set covering a lot of different range.  I like better versions of Yiwu sheng; they tend to be approachable, as Philip mentioned, sweet and floral, relatively intense, with good balance and intensity and a pronounced aftertaste.  Most are fine to drink young, positive for being so intense and bright in character.  On the downside Yiwu is in high demand, so better versions tend to not be inexpensive, and inexpensive versions tend to be less intense, a bit flatter, missing some part of that aspects set.  They can be made in a more traditional style, as this Tea Mania version was, and those are slightly less drinkable initially, with more astringency, and would probably improve more with age.

I'm expecting a lot of those beginner's set samples to run into the type of trade-off that people new to sheng often complain about:  bitterness or astringency being too much, or tasting a bit like kerosene.  Usually that comes across as white cardboard or an odd expression of mineral to me but it's funny hearing it put like that.  This Yiwu I reviewed here was way towards the opposite of that, uncharacteristically smooth and easy to drink, bright and clean, sweet and complex in flavor and feel at the same time.
Posted by John B at 9:59 PM