I spoke with Cedric Teng, who I first met at a Bangkok park tea tasting awhile back, about going to a Singapore tea expo / festival held recently.  He agreed to pass on some photos and notes, which are really closer to a complete guest blog post than limited input.

Narendra Kumar Gurung, the Nepal tea grower who started on developing local processing capability this year (covered here in three posts), was also in Singapore over that time frame.  He only visited the event briefly since he was there on other business, but I'll also pass on input from him as well.

A second related post to follow will cite the organizer's online reference about one of the more interesting aspects, a flavor profile evaluation technique.  That was used to make suggestions to participants for which vendors to visit and what teas to try at the event, related to aspects preference.  That post will extend discussion into related methodologies and evaluation approaches.  Here the subject just gets covered related to Cedric's take on how it worked for him, with his complete account of the visit following.


The Singapore Tea Festival 2018 was held at ION Orchard from 21-23 September, and featured a plethora of tea enthusiast selling any and all things tea-related. The event was organized by Tea Pasar, an online tea marketplace that hopes to help tea drinkers understand their tea preferences, and connect them to tea suppliers and producers across the world. There were also workshops and masterclasses available for people to find out more about teas and the brewing process. 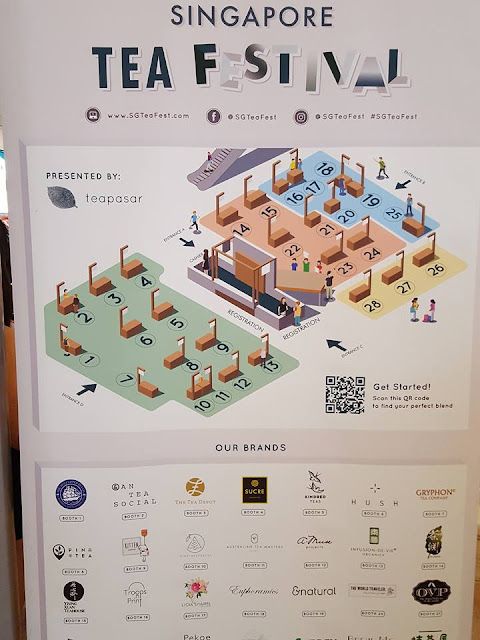 First and foremost, visitors were encouraged to register for an account on the Tea Pasar website, and were given a free porcelain sampling cup upon registration. This cup was to be used to sample teas from the booths available. 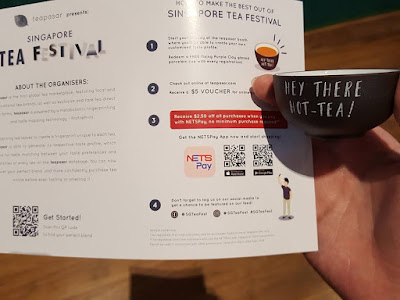 Once into your account, users were prompted to select their tea preferences based on 8 different tea characteristics, namely sweetness, umami, saltiness, sourness, astringency, bitterness, aftertaste, and richness. The online algorithm will then formulate an individualized Profile Print based on these preferences, and offer some suggestions for teas that you may enjoy and the percentage match. 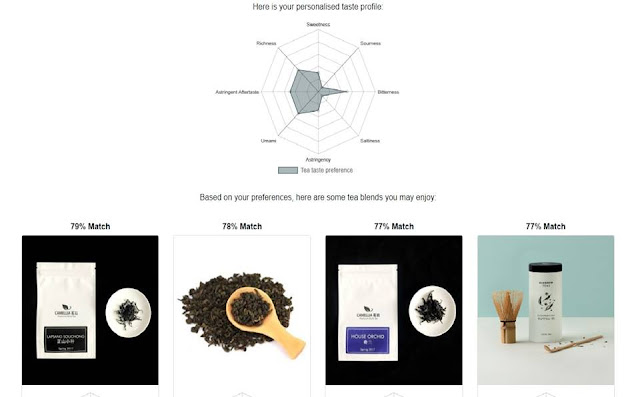 Many of the teas available on the website were available for tasting at the event itself, making it super convenient for visitors to discover first-hand the type of teas they like, and also to tweak their preferences there and then as they sample the teas available. For me, my Profile Print started me off with a Wuyi mountain Oolong from Camellia TeaBar. The great thing about the festival is that you get the chance to talk with the tea brewers themselves, who can provide feedback and recommendations before you decide which ones you liked the most. Although my recommended tea, the Lapsang Souchong, was not available for tasting, I tried a few of their other Oolongs, my favourite being the House Orchid, which was lighter with some floral notes. 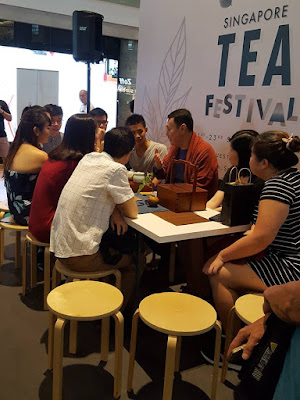 With the number of booths available, it soon became more convenient to just go from booth to booth rather than follow the website recommendations, and I found myself sampling a bit of everything. Starting with the Oolong, I moved on to try a few different types of Pu Erh, before ending it off with some tea blends at The Tea Depot. In particular, I liked the Eight Secrets tea, which was a blend of eight different teas, which had a nice fruity aroma of lychee. 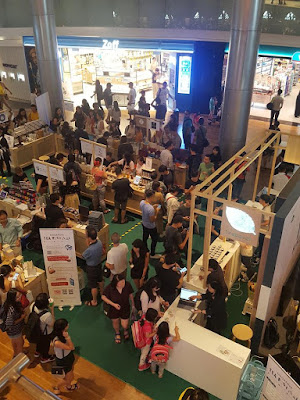 All in all, I feel that the Tea Festival is definitely a great way for people to start figuring out their tea preferences or explore new brews, and with the array of teas available, it is likely that you would be able to find quite a number of brews that suit your tastebuds. Even though I started off preferring teas which were stronger and more bitter, I found myself gravitating towards sweeter teas with floral or fruity notes in the end, but I think more tea needs to be drunk before I decide on my preferred tastes.


There's a lot more I might comment on related to all Cedric covered, of course starting with noting that his account was well-developed, detailed, and clear.  Before moving onto Narendra's input about the same event I'll add a couple comments about Cedric's experience.

One part that stands out is his reaction to the tea profiling system they used.  His description didn't seem to reject that it was practical, or critique the form, but due to him still exploring which basic types and aspect themes he likes best in tea it seemed the functionality was limited.  I'll get back to all that in a second post about that subject.

He also didn't seem to experience their "workshop and activities" functions, an interesting looking part of the event.  To some extent that would be more relevant to people with a deeper interest in exploring some specific tea theme, or so involved with the subject they'd want to explore many.  Here is that event workshop schedule, cited from the event page as follows:

I really should have visited that; Singapore is right down the road from Bangkok.  Even just visiting the booths and trying and discussing different types of tea would've been worthwhile.

Narendra and I discussed the same event online by message, here condensed down to a few key points, covering his impression.


I visited on the last day of the festival, at around 6:00 pm, after attending a Nepal Day event held in a central area.  The tea expo was only three MRT stations away [Sinapore has the most functional subway system I've yet experienced].  I visited with my daughter and brother who lives in Singapore.  It was quite busy, with a large number of people eager to try many teas one after another, asking various questions to each of the exhibitors, with the event seemingly a junction of teas from around the world.

We went around to each stall and tried teas from many different countries and places. Of course each had their own unique taste, flavor, packaging and presentation style. Singapore is truly an international hub, represented in that diversity.  But the tea tasting part of the experience seemed a little less genuine in form than the original preparation and drinking styles can be, probably due to demands of the format and the rush to serve so many people.

From my days in Fujian tea college the more genuine taste of many of the teas may not have been carried over due to the fusion of different preparation styles, which may have resulted in changes to different aromas experienced.  On the positive side there was a good energy from that crowd participation theme, and exposure to a greater number of participants.  Some teaware on display was also very eye catching.  But due to time constraints we couldn't meet the various tea masters and hold in-depth discussions about the products.

That event forum definitely has potential as an opportunity to explore and expose a larger number of people to the original character of Nepal tea. Nepali teas grown in high altitude and an organic manner could definitely attract a lot of tea lovers there.  But there could be some more work to be done in terms of better branding, packing, and advertising to support that. Nepali teas already produced have their own distinct, original style that compares well to others, but it may also be helpful to add more value by adjusting style to meet differing preference demands. 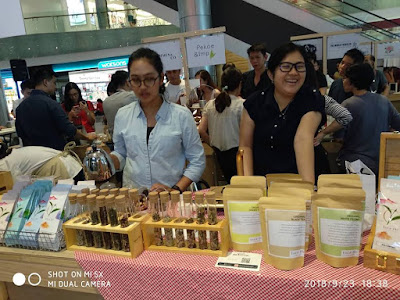 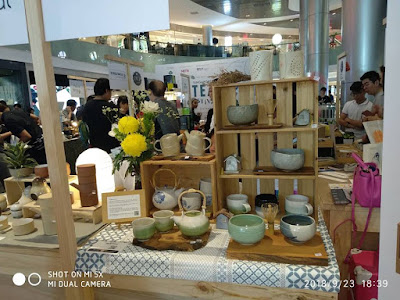 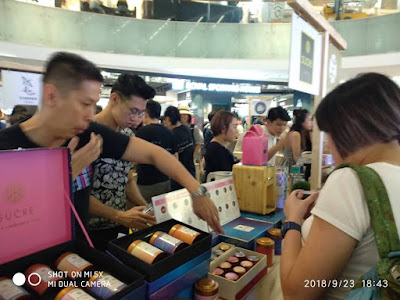 Conclusions, and about Singapore

The event sounded great to me.  In the initial draft of this post the next section covered the Teapasar flavor profiling system used at the expo, but that ran so long that I've split it out into a second post to follow.  That system seemed very novel, creative and forward thinking, obviously not something put together quickly for marketing purposes or event organization.  I'll get back with more details, and more about other related systems of tea aspect evaluation and summary.  Regardless of those details the general theme can all serve as food for thought for tea groups and event organizers in other places.

I'll close with a bit more background about Singapore instead.

Singapore is one of the two most culturally diverse cities I've ever visited, roughly on par with Honolulu for not having any one majority of race or background culture among residents.  It's the country I've visited the most in South East Asia, at least a half dozen times in vacation visits and work trips. There are four main groups living there, related to background:  from China, India, Malaysia, and "other," Westerners and people from all over.  As a former British colony that English background would have been more influential in the first half of the 20th century but Singapore is very diverse and mixed today.  Singapore was a part of Malaysia after that, and later split off to be an independent country.  You can imagine how diverse the foods offerings are there.

It's unique for being a city state and an island, literally just across a bridge from Malaysia.  A co-worker was just talking about how you can reach the closest town / city in Southern Malaysia by bus in half an hour or by high speed train in 10 minutes (seems a bit too fast, doesn't it; it takes me 45 minutes to get to work within Bangkok, and I don't live that far away).  We've visited the Legoland theme park in that area from Singapore on a day-trip before, by bus, and it seemed to me that took more like 45 minutes or an hour, but either way it's close.

Related to the infrastructure there, and more specifically to commercial expo / conference events, Singapore is clearly the most developed country in SE Asia.  Many parts of Bangkok are as modern as places get but Singapore is still ahead overall.  I'm not surprised that the event was managed professionally, with vendor participants showing mature development of supporting products, packaging, and marketing themes.

Beyond developing an amazing subway system in expat discussions Singapore is regarded as having the best airport in the world, Changi.  I completely agree.  It's a hard point to argue, getting into details about efficient processing, food and shopping options, look and feel, internet services, transportation, and so on, but I'll cite an example that puts it in perspective: there's a butterfly garden in one terminal.  They cover the basics better than any other airport I've visited but also take things to another level.

I haven't been to Singapore in about 4 years, so I was already writing this blog the last time I visited, but I've ramped up tea interest and exploration quite a bit since then.  At that time I just looked around Chinatown to see what was there for tea and didn't turn up much.  This general commentary section stops short of describing broader tea culture in Singapore then; it's not something I've been exposed to much.  Of course I've talked to people in Singapore about tea by message; that comes up related to lots of places, in part due to being an admin for an international themed Facebook tea group.  But I have no summary version or additional observations to offer.


Part two of this post to follow will continue on about tea flavor profile evaluation, about the approach taken at this event and other related frameworks and systems, even about to what extent machine testing can cover related scope.  Can a machine taste tea?  Of course not, in the sense that we do.  But the extent to which one can might be surprising.