Tea culture in Poland (2), informed by a local tea blogger

In this first post about local tea culture in Poland I asked for more input from local readers, and a tea blogger there responded with a lot of it.  Agnieszka Chojnacka is the author of My Cup of Green Tea (although the blog isn't just about green tea), and she's one of three coordinators for The Warsaw Tea Society (Warszawski Kolektyw Herbaciany).

That makes how to cite her description in the title tricky.  "Blogger" doesn't really capture the authority or background level, or "enthusiast," but words like expert and authority seem a bit presumptuous.  Those conflict with the sense of humility that comes across in her writing.  She's definitely a tea evangelist but she doesn't seem to make it about her, which to me is a great approach.

We sort of have to relate to our interests based on some degree of subject-object relationship, especially for a subject as experiential as tea, but to me it retains more of the original Eastern-culture context to downplay that.  That point can get lost in Western tea circles.  Communicating "my" knowledge, preferences, and skill in practice can sometimes overshadow the parts that are best shared as common to all.


Her input is so clear and complete that I'll keep it all in her own words, citing this more as a guest blog post than as content that I've played any part in.  She doesn't expand on the history of tea drinking in Poland but she does add a lot about current directions, reference sites, blogs, organizations, and local events.  Enough framing though; let's hear that from her.

That starts with a first of a set of photos from her, described as following, then onto her other input:


Two photos from Svátek čaje (in Czech: Festival of Tea) in 2016: the first photo depicts members of a panel discussion about how tea blogs affect awareness of tea among Polish people. The second one shows the stall of one of the Polish tea shops which I mentioned in my comment (TheTea). 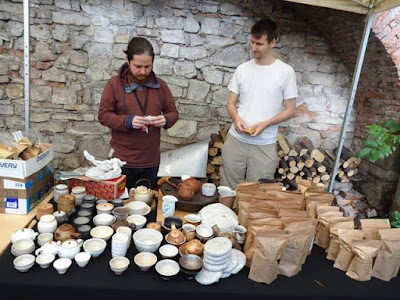 I am writing in reference to your recent blog post about tea culture in Poland. I would like to add something from myself. I am a tea enthusiast and a tea blogger (My Cup of Green Tea) based near Warsaw, Poland. I love drinking orthodox loose-leaf teas, especially those coming from countries that are smaller and less known tea producers, for example: Vietnam, Kenya, Malawi, Thailand (I still remember the taste of a delicious Thai tea from Monsoon Teas named Dhara White) and New Zealand.

[Kenneth of Monsoon would be so happy to hear of that, unless that reseller isn't citing the direct source, then maybe that part might be strange]


As to the general situation in Poland, that’s true that many Polish people drink tea (usually black) in the form of tea bags, but I think that more and more people are choosing orthodox loose-leaf teas of different types: not only blacks, but also whites, greens, yellows, puerhs and oolongs. There are more and more tea shops where such type of tea may be bought, for example: Czajownia, TheTea, eherbata, and One Cup of Tea (this shop specializes in Nepali and Burmese teas).

Furthermore, there are more and more initiatives related to tea. One type of such initiative is related to tea festivals. The best-known tea festival among Polish tea enthusiasts is Svátek čaje, which is organized in cooperation with Český Těšín every year, usually on the first weekend of July in Cieszyn (a city in the southern Poland near the Polish and Czech border). During this festival, participants may try and buy teas as well as buy tea ceramics, participate in various tea workshops and drink tea with other tea enthusiasts. Another famous tea festival is Tea Festival called Zaparzaj, which is organized in Poznań every year, usually in September

[on the 15th to 16th of September, following that link; I'd best post this sooner rather than later]


Another type of initiative is related to groups of tea lovers who meet regularly to drink tea and talk about it. One such group is the Warsaw Tea Society. I am one of the founding members of this group and I am responsible for the English version of the Facebook page (that’s because of my profession: I am a sworn translator of English). As part of the Warsaw Tea Society’s activity we organize various meetings with people related to tea as well as workshops that are often combined with tea tasting. I know that there are also similar groups in Poznań and Wrocław.

There are also some events related to tea which are organized by such institutions as the Japanese Embassy in Poland and Museum of Asia and Pacific (both institutions are located in Warsaw, Poland). In the near future, on Saturday (8 September) to be precise, the latter institution will organize a meeting with Ayano Hirobe, a Japanese tea researcher.

[make that the recent past; there's always some delay in turning input into a completed blog post]


The first part of that event will be a lecture, during which Ayano Hirobe will present results of her research. The second part will be workshops combined with tasting of selected Japanese teas. These workshops will be conducted by Ayano Hirobe together with Toshifumi Shibamoto, a tea farmer from Shizuoka, Japan, who likes to experiment with his teas 😊. Shibamoto’s teas, especially his oolongs and greens, are well-known among Polish tea enthusiasts.


2) Two photos from a meeting organized by the Warsaw Tea Society in May 2018. It was about teas from three African countries: Malawi, Rwanda and Kenya. It was hosted by me 😊. The tea presented in the photo is Malawi White Peony (Thyolo Peony) from Satemwa Tea and Cofee Estate in Malawi. 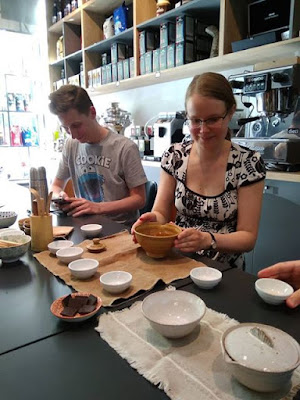 More from Agnieszka about tea blogs in Poland


In Poland, we have also some tea bloggers. Here is a list of the best, in my opinion, Polish blogs about tea (there are comments about some authors of these blogs):

5. Herbaciany Notes - Jola, author of the blog, recently has been in Japan, where she explored Japanese teas and participated in the process of tea production.

6. Dado - moja droga herbaty - Łukasz, author of the blog is a graduate from Korean Philology. His main area of interest includes Korean teas and Korean tea ceremony. His blog also has the English version.

7. Morze Herbaty - Ania, author of the blog, is a graduate from Sinology and a Taiwanese tea school. She is a Chinese and Taiwanese tea expert.

8. Cha-herbata - Robert, author of the blog, is a graduate from a Japanese tea school. He travels to tea-producing regions regularly. He is also the author of a famous book about tea named “Zapiski o herbacie.” In my opinion, it is the best book about tea in Polish.

8. Joanna Bożek o herbacie - Joanna, author of the blog, recently has been in Vietnam, where she explored Vietnamese teas and Vietnamese tea-producing regions.


As you may see above, in Poland there are more and more people who are interested in tea, for whom tea is not only a beverage and who try to promote drinking of orthodox loose-leaf teas of high quality.

A third set of photos she shared 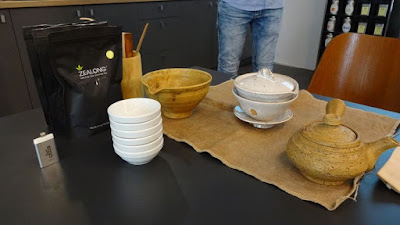 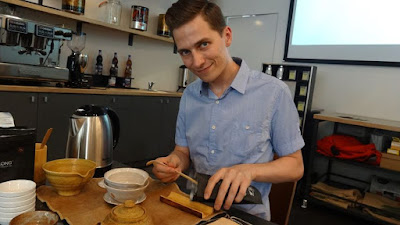 
It's amazing stuff, isn't it?  That's probably still not the whole story but it's lots of it in one go, far more for tea events and activities than occurs in Thailand.  They're definitely not just getting started on tea in Poland, a good bit ahead of my own exploration for having an entire local community involved there.

If anyone in these photos would like to be referenced I'd be happy to edit that in.  Or I'd be happy to just talk to people from there, even separate from the context of getting more input for a post.

Many thanks to Agnieszka for sharing all this, and filling in so much more about tea culture in Poland.