A friend passed on this tea in a recent visit to Bangkok (full name Feng Qing Jin Ya Dian Hong, from China Life).  It's a nice friend that gives you tea this good to try, an interesting and very pleasant Chinese black tea, with a style that doesn't really match conventional black teas.  I'll describe what it is more at the end, with a little research into the type and explanation of the name, but basically it's a buds-only black tea from Yunnan. 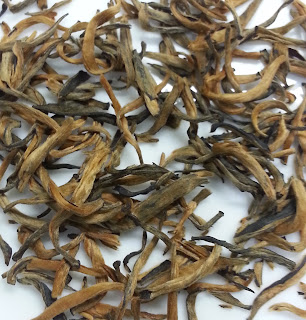 
The taste is just what one might hope for, soft, full, complex, a bit sweet, with a nice dryness to the feel, nothing questionable or out of place.  It works well to describe this particular tea as a list of flavors since there are so many to pick out.  So lets do that:  the package cites cocoa, malt, and hay, and this tea includes those as predominant elements, although malt seems to be used to describe a range of different closely related tastes in teas.  Flavor aspects also include yams, with just a hint of smoke, and I could swear there's a little vanilla in the background.  I'm not noticing pepper so much; maybe. 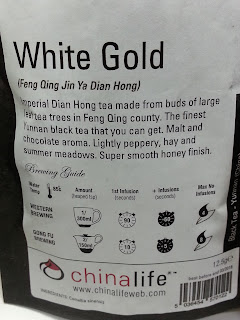 For me the sweet potato / yam range can be too much in some teas, leaning towards an artificial sweetener taste if too strong, but in this case it's all in great balance, all expressed as positive aspects that work well together.  I think there is even a mild mineral tone as a base flavor that helps it all really integrate, but that's hard to pick up, more like the context for the rest of the flavors.


It's the feel and balance that make the tea work so well though.  That slight dryness--nothing like astringency in typical Assamica black teas, although it is vaguely related--offsets a generally soft feel.  Along with that a nice sweetness brings all the aspects to a good balance.  I get the impression that the tea would deal well with being drank at different strengths, based on preference, working well quite wispy or standing up well to someone liking tea brewed strong.  It also seems like a tea that would be hard to screw up.


Some teas are difficult to brew, expressing a range of aspects depending on slight shifts in parameters, tricky to optimize, and this doesn't seem like that.  There seems to be no need to completely dial in approach, no astringency to brew around, no subtle aspects that are hard to draw out.  I guess one might see it as a trade-off that it's easy to get great results but capable of less variation.  For me it's really nice as it is so that's not really a trade off. 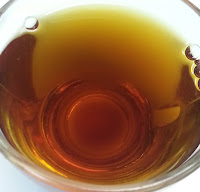 Seems too early to stop there, but that about reviews it.  From drinking pu'er lately I almost want to describe how the feel comes across within your mouth, where it's located, or how the aftertaste plays out, but those things don't seem to add so much (in general, for me, perhaps more than for this tea in particular).  For what it's worth I feel the tea more on the sides of my tongue, and a little in the back of my tongue at the end, which means nothing to me.  The taste does stick around after you drink it for a black tea, with that dry cocoa effect and a trace of yam sweetness lingering pleasantly. 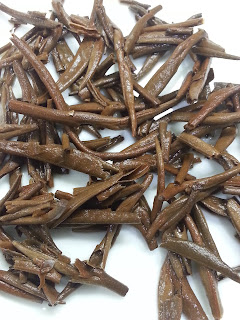 About brewing, it's pretty simple, still black tea even though it is from tea buds (more on that in the next section).  The one interesting twist is that it brews really nice later infusions, not giving up much at all in terms of that full taste profile, sweetness, clean flavors, etc.  As with Silver Needle style white teas it keeps on brewing nice tea.  After several steeps you need to go a bit longer on time, and that draws out a little more mineral and dark caramel flavor but that's really nice too, and the sweetness and clean-flavored effects stick around.


Even after white teas seem done, having brewed lots, you can draw out one extra one by cold-steeping the leaves again (or buds only, depending on the tea).  To do so you just put the tea mixed with warm--but not hot water--in the refrigerator for a good long time, and let it steep on it's own.  How long doesn't seem to matter, six hours or a day.  I didn't think to check if that would work with this the first time I made it; I'll have to.


Why not a bit more about the general type.  It doesn't take much reading around to get to the idea that Dian Hong can include buds and leaves, and Jin Ya Dian Hong is just the buds (kind of obvious the tea was that from looking at it), with Feng Qing as the location, a county per the China Life description.  Here's a bit on the type from Seven Cups (a vendor, who's version I've not tried before):


Yunnan Province first began producing black tea in 1939.... Jin Ya was invented in 1958 by Feng Qing tea company. Instead of using 1 bud to 2-3 leaves, they started picking only tea buds. Yunnan Province was the first place to make black tea entirely from tea buds. If left on the tea bush, healthy tea buds will open in to five or six tea leaves...  The tea master must completely control the oxidation process throughout every layer of the bud... Black tea that is too oxidized will be sour, and under oxidized tea will very heavy and tannic.


This version wasn't tannic or sour at all so I guess they nailed it.  Not really about this tea type but there's an interesting mention of an old tea tree, a subject that keeps coming up:


There is one famous tea tree in Feng Qing County, called “Xiang Zhu Qing Cha Zu”. It is the largest and thickest tea tree that has been found, and is protected nationally because of its botanical significance. This tea tree is estimated to be 3200 years old and the diameter of the trunk of 1.84 meters thick.


Good to know!  They should try to make pu'er from that (just kidding).  I noticed a Seven Cups guide for brewing Dian Hong Jin Ya on You Tube looking for a China Life reference for it there, but as the video describes there isn't much to it; it's black tea.  China Life does post a lot of nice brewing and type guides on YouTube, just not related to this type.  The tea works out well brewed Western style using boiling water, steeped for three minutes or so, then for more time for later infusions.  As with any brewing all of that could be adjusted for preference, shifting any parameters as one is inclined, but again it seems to me a strength of this tea is that you don't need to fine tune brewing conditions to get great results.

It would even be possible to brew this grandpa-style, to use unregulated infusion time, to just drink the tea as leaves mixed with water without separating them, but I wouldn't.  The tea is too nice when brewed to a good infusion-strength balance point to give that up.