Editing note:  a comment on the TChing version pointed out that the original recipe cited used a lot of sugar (3/4 of a cup for four cups of tea), and I might clarify that I used about a third of that, and made more tea.  Sweetening depends on preference but that version would be as sweet as a soda, which is far too sweet for me.


I recently ran across a recipe for Thai tea, a from-scratch version of the iced milk tea.  Here in Thailand that's often made from a powdered mix, artificially flavored and colored orange.  I researched the original ingredients once (here), and that flavored tea may have been made with orange blossoms and crushed tamarind seeds, but the modern version isn't clearly one thing.  Most variations seem to include star anise; beyond that they seem to vary. 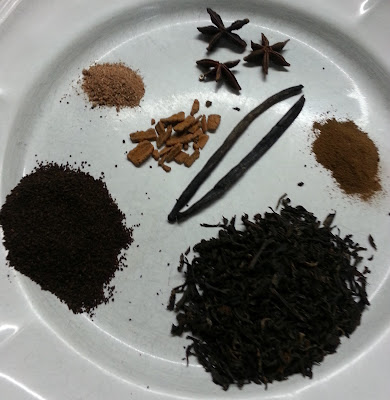 I usually don't address health claims related to teas, but it was interesting noticing that a compound extracted from star anise is used as the basis for making Tamiflu, per WebMD:


it [star anise] is a good source of shikimic acid, which is used in the manufacture of oseltamivir (Tamiflu), a flu treatment.


I can't imagine the few stars I used making much difference to my health, but it's quite rare to see a tea or herb component trace so directly to a derived medicine, so interesting in that regard.


That recipe was based on star anise, clove, and cardamom.  I have those at home, but the last two only as spice jar ground versions, not whole fresh spices.  I also added a little cinnamon and vanilla bean, and used two types of loose black tea.  I'll mention that original recipe here for reference, although not much of what I used was a close match:


The recipe had called for black tea bags; best to just ignore that and anything it might imply about where that source stands related to loose tea.  A friend had passed on some CTC Assam not so long ago (which I've not yet tried alone, but it smells earthy and smoky), and I used a Wild Boar black from Hatvala, a Vietnamese black tea.


That Vietnamese black tea is a better version than one would usually blend with, sweet and soft, complex, with some fruit and a little earthiness.  I used palm sugar instead of white sugar, and less of it.  Palm sugar tastes about the same, maybe just a little towards how sugar cane juice tastes, less refined.  The recipe called for half and half, which would have been nice, creamy, but since I only had whole milk handy I went with that.


For brewing technique I boiled the tea and spices for about three minutes, let it sit ten minutes, and re-boiled briefly and let sit another ten minutes.  All that is really borrowed from standard approach for masala chai (with earlier posts on making that here and here), although their instructions were similar, one boil and a thirty minute steep.

The sweetness level wasn't right, after trying the tea with milk and ice, so I strained the tea and re added a little water, re-boiling with more palm sugar.  After a long steep the black tea aspect was a bit lighter in that second batch compared to the clove and anise, so I mixed the two infusions.


It's probably the best Thai iced tea I've tried, not that I drink it very often.  Of course it wasn't orange.  That color is from food coloring in commercial versions.  The recipe article pictures bring out more orange by leaving the black tea and white milk in separate layers, and where it mixes at one point it looks orangish, but the blend just looks like black tea with milk.


It tastes like those ingredients, with a good balance in terms of choices and relative levels. The smokiness of the black tea added a very subtle aspect that combined well with the others.  I've made a masala chai before with Lapsang Souchong that had a similar effect (mixed with another black tea, to moderate the smoke level).


Adding cinnamon and vanilla did pull it towards masala chai; it was just missing ginger, and maybe black pepper, used in most versions.  It was quite light on cinnamon, by design, not really intended as a main aspect.  It would still work well without vanilla beans, although those do add lots of complexity, and a cool thick feel to the tea.  It would also be fine with twice as much star anise or clove, pulling the flavor in either direction.  I do like a little salt in masala chai, which doesn't show up in every recipe, but that doesn't seem to make sense for this blend, so I would agree with that recipe version in leaving it out.  Any version with sugar and milk, as both Thai tea or masala chais typically include, takes away some concern over astringency and spice flavor balance, since those tend to compensate.

Two of the other relatively fresh versions of Thai tea I've tried were from commercial blends, one made in a cappucino machine (apparently not so uncommon here) and one in a capsule format coffee maker.  They were better than they sound.  A twenty second brew process really shouldn't work well, but apparently they had tweaked the spice blend and grind to work out, or at least to work out as passable.

From experimenting with a Christmas tea blend version last year (here) I think a bit of dried orange rind might work in this Thai tea.  That's easy to make, using a peeler to strip off a thin outer skin layer from an orange, then drying that in a warm oven for a half hour.  Or any number of adjustments might work well, different fruits or spices, which is the nice part of making naturally flavored tea blends, it's easy to make variations according to preference.

Aside from mixing interests in cooking and tea I really don't love flavored teas, or drink many, but they're worth making since I do like the process of experimenting as much as the tea.  It seemed a lot of messing around just to make a flavored iced tea but it would last a few days refrigerated, and it is something different.
Posted by John B at 9:53 PM